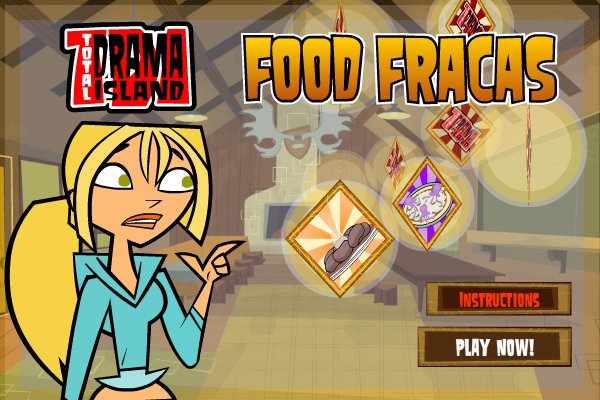 Overview:
Total Drama Island is rife with stereotypical teenage archetypes and for a show about those teenagers being on a reality game show, that’s just about right.  The show itself parodying reality game shows adds that bit of extra humor required to make for an interesting series.  Making flash games for the show wouldn’t seem that difficult to pull off either as parodying reality game shows means that a game can simply be based off of almost any of the challenges featured in the series.  Better yet as the cast of contestants numbers more than 20, featuring different the best fit wouldn’t be too hard either.  Though it really comes down to how well the challenge can translate and how fun it actual is, as to whether this is a game to play or pass on.

Story:
Total Drama Island: Food Fracas is most generally based on the episode “Brunch of Disgustingness”, where, like many reality game shows, the contestants had to eat a variety of disgusting food for a challenge.  Being of course a parody, the foods served are far more foul than anything that would actually be served to real people.  The game focuses on the character of Bridgette, though this is mainly so that she can simply react to how truly gross the foods appear, but the host Chris does pop in to start and end each round because otherwise what’s the point in having a host. 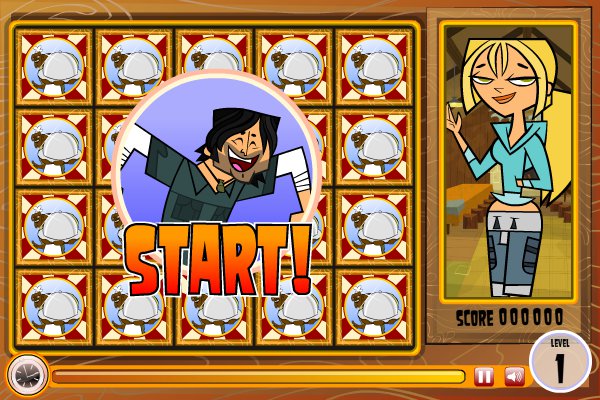 Unfortunately, that’s all the game really has in terms of story as the game itself is simply a card match, where players match the revolting foods on the cards.  Which is really a shame, as a little more could have been done to bring it either closer to the episode or the mood of the show, if winning showed off Bridgette winning a prize for getting through it all.  Something, anything more than just letting players submit a highscore.

Gameplay:
As stated before, the gameplay is pretty much entirely a match card game.  The game starts with a field of 20 cards and players must click and flip them over to try and find the matches.  Obviously not that big of a challenge, so to make it at least a little bit harder a timer bar dwindles away to try and keep players on their toes.  Subsequent levels will also yield a faster timer though, making it even more difficult as players need to get matching quicker.  Thankfully, making a match will reward a scant bit of time back onto the timer bar to aid in keeping players low on time a bit more afloat. 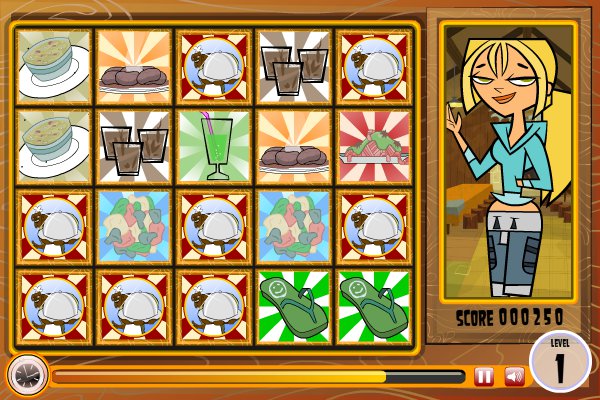 The field of cards isn’t always 20 cards however, going beyond just matching the 10 different putrid foods, the last two levels broaden the field to 30 cards and adds in cards with 5 of the better known contestant/characters on the show/series.  Suddenly having 10 more cards and 5 more pictures to remember between does ramp up the difficulty a bit especially with the reduced timer bar to deal with.  This turn a pretty easy objective into a somewhat more frantic challenge that should definitely challenge a young crowd, though if they aren’t able to get through it on the first try, they are able to restart the level again to try and learn from any mistakes and do better.

Audio & Visuals:
One would hope that with such an interesting cast of characters, it wouldn’t be too hard to pull off at least some dialogue for the game.  Unfortunately though, neither of the two characters featured say a single word throughout the game, which is kind of disheartening especially with how easy it would have been to do at the very least dialogue for Chris bookending each level from clips from the show.  Likewise with the subject matter, one would think that there would be plenty of voice clip material from the “Brunch of Disgustingness” episode of reactions to the different foods. 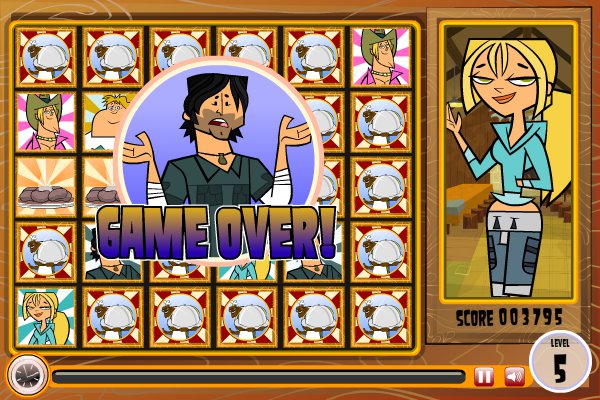 Music on the other hand, perhaps players should be glad that at least there are two songs in the game.  One for the menu and one for the actual gameplay.  The menu music is pretty close to fitting the idea of music that the teenagers from the show would listen to, but that doesn’t mean it won’t get on players nerves, luck though then players shouldn’t really be on the menu all that long anyway.  The music for the gameplay does give off that realty game show vibe, though the loop is pretty short for having to hear it through the 5 different levels.  With a lack of dialogue and only really sound effects and music, this is probably one for just setting to mute if not feeling the music. 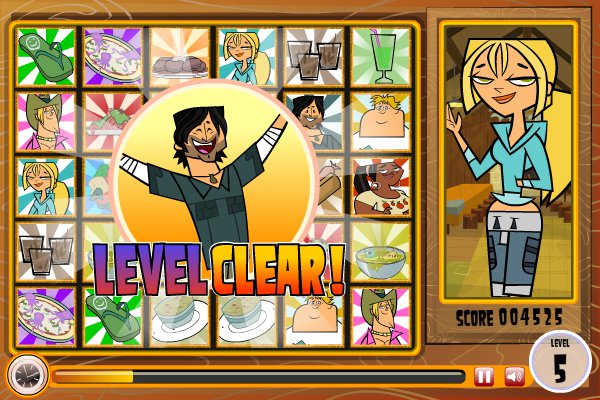 The visuals of the game are pretty spot on with the show, but I suppose almost all of the assets would have been straight from the show itself, so that’s just a matter of grabbing them.  Being a pretty simple game there isn’t much done with the visuals themselves, so at best it’s nice to see the 10 disgusting foods, though a nice touch that some actually have flies animated and going around the food on the cards.

Overall:
Total Drama Island: Food Fracas is more or less a Total Drama Island branding of match card game.  It does get to a fairly challenging point in terms of gameplay in the later levels, so those looking for that kind of a challenge would definitely find something here.  Those fans of the show though might be best to pass, unless looking for a match card game or maybe wanting to check out the food from the challenge again, because how can one really say no to a hot dog made out of dolphins.  I give Total Drama Island: Food Fracas