Stop Those Fish takes the simple concept of simple, yet well-polished, finger-swiping mechanic and puts you in the shoes of three seafaring bears who must stop an invasion of wave after wave of diabolical fish. Does the application provide enough depth to support the basic gameplay, or is this a ship bound for the grizzly (pun intended) deeps of the ocean? 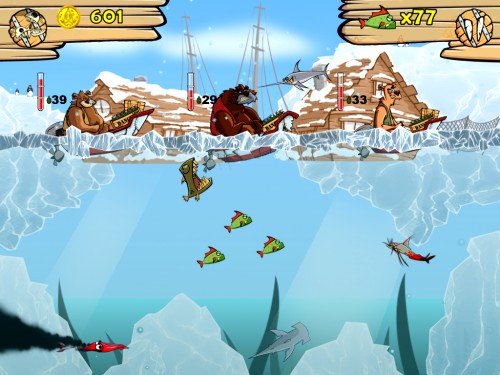 So how do three cartoon bears on a two-dimensional plane stop the maniacal and imperialistic fish horde, you ask? Why, with humanity’s most effective fish-killing weapon: dynamite.The mechanics that drive Stop Those Fish are quite simple. Each bear’s boat has a limited stock of ammunition. As fish rise from the bottom of the screen to the top in an effort to destroy the three heroic grizzlies, players drag their finger from one of the boats to the area below them. These targeting lines can be curved, zig-zags, whatever. If you can draw it in one finger swipe, it’s fair game.
Once the line is drawn, the designated bear throws dynamite along it, and if there are any fish in the way… Boom. Killing multiple fish with one stick of dynamite is rewarded with extra in-game cash and conserves ammunition; ammunition which becomes a priceless commodity as the game progresses. As you go through the game’s over 50 levels, fish become progressively more erratic in their movement, making them much harder to hit, and this increased challenge is welcome as you’ll find yourself breezing through the earlier levels of the game. Between levels, you’ll be able to spend some in-game coin to upgrade the bears’ boats, buy more ammunition, or repair damage the boats have previously sustained. 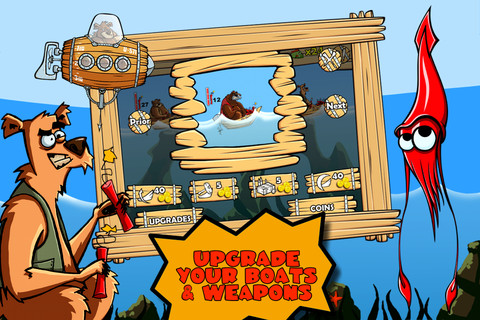 The issues begin there. You see, even if you’re spectacular at racking up combo-kills during the course of the game, there’s very little chance that you’ll gather enough coin to support an extended campaign against the marauding sea creatures. You’ll find yourself running out of ammo, being unable to afford ship repairs, and just generally marooned with no help in a sea of angry fish people.

That is, unless you elect to spend some real world moolah to increase your in-game money pile. Stop Those Fish is almost arcade-esque in the way it provides an insurmountable challenge which essentially requires that players lay down some real-world cash to progress. Ironically, because the game has little to offer in the way of replayability, this push for real money transactions seems like even more of a cash-grab. There’s no three-star system like many iOS game have implemented, and there are no collectibles. Once you’ve beaten the game, that’s pretty much it.

The unlockable Dark Mode and Cage Mode provide fun diversions to this problem, but they do not solve it, as they too can be finished with little to show for it.

In the end, though Stop Those Fish‘s gameplay is finely tuned and simple, the game does not quite provide enough depth to encourage players to come back again, even if they have spent money in game. 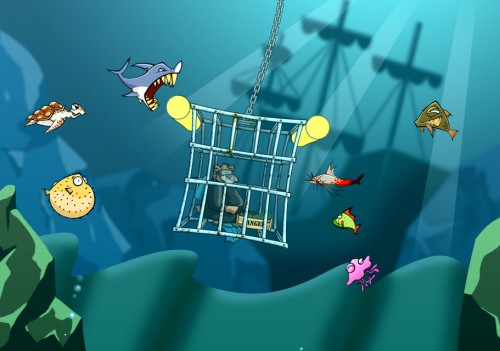 Graphically the game has a lot of character. Let’s face it, even with the oversaturation of two-dimensional cartoon games on mobile platforms, it’s not every day one of those involves bears travelling the oceans of the globe and blowing up anything with gills. While the style may not be all too unique, the art design and concept behind the game keep this latest batch of cartoon animals from becoming one of the lifeless cartoon clones seen elsewhere on the platform.

The music for the game is catchy, but, as there’s just the one track, it begins to get repetitive if you’re on a long run of play. The sound effects are decent, but I’d always imagined dynamite would pack a bit more of a punch when it went off. 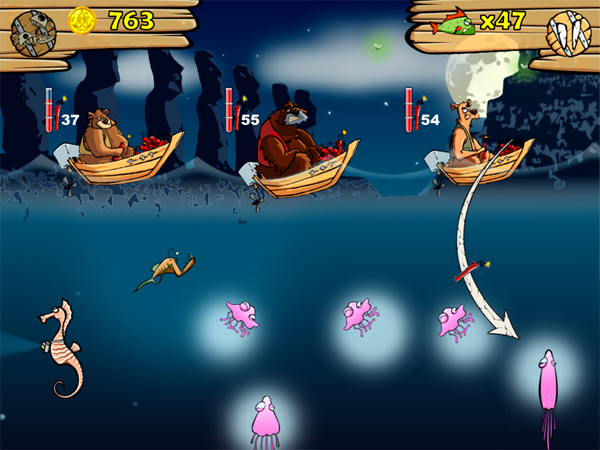 Stop Those Fish is a game whose positives are excellent, but whose negatives are big enough of a hindrance to stop the app from achieving greatness. Though the controls of the game are fine-tuned to perfection, the shallowness of everything on offer is felt almost instantaneously, and the reliance placed on real money transactions by the developers feels like a kick in the face for anyone who downloaded the game hoping it would truly be free.

That aside, the worst the game can do is take up your time, and even if you only spend twenty minutes with it and never play it again, those are twenty minutes you’ll probably enjoy.