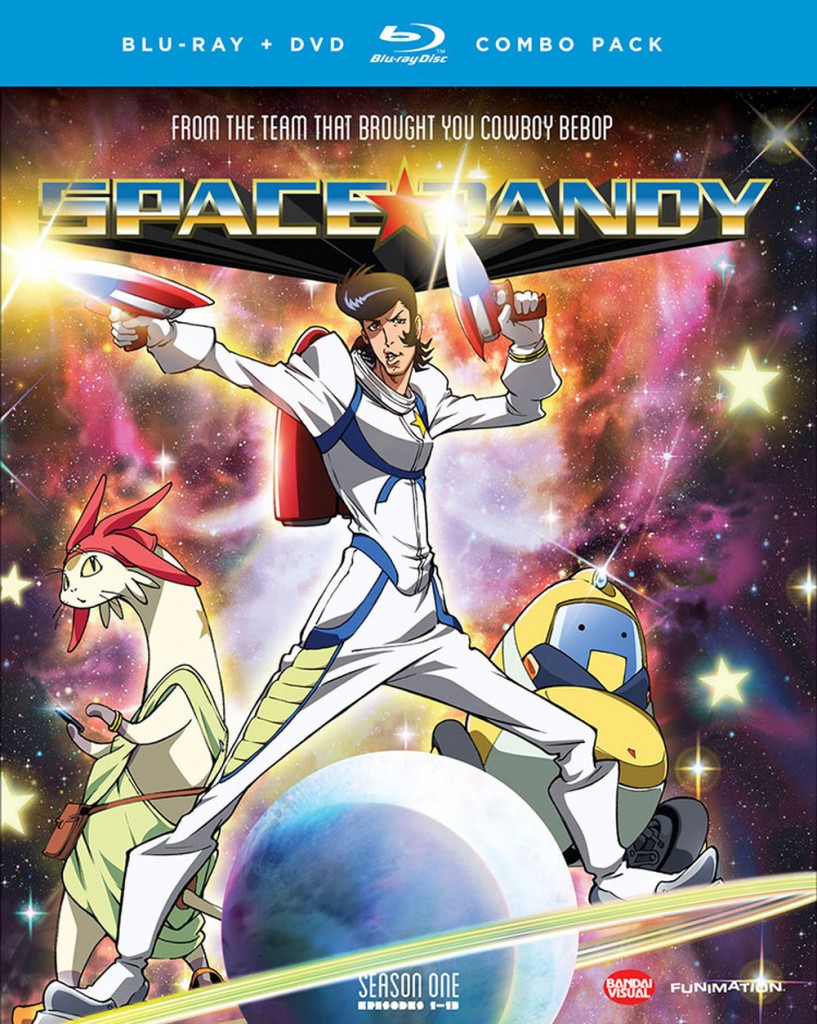 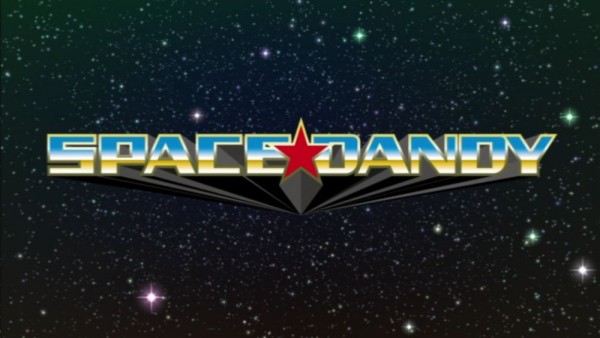 Space Dandy is about “a dandy guy…in space.” The dandy term is relative however. Space Dandy brings to my mind the zanyness of a show like Excel Saga mixed with FLCL…though very much without FLCL’s deeper sophisticated plot. Essentially Space Dandy follows the wacky misadventures of a human, called Dandy, a rundown robot named QT, and an cat-like alien from Betelgeuse nicknamed Meow. There are shades of Cowboy Bebop floating around in the ineptitude and goal of the Aloha Oe‘s crew as they fumble through space seeking to capture new aliens for rewards. 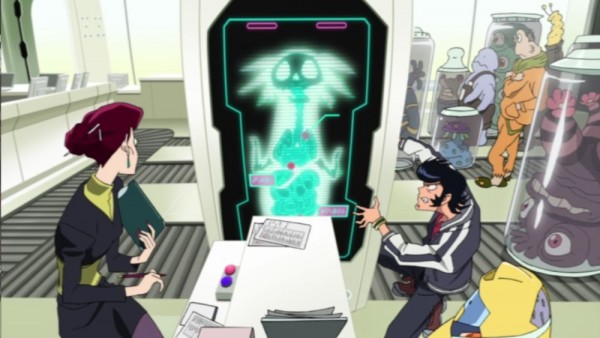 The story of Space Dandy was surprising at first. The story isn’t a linear telling of a single narrative following the Aloha Oe‘s crew to any deeper sort of story arc. Rather, the zany antics of Dandy and his crew are told in a number of isolated tales that often have no bearing or impact upon each other. In fact, only two of the stories seem to make an actual lasting impact on the series at large: the somewhat unwilling recruitment of Meow to the crew and Dandy’s erstwhile love interest Scarlet the alien inspector.

The basic rinse and repeat plot that motivates the crew of the Aloha Oe is the hunt for unregistered aliens. Much like the Cowboy Bebop, Dandy and his crew roam around trying to catch aliens for bounty rewards. They usually meet with very little success, with various aliens turning out to not be aliens, escaping, or even just being let go. Sometimes this gets changed up for an episode to focus on different things, but this is the main characterization behind Dandy and how he behaves. 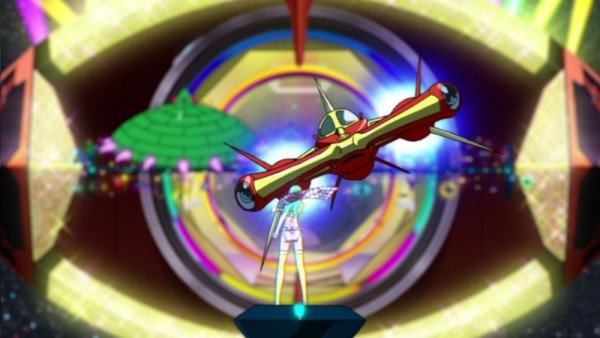 Many of the episodes end with the crew dead in some sort of way. This is thanks to the loose continuity, which barely ties anything together. Until I realized what kind of slapstick show this really was, it seems to be a very poor choice in storytelling. As I watched it with a friend, we started discussing the issues and poor storytelling within the series. But really, this isn’t the show for a hard science fiction fan to enjoy.

So what does Space Dandy bring to anime fans? What Dandy and his crew bring is a series of enjoyable one-off (mostly) episodes focusing on different narrative tropes. In one episode we see everyone in the universe becoming a zombie and the fallout, only for everything to be reset for the next story. In another, it’s a blatant rip off of Groundhog Day mixed in with the Japanese idea of struggling to succeed and take over the family business. Space Dandy chooses to explore many different styles of sci-fi narratives within it’s own stylized universe. 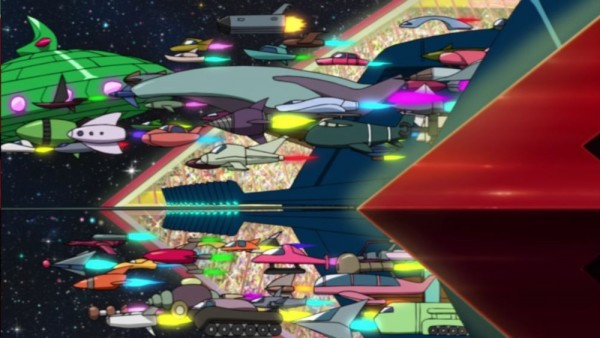 The visuals for Space Dandy are unsurprisingly high quality. There is a lot of detail and attention paid to the surrounds, whether the Aloha Oe is exploring ramen shops or just stopping in on Betelgeuse for repairs. Unlike a lot of modern anime, the styling is unique and fresh, with a lot of high quality backgrounds and character designs. The number of unique designs and layouts isn’t too surprising to see coming from Bones. 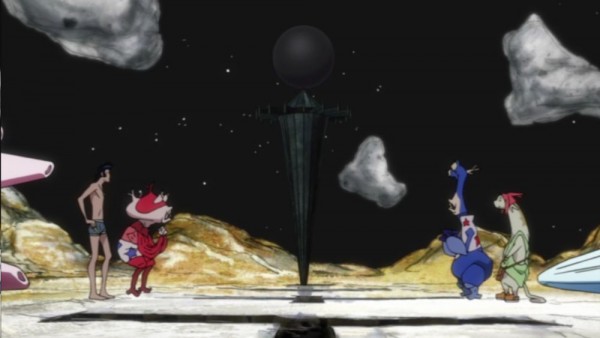 The Blu-ray’s are obviously higher quality than the DVD’s, but both show the crisp and fluid animation well. There’s a lot going on in every episode of Space Dandy and references abound, hidden in the background. The depth and detailing even of simple things is well done, and the art quality of the show is to be commended. 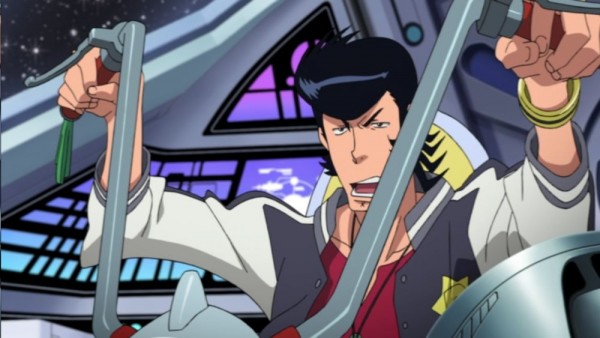 Space Dandy comes with two audio tracks, Japanese and English. Both audio tracks are surprisingly 5.1 audio tracks. It seems interesting that more and more anime is moving towards surround as opposed to the traditional 2.1 channel. I didn’t really notice a huge difference in quality down sampling to 2.1. Obviously the track isn’t optimized around the listener.

The actual soundtrack to Space Dandy isn’t standout. It’s well done and works for the series, but it lacks it’s own voice. It’s just not special. That being said, the voice tracks are well done. Space Dandy‘s Japanese Cast works well, as does the English cast. While I didn’t like that QT was effectively autotuned in the English cast, it did give him his own unique voice. I felt that the voices for either cast were well done and enjoyable in their own way. It was a nice change of pace and let me enjoy the visual nature of the show just that little bit more when watching in English. 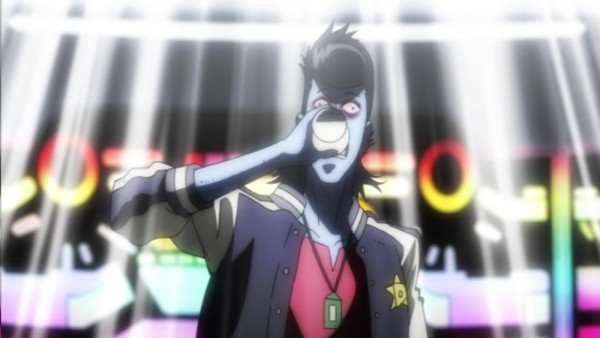 The extras offered on disc aren’t anything special. Like most anime you’re receiving the bare minimum; some trailers and clean openings and closings. There’s a commentary for episode 10 as well, but like most anime there is very little offered outside of the actual episodes.

The best feature I saw from this set is something I’ve been wishing to see for a long time. Space Dandy includes a special mode to watch the episodes called “Marathon Mode.” What this does is it plays the intro and the closing for only the first and last episodes respectively, and cuts out the teasers for next time. This allows you to watch the discs in their entirety without having to do any manual skipping. It’s something I hope to see adopted more widely, especially for anime with a stronger narrative. Watching something like One Piece without needing to skip each opening and closing would be amazing. 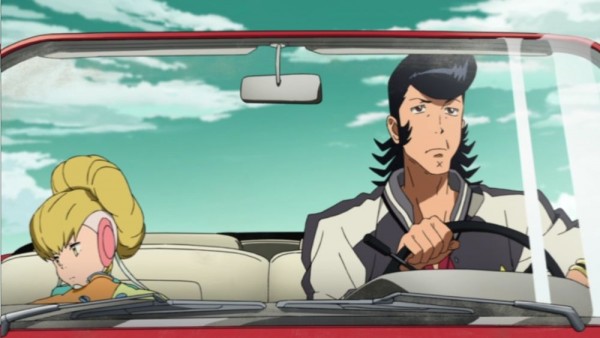 What do I think of Space Dandy? I’d say Space Dandy is a fun romp but not exceptionally so. It’s an enjoyable look at Japanese comedic portrayals of different science fiction tropes and styles, but ultimately only good for laughs. If you’re looking for a hard sci-fi series, or even a comedy with a strong narrative, then you might want to look somewhere else. 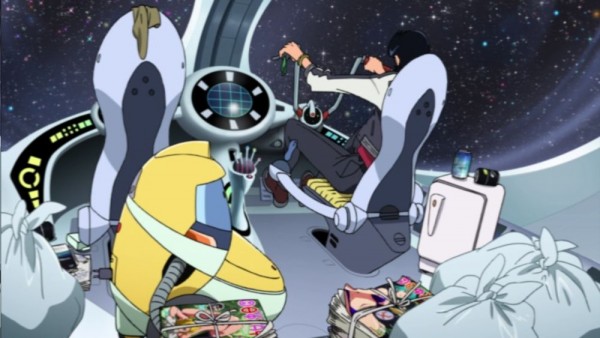 That being said, Space Dandy is a good show, and well made by Bones. Funimation has done a good job with the dub, making this enjoyable for a wide range of anime fans. I enjoyed some of the characterizations and the takes on various science fiction tropes. I would recommend giving this a watch as long as you don’t take it seriously. If you liked Season One of Space Dandy, be on the look out for Season Two!