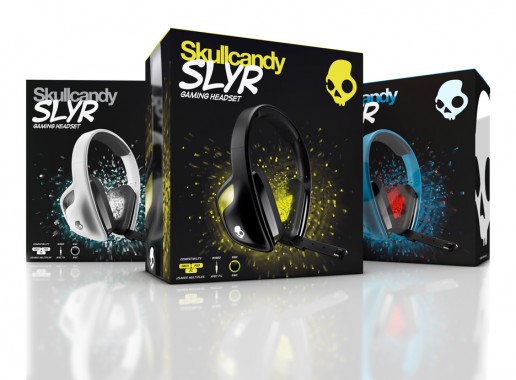 With Skullcandy’s acquisition of Astro Gaming a while back, a lot of questions were thrown up in the air about Astro Gaming’s future. It seems that Skullcandy has maintained the Astro brand for high end professional gaming audio and started a Skullcandy gaming line for a more affordable consumer line of gaming headsets. The SLYR is Skullcandy’s first headset and is a wired stereo headset that supports the Xbox 360, Playstation 3, PC, Mac, and most mobile devices.

The SLYR is extremely light and rather small. It is an over the ear type headset, however those with extremely large ears may find the headset fitting rather tight. Vertically, there is plenty of room in the padding, but is rather small width wise. If you can get your ears into the cup than you will find there is extra room inside to fit well. The SLYR is extremely light, allowing for long term wear comfortably. However the padding is a little stiff. When it warms up a little, the padding does become a little softer. Thankfully the light weight makes the stiff padding tolerable. The ear cups are covered in a soft material similar to the Astro A40s that is very comfortable and wicks away sweat well. There will be no problems with extremely sweaty ears as the material breathes extremely well. 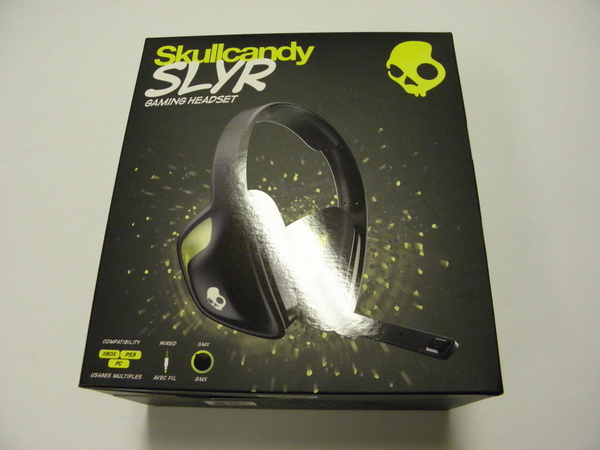 The microphone is a little stubby, but folds in neatly. When folded it, it is impossible to see any trace of the microphone making it ideal for taking the headset out on the road. The recording quality is excellent. Everyone who listened to the microphone over VoIP applications agreed the quality was clear. Due to the short size of the microphone, a pop filter is unnecessary as it is well out of the way of the mouth and nose.

The headphones sport a replaceable 4 pin short cable that is long enough to reach a mobile device comfortably. Cables tend to be chewed up easily and this is easily replaceable which makes it a boon for pet owners who like to chew on cables or those who have a tendency to be rough on cables. This short cable is plugged into control hub that is connected to a longer and extremely thick. The hub has controls to switch between the EQ settings, volume levels, game and voice balance, microphone mute, and a jack for the Xbox Live chat cable. There is a square switch that moves in four directions to control the volume and the balance between the game and chat volume, pressing down on the button mutes the headphones. A square blue LED that surrounds the switch blinks to signify which function was engaged and when the button is pressed down, the LED turns red to signal that mute is engaged. The LED is bright enough to be noticed in a lit room but soft enough to not become distracting in the dark. 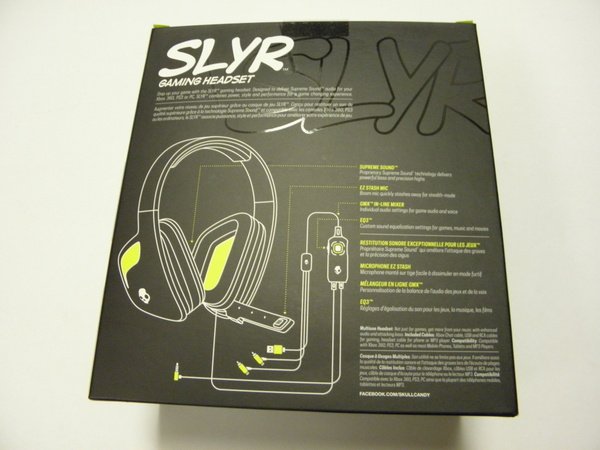 The EQ is controlled by a beefy three position switch labelled 1/2/3. Each one represents one of the three EQ modes. I would have preferred to see a small label for each EQ setting instead of a number; this is a very minor complaint as it is easy enough to remember each setting. The only real issue with this cable set up is the length of the first cable that goes from the headphone into the in line remote. The length makes reaching the control hub a little unwieldy at times. This is a trade-off to allow the SLYR to be used with mobile devices comfortably, but for those using the SLYR exclusively for the console or the PC, the hub can easily fall off the lap and fall between a couch cushion which can press a button accidently. A small clip to attach the hub to an article of clothing would have been a welcomed addition. 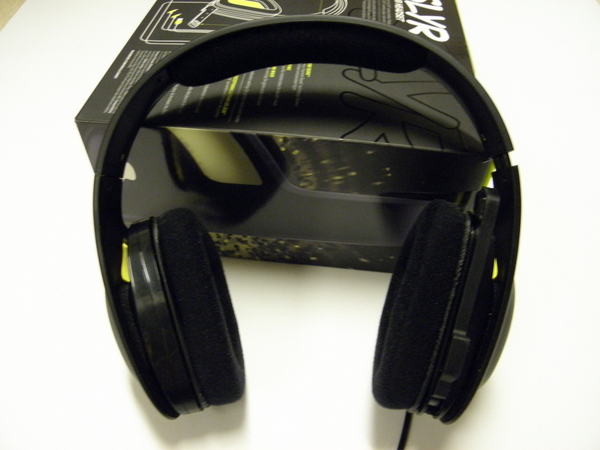 The SLYR connects to the PC via USB cable and has no control between volume and game volume. There are no drivers to install on Windows 7, simply plug and play. For the Xbox and Playstation 3, you will need to plug in the RCA cables into the red and white RCA cables coming out of your console. The plugs are pass-through plugs allowing the SLYR to be plugged into the TV then the console cables plugged into the back. Simply mute the TV and put on the headphones for gaming without disrupting your roommates. Alternatively, plug the SLYR into the TV’s RCA outputs for greater audio control.

I personally found the sound quality on the SLRY is outstanding. The audio quality takes a page out of Astro Gaming’s reputation for high quality gaming headset audio quality with a distinctive Skullcandy twist. While Astro’s audio tends to focus on clarity and precision at the cost of bass reproduction, Skullcandy SLYRs has the classic Skullcandy thumping bass married with Astro’s precision. For the price point, the audio quality is extremely clear and the bass well balanced. Although the bass is extremely strong and crisp, it never over powers or disrupts the highs and mids. Usually gaming headphones are notoriously bad for muddy mids and highs, but the SLYR performs well.The sound stage of the SLYRs were pretty good when using the included cable. Although I could tell I was hitting the limits of stereo headset forRevi pinpointing the directionality of sound when playing Black Ops II, plugging the SLYR into my Astro Mixamp made the SLYRs shine. Overall, I was extremely impressed by the SLYRs audio quality. 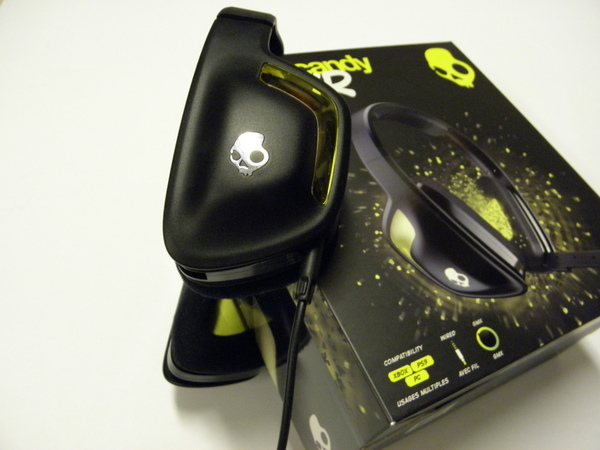 The Supreme Mode is a perfect balance for all around use. The Precision mode bumps up the highs and mids for better pinpointing of footsteps and gunfire in first person shooters. The Bass Mode lives up the name and turns the already strong bass performance into almost skull rattling levels. I found the Bass Mode best left for hip hop, rap, and dance music as the level of bass overpowered everything for most applications. The Precision Mode was helpful for first person shooters, but once again it seems to be a very application specific mode. I found some modes caused an initial hiss of white noise that is noticeable when it is very quiet or silent. Switching around the modes a few times seemed to have removed the initial hiss. 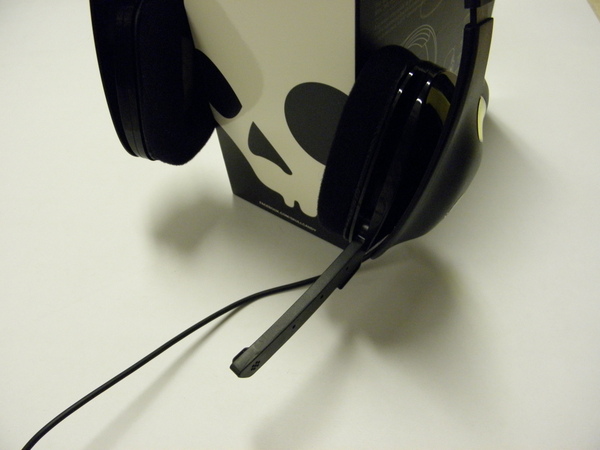 At $79.99 USD, the Skullcandy SLYRs are an excellent addition to the Skullcandy/Astro Gaming line of products. It is clear Skullcandy made an extremely wise strategic move in purchasing Astro Gaming. The SLYR is an incredible sounding headset priced appropriately at the slightly higher end of stereo headsets. Although people with larger ears may want to see if they can try the headset on at the store before taking the plunge, the Skullcandy SLYRs are reasonably comfortable and extremely light. If you are not ready to take the plunge into surround sound ready headsets, the SLYR is highly recommended as your best option.