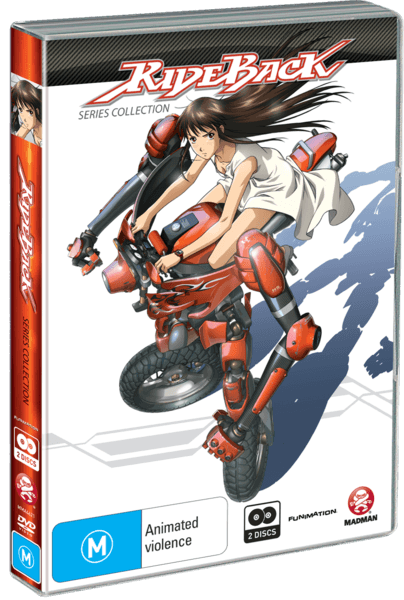 Ballet, Motorcycles and Mechatronics. Rideback. That is all

Seriously though, Rideback is an amazing Anime series that should be seen by all Anime fans/ Otaku at least once in their lifetimes. It is seriously that good. From the awesome mechanical designs, to the Mach-Rider-esque theme song, Rideback carries an awesome tune the entire way through… well, most of the way through anyway. “What’s this!?” you might be wondering; read on to find out more.

Rideback follows the various exploits of the Rideback club, and its newest and most important member Rin Ogata. The story takes off when an ex-ballet dancer, Rin, is attending a college and is drawn into the Rideback Clubs garage during a downpour of rain. Soon Rin finds herself atop a legendary Rideback known as a L-Type Fuego, which apparently means fire, and with it she becomes a great Rideback pilot. 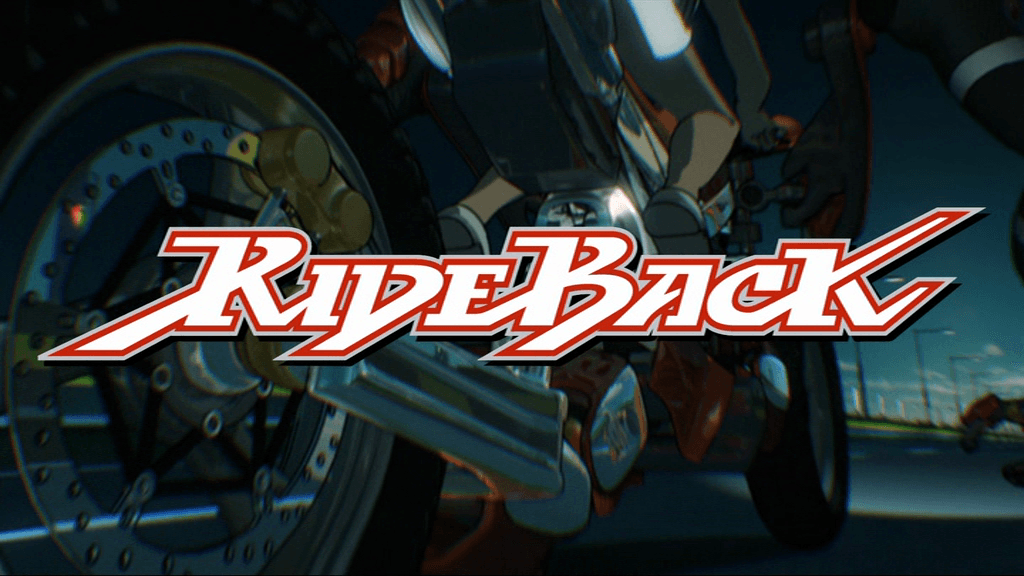 What I found strange about the Rideback Anime’s story is that the Fuego and Rin’s bond is absent for nearly an entire half of the story. You see them both grow and conquer so much together in the first few episodes that it gives you this impression that they’re going to take the center stage throughout the entirety of the series. And, as I’ve stated, this is not the case. The story quickly becomes a poorly rounded saga of life under a strict military rule, some Ridebacks are shown to be fighting this regime, but you ultimately don’t care about them, their riders or any of it really. What you’re promised at the start is not what you end up with and it makes you feel ripped off.

This is especially true with this one character who seems as though they’re to become a love interest to the protagonist, only to have anything to do with him scrapped until the very end. There is no romance, it’s set-up to be the beginning of one, but there’s no pay-off. I’m kinda glad, as I didn’t like the character all that much anyway.

It really irked me that from the mid-point onwards, Rin barely touched a Rideback (she maybe handled two of them for very shorts amounts of time) and any time a Rideback vehicle was shown; it was holding a gun and walking. The beginning of the series started with an awesome concept, fast races and a personal tale of growth and fun, whereas, the series quickly declined into cheap drama and a very poorly thought-out military concept. 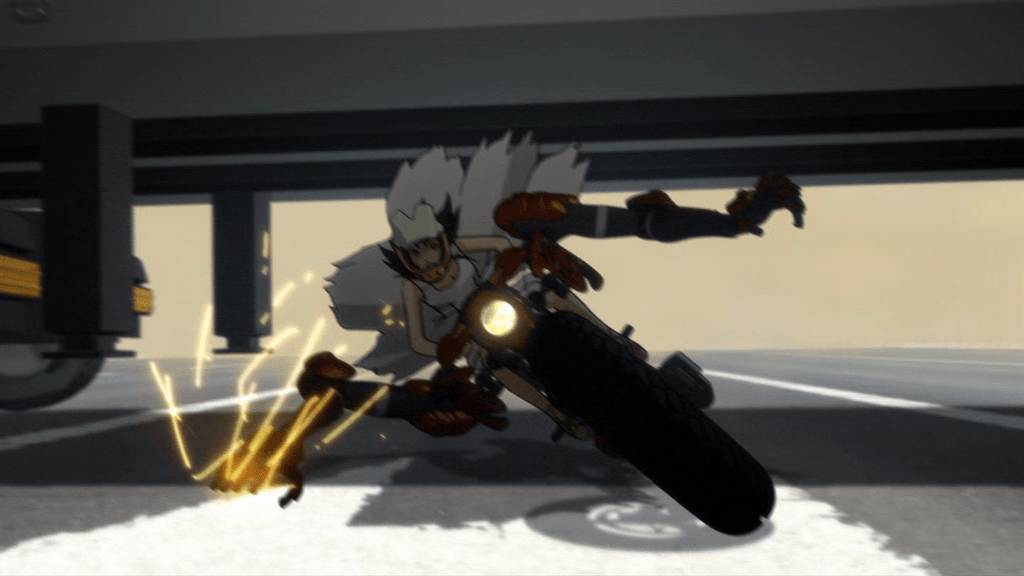 I know it sounds harsh to be compaining about such a prominent part of the story, especially since it had played a part since the beginning, but it was ultimately the racing and the incredibly well done action scenes mixed with amazing characters that sells you on the series. The story just does not head in a likeable direction after it’s sucked you in. If you want my opinion on this, watch the first half of the story and then make up your own ending. But, if you’re anything like me, you’ll become invested in the characters and continue watching just to see what happens.

The quality of Animation within Rideback is superb. Handled by one of the best Anime houses in Japan, Madhouse, every scene is incredibly smooth, nicely detailed and blended incrdibly well.

I’m going to be honest here, I absolutely hate CGI in my Anime. It looks cheap, it’s generally out of flow with whatevers happening around it and it usually sticks out like a sore thumb; so you can imagine how dissappointed I felt when I looked at the back cover and saw CGI motorbike-mechs. However, once I started watching the show, I found that I absolutely loved the way they had animated each of the vehicles within the series. Madhouse had managed to blend the vehicles into the scenes so well that I didn’t care/notice that there was CGI in my Anime. 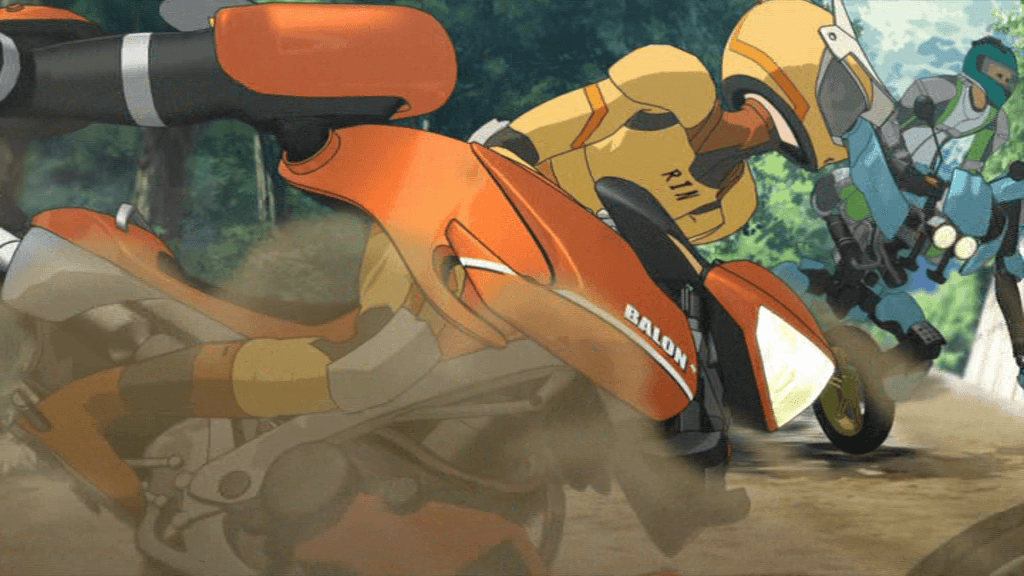 The one major gripe I had with the animation is that one of the main characters, Shoko I believe, had this weird thing where she appeared to have one tooth for the entirety of the series. I swear, mouth opened or closed, that one tooth was ever present, always protruding, never desisting. It wasn’t that bad a distraction, but it did give me the impression that she only really had one tooth, maybe she does? It is never discussed.

Rideback has, quite possibly, one of the best Anime soundtracks that I have ever heard. The opening theme is very reminiscent of the old videogame Mach Rider, as are many of the tracks found playing in the background of the series. If you’re someone who enjoys Anime soundtracks, you’re going to love a huge number of pieces from this show.

Counter to what I just stated, though, is that Rideback also might have some pretty terrible tunes playing in the second half of the series. While they’re not so bad that they detract from the experience, they’re just not as dynamic as the soundtrack used in the first half of the 12 episode series. 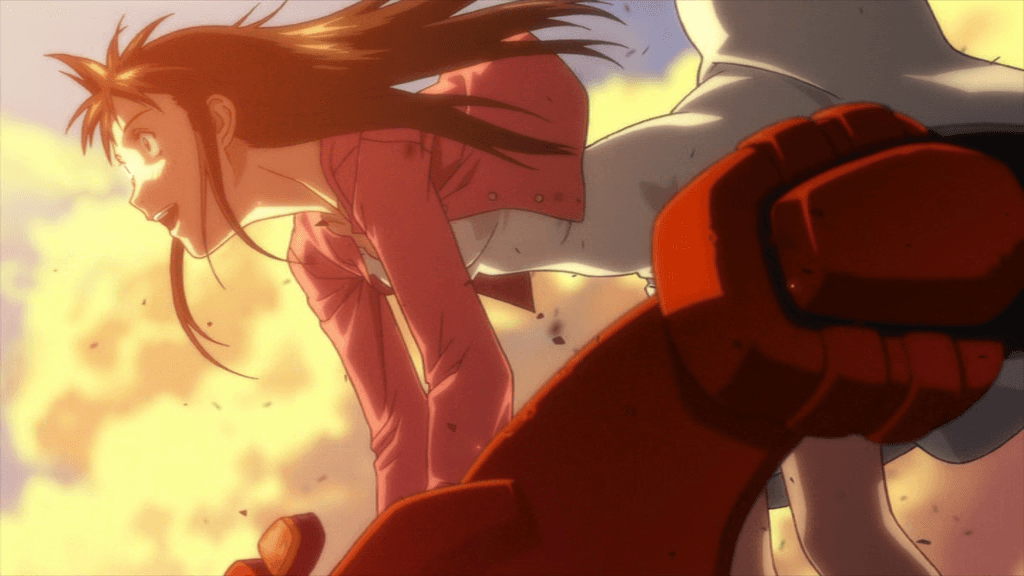 As with any Anime release, you’ll get people asking ‘which is superior, the dub or the sub?’ To them I say, ‘Watch it the way you want to.’ There wasn’t really that much of a quality difference in audio between the Japanese and English dubs. Or at least, I’d like to say that. However, in Rideback the 5.1 channel English track is far more superior to the 2 channel Japanese track, regardless of language preference. I also found the Japanese track to be mixed at a much louder volume level to the English track, which hurt my ears a bunch while switching through during playback.

My one major complaint with the Audio does not have anything to do with audio fidelity, it has more to do with accuracy. Early on in the series, many of the characters can be heard spewing various internet memes during regular chat. My main gripe is this one line from the first episode: “[…]Rin doesn’t confident in the way that she dances…” Please, no. So I hear Rideback is cool, she is motorbikes and doesn’t afraid of anything. It’s bad enough that I have to listen to this kind of babble at conventions, I don’t want to hear it in my Anime as well. While the other meme’s are a lot more subtle, they are still present (particularly early on) but they do seem to dissappear by the time the second half comes along.

The absolute best part about the audio though. The opening theme song was recorded by MELL, who also did the opening theme “Red Fraction” for the Anime series Black Lagoon. The theme for this series is Rideback and carries the feel of the series accordingly. 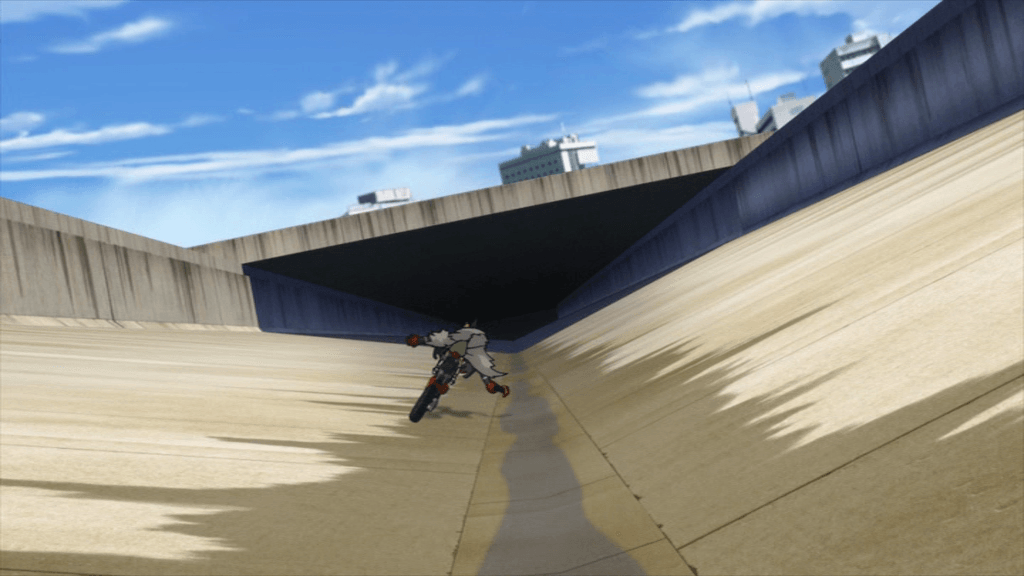 Rideback comes along with a small selection of Special Features across both of it’s discs.  These range from standard, to out of the ordinary, but still seemingly standard.

Of main interest within these features are the two commentaries, one on each disc, that cover the content of the episode they’re about. The commentaries are on both Episode 4 and Episode 10. 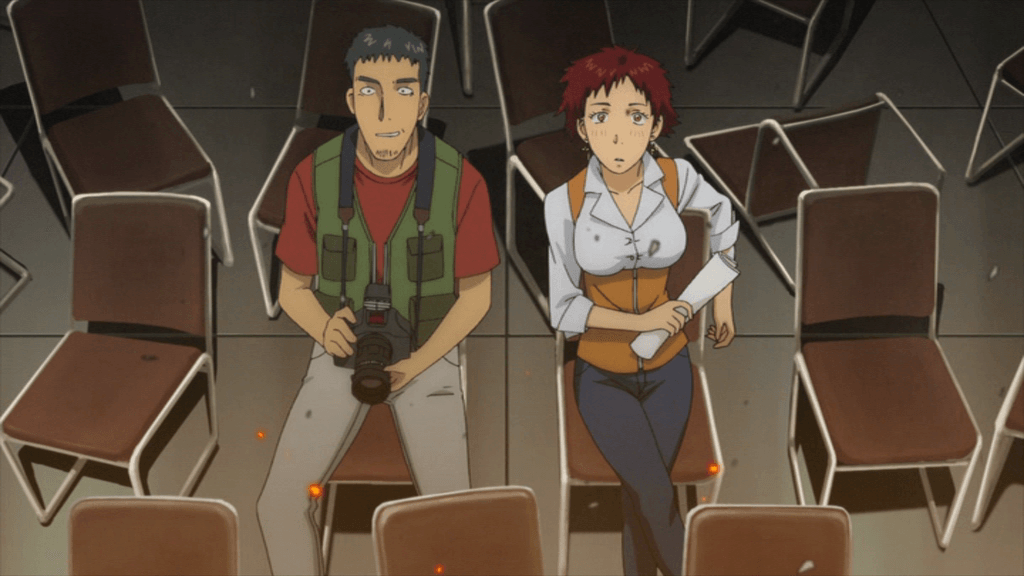 The other special features are your standard fare, textless opening and closing; and Anime Previews. I’m not complaining, the commentaries are well worth watching and the rest are just icing on a yummy frosted cake.

The first half of the series of Rideback is an incredibly fun and emotive work that promises so much with its imaginative world and awesome characters. It is heavily detracted by the second half, which often feels bland and uninspired (as though they may have had a different team working on it or something), but is still not enough of a deal breaker to avoid watching altogether. The series is incredibly bi-polar, being really awesome and fun at the beginning, and then becoming incredibly depressing and dark by the end.

I am quite glad that I had the opportunity to watch this series, and definitely feel it’s worth picking up.