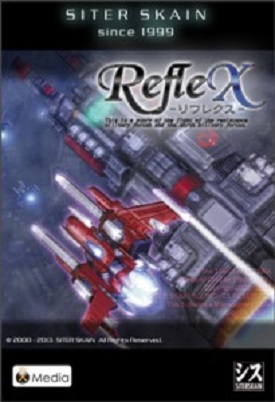 RefleX is the second chapter to one of the most beloved Japanese shooting trilogies, The Tale Of ALLTYNEX. The game seamlessly provides a great shooting experience through the usage of intense gameplay, interesting mechanics, and strongly crafted levels. The title is well-known around the world as one of the best indie shmup titles, and that recognition is well-deserved. With over 8 levels and stages, each with their own unique boss battles, and the unique mechanics of a shield to reflect and block attacks, RefleX is easily one of the best shmup titles I’ve ever had the joy of playing. This version of RefleX is available on Steam as of March 27th, with the other two installations of The Tale Of ALLTYNEX soon arriving to Steam as well. 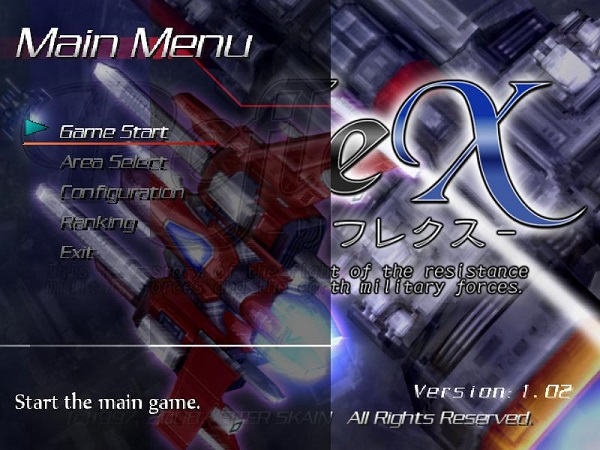 The story revolves around the aftermath of the ALLTYNEX incident, and how humans have resettled on Earth. The world was unified under one militaristic government, and has created a global economy to match it. However, there are those who defy this leadership and would turn against it in an effort to rid humanity of this single-minded government view. The resistance is known as Valkyness. Their conflict grew as the years passed, but suddenly, an alien force arrives on Earth to exact revenge for what the humans did to their race. The aliens are known as Raiwat, and this conflict leads into the third installation in the trilogy, KAMUI. 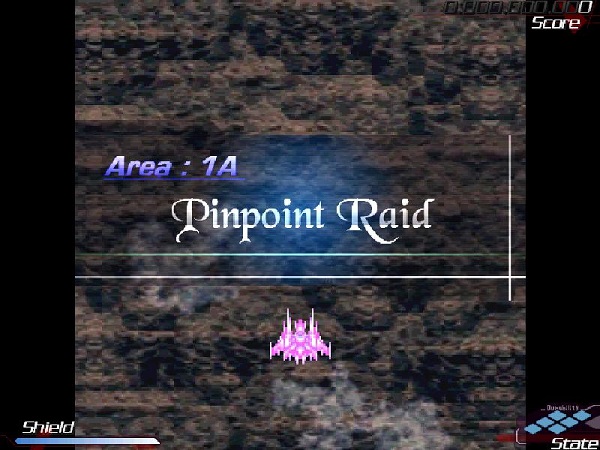 The gameplay for RefleX is very fast-paced. The log-in menu is very simple to navigate, providing you with the options to play the Campaign mode, Game Select Mode (where you can pick which level you start at, as long as you’ve unlocked it), and to see your ranking. When you enter the Campaign mode, you’re allowed to choose your name for which you’ll save your high scores as. Inputting it all is simple enough, but after that is where the fun begins. You’re immediately thrown into the action, as you’re attacked by enemy forces. You break off from your main ship and proceed to attack the enemy head on.

Your controls are simple. The directional keys to control your fighter jet and the default keys for your attack button is set to Z. Your shield ability is set to X, and the Pause function is set to C. Unlike other shmups that allow you to slowly unlock more powerful weapons, RefleX kicks it off with huge weapon capabilities. Instantly, you’re given guns that fire off multiple bullets in a straight line, and less-frequent bullets to the side. It feels really good to blow your enemies up with your rounds, but it’s even better when you can reflect their attacks. 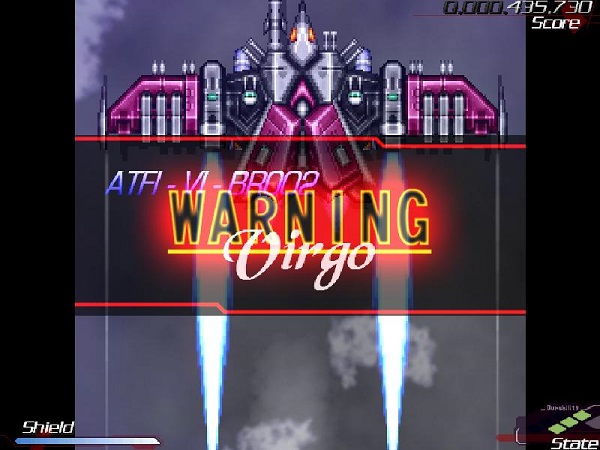 A unique factor of this game that really sets it apart from the other shmups in the market is the shield ability. There’s a little bar at the bottom left of your screen that shows you how much energy you have left to power your shield. Your gun’s power is also based off of that same energy. The shield recharges quickly when you let it sit, and it will recharge a bit more slowly when you’re firing your guns. The shield will blocks all bullet types, with the exception of the blue colored projectiles, which it will reflect back towards the user. The shield factor is what allows a player to get exponentially higher scores than their friends who simply use their guns. The reflection creates a score multiplier that will continue to increase as you reflect more or get consecutive kills after a reflect.

You can keep track of your health in the bottom right side of the screen, where your health is represented by little blue boxes. You have 7 lives before your plane explodes into a flaming ball of metal. After your initial runs, you’ll slowly accumulate extra “Continues”, which will allow you to start over from the same position you died at, allowing you to progress further into the game. However, your high score will only be recorded if you end the game at your first death. Continues are mainly used to unlock the later levels. 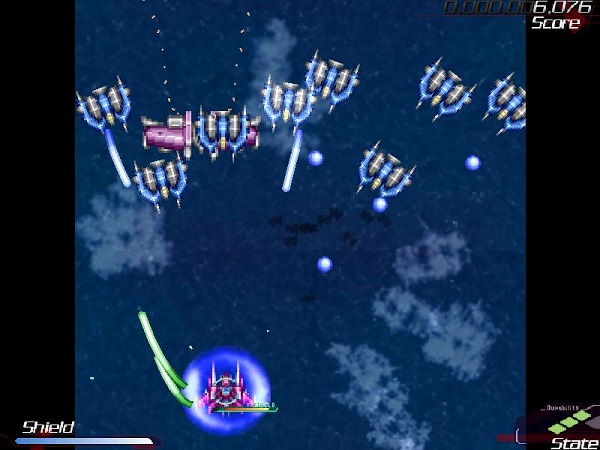 One of the toughest things that I had to get used to was the fast paced action that RefleX provided. I’ve never been a good shoot-em-up player, so giving this title a try was definitely a new experience. The minute I entered the game, I started losing my lives almost instantly. The controls are very sensitive, so a light tap of the Right-direction key would spur my plane far into the side of the screen. Before I even reached the first boss battle, I was dead. Every stage is split between smaller acts. So it’ll go 1A, then 1B, and so on. You’ll know when the boss comes because a huge “WARNING” sign will be plastered across your screen, warning you of your imminent doom.

The game easily ranks as one of the more challenging titles that I’ve tried yet in the shmup genre. The title’s relentless levels really creates a strong sense of gameplay, one that continuously becomes more and more challenging. Everything about RefleX is top-notch, and I really had a blast playing the game over and over again, regardless of if I beat the level or not. 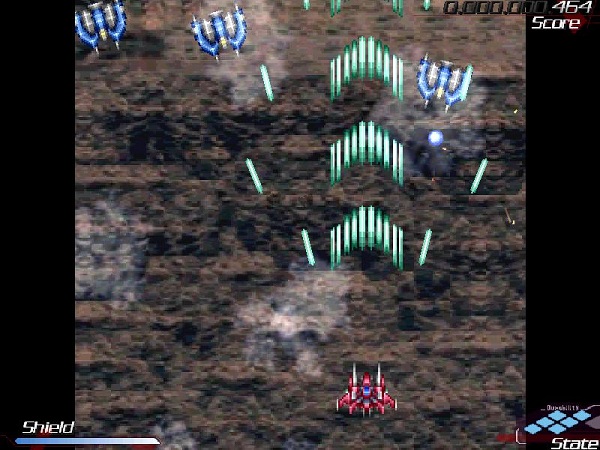 The visuals are very old-school, without looking so classic that it takes away from the actual gameplay. Visually, the game is very appealing. It does tend to get a bit too cluttered every once in a while in the game, but that’s more of the levels design than a problem with the visuals. The audio was actually very fitting for the title. The music matches each of the levels atmosphere and when you’re battling the mobs and bosses in a level, the music really transports you into the game. The soundtracks are very well-picked and they really deserve a lot of the credit in setting the stage for the gameplay. 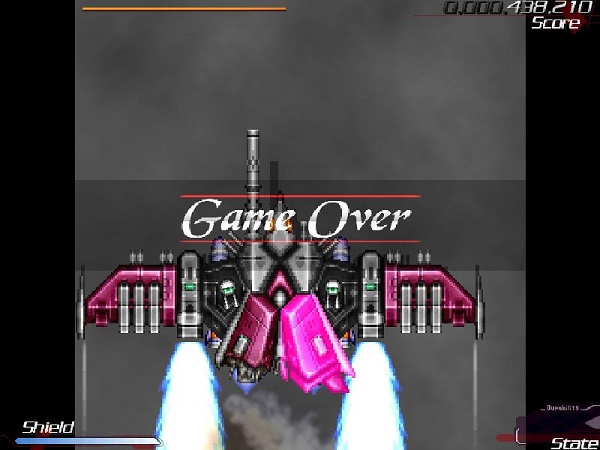 RefleX is an amazing title that does what its intended to do very well. The game is the sort of title that is very easy to learn on the spot and to have fun with, but it’s also very difficult to completely master to a point where you can successfully beat the game with ease. Out of all the shoot-em-ups I’ve played in recent years, I’ve got to tip my hat to RefleX for bringing out the fanboy in me in the genre. 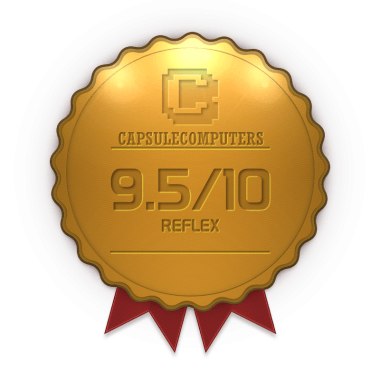