With the successful release of Aralon: Sword and Shadow behind us, Crescent Moon Games are back to bring their quirky art style and charm into a whole new adventure with Pocket RPG. Pocket RPG is a “dual stick” hack and slash adventure, where the player picks a character class and traverses through varied dungeons, collecting loot along the way while leveling up in the process. While the formula has certainly been successful in the past, Pocket RPG applies some new elements to the genre to stand out on it’s own. Just how ambitious is this bite-sized adventure? Here is my review for Pocket RPG.

Story
In Pocket RPG, there really isn’t a story for our three main heroes. The main concept of the game is to simply perform quests with special tasks hidden within, and level-up your character enough to tackle a boss at the end of each area. This formula is rather simple, but in the cartoony universe of Pocket RPG, the plot is not really a necessary element as this is more of a pick-up-and-play title that you can easily jump in and get right to the action.

While the game may lack a plot, it makes up for it heavily with it’s personality. Players are treated to bits of stereotypical dialogue spurted out by NPCs as well as a quirky art style that truly brings this world to life. You see, Pocket RPG actually knows it’s an RPG, and while it brings laughs by breaking the fourth wall, it also keeps in substance that should satisfy any dungeon crawling appetite. 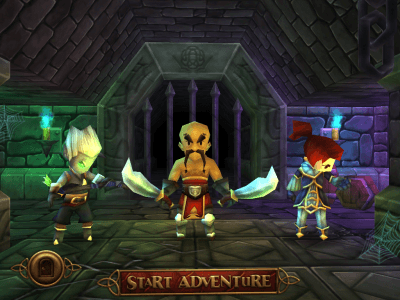 Gameplay
The first thing that you must do in Pocket RPG is select a character. Players can select between a Dark Ranger, who specializes in ranged attacks with a bow, the Blade Master who is best for close combat, and a Battle Mage that can perform various spells that can hit several targets at once. Each character possesses a distinct feel and require a different strategy to be successful. For instance, the Battle Mage can learn several magic attacks that consist of projectiles, so playing at a distance from the foe is crucial to the player’s survival. The Blade Master however is much more hands on and can quickly run in and chop up enemies with his twin weapons, but due to the close range combat he is left somewhat vulnerable to incoming attacks. This balance of gameplay styles works well and adds an extra incentive for multiple playthroughs.

Pocket RPG is a twin-stick hack and slash at heart, where the player must use the left stick to move while using the right stick to control abilities. Holding down the right stick can also allow for a more powerful charged attack to be unleashed that comes in handy for taking down multiple targets at once or dishing out extra damage on a larger foe. It can take a little while to get used to if you are unfamiliar with twin-stick titles, but the sticks provided are very responsive and easy enough to get the hang of in just a short time.

There are seven different quests to partake in within the game, broken up into a few sections for each. On your quests, you simply travel throughout each area while battling enemies that spawn along the way, collecting loot such as currency and items that drop as each foe meet their doom. Chests and barrels are also easy to spot, and with some power-ups and weapons being rarer than others, it is essential to explore and kill everything in sight to gain an upper edge before the final boss at the end of a quest. Merchants can also be found in every stage, selling equipment and new weaponry, which of course put all of that loot to good use. While the locations are varied and unique to their own, this same formula is used up until the end of the game, with the biggest change being the higher level of difficulty found later on. 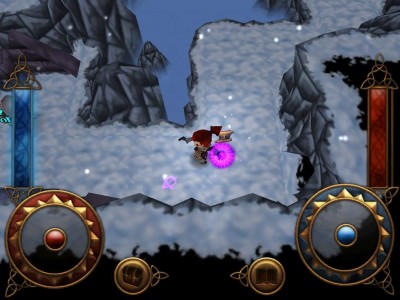 One element that caught me by surprise in Pocket RPG was the inability to have levels and inventory transfer over after a quest. This isn’t quite a bad thing though as starting fresh on each quest allows you to keep with the pace and challenge of the game. Perks, experience, and other bonuses do carry over however, so all of that hard work still manages to be worth something in the end.

Graphics/Audio
One of the finest features of Pocket RPG is the art style, as I mentioned before. The somewhat blocky 3D characters and environments fit perfectly with the feel of the game, and each dungeon provides a new setting to explore, full of vivid color and detailed models. Animations are also well done and no matter how many enemies are on the screen at once, there are never any frame-rate problems or slowdown to be seen, at least from my experience anyway. 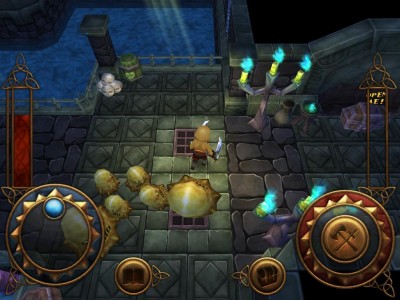 The music in the game is also fitting, with each track perfectly complimenting each area and fading into the background as you hack and slash your way through the many dungeons. While most of the sound effects came off fine, I did notice that certain enemies had no sound at all when actually attacking my hero. That might sound a bit minor, but when you have several enemies on the screen and suddenly have your life drained to zero without even a simple “whack” noise, it can lead to quite an unfulfilled death.

Overall
Pocket RPG is a simple yet fulfilling dungeon crawler that is sure to please both core and casual fans alike. The whole game never takes itself too seriously as witty humor and colorful characters are found throughout, yet still provides all of the looting and XP-gaining goodness that fans of the genre will cling to instantly. Starting nearly fresh on each quest was also an element I rather enjoyed seeing, as I never felt too over-powered and the challenge to the game rose because of that. If you are looking for a substantial RPG-like title for your iPad without all of the commitment, meet your new best friend.

I Give Pocket RPG for the iPad: