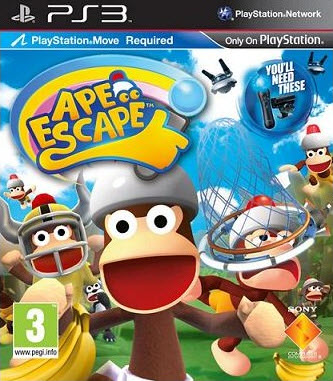 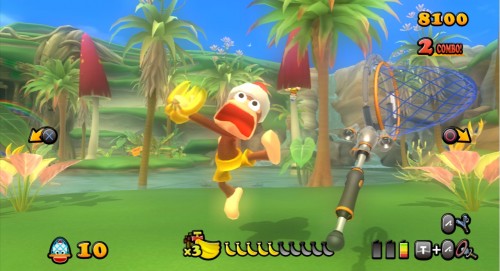 The premise of the game is that UFOs containing monkeys are attacking Earth for some unknown reason.  You are beseeched by some girls to take down these monkeys because the girls are, quote: “Not athletic, at all.”  Apparently, though, you (sitting in your lazy chair and just pretending to stand for the benefit of the Playstation Move) are skilled and athletic enough to catch the monkeys.

The girls also had a very strange grandma who had a very close relationship with a monkey named Specter.  She tried to find this monkey after he had been lost by building a time machine that could locate alien monkeys.  Now it is up to the girls to continue the mission.  Therefore, you are transported to various locations throughout time to capture monkeys, fight metal machines and collect bananas.

Admittedly, this could be really fun.  Consider this:  “Alien monkeys are attacking earth and you must fight them off to save some hot chicks and find the ultimate monkey.”  That actually sounds pretty cool, but in this case, it can make one literally feel brain dead.  Although the story content of the cutscenes is awful, the graphics in the scenes are the best part of the game.  These anime like movies are really well done, and they look like a high quality anime.  The dialogue could use a lot of work, but the visuals and details are top notch. 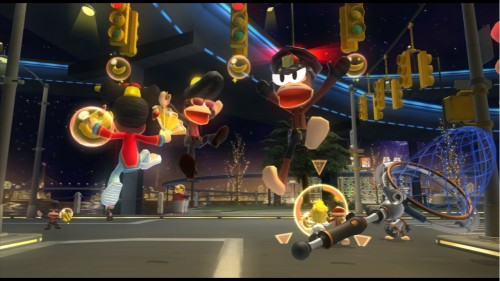 To accomplish your mission, you are given a Playstation Move controller that can transform into a hand fan, a net or a slingshot.  Collectible batteries can, when acitvated, transform the net into a vacuum or the slingshot into a morphing machine that turns a UFO into a banana.  Mastery of these weapons comes after you go through about 10 mindless tutorials.

Now that you know how each weapon’s control system functions, it is time to engage the enemy.  You get to decide whether to explore the rock canyons of yore or the rock canyons of before yore. You are also transported to the surprisingly tepid future and other time travel locales. However, you can’t explore these dull rocks, buildings and places.  The entire game is on the rails.  You can look around, but for the most part, your just gonna stand there while swinging the the Move controller back and forth to catch the stupid apes.  Occasionally, a more voracious metal walker or UFO will jump into the fray, but these are so easily dispatched with the slingshot, it is not even challenging.

If the monkeys happen to get close enough to your person, they will steal one of your bananas (which your collecting for some god forsaken reason).  If they steal enough of your bananas, its game over.  It is pretty tough to fail though, especially because you can use your slingshot, fan or net to collect a myriad of bananas scattered throughout each environment.  If you happen to grab a battery while your stealing the yellow fruits, then you can use the vacuum to suck up the monkeys.

For gameplay variety, you can play a variety of unlocked mini games.  One is coop, where you can drive around while your partner operates the turret.  Unfortuantely, that is the only multiplayer part of the game.  There is no option for online play or split screen.

There are also options to record your voice and view the biographies of each character and monkey present in the game. This is also super boring and has literally no point, especially considering how you can record your voice on just about anything nowadays.  Perhaps when the first iteration of Ape Escape appeared, this would have been a novelty, but now, it just seems incredibly simplistic. 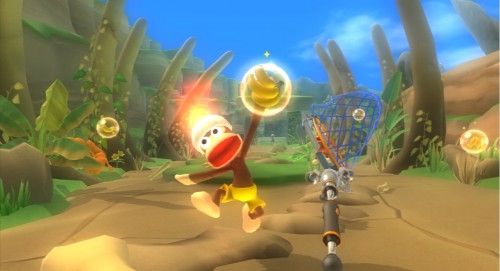 The graphics in the game also fall well short of any present day standards.  The environments made me want to go to sleep so that I could dream of being somewhere else with better visuals.  The textures are awful and there are no details, not that you could see them anyway if there were any, considering the whole “Hey, your on a rail and can only go where we say so” mechanic.

The audio in the game verges on annoying.  The sudden sound effects are mostly high pitched and they occasionally made me jump out of fear.  If they were not making me jump, they were making me search for the remote so I couldl mute the stupid monkeys, voice overs and sound effects.

At least there are some good controls present though.  The Playstation Move controller responded well, although there was some slight accuracy problems.  For the most part though, it was easy to manipulate and it showed off the newish tech well enough. 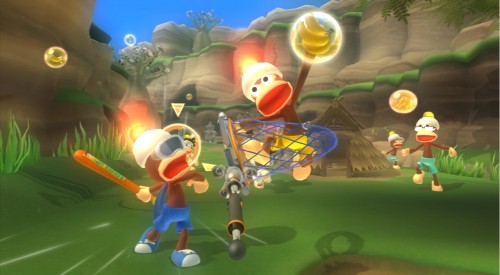 In conclusion, this game may hit the spot for very casual gamers or for 3 year-olds (although I have seen much better games designed for 2 year-olds, and that I had fun with too).  Even the difficulty “spikes”  (if you can call them that) are easy to overcome.

Ultimately, this game was rushed and has hardly any redeeming features other than the anime movies and short length.  They are some easy trophies too, if your into that type of thing.  Mostly though, this game is just a brief on-rails shooter that has been out done by countless other games.  If there was some better game play and less mind numbing in general, this game would have had a shot.  After all, that story, although insane, might be fun.  And the controls are great.  Everything else is awful though.  I wish I did not have to be so harsh, as every game always has something going for it and these games have a lot of work go into them. In the final analysis though, go to the zoo to see monkeys.  You will have more fun.