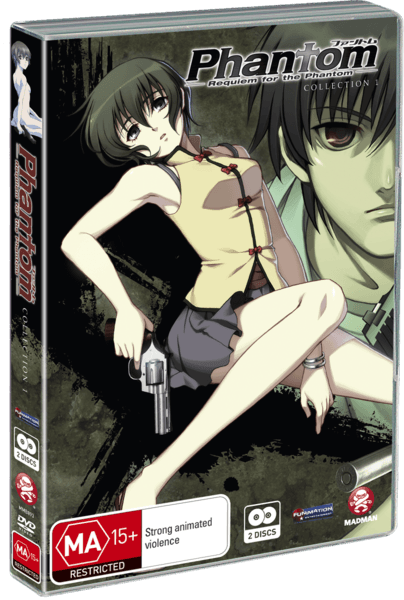 Do killers get to have a conscience? What choices exist to those who only see the world in the distorted eyes of an indentured assassin? Something that can be said for Phantom: Requiem is how it attempts to establish and resolve moral quandaries in a world that supposedly exists without morals. Throw together a story that involves pre-meditated murder, lost souls, an unlikely romance and a full scale gang war, and this anime collection is the result. Not exactly your child friendly happy-go-lucky Pokémon anime affair. If nothing else, the rating on the side of the box art should be enough of an indication of the content of this anime. Watch it expecting a bloodbath.

“A young man with no memories fights to salvage his humanity when he’s forced into a life of murder by a dangerous crime syndicate called Inferno. The organisation gives him a new name, Zwei, and moulds him into a perfect killing machine, a meticulous instrument of death created to obey his masters’ every deadly command.

Zwei’s not the only puppet controlled by Inferno; Ein is a girl as beautiful as she is brutal, and lethal as she is lost. While mafia violence escalates around them, the two assassins grow closer, and Zwei begins the struggle to reclaim his past and save Ein from a blood-soaked future.” -DVD Blurb

While it may not be an anime title that many within western circles would be familiar with, it was apparently popular enough in Japan to spawn several spin-off games for the current generation of Consoles. Additionally, the original visual novel featured a choose-you-own adventure style story flow, which allowed readers to experience multiple endings. While watchers of the anime will be stuck with the pre-set story flow, there are many scenes and occurrences that will no doubt leave some of the episode endings open to the interpretation of the viewers. A Dark edgy thriller mixed with a slice of drama and romance.

The story begins with very little detail regarding the universe and characters. All we as viewers are told is that an Organization known as ‘Inferno’ is pulling some serious strings. Cut to a young man driving a convertible through what looks like the coast of Brazil. The car approaches a check-point with two heavily armed guards waiting to check him out. They never get around to it though, courtesy of the few extra holes that the young driver just put through them using his concealed weapon. Viewers are then treated to a sudden onslaught of gunfire as we realise that this young man isn’t somewhere where he’s supposed to be. That is the introduction of our protagonist: Zwei. 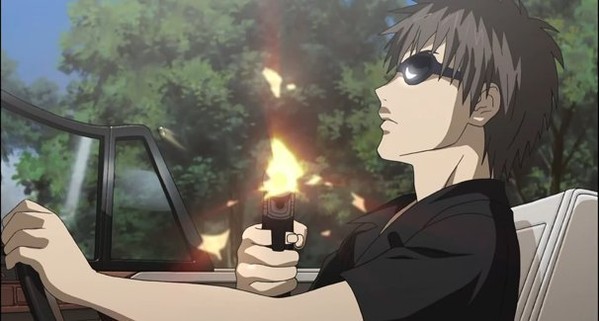 The show primarily centres around both Zwei, and an young girl codenamed Ein. Both are established as elite class assassins, with the senior killer Ein taking on the mantle of “Phantom”, the best assassin and marksman of the Inferno criminal organization. Her name is supposed to strike fear into the hearts of Inferno’s enemies, whether they be the law, or any rivals to their power. Sufficed to say, they are a very rich group with few quarries about killing what gets in their way, and plenty of bullets to achieve that. A volatile combination. Wishing to usher in a new world order, which is to be controlled by their organization, Inferno goes about the task of destroying any rival mafia gangs which may pose a threat to their superiority. To do so, they need to kill a lot of people. One of the senior members of Inferno refers the matter to one of the group’s top scientists, a cold-blooded professor known only by the nickname “Scythe-Master”. He commissions the creation and manipulation of the two super-assassins Ein and Zwei based on their animal like instincts, as well as their brutal natural combat skills.

Now, as both slaves and assassins, Zwei and Ein are forced to undertake deadly missions if they are to survive within the Inferno organization. Their code of life is to kill or be killed. Throughout the series, we see both assassins learn and perfect killing techniques, but we also recognise that they feel they are losing their humanity in the process. They undertake many fatal missions at the whim of both Inferno and the Scythe Master himself, who viewers will no doubt perceive as something of a wild-card in this story. Additionally, an unpredictable and somewhat unexplainable romance begins to develop between the two assassins and is often hinted to in many episodes.

By and large, the themes and story of the anime are quite dark. The plot has been pretty well thought-out, and episodes and events spaced at appropriate intervals. However, there lies something of a predictable pattern in each episode. In an immoral world rules by crime lords and killers, it’s pretty obvious that in each episode, someone is going to get back-stabbed or killed in some way, shape or form. Add on the numerous hidden agendas and the mysterious nature of the story itself, it is sometimes difficult to place what is happening and whether we, as viewers, are supposed to side with, sympathise or detest certain characters. The pace is well thought out, but sometimes, audiences do value a degree of transparency. We love knowing who to hate, but in this show, it isn’t always clear. 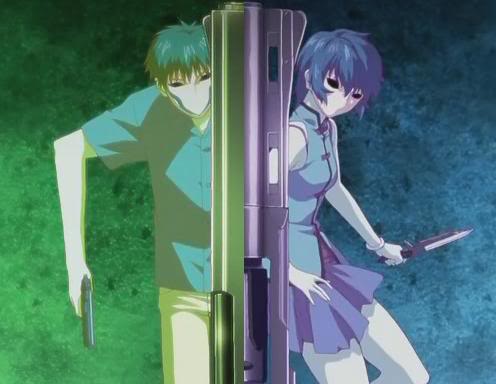 The art style of the anime is actually quite well executed. Dark colours dominate a majority of the darker scenes in the anime, however not so much to the point where the whole series is overwhelmed by it. Colouration of other scenes is well varied. This is accentuated in viewing the recon scenes being executed by Zwei and Ein, who both pretend to be a couple on a date of some kind to divert attention from themselves. In these scenes, viewers are treated to a few wacky scenes which seem totally out of character for the dumbfounded Zwei and cold hearted Ein. I personally did not picture Ein as a girl who would be sensitive about Zwei’s approval of her swim wear. In these scenes, natural elements like water, wind and light really change the feel of the scene. Despite the viewers being aware of the charade, they genuinely believe that the two are treating the experience like a real date. In contrast, it does seem to me that much of this anime tends to take place at night. Often during the missions themselves, darkness dominates everything. Even amongst the bright casinos, we know that, like the date, the pretty and seemingly normal display, there lies a sinister intent or deed.

A lot of emotion and despair is visually translated to the audience by the eyes of the characters. When Zwei and Ein kill, we see a faint greenish glow around their eyes, showing that the natural instinct of kill or be killed has taken them over. In contrast, we never see some characters eyes clearly, and thus their intent is difficult to place.

As the anime attempts to portray itself as a sort of realistic, dark interpretation of a sinister world, the need for special effects or over the top clothing or character design is played down. The anime itself seems accurately contextual to the date in which it is published. No futuristic or alternate universe clichés to bog it down. The rough raw feel and simple elegant character designs really benefit the overall tone of the anime.

The opening song reminds me a lot of Ghost in the Shell, maybe not the beat as much as the melodic voice. Either way it’s a beautiful and interesting way to begin an anime on. The music within the anime itself can only be described as magical and mysterious at times and then dark and full of tension at other times. The only thing I can say is the music seems to be mostly instrumentals.  An interesting fact is that the closing song made me laugh slightly because I instantly recognized it. The closing song is the famous Rozen Maiden’s opening song! Overall the music really fits with the anime and brings out the darkness from the story line. 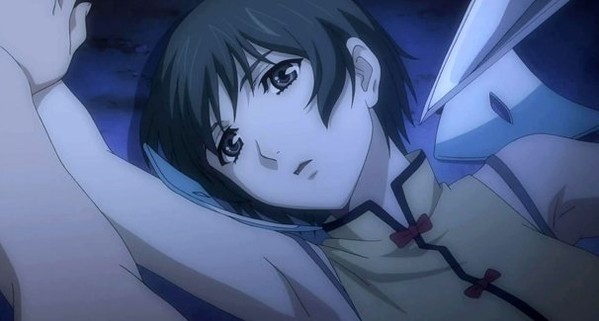 Zwei is the main character of this anime. A Japanese tourist who has had all his memories erased has been turned into an assassin by a criminal organization called Inferno.  Zwei means two in germen and this can be seen as very fitting as he is the number two assassin for Inferno. Unsure of whom he is or what he is doing, all Zwei knows and has been taught is that he has to kill to survive.  All together he is an interesting character but through watching the first 6 episodes, I can’t help but feel like he should have given a bit more of a fight then just accepting that this was his life now.

Ein is the first assassin that Inferno has, and therefore her name means one in germen (though it really should be eins.) She is a cold blooded killer that seems to feel no emotions but at the same time you can’t help but feel like she is slowly breaking down as she watches her prodigy, Zwei.  This character seems to have no real flaws with her characterization as I understand why Ein has become cold and seems to have shut down from the world. The only thing I question about her is why she is being so nice to Zwei and what it is about him that is making her break down, maybe a real social relationship? I don’t know but I’m curious to find out.

Scythe Master or just Master as Ein calls him is the puppeteer pulling the strings of the assassins Ein and Zwei.  Instantly we can tell he is the villain and the way he treats Ein in his creepy sleazy way just makes him seem even worse.  We don’t know what he is exactly planning but we know it isn’t going to be good for his two puppets.

Claudia is a confusing one. She is a lady with lots of power and wealth, and just seems to have fun messing with Zwei’s head.  Sexy and full of confidence, she is a good asset to Inferno but what I’m really wondering is what she is getting from all of this.

Phantom: Requiem is a unique and dark toned anime. It has both an interesting concept of mind controlled assassins as well some great characters and an interesting story line of a crime organisation trying to unify the underworld. While it’s not perfect, and the story and characters tend to jump from one place to another very quickly, the moral argument of using people as tools is quite clear, as is the social commentary regarding choice.  I believe those who love concepts, characterization as well as drama and action would love this anime.