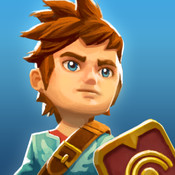 Oceanhorn: Monster of Uncharted Seas, published by FDG Entertainment and developed by Cornfox & Bros, is an action-adventure game and – if I can so plainly put it – a Legend Of Zelda/Wind Waker clone for Apple iOS. Oceanhorn certainly replicates nearly everything we’ve come to love about Nintendo’s Zelda franchise to a tee whilst adding their own little tweaks and improvements that make this kind of genre even more enjoyable. As we’ll most certainly never see an official Nintendo Zelda game make its way to the iOS platform unless a miracle happens, Oceanhorn is the next best option available… but is it worth the hefty $9.49 price tag? Read on to find out. 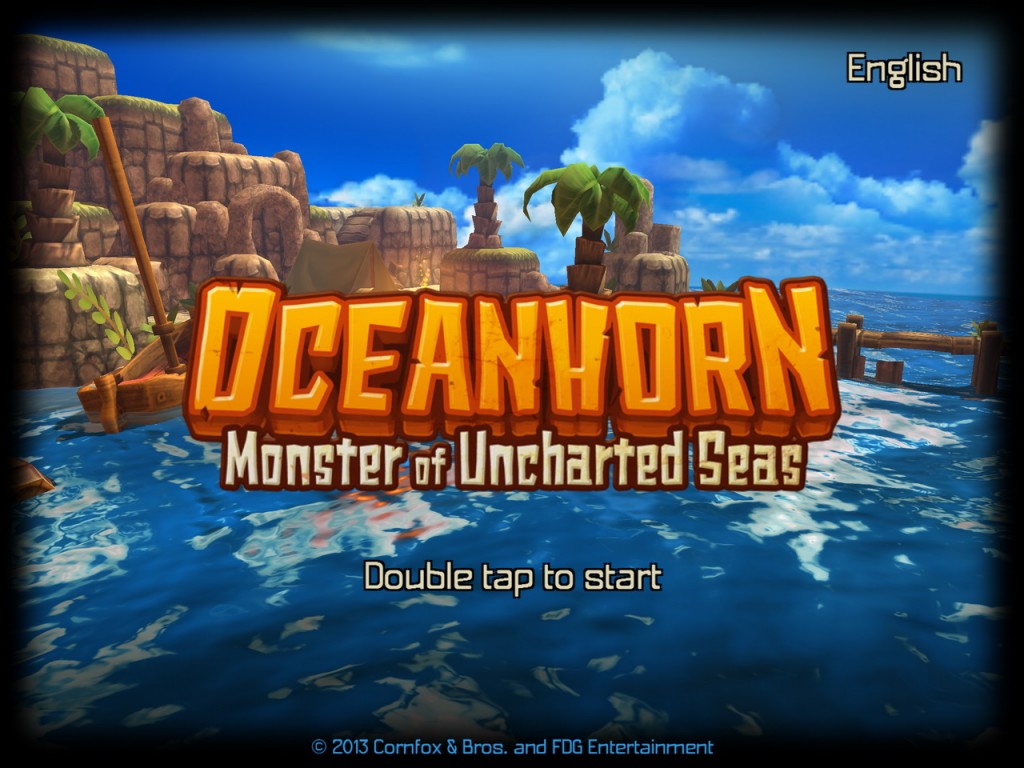 Oceanhorn has no princesses to save – shock horror right? However, you do start off in a very similar fashion as ‘A Link to the Past’ with you lying in bed while your dad murmurs to himself about finding Oceanhorn, then proceeding on an adventure to put an end to the evil monster. Once you set forth your goal is to find the sacred emblem pieces of Sol, Earth and Ocean. You will have help from both your father in the form of an audio diary/journal that triggers each time you visit new, unexplored areas and islands, and also trinkets that once belonged to your mother, as well as other people that will help guide you on your journey in unravelling the mysteries behind this mysterious kingdom of Arcadia and the evil that lurks on each island, cave and dungeon that you explore. Ultimately, you must find your father (is he still alive?) and also put an end to the evil Oceanhorn (wherever he may be), thereby cleansing the world of dark energy that has corrupted and cursed the kingdom and so many of its islands. 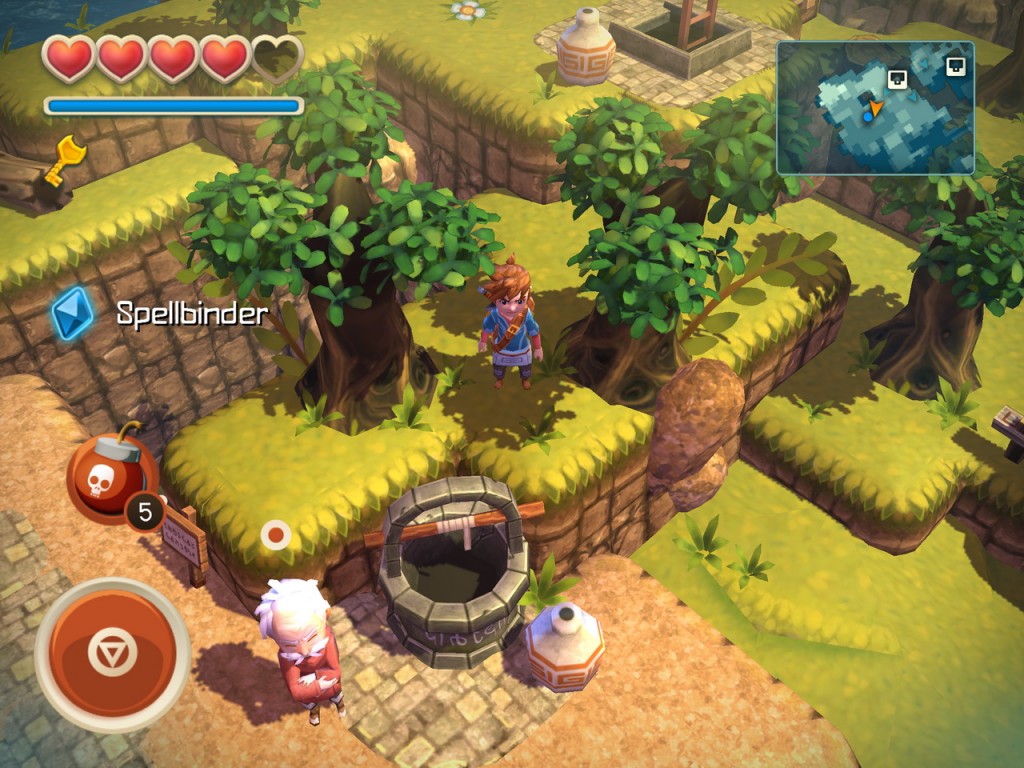 The gameplay in Oceanhorn plays and feels exactly Zelda. Yes, this is truly a Zelda clone through and through, all the way down to the enemies, character designs and even the cave and dungeon layouts are very similar with the only major difference being in the use of the map system, which reveals more as you explore and venture forth in each area. The ocean sailing is also very similar to ‘Wind Waker’, as when you plot a course and set sail to that particular island, you then sail automatically to that location. If you make a mistake you can always stop and set a course to another spot on the map, along the way shooting and taking down enemies, floating crates and mines that randomly appear that might give you gold and experience. 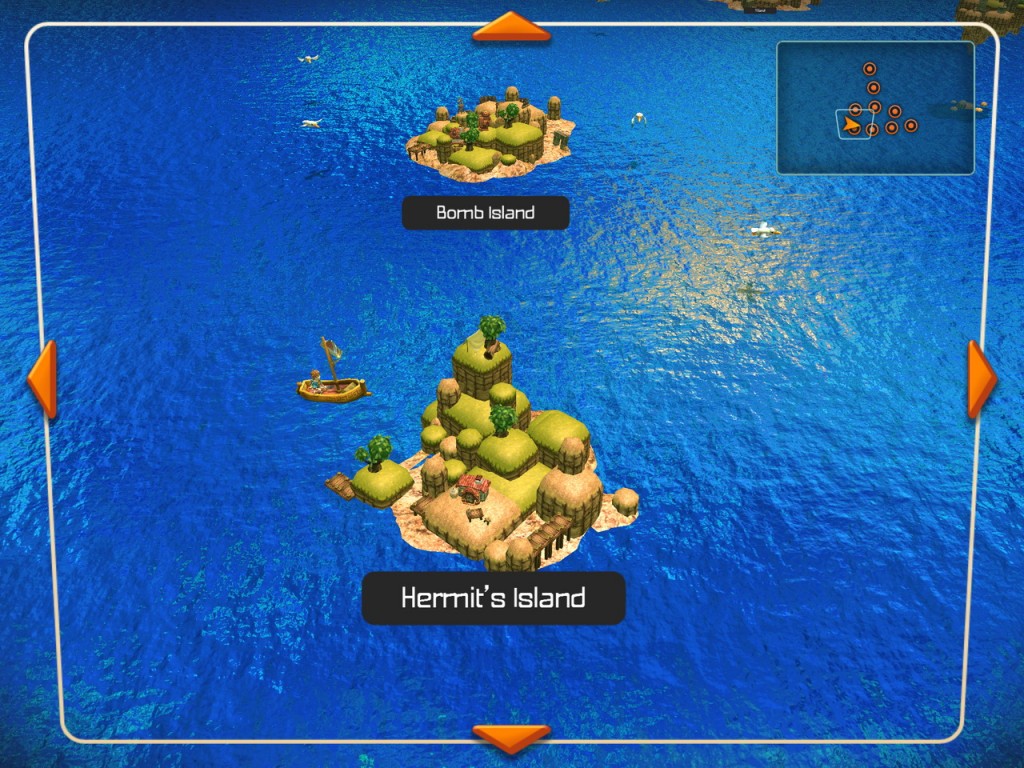 An added feature is the use of magic in the game; you can cast a number of different spells that you learn and obtain while exploring the islands. For example, a magical ability you can cast is the ‘earth spell’ that allows you to cast down a boulder onto enemies, causing damage, or to use on switches to unlock doors and solve puzzles. As you explore islands you can loot chests, fight enemies, solve puzzles, push statues, pick up pots, rocks, barrels, stone blocks, logs and lanterns and hurl them towards enemies or use them to solve puzzles such as using a fire lantern to light four pillars to open a secret door.

You also find power ups in the game similar to Zelda, such as a bow, bombs and ‘jumping boots’ needed to access hard to reach areas. One fresh feature in the game that sets it apart from the Zelda franchise is the experience mechanic. Killing enemies earns you experience in the form of blue diamonds; collecting enough of them will level you up and raise your Adventurer level, giving you new titles such as Pathfinder, Spellbinder and Knight Of Arcadia just to name a few. These gift awesome bonuses, such as being able to hold and collect more bombs or being able to swim longer in the ocean before you drown. 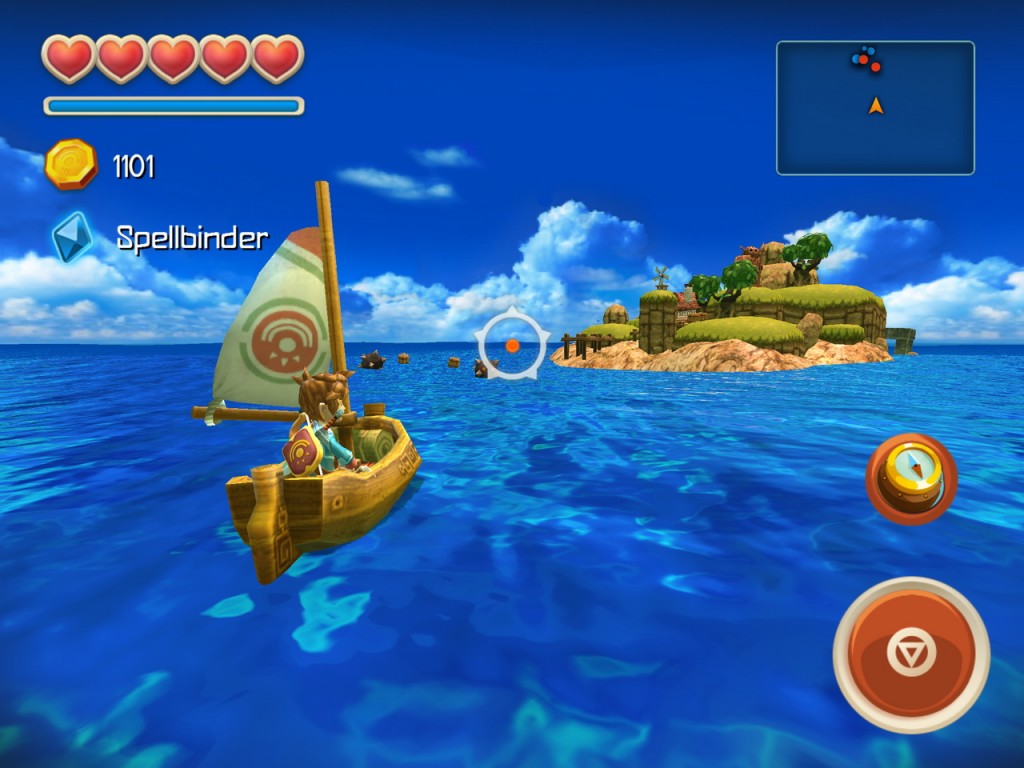 Another important factor when it comes to iOS games is the control system. Cornfox & Bros have done a marvellous job here at providing you with a number of different options for both left and right handed players, offering both an invisible analog stick and a virtual analog stick with easy to access attack and menu buttons that don’t clutter the screen, but are simple to use and get the job done. The easy to follow menu system that can be accessed by tapping the map icon in the top right of the screen provides you with your current level and rank status, along with a percentage completion indicator letting you know how much you still need to get before completing the island you’re currently on. You also have a list of all your weapons and spells you’ve learned and obtained as well as emblem pieces, Bloodstones collected around the kingdom and heart containers found (yes, heart containers!) which, once you find four, grant an extra heart power making you stronger. Another great feature in the menu system is the Flashback section that lists in a log text format all the latest conversations and special notes you’ve had with NPC’s so you can go back to this and re-read everything just in case you’re stuck or need help. 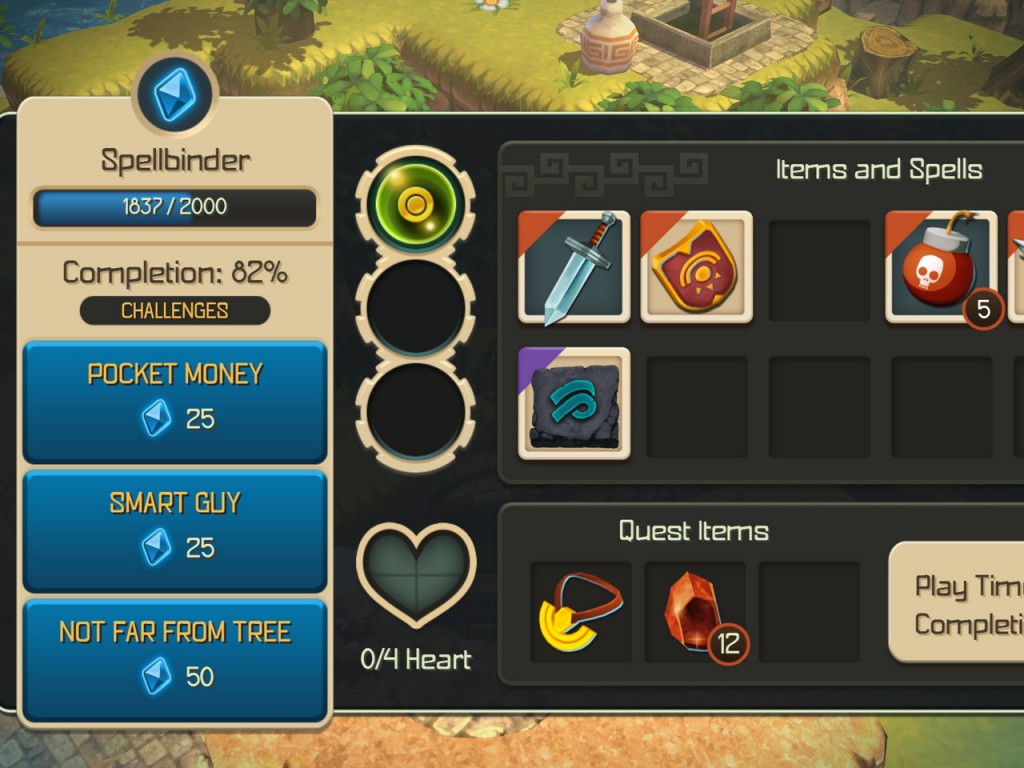 Oceanhorn’s composers Nobuo Uematsu and Kenji Ito have created what might be one of the best musical scores I’ve heard for an iOS game. They have captured the tranquil and also heart pounding moments within the game perfectly. The opening music from the start menu of the game is one of the best I’ve ever heard and feels like something out of Final Fantasy, which I believe Uematsu-San did infact work on (Final Fantasy X). 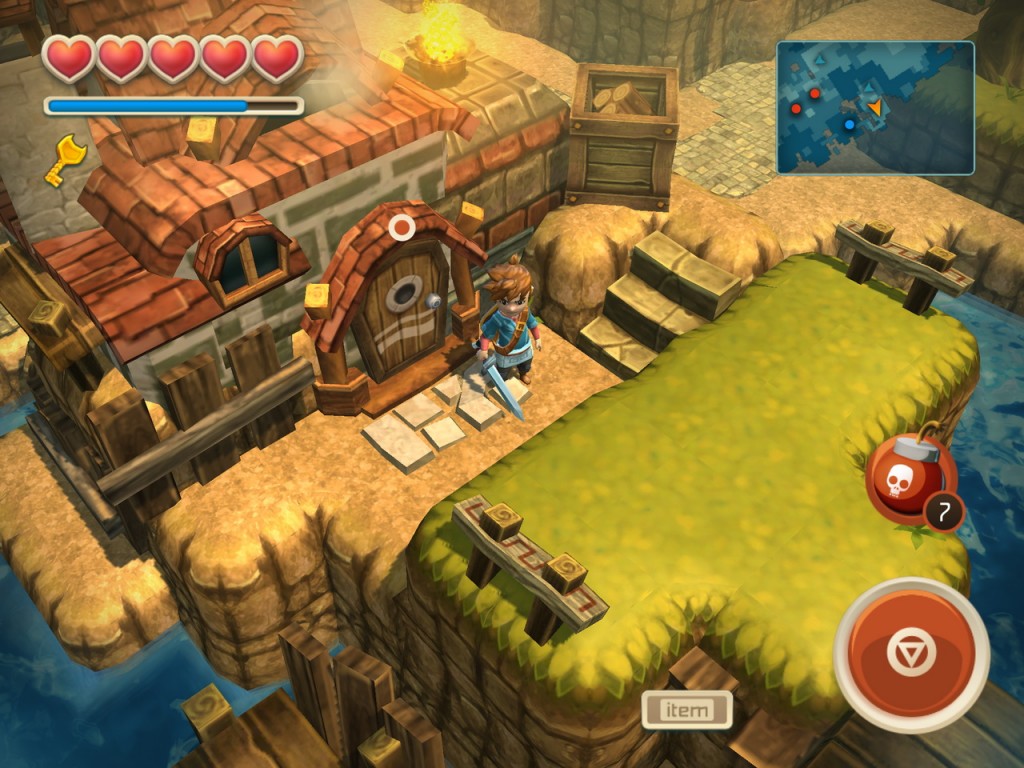 Graphically Oceanhorn ran flawlessly on my iPad Air – it’s recommended for that and also the iPhone 5, but the game is supported on all iOS devices. You might experience occasional lag on the older devices, but nothing that will cause any problems or hinder your game play experience. The Kingdom of Arcadia is filled with vibrant and lush 3D environments from sandy desert islands, to leafy jungles and dark, gloomy dungeons. Many of the environments’ fixtures, such as fences and trees, move and sway if you brush up against them giving you that extra added feeling that the world is as real as it possibly can be. Cornfox & Bros have tried to be as detailed as possible and leave no stone unturned when it comes to making the Kingdom of Arcacia extremely tangible and lively. 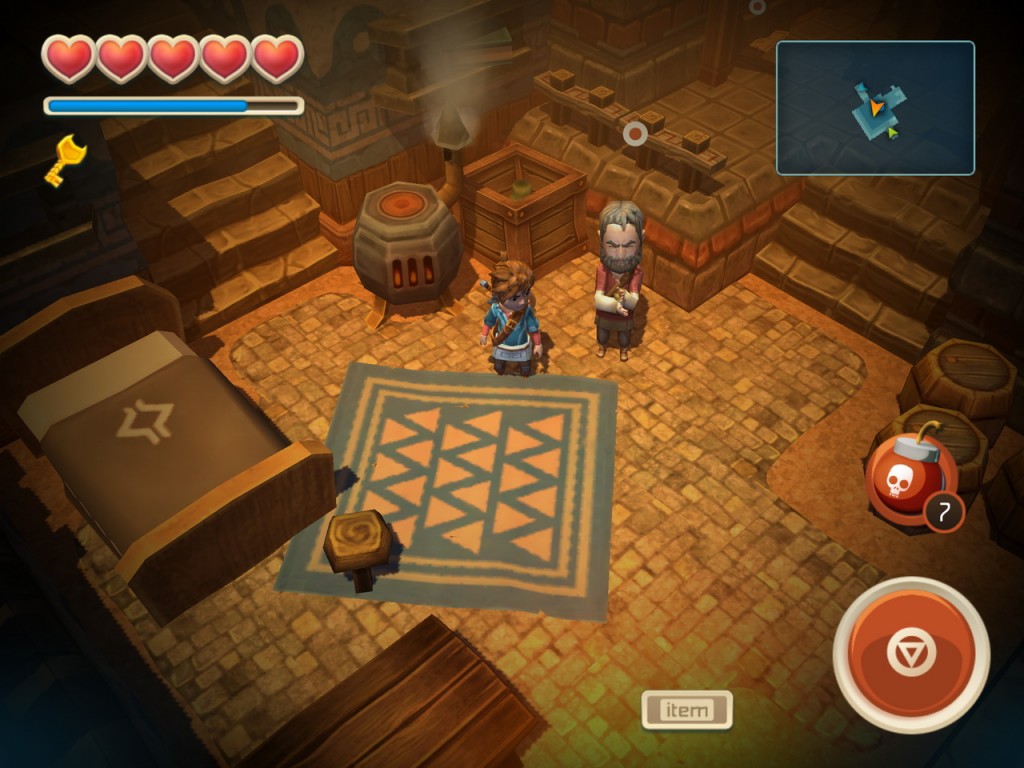 Oceanhorn might be a completely similar game to Zelda, but in the end it has its own unique and redeeming qualities that should be taken very seriously for a title on the iOS platform. Most importantly, once you purchase the game, it delivers and provides a superb 15-20 hour game play experience with no annoying in-app purchases what-so-ever… something that is very rare to come by these days! If you love your Action-Adventure RPG’s, with a slice of Zelda gameplay on the side, then Oceanhorn is the game for you! Grab it now before it sets sail into the sunset without you. 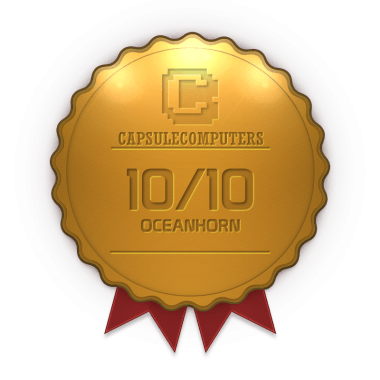