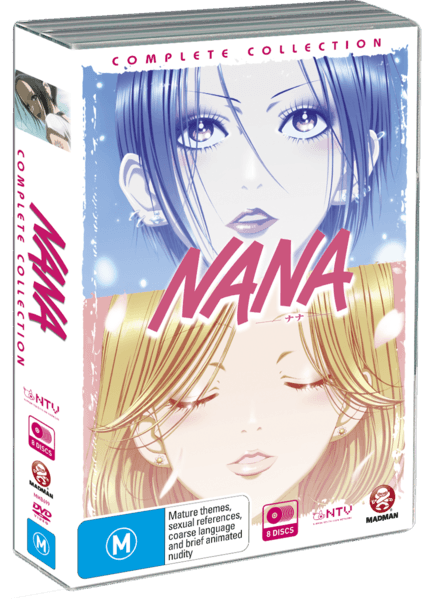 This series is a drama series aimed primarily at a female audience, which puts this in the Shoujo category of Anime. This category is something that many male anime fans tend to avoid, and after watching this series, it is apparent why this is the case. No male should be willingly subjecting themselves to large doses of this stuff as it may seem quite nonsensical, illogical and even degrading. Maybe things are over-exaggerated to appeal more to the target demographic (teenage girls), but it is still geared for the female id.

The story of NANA follows two young women named Nana, each with almost polar-opposite personalities. The first Nana we meet is the Nana that seems like a normal girl, she’s cute, charming, boy-crazy and is obsessed with her friends. The second Nana is almost completely different, she’s in a punk rock band, aloof, not at all girly but at the same time, is completely badass. The two of the Nana’s meet one fateful day on a train heading into Tokyo, where they both plan on moving for reasons of their own (hint, both are for guys). 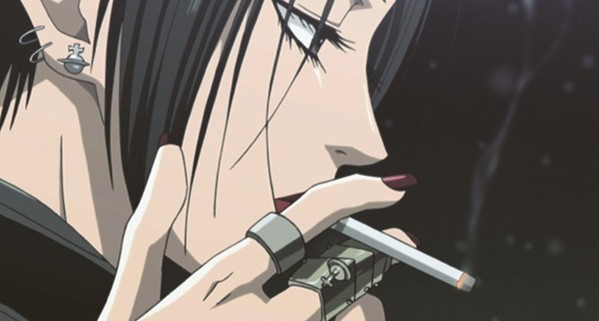 Unlike most other Anime series that I have seen, NANA’s storyline arcs follow sets of relationships that Plain-ordinary Nana, nicknamed Hachiko (which I’ll be using from now on to differentiate her from the cooler Nana), has with the people around her. I don’t want to spoil the story too much, but it is literally just as I described, by episode 30, Hachiko has switched guys 3-4 times and even falls for a big-time player who adds a crap-tonne of emotional drama to the series.

Actually lets talk about that player for a bit shall we. He’s the a guitarist in one of the main bands in the series, Trapnest, and is a well known philanderer. Now, everyone tells Hachiko this, yet she still falls for this guy. A known player, someone who uses women for sex, and she was still deluded into thinking this was a good thing. There are even multiple scenes in the arc where she constantly rationalises her involvement with the guy. Why couldn’t she just be all like “Hey, this guy wants me for the sex, I want him for the sex, so we’re sleeping together”. But no, this doesn’t happen, instead she focuses on how this will affect her relationship with those around her and her own image within her group of friends. Look, if you don’t want to look so promiscuous, then keep your legs closed. Simple.

Opposing Hachiko and her man-eating ways, is Punk-rock Nana. She is an incredibly loyal woman, a bit of a tomboy at times and throughout the series she is really only with one guy. Her boyfriend from back home, Ren, the lead bassist for Trapnest. Sure she seems a little hot-headed at times, but I think these traits are played up for comedic value as her friends and Band, Blast, seem to remain friends with her. Though, this becomes more apparent throughout the series, Nana is a pretty possessive woman in that she literally has a chain around her boyfriends neck as a symbol of ownership. She even refers to Hachiko as her pet numerous times. 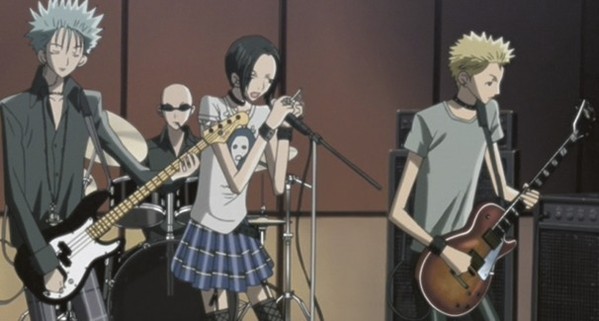 Many times throughout this series, I often asked myself whether this show was serious or not. I mean, the way the characters behave, think and feel are all almost completely alien to me. Nothing is rational, organised or logical, nearly everything is designed to hit you emotionally. Now, I’ll admit this freely, I actually thought that I was watching a bad parody of female stereotypes and was laughing so hard for the first 15 episodes or so. Past that point, it became rather apparent that it was taking itself seriously, this is really how women view the world… I mean I really hope it isn’t, but it really seems like it was designed to fit their perspective.

What I really hated about this is that the men are made to fit the way women see them. The author, or writer, or whoever, seems to have a harder time entering the male mind-set and as a result all the men are presented mostly by their actions or what the author has experienced of men. When it comes to the male homelife, many of the guys seem to have very bare rooms, and do not behave typically the way myself or probably most other men behave. It seems that they only exist to placate their female love interest.

As a series from the early 2000s (2003, if I recall correctly) the visuals may look a little dated compared to the Anime of today. However, this does not mean that they are inferior to the Anime series of today. 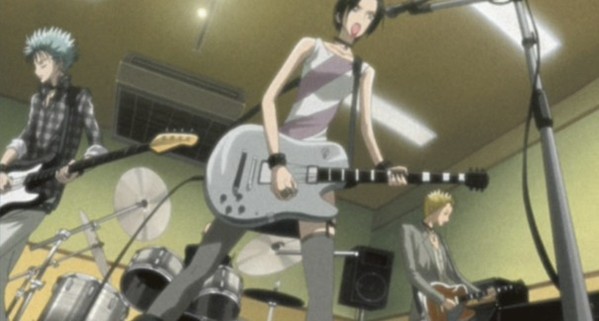 I found that the backgrounds and a lot of the objects found within the series had  a lot of detail put into them. I think this is because the series revolves around so few locations, it’s not like a fantasy series where characters are visiting a new town in each episode. However, opposing this, is the characters.

While each character is quite detailed, they are also very unrealistic looking. They are rather disproportionate, almost to the point of looking like they’re all just skin and bones with extremely odd looking limbs. I mean, out of the main cast, the biggest character only looks that way because he’s in a suit.

Actually, the series’ visual style really reminded me of a Shounen series by the name of One Piece, but only a little. The characters in this show are much more pretty, almost unnaturally so. It’s almost as though they’re a fashion accessory, used to gain some kind of social advantage over other women.

To quote myself in conversation about this series – “… NANA has an amazing soundtrack”. I will standby that statement until someone can prove me wrong using evidence and sound logic. 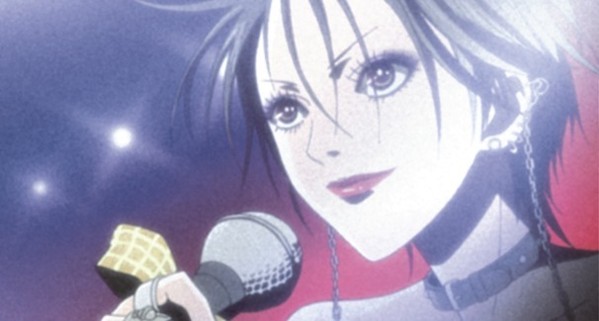 Even though the series is pretty light on tunes from either of the main bands, the ones that we hear are quite significant and sound quite amazing. The only thing is, you really, and I mean really, want to hear more songs from both of the bands. If the producers put in more concerts, they could have made a killing selling copies of both of the bands albums out here in the real world. I would buy the crap out of them.

However, the amazing soundtrack kind of ends with the bands. Most of the background tracks seem to be constructed from a generic score, I think that a Punk Rock style score would have fit the show much better than the backing tracks that we were given.

The series includes many extras, but my favorites are the animated video for the song Lucy and the clean opening and closing segments. The complete list is this –

NANA is a fairly average series that probably wouldn’t interest too many guys. Fortunately, there is a massive fanbase for this kind of material and for them, this show would be ideal. The kinds of people that would love this series are people that have read the Manga, love Shoujo stories and are massively into gossiping about drama. I would also like to say that any guy looking to try and catch a glimpse of what it’s like to exist in the mindset of a woman to check this series out. In small doses.