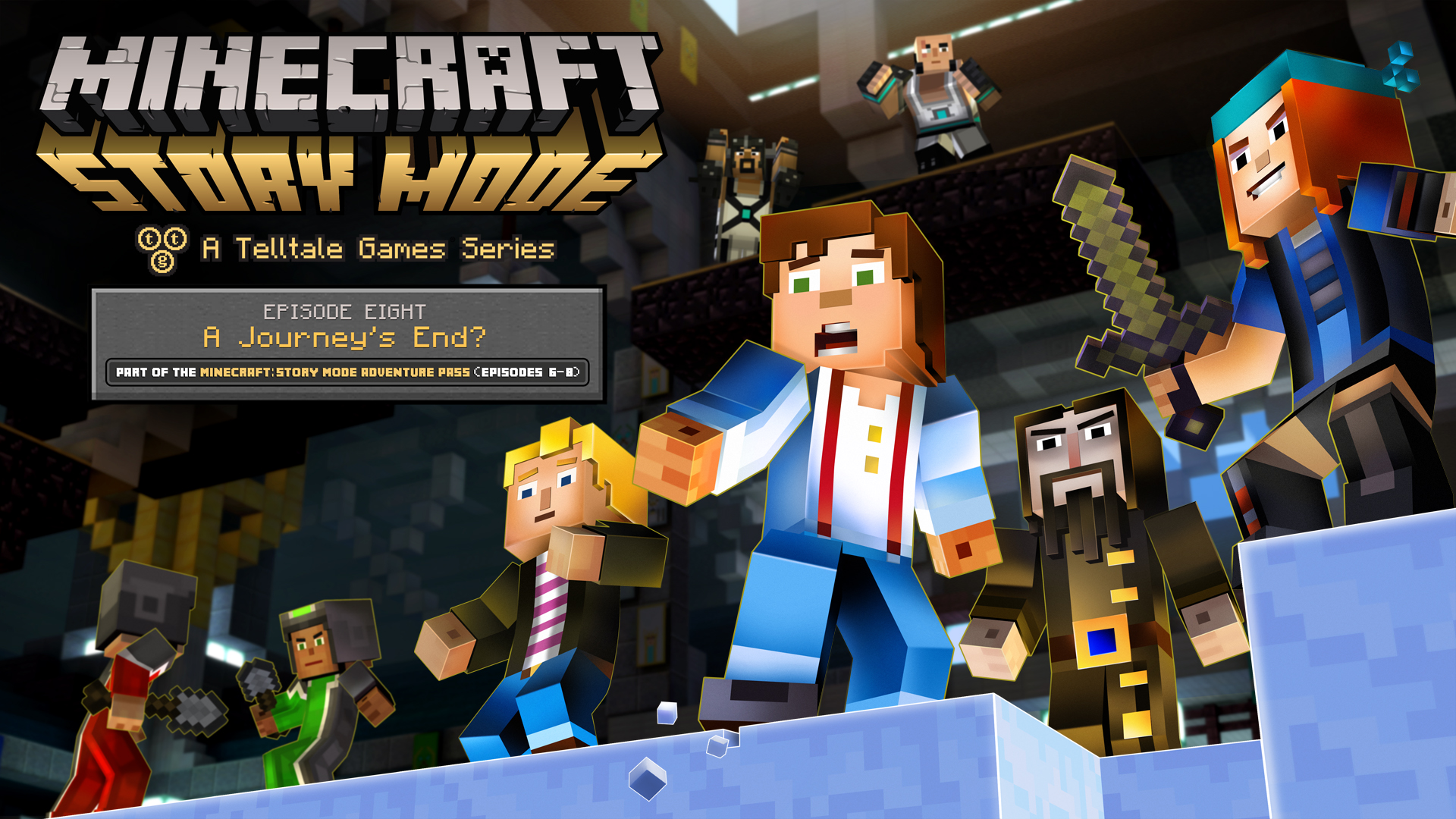 Many wondered just how Minecraft: Story Mode would turn out back when Telltale Games first announced the series and while it has had its ups and downs throughout the story, few would have guessed that it would end up being the second longest series from the company. With the core story wrapping up in five episodes and then extended with an extra three how does the eighth episode, A Journey’s End?, manage to wrap up the story for at least this season?

A Journey’s End? picks up immediately after the events from the last episode where Jesse and the group learned that they were approaching the end of their journey as the Old Builder Harper could guide them to something known as the Atlas, a powerful item capable of guiding them through the portal hallway back to their homes. With the Atlas in the hands of the rest of the Old Builders, Harper leads Jesse and the rest to where they are located but things quickly take a turn for the worse. 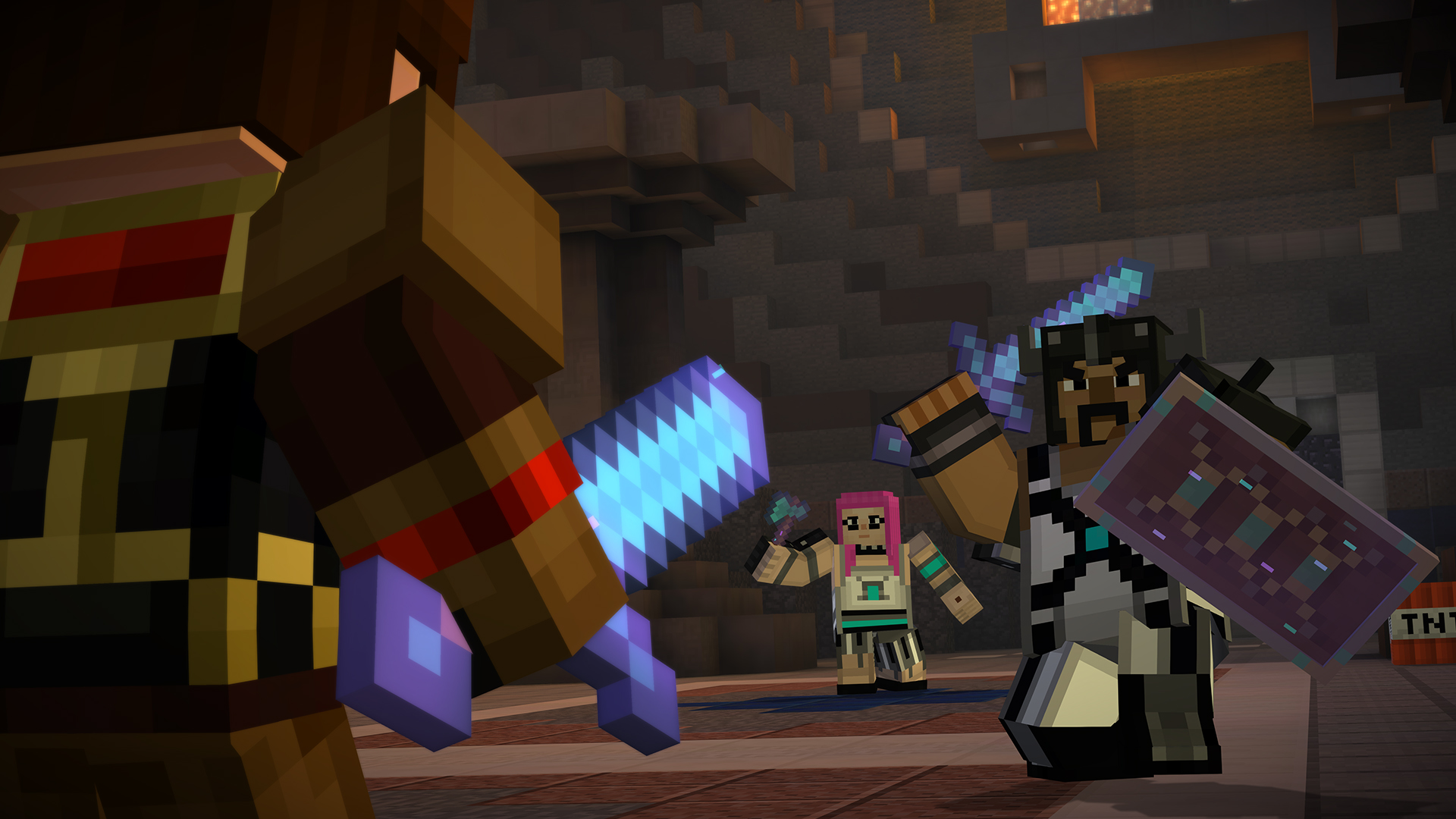 After being shoved through a strange portal by Harper the rest of the group finds themselves right in the middle of a gladiator match that fans of Minecraft will recognize as a certain type of competitive game users created to mess around in the early age of the game. Thrown into this area where everyone is  battling one another and death is a very real possibility, the group does their best to stay alive though it before the game is called to a sudden stop by the three spectators watching from above.

It turns out that the rest of the Old Builders have grown extremely power hungry to the point that they are holding these games for their sheer amusement and where death is nothing more than a hindrance as slain contestants respawn in designated areas. With no clear way out and these three holding the very thing that Jesse needs to return home, they are forced to accept the Old Builders’ challenge to complete the games and win in order to obtain the Atlas, though if they lose they’ll not only lose the most valuable item they’ve gathered on their journey but will also be forced to compete and slave away in the mine with no hope of escape.

A Journey’s End? places Jesse and the group up against some incredibly high stakes once again but unlike some previous obstacles that have been placed in their paths, the evil nature of the Old Builders is written in a rather simplistic way. While these characters have always been deemed as the greatest minds ever known and they certainly act like egotistical villains, players are never really given an explanation as to why things grew so far out of hand or why they even went down this path in the first place. 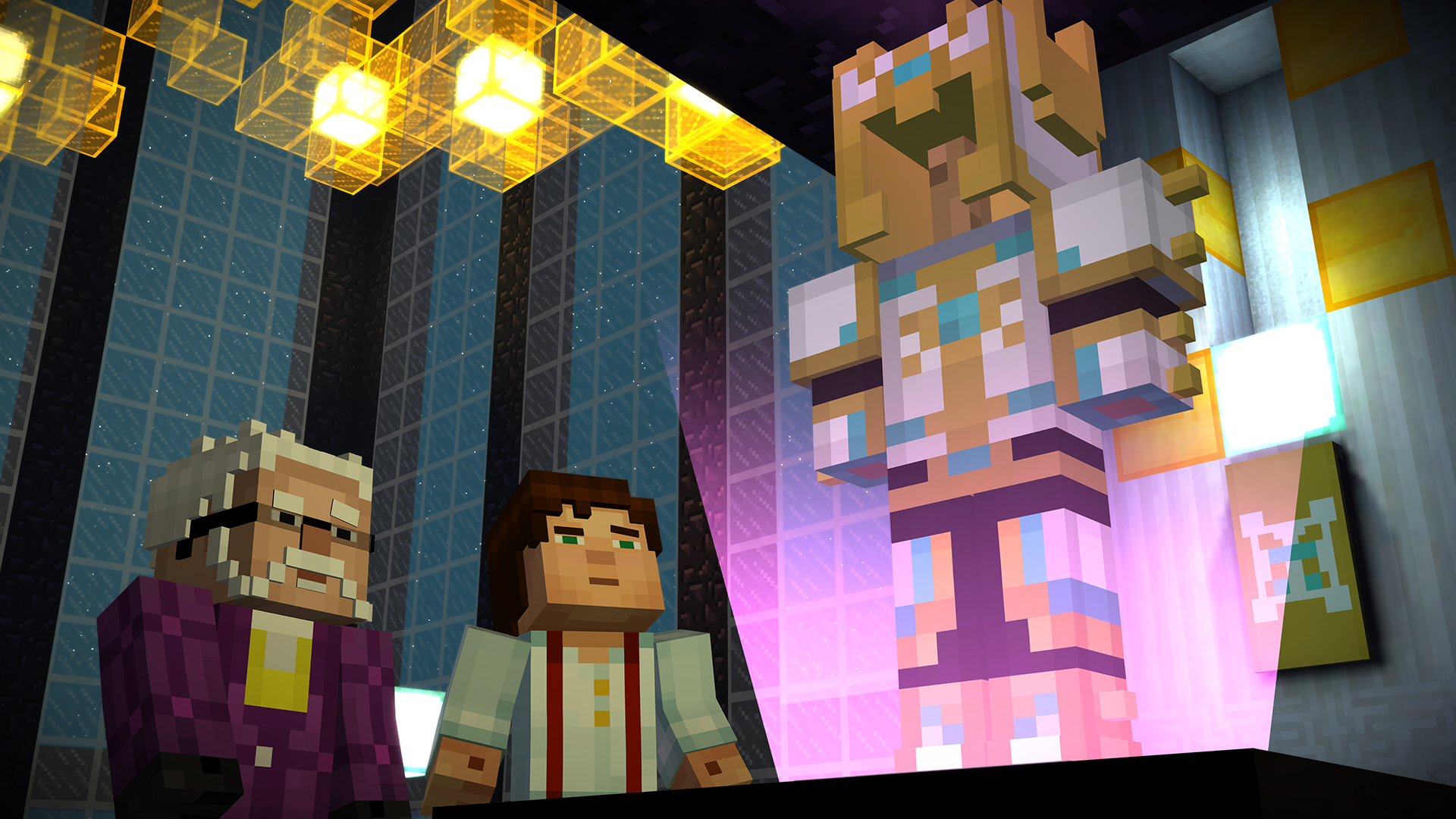 Once more players are also given a number of decisions to make throughout the episode and while one clearly sets who will be the player’s main partner throughout most of the episode, the rest of the choices feel rather basic at best, especially since certain events play out the same way regardless of what you choose. The new characters players are introduced to are given only a face value introduction and even the world itself is barely explored other than providing a big reveal that many likely would guess beforehand.

That being said, while A Journey’s End? never explores past the surface of these characters, the new ones that are introduced throughout the episode are handled decently enough to keep players laughing or interested in what will happen next as the group struggles to make it through the Old Builders’ twisted games, especially since the lead Old Builder is ready to go to any lengths to stop Jesse, but don’t expect a truly satisfying conclusion by the time everything wraps up.

While the episode does feature quite a few grandiose moments and plenty of great looking action scenes, the actual conclusion of the games as well as the way the story wraps itself up leaves quite a bit to be desired outside of a quick trick the title plays on the player. Character relationships never come into play in any form despite the fact that the series has prominently featured choices where Jesse had to choose between Petra or Lukas and even the way the story wraps up feels like a simple and inoffensive way to conclude the journey but also leave fans hope for a second season.

Going into this final episode players can expect a large number of quick time events and some minor exploration since, as mentioned above, the focus this time around is on gladiator style combat and games pitting Jesse against other teams trying to complete the games. This means that the number of quick time events focused around dodging obstacles in races as well as fighting against opponents is quite high, though these sequences do feel rather intense in nature which is a nice plus. 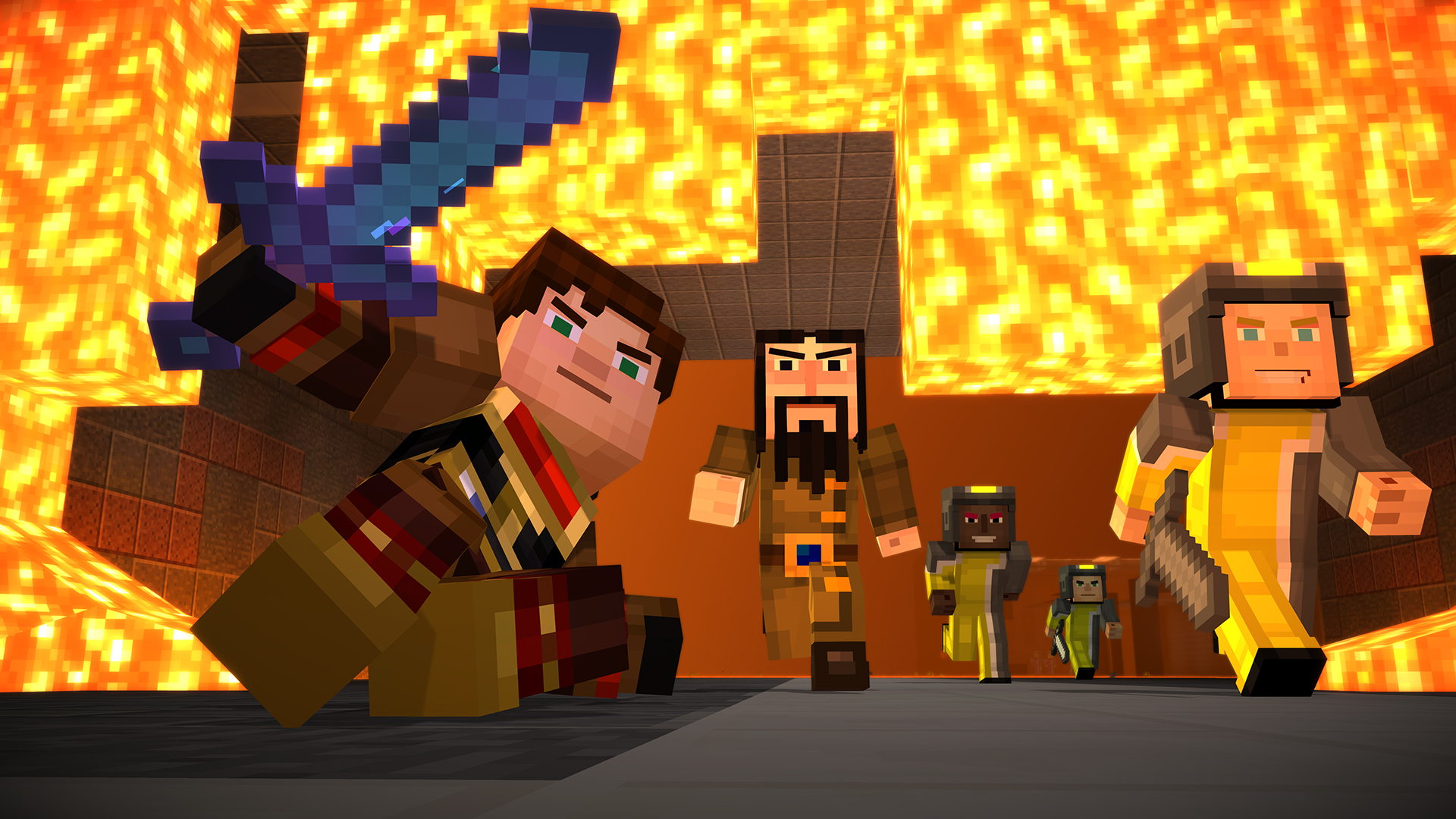 There are unfortunately no real puzzle elements this time around and players are only given a small area to explore before being shuffled along to the next story segment.

Surprisingly despite being set almost entirely in a world where the Old Builders have established themselves, the designs in most of A Journey’s End? are fairly standard as far as settings go. The main area shown is the village where the competitors stay and while the various arenas are interesting in motion they are plain in design. The only real interesting area is only briefly shown through an exploration segment though it must be said that the designs of the new characters this time around are nicely done. 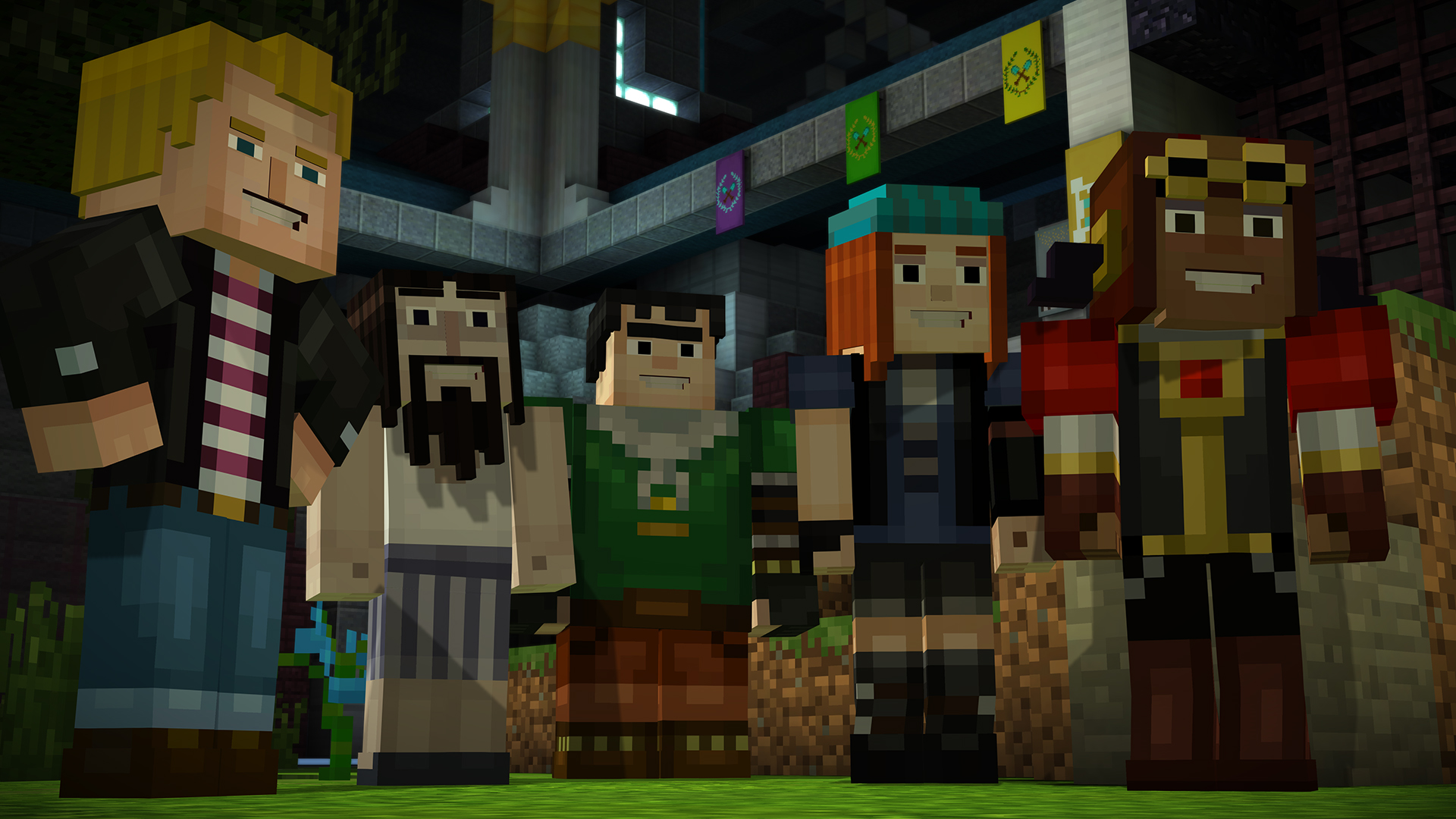 The soundtrack throughout the episode is about what fans have come to predict from the series and the voice actors continue to shine in their roles while the newcomers fit in well, with Ivor’s voice actor really standing out this time around with some of the funniest lines in the group and the core antagonist coming across as egotistically manipulative as he acts.

Minecraft: Story Mode’s final episode A Journey’s End? brings Jesse and the gang’s journey to a close in an episode that pits them up against villains long thought to be great minds that only end up being petty in the long run. Featuring some amusing humor and plenty of great action sequences, this final episode will keep fans interested throughout but being the conclusion to an eight episode long series, it concludes with a by-the-books finale that lacks any emotional impact.

As a standalone story Minecraft: Story Mode’s final episode A Journey’s End? works fairly well with the gang facing off against legends turned evil but fails to deliver a satisfying end to Jesse and the rest’s journey.
7