Less than five months ago we saw the release of Hatsune Miku Project DIVA X in the West and now fans of the famous Vocaloid and her friends are going to get a massive dose of Miku once again at the start of the year. Originally released as an arcade game back in 2010, updated in 2013, and given various upgrades over the years, Hatsune Miku: Project DIVA Future Tone was eventually released on the PlayStation 4 and now that Sega has brought this entry to the West, is it worth picking up?

In many ways Hatsune Miku: Project DIVA Future Tone feels like something that sets a different tone for the Project DIVA games. Rather than implement a story of any kind or place various barriers in the way of the player, the first thing that is done when starting up the title is a tutorial that gives players the run down on the various input methods to the familiar tune of “Ievan Polkka“ before throwing them into the vast array of options that this title has to offer. 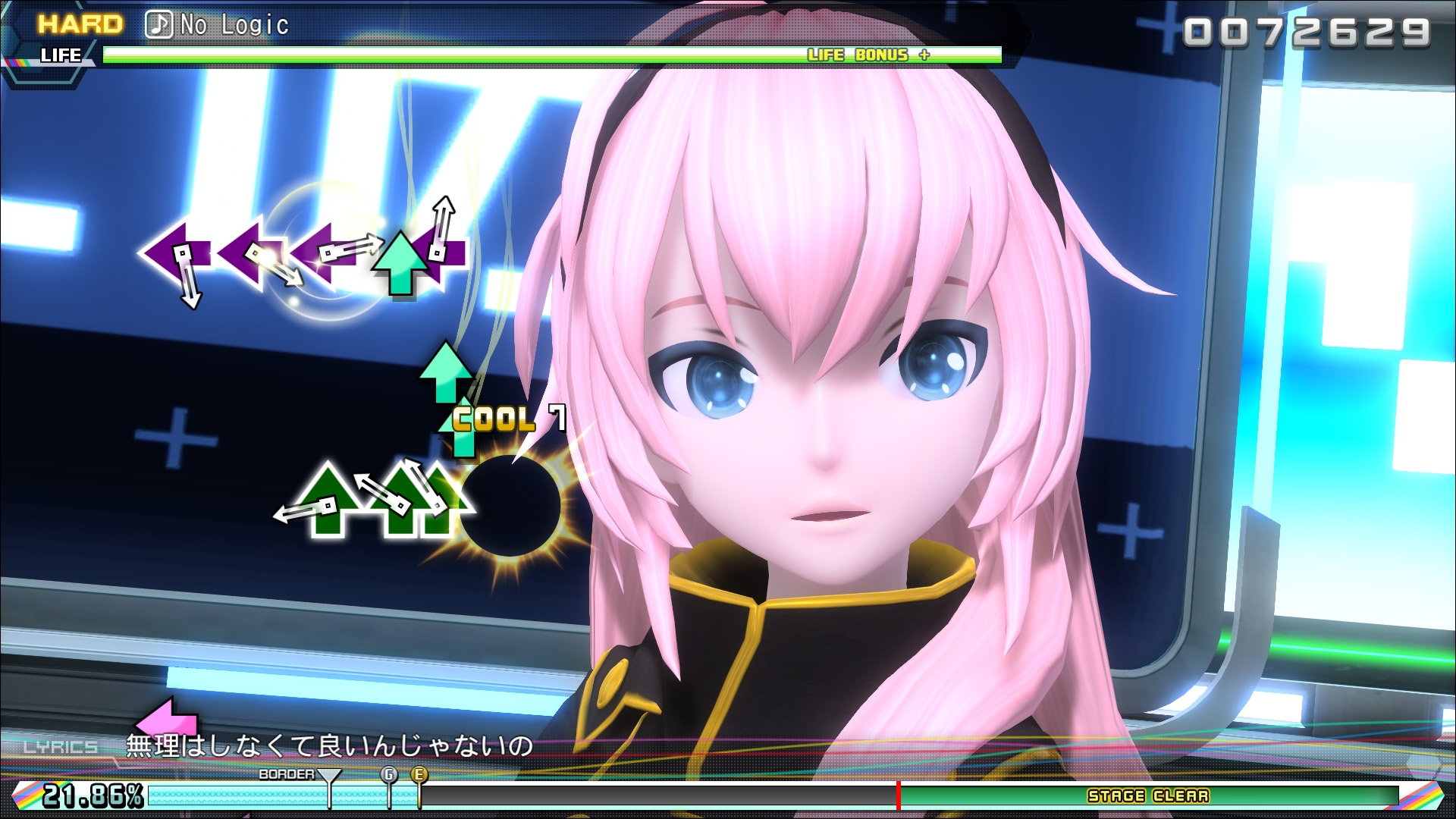 Now it is worth noting that Hatsune Miku: Project DIVA Future Tone is available in separate packs, with Colorful Tone and Future Sound being available for $29.99 a piece or together for $53.99 at a discounted bundle and it is fairly clear that unless you happen to dislike all of the songs in one of these packs, that picking up both versions is the way to go as you will find that over 220 songs are available to play right off the bat when both packs are purchased.

This may seem a bit overwhelming at first and believe me, it can be, but thanks to the ability to sort the songs alphabetically, by difficulty level, Vocaloid, and completion level you’ll easily be able to find which songs you want to tackle at any given time. Those who find specific songs they enjoy can easily favorite them with a tap of the touchpad making them easy to access at any given time. Now one thing that is a bit disappointing in this release is that while over 220 songs are offered in this game, unless you are extremely skilled or are fine using the “No Fail Mode” that prevents the player from losing, you will be quite challenged to play a number of these songs. 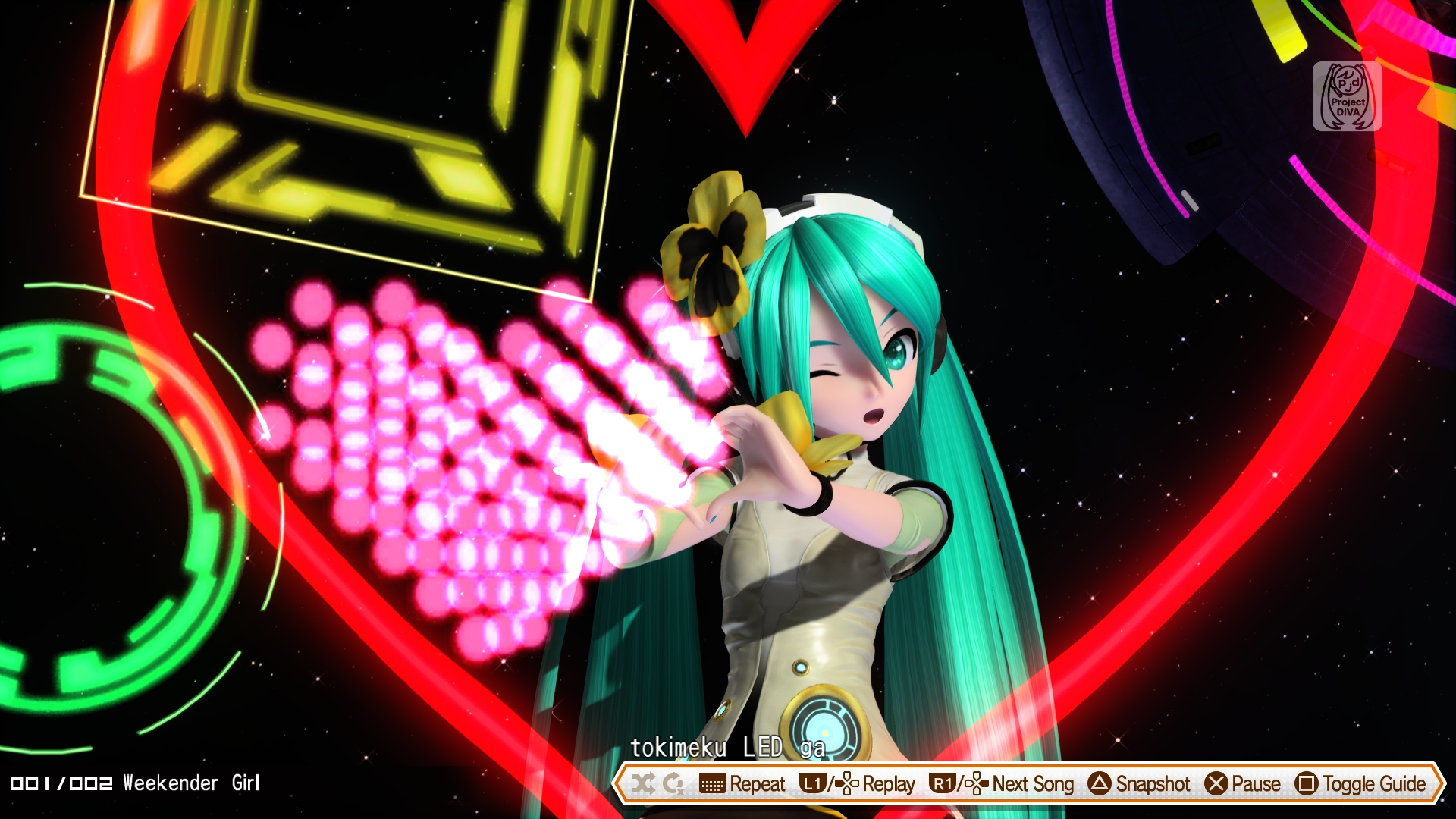 I say this because while over half of the songs are available all the way from the Easy difficulty level, the other songs are only available from Normal and a few are only available at the Hard level. This news may be disheartening to some since certain songs are not available on lower difficulties, which is an odd choice, but it is interesting to note though that every song can immediately be seen in music video mode if you choose to simply enjoy the performance or played using the aforementioned No Fail Mode.

If you do happen to be extremely skilled at the game, then you can add a little twist into the game by adding in various elements such as hiding notes, making them fly across the screen even faster than normal, or have them be surprise notes. There is even an Extreme difficulty level that isn’t accessible until songs are cleared on Hard so while things may be a bit unbalanced for newcomers, those looking for a real challenge can find it here in Hatsune Miku: Project DIVA Future Tone. 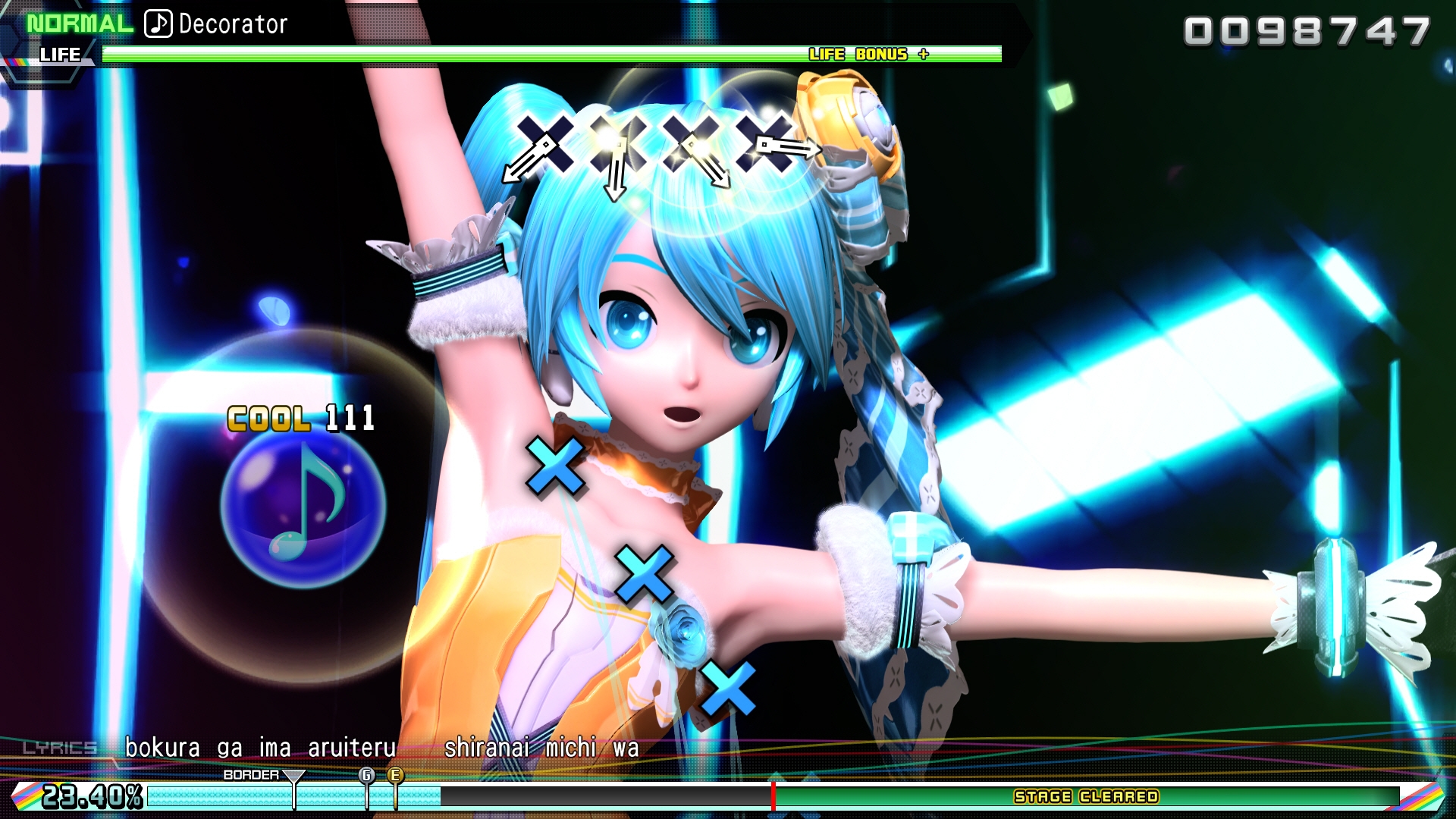 In fact, thanks to the controls of the game and the way that it has been adapted from an Arcade machine, this is one of the hardest games in the series so far. This is partially due to the fact that while there are fewer inputs to generally worry about, as the game generally uses only four of the face buttons at most, there are also a number of new note types to keep an eye out for. These include hold notes that can be held for bonus points, notes that must be input at the same time that generally are given a pop-up diagram of what to tap to avoid confusion, analog stick inputs, as well as swipes that make use of the touchpad. Touchpad notes tend to be fairly finicky to get the hang of as starting too soon can cause the whole note to be missed while ending a slide will give the player less points and possibly ruin a combo they would have otherwise been able to build up by timing their inputs correctly.

As you rack up points to complete songs, including sequences that allow the player to rack up large points and even trigger a stage effect, there are various levels of completion for each one with the player given points that can then be used to purchase costume modules, hairstyles, and a handful of accessories for the Vocaloids to wear. There are a massive number of costumes to unlock with points in this game and while many songs have unique costumes designed specifically for that song, which is shown as the recommended outfit in the shop when you enter it on a specific song, there are also various fan-favorite costumes that reference other Sega titles such as a Sonic costume, Valkyria Chronicles, and Space Channel 5. 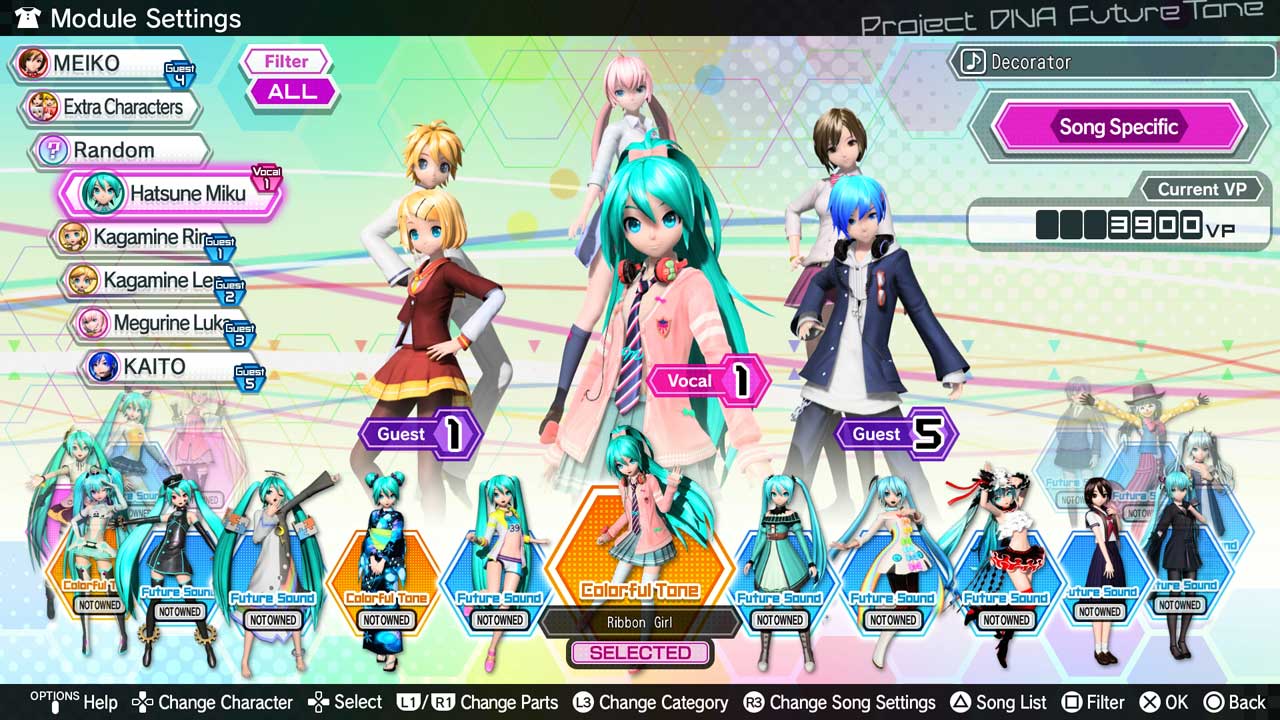 Unfortunately outside of the base gameplay mode and the outfits that can be unlocked and accessories that can be worn, players will find that Hatsune Miku: Project DIVA Future Tone doesn’t really expand much beyond that. This is in part due to it being an arcade port so the only other options available to the user are to compile a list of songs they want to play in a playlist manner and allow them to play like music videos, which I actually have running while writing this review. Those who enjoyed the little slice-of-life interactions with their favorite Vocaloids may be a bit disappointed by the bare bones nature of the game outside of the performances but the clear focus spent on the rhythm gameplay will delight fans of the genre.

As soon as players begin their first song they will recognize that Hatsune Miku: Project DIVA Future Tone is a big visual improvement over the core games that we have seen in the past. Thanks to their roots at the arcade, each of the character models are impressively handled and the music videos that they are set against are as flawless looking as ever. In  fact, many stages you remember will look basically the same while the Vocaloid dancing or performing the song will stand out thanks to the redesigns and the massive amount of costumes that players haven an option to select from. Unfortunately unlike past entries, while the lyrics have been Romanized into English letters Sega has not provided English translation for the lyrics in this entry. 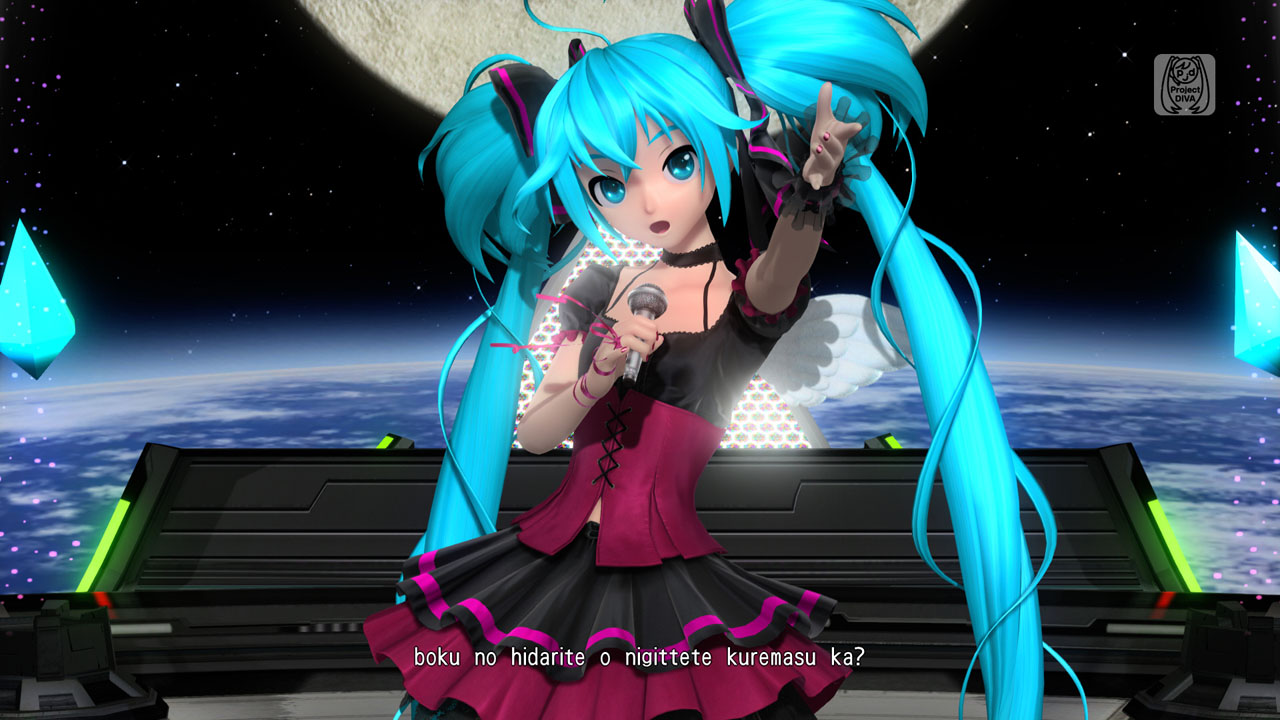 It is worth noting that while this game may not feature some of the most recent hit songs from creators; it does feature what many may call the greatest hits that the series has had to a certain point. Almost every popular Vocaloid song including some variants are included in this release and there are a wide number of genre to select from though players will need to listen to/perform some of these songs to find out how they sound for themselves as there is no sort option in this regard. With so many great songs to choose from, including some classic Sega tunes, and the outstanding looking videos they are set against that can be viewed at any time, players will be in for a real treat here.

Hatsune Miku: Project DIVA Future Tone may feel like it doesn’t have a whole lot of legs outside of its core gameplay thanks to the fact that it’s arcade roots leave it without any Vocaloid interactions or gift giving but there is really no need for that. Thanks to the fact that this title features a staggering number of songs to play and an exceptional presentation for every song, players will be more than happy with what is on display here, making it a must-have for fans of Hatsune Miku and Vocaloid music in general.

Hatsune Miku: Project DIVA Future Tone is a completely focused rhythm game that has a few odd decisions such as certain songs being locked to a difficulty level but otherwise provides a must have experience for Hatsune Miku fans.
9