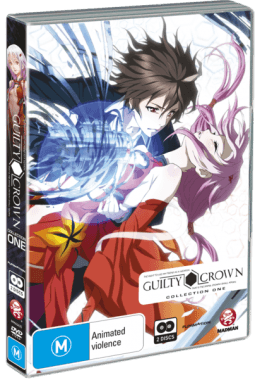 You know…I’m beginning to think the future isn’t going to be all that great, too many movies and series’ depict the future as something that is nice in theory but almost always turns into a dystopian hell hole and on that note I now present to you an Anime called Guilty Crown which, if you’ve seen he series, you’d know exactly what I’m talking about. It started its Anime run close to the end of 2011 and came to an end almost midway through 2012, fans loved the series for its fantastic characters, story and overall animation and even in 2013, which happens to be a massive year for great Anime titles, I feel like it still holds up in in a strong way. A comet, a plague, a dystopian future, crazy-looking weapons, mechs and a bunch of damn good characters! What else could you possibly ask for out of an Anime? 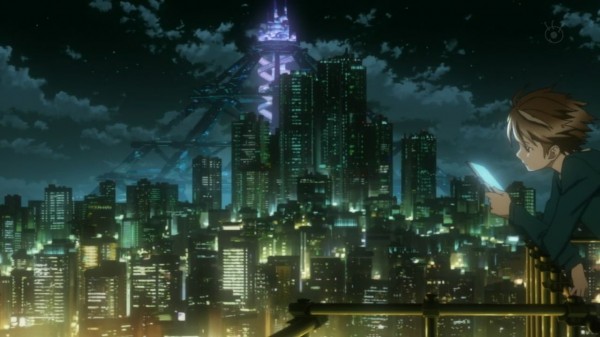 Set in a futuristic Japan that was once ravaged by a plague called the “Apocalypse Virus”, Guilty Crown’s story revolves around a high school boy and self-aware recluse Shu who one day finds him self in a bit of a predicament when he comes across a bleeding girl who just so happens to be the lead singer of one of his favourite pop idol groups.

It is revealed that Inori, the pop idol, actually works for a group of rebels called “Funeral Parlour” who have risen up against a mysterious and all-powerful government agency called GHQ who both looks over Japan with the intentions of eliminating what is left of the virus, unfortunately though they have a “take no prisoners” attitude that leads to a great deal of brutal deaths, they will do anything they can to have Japan be “secure” and “Funeral Parlour” don’t particularly like the way they’re going about it. Back to Shu and Inori: Just as the two characters meet, the GHQ hit the scene and take Inori away, what was left in Shu’s hands is a small robot that accompanied Inori, that small robot contained an incredibly fragile and extremely powerful bio-weapon called the “Void Genome”. 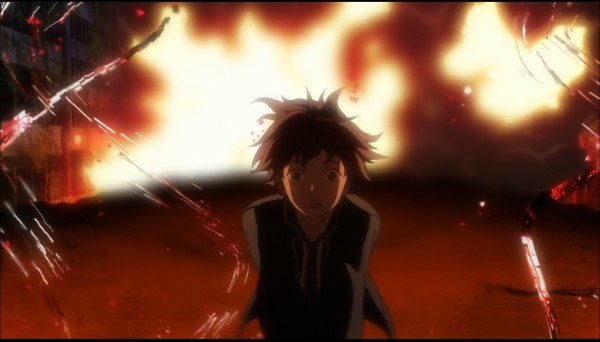 Shu, trying to do something selflessly for once, goes on a small quest to try and return this vial to its rightful owner. After a few altercations and a harsh punch to the jaw, Shu finally meets with the leader fo the rebellion, a man named Gai.

After an explanation as to what is going on is finished the rebellion is attacked by a bunch of GHQ Mechs, Shu realises that Inori (who has escaped by this point in time) is in danger and leaps to her aid as the robot fires a small round, the vile in his front pocket breaks and he absorbs the “Void Genome” which gives him the power to reach into a living humans soul and manifest a weapon that is unique to every person, he uses this to take down the mech and now he must choose whether or not to join “Funeral Parlour” in their attempt to once again liberate Japan or to hand himself over to the GHQ in the hopes that they don’t use his new found power for evil rather than good. 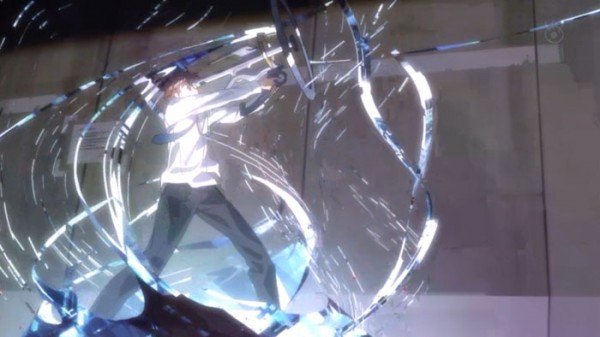 Guilty Crown has an extremely interesting, deep and incredibly unique storyline that gets a lot of inspiration from titles similar to it, the great thing about that is the fact that you can tell certain Animes were used as inspiration but there was no direct copying or cloning so, in the end, whatever was inspired by another series was taken, tweaked and made its own. The mixing of science, the supernatural and a semi-cyberpunk feel was done extremely well and, in many cases, something with so many sub-genres doesn’t always go down too well, in Guilty Crown’s case…it was done extremely well and was executed almost perfectly.

There are no characters that are incredibly annoying, nor are there any characters who you, as an audience member, feel to be redundant in their own series; every character has his or her place, they all have their own jobs and they all bring something great to the series even if that thing may be quite small. Finally we have a main protagonist who is self-aware; he knows he is awkward and anti-social, he also knows exactly why he’s like that and he’s doing his very best to change and grow closer to the ones around him. The great thing about him as a character is that, over the course of Collection One, he actually makes a very noticeable and gradual change. 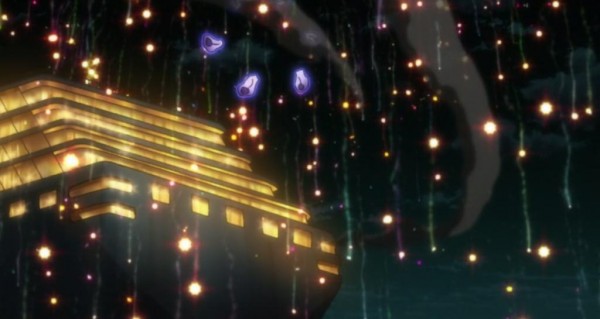 The progression of the story as well as its pacing is also done very well, the introduction of characters and situations come at varying degrees with varying levels of urgency that really works well for this series because even though these characters are in constant danger, there are times where they must step back and regroup before they run out into the metaphorical line of fire and get taken down.

The focus isn’t always on Shu’s ability either, the first few episode dedicate themselves entirely to it but that is only because it is a brand-new topic and focal point. For the most part the spotlight is put on the cast as a whole, every single character has problems that they deal with alongside the events of the series so it’s great to see that the team behind Guilty Crown remembered that Shu wasn’t the only character people care about despite the fact that he may be the most necessary in the ongoing war. 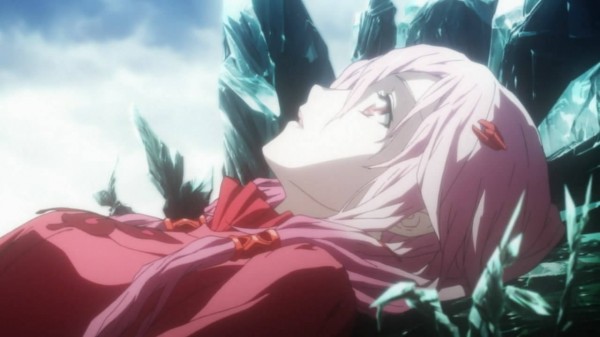 I have a real soft-spot in my heart for stories that are set in dystopian futures because with those stories come some odd and interesting visuals that, if done correctly, really make a lasting impact with the audience. Guilty Crown seems to be one of those series’ that knows exactly what it’s doing and does it damn well! Visually this series is absolutely fantastic, not only have environments and scenes been designed incredibly well but the colour palette used throughout suits the series’ overall darkness to a tee.

The animation throughout the series is fantastic and you never really see a big dip in quality from scene to scene, usually the calibre of animation stays at a constant high even when the production team decided to combine both CGI Animation and traditional animation, it was done so well that you don’t entirely realise it straight away but even once you do it’s not like it dampens the visual experience, if anything it puts it in a new light. All the characters are designed well, they all look fairly normal and there’s no real character that stands out too much, apart from one or two. What I liked about the characters in this show were that, even though this is set in a distant future, the series wasn’t populated by super odd clothing nor did they have strange hair styles, they kept it as normal and “realistic” as possible while still giving themselves room to add flair. 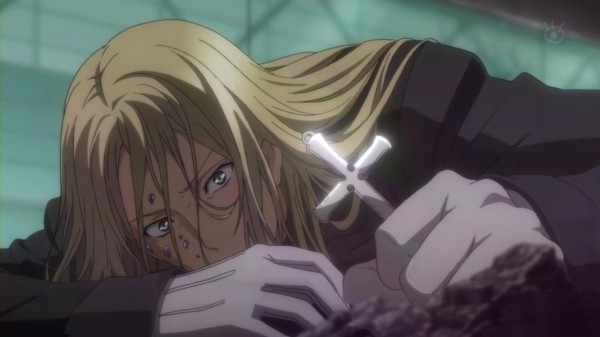 Both the music and the voice acting within Guilty Crown – Collection One came across in an almost perfect way. Different genres were used throughout and they all seemed to not only fit in like puzzle pieces but they were also very well-timed. I also got the feeling of certain characters being represented by certain types of music, it was very subtle but also very effective. Music actually played a big part on the series, considering one of the main characters was a part of a pop idol group, they had to get it right and they absolutely did.

Even though J-Pop isn’t my “cup ‘o’ tea” I did find myself enjoying the simple ways in which it fit in with the character, those around her and in the final minutes of the last episode of the collection. As I mentioned quickly above; the voice acting for the characters within Guilty Crown…they’re perfect. Each voice actor and actress brings their own emotions into the role, you can hear it in their voices, in their screams and in their overall interactions between each other. I can honestly say that this may have to be one of my favourite English voice acting casts to date…and I’ve seen a LOT of Anime. 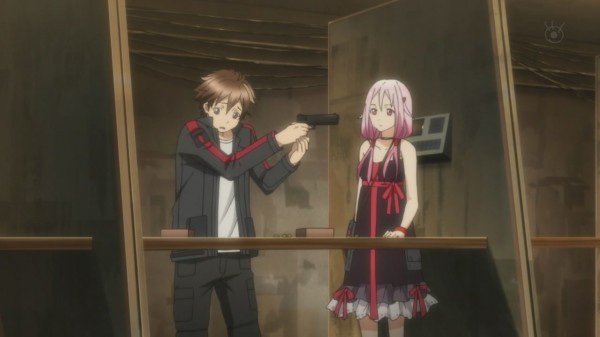 I was very surprised to see that this release came with a great deal of extras, my surprise didn’t entirely come from the number of extras either, it more came from the fact that the extras are actually decent for a standard release. Guilty Crown – Collection One features the usual things like Japanese TV Spots and textless sequences as well as episode previews and what not, I enjoyed the commentary episodes that came along with the release, being able to hear exactly what the some of the cast and crew thought about the series and having them share some of their experiences really adds a layer of depth to the series that couldn’t have been noticed if not for the commentaries.

A featurette titled “Into The Void: The Creative Vision” and an extra called “Guilty Crown 4-Panel Theatre” are also present within the release, they too add a so much to the series. Look, I’m just extremely impressed at the fact that this is but a standard Anime collection release yet there are this many extras, it really shows just how much time and effort was put into this series. 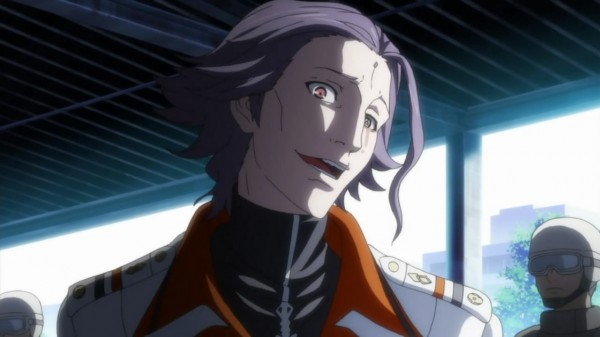 Collection One was an incredible experience from the first episode to the last, it featured eleven heart-wrenching episodes which is something I haven’t experienced for a while, it made me care about the characters within the story and it actually showed some form of growth and development which is odd to see in series’ that feature an awkward teenagers as their protagonists. This series seems to be more than that and all I can say is that I hope the collections that come after this are just as good, these first 11 episodes rocked me and I can imagine they’ll rock a whole bunch of other audiences too. Obviously because of its mix of certain sub-genres it will not appeal to one hundred percent of people but I can image a great deal of Anime watches will find this fantastic. It has everything, even a whole bunch of great extras that aren’t usually present in standard releases…I don’t know what else to say. It was a delight to review and I hope a lot of you enjoyed it as much as I did. 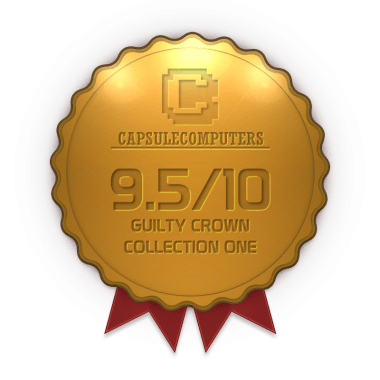