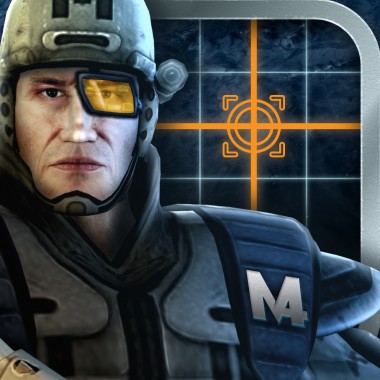 Overview
When thinking of strategy games, most tend to think on the lines of Command and Conquer or even the fantasy driven Warcraft/StarCraft series. However, the one major difference in strategy titles is whether or not it is occurring in “real-time”. Unlike the StarCrafts, Frontline Tactics is completely turned based which isn’t necessarily a bad aspect. The title additionally offers many elements from other genres such as a tiered customization system normally seen in role playing games.

Becoming a social game norm, the free-to-play feature has the ability to bring in potential consumers. Like so many others, Frontline Tactics basically presents the base of the game as a demo and allows players to buy into the game’s merchandise to increased the survivability of their characters. Everyone can play the game for free, but should you dish out the extra cash for the extras? Let’s take a look.

Story
An oil-riched nation by the name of Fahrahn is being taken over by a small military sect led by the crazed propagandist Akhali Muhamar. Being a larger supplier of oil to the Western nations, Fahrahn cannot be compromised by any means. Elite soldiers from around the world have been called in to take special care of the matter. Hopefully, it doesn’t turn into a world war.

The basis of the storyline seems feasible but hardly offers the consumer anything new other than a change to the country’s name and military tyrant. Based in the near future – 2025, Frontline Tactics could be the prediction of an ensuing oil crisis since the world powers failed to transition over to renewable/environmental friendly resources. None-the-less, this event is something that has been done already and military action only solves the problem short-term.

Beyond the background of the title, the story becomes lost as each mission becomes repeatable. Soon enough you have saved the village or died trying over 10 times only to purchase better body armor. In this light, the story is not supported and merely becomes a background feature with the theme of “go get ’em tiger”. Don’t you forget your grenades now!

Gameplay
In the beginning, there were two but not Adam and Eve. Frontline Tactics starts you off with a potential squad of two personnel. One squad is supplied with proficiency in small arms, and the other is proficient in sub-machine guns. Upon entering your first mission, you can tell that each squad has an effective gun range: yellow, orange, and red. Depending on the weapon that the squad equipped, the effective range can be short, medium, or long range. For instance the small arms squad will have the most effective short range and decrease in effectiveness as the target moves away. However, long range equipment like sniper rifles depend on long range for the most damage. 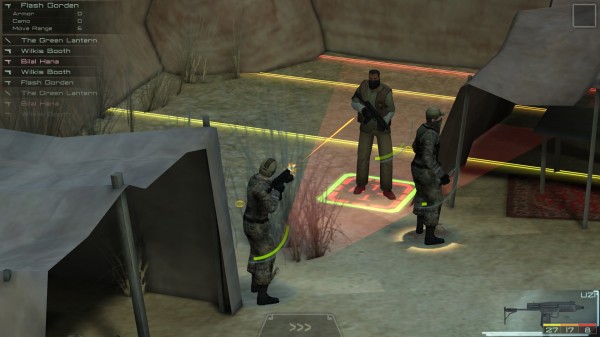 Weapons like the sub-machine gun have a ‘cone of fire’ which dictates the spray area of bullets. This comes in handy when placed near three enemy squads in a tight space. Precise movement may be necessary, but mowing down a group of enemies with a sub-machine gun becomes essential early on. Other weapons that provide radial damage are stun and frag grenades. A stun grenade can deter an opponent from their next action while frags deal a heavy dose of damage. Save the grenades for grouped up enemies because it may result in a repeat turn (stun) or instant kills (frag).

At the main menu there is an option for the Barracks. The Barracks opens up to each of your squads and allows you to customize them in junction with the credits you acquire through missions. For instance, the standard weapon for a small arms squad is the USP. We can unlock the next tiered pistol – Burghetti – for 88,000 credits. But we won’t stop there. By paying an additional 100,000 credits, we can unlock a laser sight which increases short range damage done by 5 but reduces camouflage by 1. Armor is tiered the same way with the higher tiers requiring the purchase of the lesser tiered item first. You can’t just buy medium armor without purchasing light armor first! Wait, that is a little silly. 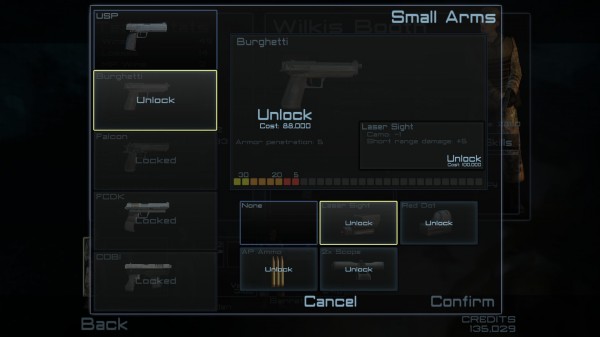 Up next is the available mission types. The six available types are as follows: Eliminate All, Survival, Area Defend, Area Capture, Area Control, and Area Escape. Not all mission types are available from the start but can be unlocked as missions are completed. Eliminate All is just as it sounds. As you begin your mission in one of the repeatable maps, your objective is to kill or be killed. The developers suggest you gang up on single targets to weed enemies down to zero.

Survival mode can be one of the hardest modes to play through. Depending on how many squads can be launched, you may end up sending your highest armored squad to the wolves. Running around becomes your best option along with the use of camouflage. Surviving 20 rounds can be devastating if reinforcements arrive, but heal up with a medic if you can and get the heck out of enemy crossfire (double damage). 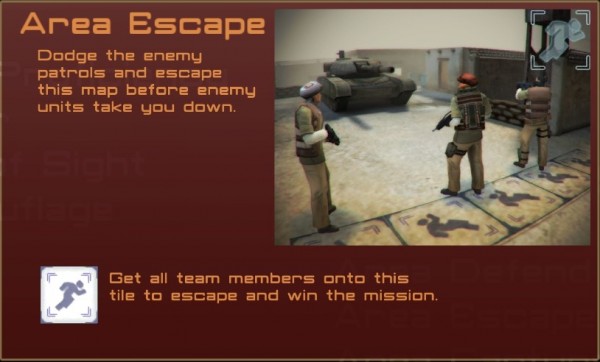 All ‘Area Modes’ act on the same principal. Your squad must be in a certain area to defend, capture, control, or escape. Only by making it to these markers and performing the required feat will your squad become victorious. For example, in Area Escape the player must escort each squad to an escape area marker (looks like a running man). Once each of your squads have made it to a marker, you will receive the end mission scenario. Failing to get all of the squads to an escape marker will end the mission.

Multiplayer should be one of the key selling points to this game. However, all that remains is a lag filled disappointment. When entering a multiplayer game, you can search for a random game as versus or co-op. Players can also create a game, yet the created game is also randomized. This gives players zero control of what map or type of mission they would wish to play. Players that get a game started can expect long waiting times between moves. I was typing in the very, very small text box to another member of the community while playing an online session. We were able to send messages back and forth discussing what our screens were displaying in accordance with the moves we performed. It would seem like minutes passed before I or the community member noticed a difference on our screens. This is one area the game needs serious work. 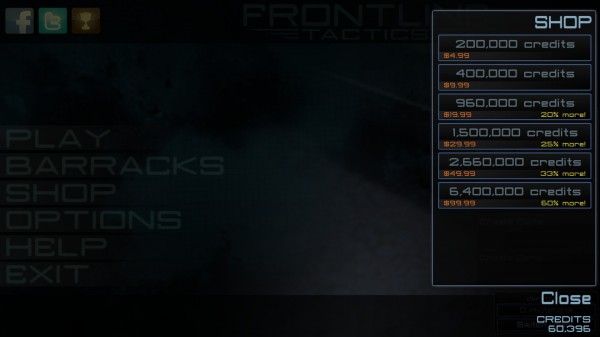 Remember that players can earn credits when completing missions? Well, this free-to-play community offers players the ability to purchase credits to gain an advantage. Like most social games, Frontline Tactics offers a complete listing for credit purchases. I could see this being used to help players potentially complete the game with all of its achievements, but I would certainly not do so to gain an edge over online combatants with the current system in place. To compare the price differential, here is the gap from smallest to largest amounts: 200,000 credits = $4.99; 6,400,000 = $99.99 (60% more). To put this into perspective, it would take 1,400,000 credits to upgrade a squad into heavy armor alone. Imagine doing this to three squads; you just tripled that amount to 4,200,000 credits. If you were to win missions grossing minimum 20,000 credits, it would take you 210 missions to reach 4,200,000 credits. I’d honestly play the 210 missions versus spending $99.99.

Audio/Visuals
A sleek user interface combined with a straight forward menu system emanates a professional appeal. Frontline Tactics does this well by having easily maneuverable menus and large bold text/icons, so players cannot ignore the click-able items. Additionally, the transitions between menus flow smoothly and offer little distraction. As a sub-menu is selected, the main menu pulls away to the sides of the screen as new icons appear quickly from the center body. By exiting back to the main menu, the center body shrinks until it disappears as the main menu icons return from the sides. I believe the goal was to make the menu system as functional as possible considering the different platforms the game can be played on. Another lasting impression to look for is the computerized grid landscape of the level before entering the mission. 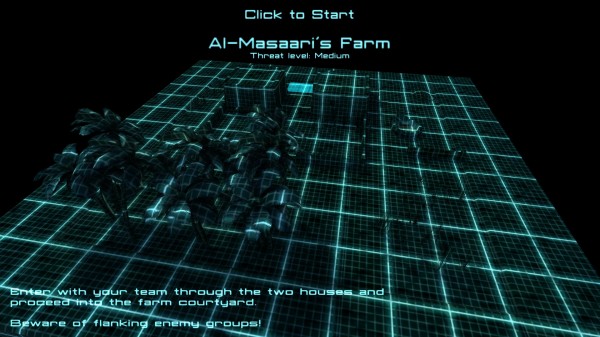 Certain visuals in the game, however, tell a different story. The developers should have taken what they put into the main menu system and incorporated similar aspects to the mission aesthetics. One such problem with the user interface is the text box for players to talk amongst each other. First, the box is too small and does not allow the player to type a lengthy message – only 40 characters. This hardly proves worthwhile when typing out sentences. Second, there isn’t a true defining characteristic to decipher your text apart from another player. The least that could be done is to have a player’s name before the sentence or even a change of text color.

As mentioned in the gameplay portion, several missions become replayable thus limiting the variety of total environments. Grinding through enough ‘unlocks’ warrants more maps to be unlocked, but the repeat commences thereafter as well. A random map generator could be quite useful in this instance to give players something new to always look for.

Main menus are infamous for looped audio intros, and the main menu audio for Frontline Tactics is not any different. In fact, you can distinctly tell when the loop is done and starts over from the beginning. This gives me that aggravating feeling like falling asleep to a movie only to wake up in the middle of the night to the repeated intro. It’s torture! Thankfully, the audio clip is long enough that it shouldn’t have to repeat often.

Sound effects present me with a mixed feeling as a variety would be welcomed, but the overall deliverance is acceptable. The sounds provided from selecting menus and score accumulation accentuates the grid/technology theme. Whereas the sounds coming from some of the equipment – pistol and sniper rifle – sound terribly alike. Character voices are obviously the same along with their appearances. All that seems different is the type of armor/equipment they are currently wearing. And where are the female soldiers?

Overall
What does the game do well? The game start-up offers a promising aesthetic feel as it has successfully ported to several platforms. The menu systems work well in accordance to visual and audio effects proving that user interface does have value to a player. Furthermore, customization within the Barracks can be fun to mess around with to create unique squad builds. In addition, the ability to unlock content by winning every ‘5’ missions sets a viable goal for players to accomplish.

Frontline Tactics does, however, fail to meet player expectations in some key areas. Online multiplayer requires additional support in areas such as: lag, level/threat select, mission select, and community user interface. Additionally, the credit purchase system would hold more merit if the game could provide a fully functional online multiplayer. Justifying the purchase of $20 or more of credits for solo missions and achievements would be like selling peanuts to a peanut factory. The player is going to acquire the credits eventually and would only need to purchase $5 worth to gain an achievement for purchasing from the store. With all that in mind, even the single player portion can become awfully repetitive by playing the same levels over. The redeeming quality is that it is free to play.