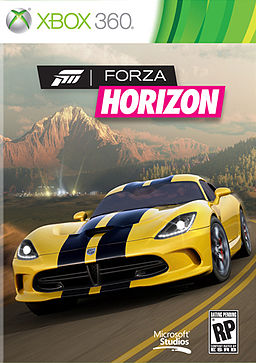 Overview:
The Forza Motorsport franchise made a name for itself for it’s realistic racing experience and accessible control scheme that allowed anyone to be able to pick up and play with ease. After four iterations of the Forza Motorsport series with only middling differences and advances between them Turn10 Studios were placed in a difficult position. Do they continue with the successful formula or do they roll the dice and try something new? Forza Horizon is the result of Turn10 choosing the latter option.

Forza Horizon itself marks a radical departure from formula and takes the Forza franchise to places never dreamed of. In the process of such a vast and full-frontal change, replacing menu after menu with an open world to explore, introducing creative race types and level design, Forza Horizon becomes a beast all of it’s own, redefining what we have come to know of the Forza franchise. 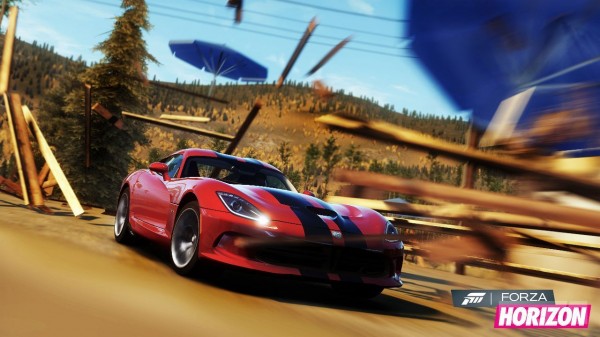 Gameplay:
What Turn10 Studios have done with Forza Horizon is nothing short of brilliant. They have taken the addictive gameplay of the Forza Motorsport series and mixed it with shades of Burnout and Outrun to great success. The result of which is a open-world racing game with an arcade racer feel with infectious gameplay to boot. I know that it might sound somewhat contradictory for it to feel like an arcade racer although it is set within an open-world but Turn10 have struck the perfect balance between exploration and enthralling racing fun.

The centerpiece of Forza Horizon is without a doubt it’s single player mode which of course places you within the games immense open-world. Set within Colorado, Forza Horizon’s Horizon Festival and the land upon which it takes place is without a doubt one of the best worlds conceived within a racing game. The world moves along, even without your paying attention, rival cars drive by heading to their own destinations, day turns to night, planes take flight and people live, laugh and cry. The world lives and breathes in Forza Horizon and that in and of itself is an impressive feat that I do not see being replicated anytime soon. It has it’s own distinctive personality and makes cruising around through this vast environment a pure delight with discoveries at every corner. 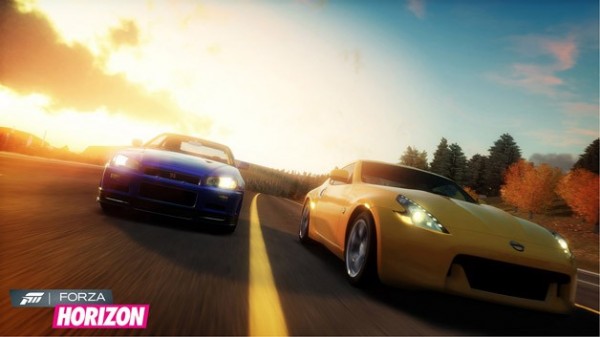 Single player mode plays fairly simply, placing you into the open-world and leading you from race to race, with more becoming available to you as you advance through races and become more renowned. In keeping with the living world of the Horizon Festival, the more popular you become the more enemies you make with many rival racers wanting to shut you down just when you are building up some steam. Some of the rivals offer to challenge you, even willing to put their car on the line. This is one of the many ways in which to unlock more cars. Seeing the cars themselves presented before you with the challenge of defeating them and the well developed personalities behind the wheel, there is indeed a big incentive to collect cars and develop as a racer. My favourite thing about rivals in the game however is the way in which Horizon goes the extra mile with developing characters that you genuinely want to defeat. Some of the rivals you encounter (main rivals as I prefer to call them) are fully voiced and will make radio appearances to slander you and ultimately challenge you, they each have their own distinct look and personality making it all the more fun to take them down.

Other than your rivals there is also a variety of other characters throughout the games story mode such as the lovely Alice who serves as your ‘assistant’ if you will as well as your love interest and number 1 supporter. She speaks to you through a large portion of the game as well as helps you out in general. Besides Alice you also have Dak the mechanic who does most of the work on your cars and the radio host that remarkably never seems to repeat himself. I was stunned by how deep and comprehensive the radio feature was in this game, you have 3 main stations covering several genres mainly rock, pop and dance. But that’s not the impressive part, what impressed me most is how real it feels. You have banter between the host and his plethora of guests as well as comments upon how the festival is progressing and even mention of highly specific details of your own personal advancement which left me wowed by the amount of detail that has been put into what most would consider an afterthought of a feature. 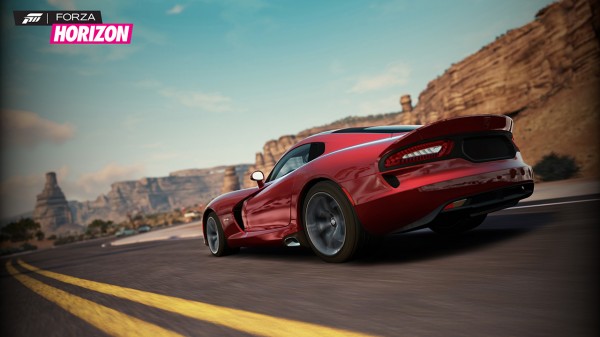 The core gameplay in Horizon is essentially no different than previous Forza games, you still can play the entire game with simply the triggers and analogue stick which makes it so incredibly accessible to casual gamers. This control scheme is a trend that Forza started and defined which now has been picked up by many of racing franchises. Forza really is the leader in the racing genre in terms of innovation no doubt about that.

Overall the single player is the real focal point of the game itself and a lot of emphasis is put on progression and development. It works incredibly well because Forza paces itself in such a way that you just don’t want to put it down. You finish one race and suddenly 3 more pop up for you to partake in, there is really no down time and that is only to Forza Horizon’s advantage. You just want to keep on racing, it’s truly infectious gameplay at it’s best. 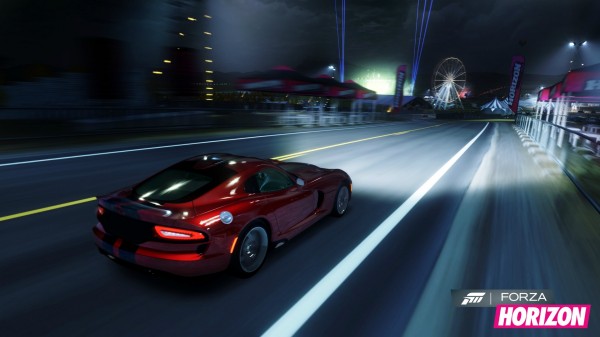 In terms of multiplayer, Forza Horizon is great, but does suffer a few minor issues that may be patched in the future but at time of publishing were still found in the multiplayer portion of the game. First of all there is an issue with collision detection in the online multiplayer, when a large amount of vehicles collide I found the game do something perculiar which had me glitch through other vehicles and spin out of control. It was very odd and did halt the experience signifcantly. Fortunately though this problem was not at all common and the game experience overall is addictive and straight up enjoyable. I struggled to put the multiplayer down and head back into the single player simply because its just that fun. My only other gripe with the multiplayer is that split-screen multiplayer seems to be gone from the Forza franchise now which I find to be rather disappointing as Forza was always a great split-screen couch play experience. Unfortunately Turn10 decided against the feature for Horizon, which is disappointing to say the least.

All in all both single player and multiplayer modes both provide a great deal of content to explore and experience in what has to be one of the most comprehensive racing games ever made. There is just so very much to do here and there has been a lot of detail put into making things feel like they never stop moving. The Horizon Festival lives and breathes and that is what makes this game truly an experience unlike any other. 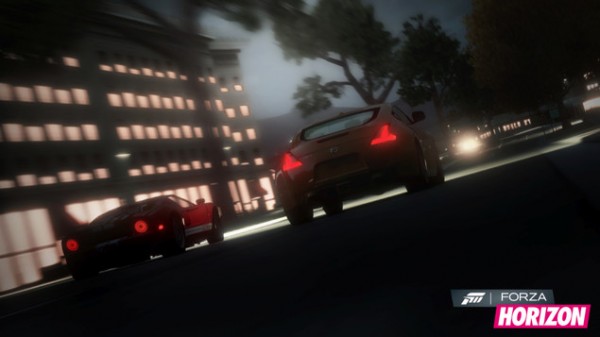 Visuals and Audio:
Forza Horizon has taken the slick and pure look of previous Forza titles and turned them on their head instead opting for more flamboyant and expressive aesthetics. The setting of Colorado is captured in all it’s majesty alongside the colourful pizzazz of the Horizon Festival itself. Visually it is just a pleasure to watch, let alone play. The incredible amount of detail is a sight to behold, with truly realistic car designs and environments.

If that’s not enough, the game features an epic soundtrack with a wealth of variety in terms of genre and musicians. Whether you are a fan of rock, pop or dance music, Forza Horizon has you covered and gives you the option to switch between the soundtracks with the radio feature. I particularly enjoyed the rock soundtrack personally which featured great songs from bands such as The Arctic Monkeys and You Me At Six. Besides the soundtrack, the game features a plethora of realistic sound effects that add a great deal to the overall experience and keep you heavily immersed in the games world. 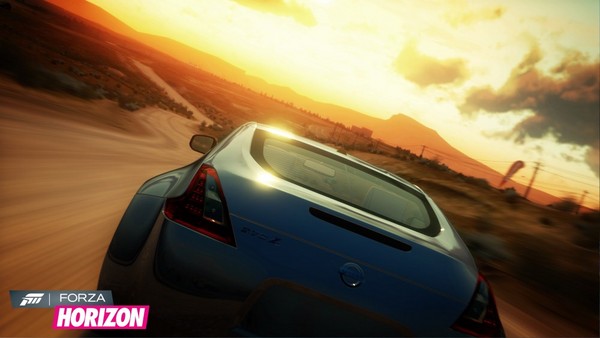 Overall:
Horizon is a game that feels radically different to what we have come to know and expect from the Forza franchise. This however is not even close to a bad thing. The game marks a decidedly different route for the franchise and admittedly a route that needed to be taken to prevent Forza from becoming too stagnant. Horizon is a pleasure to play and is easily one of the best racing games to grace consoles this generation. Whether you are a Forza fan or just a racing fan in general  Forza Horizon is a game that must be experienced. Turn10 Studios have truly done wonders here and all it took was a little broadening of horizons.