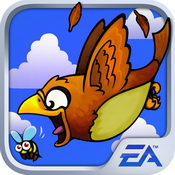 Overview
EA’s Fly With Me starts where games like Tiny Wings left off, using the core “tap to flap” gameplay and expanding on it to make a more rounded, fully-featured title. 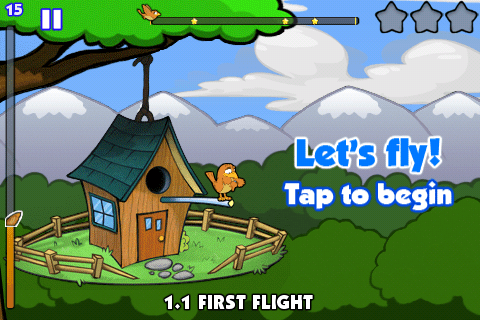 Story
There is a short cutscene at the start of the game, describing the basic premise of the story. A hive of bees inexplicably attack a neighbouring birdhouse, bothering it’s feathered occupant, sunbathing in his garden.

This is where the game starts. In some sort of revenge, the bird decides to fly around eating said bees… and dodge obstacles… and trees… and pick up the golden stars and gears that float around each level, before flying through a vertical wall of stars and landing on your house’s perch. As you do. 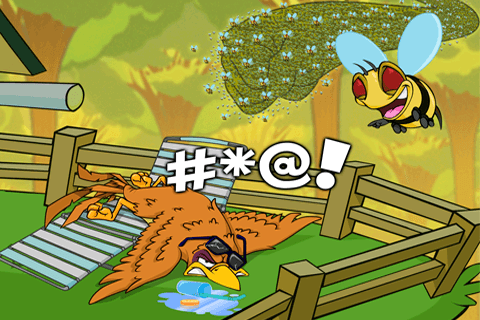 Gameplay
As I mentioned, the controls consist of a very “tap to flap” mechanism. Each flap grinds down your stamina meter on the left of the screen, which you can replenish by eating bugs. If the stamina meter bottoms out you can no longer flap, and so plummet to your doom, and have to start the level over.

There’s a level progress meter displayed across the top which is useful for seeing how much farther you have to fly to complete the level, as well as seeing when a star is coming up. Stars are, of course, needed to unlock future stages. 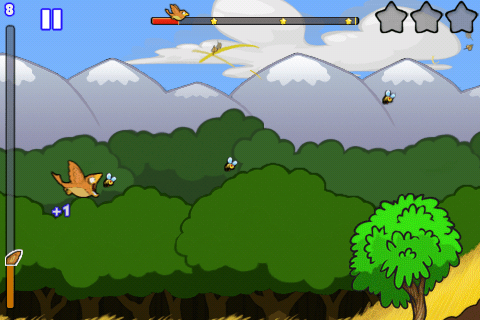 There are obstacles that can stop you in your tracks, killing you instantly if you don’t avoid them or handle them correctly. There are also some helplful features, which are introduced as you progress through the levels, pushing you forwards and allowing you to conserve energy, or floating you upwards, giving you some more time to play with before falling to the ground.

You collect gears to eventually unlock a robotic bird, which makes the levels far easier, and the game also sports an in-app purchasing setup, offering to take your money if you fail a level a multiple times in a row. 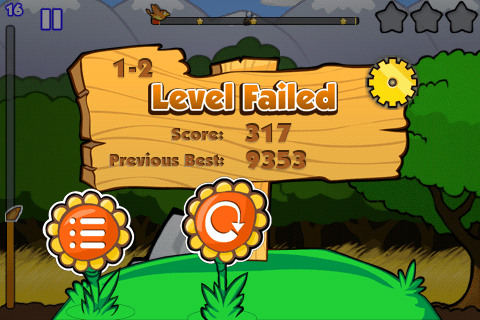 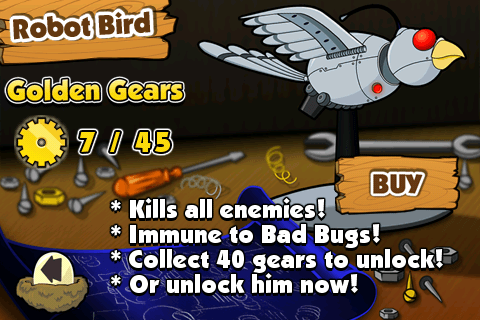 There are 3 stages, each with 15 levels and numerous helpful and harmful features added as you go along. There’s also an infinite challenge level for each stage, and a purchasable “Kid Mode” which makes things easier for children; less baddies, that kind of thing. 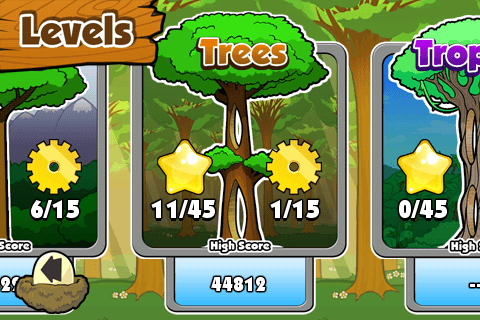 The production quality of this game is off the charts, as I’ll explain below… that said, the game just isn’t that fun to play. With most arcade-stlye games, there’s a “feeling” they want to convey… with Tiny Wings, it was the feeling of soaring through the sky and keeping your speed up… with Angry Birds, it was seeing an entire structure demolish itself in a chain-reaction you set off. You get a feeling of being in control; your success or failure is all hanging on your skill at controlling your character on the screen.

In this game there isn’t any such “feeling” to draw you in. Most of the time you’re not soaring through the air, and even when you float into a gust of wind which carries you around the screen in loop-de-loops and such, there’s not any feeling of exhilaration, as it’s nothing to do with you. When you collect the stars and gears there’s no effect on the gameplay to reward you for it; if you happen to be going in the right route you’ll pick it up, and if not, then you’ll miss it completely.

And when you accidentally touch the screen when you didn’t mean to and smack into a tree or spiders web, then you instantly die. The same goes for running out of stamina. When the levels start to get longer, this can get real frustrating. Some levels require you to examine the placement of the various features and plan your flaps perfectly to even make it to the end. But this is a casual game… you don’t really want to be calculating the airspeed velocity of an unladen swallow, here.

Audio & Visual
As flawed as the game design may be, the way it has been implemented has been top-notch! This is some of the best art, sound effects and music I’ve experienced in an iPhone game. 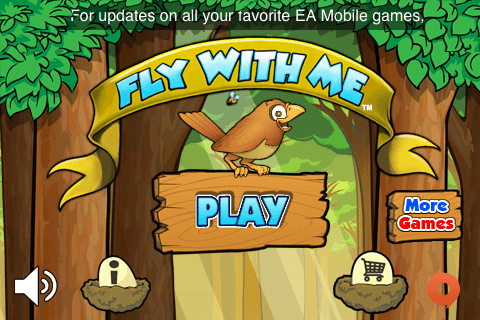 The pure liquid awesomeness of the vector art is a joy to behold. The backgrounds are detailed and atmospheric. The birds, bugs and obstacles are wonderfully rendered. All of the animations are solidly executed in a smooth, cartoony style, and really bring the game to life.

The music plays happily in the background, and the sound effects emphasize every action happening on-screen, making for a nice, pleasant overall experience. Even when you die, a nice little guitar riff introduces you to the “Level Failed” screen encouraging you to pick yourself up and give the level another go.

It’s just a shame the actual gameplay doesn’t fulfill all the joy and fuzzy-warm-feeling the production design promises. If I was rating this game based on Audio and Visuals alone, I would undoubtedly give it 10 / 10. Alas, audio and visuals alone does not a game make.

Overall
Some people may not mind the game’s flaws, or even forgive them considering the rest of the production is so wonderfully constructed. But for me, this game just doesn’t have anything to keep me interested. There’s no satisfaction in completing a level, picking up stars, or dodging the bad guys in this game, which, again, is a real shame considering the art and audio is so joyous.

The production values do their best to carry this game, but ultimately it’s hard to find a reason to keep playing.