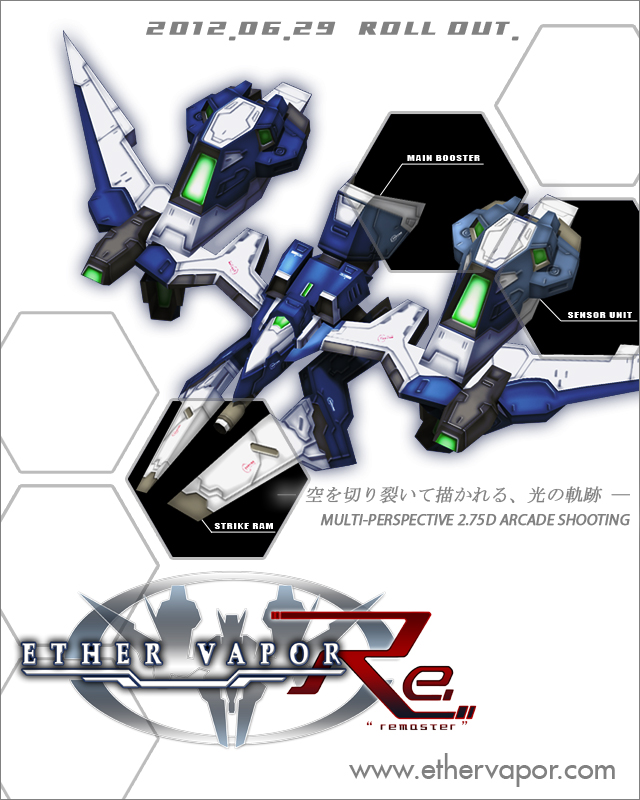 Arcade 2D shooters used to be a thing of the past, or a thing that would only be released not as a full title. This, I believe is something that is wrong with the industry and Ether Vapor: Remaster is the reason that I believe this to be true. The game itself is a fast paced action 2.5D rail shooter that is very similar to games like R-Type, Sol-Deace and many others.

While the game does has it’s flaws, it is an incredibly fun experience. Within this review I hope to have convinced you on why I believe this is so. So onwards, into the meat of this topic.

The story of Ether Vapor: Remaster follows a young pilot that appears to be in some kind of experimental aircraft and is hellbent on seeing the destruction of a particular device to end the a war between massive factions that has seemingly engulfed the world. Along the way he encounters various forces from either side of the war and is constantly within strife because of this. However, early on we see the hero team up with a young female pilot from the Lydia nation named Sana. 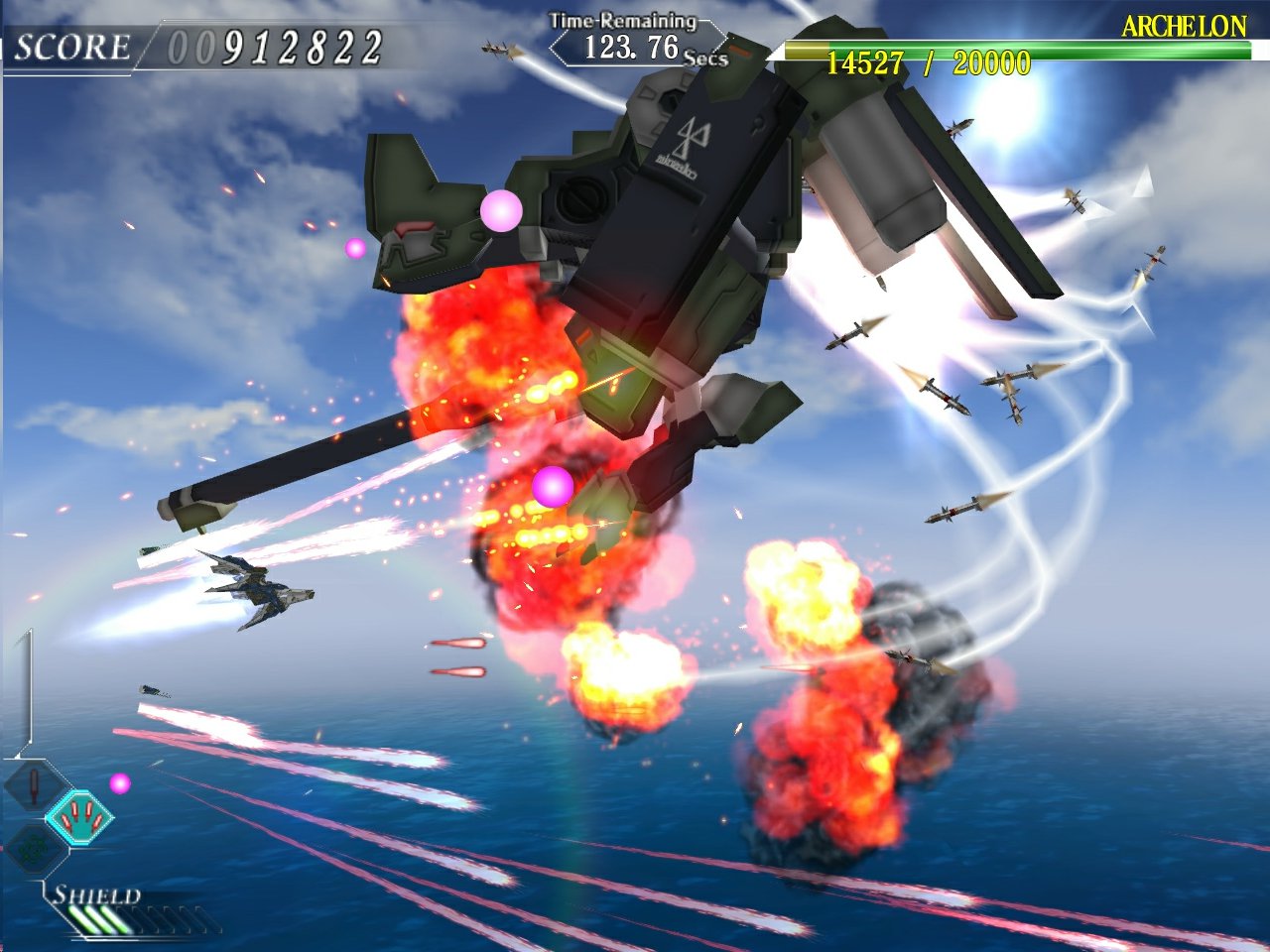 The story, I felt, was a pretty standard affair, existing only to excuse the gameplay and to give players a reason for playing through the game. I mean honestly, that’s what a videogame story is and the one presented in Ether Vapor is a good example of that. I think that players will enjoy the story for what it is, even if it is a bit simple and scantily laced throughout the game.

However I do have a bit of a gripe with the story and that comes in the form of the main character, Luca. I mean seriously, I have rarely come across an unlikeable main character in a videogame, but this guy makes me want to jump into the game and give him a taste of my pimp-hand. For example, in this one scene an enemy pilot comes up to him and asks him to explain himself in a pretty peaceful manner and all of a sudden Luca is is all like (paraphrasing a bit) “I’m a whiny, angst-filled teenager and I have a sore back so I’m going to make fun of you and then shoot at you a lot”. There are a few examples of this happening in the game, the lead character is a douche.

Other than that, the story is pretty good for what it is and if you don’t like it, you can turn it off on your next play-through. How cool is that? 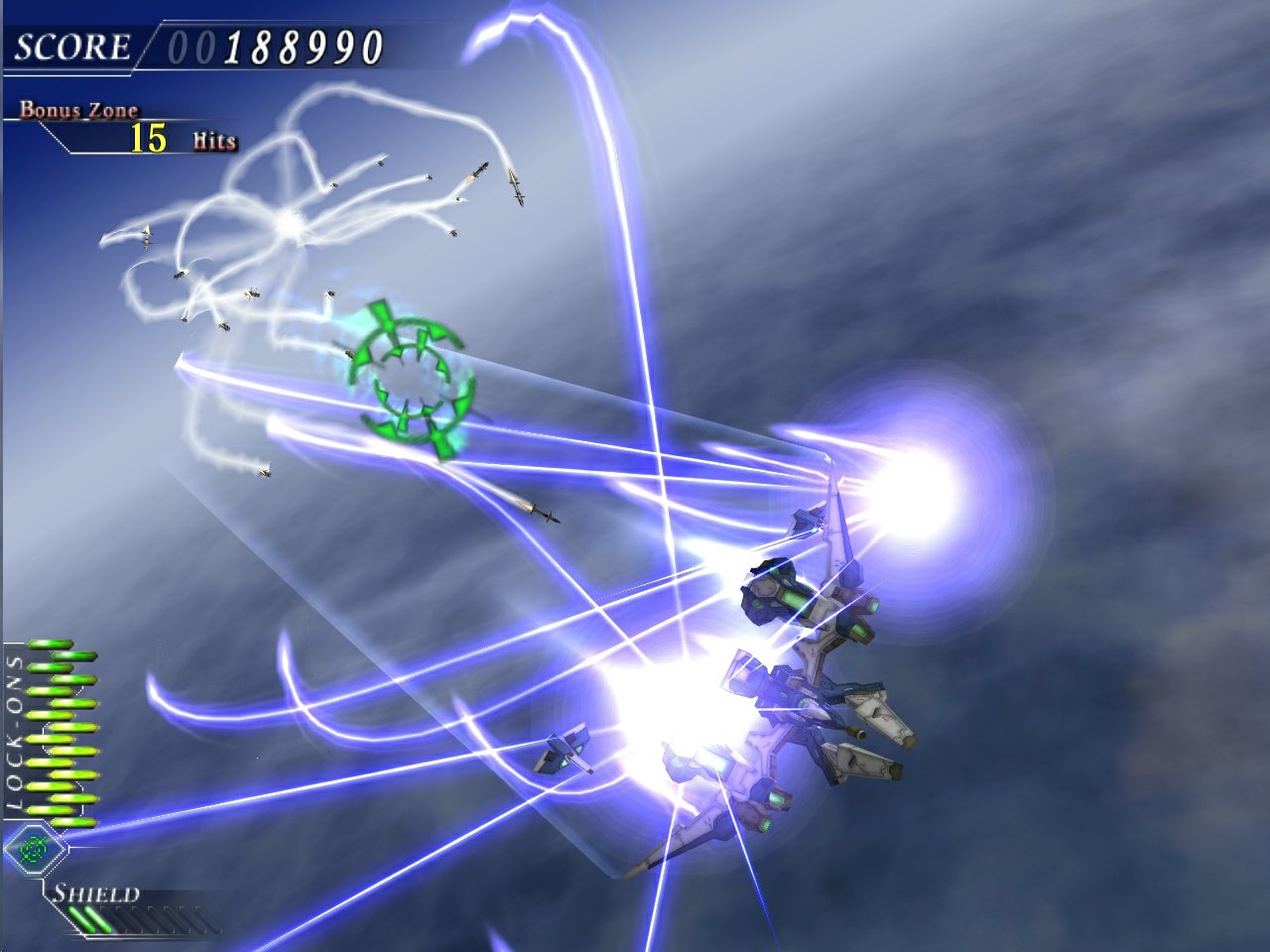 I make this game sound incredibly simple, and that’s because it ultimately is. Don’t take this to mean that the game lacks any kind of difficulty, because it does. Trust me on this, it is -incredibly- difficult. Who knows how many times I died trying to get through this game. If you’re somebody afraid of failure, has a short attention span or lacks the will to learn, you WILL NOT like this game.

Like most games that require any kind of skill to beat, players will find themselves constantly trying to learn how a particular level works. This is so that they can not only survive, but can also achieve the highest score for that stage. I comfortably predict that a lot of players will fail a lot, replay the entire game from the beginning over and over only to find that they’re slowly mastering the levels that they’re continually going through. This is how you know a game has a decent design behind it, you want to get good. 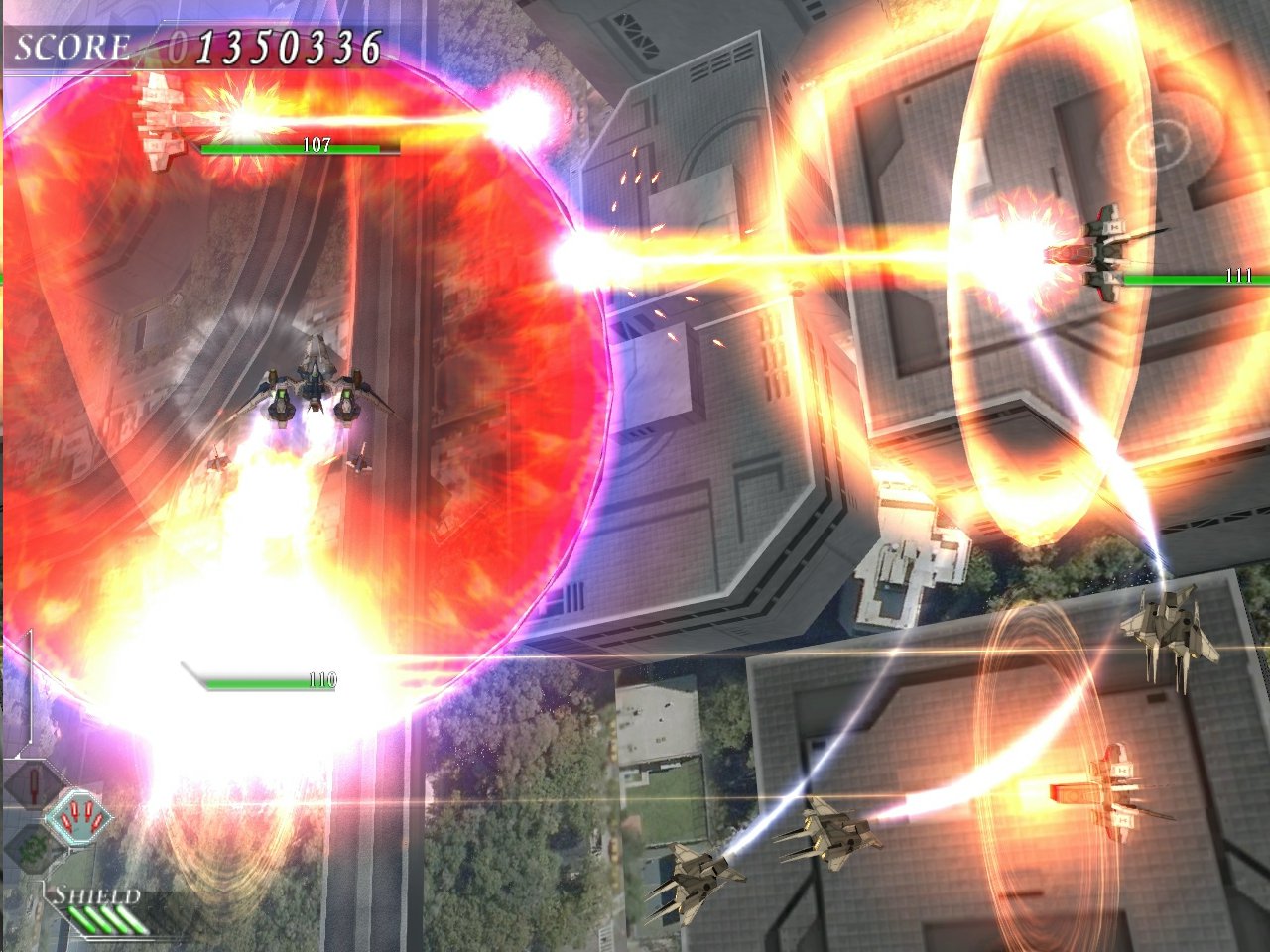 The one gripe that I have with the game is that you start the game with no shields or ‘credits’ to continue the game with. You instead have to earn these by travelling further and further into the game, or by dying a lot. I honestly still do not know which one of those two methods are the actual way to earn credits and shields, but they are the way, somehow. Also, while you’re playing you get an additional shield for that playthrough by earning a certain amount of points (60,000 by default). So getting better at the game is definitely of benefit to the player.

Visually speaking, the game isn’t a technical masterpiece. The game is very much a work that shows a small team was working on it, and had to make some compromises due to budget, time and a whole lot of other constraints. This is not to say that the visuals are bad.

What I really like about this game is that even though the graphics aren’t super-HD, Battlefield 3 and Crysis experiences, they’re still pretty detailed and accurately represent the world presented within the game. For the kind of game that it is, the visual style worked really well. 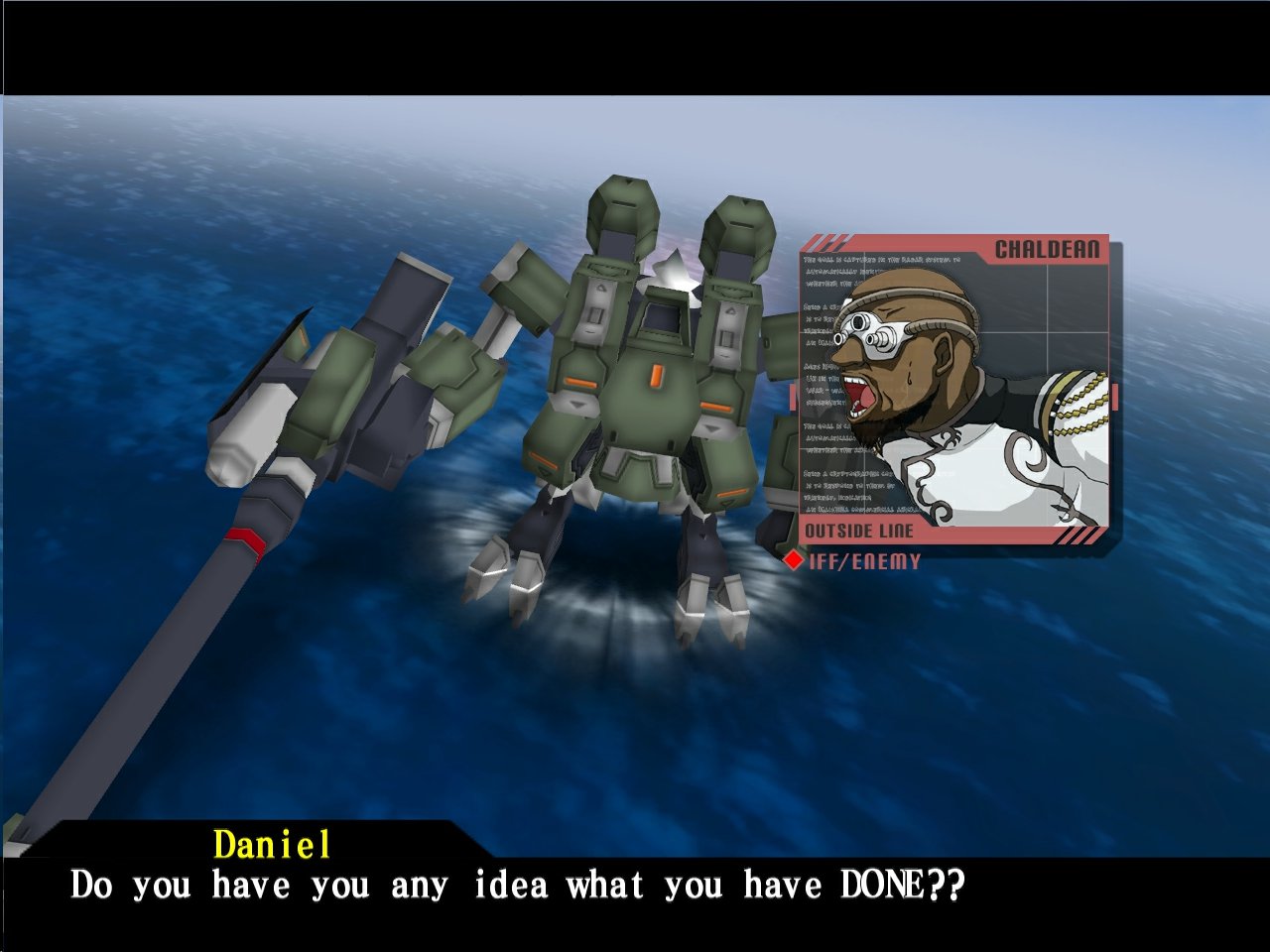 The character designs in this game are pretty good, with the exception of the main character. I don’t know why, but his limited facial expressions often didn’t match the context of what was being said and as a result I felt that it hindered the visual effect of what could have been better portrayed.

In Ether Vapor: Remaster there is a set of incredibly cool sounding effects and background music. Each of the levels has their own unique soundtrack which give them each a nice and distinctive feel. The soundtrack is also incredibly catchy and well composed.

Each of the various weapons in the game sound pretty believable, but also carry that kind of sci-fi feel that fits in with the games theme. Players familiar with other games of this type will find the sound effects familiar and fitting in with the genre.

Ether Vapor: Remaster is an excellent 2.5D sidescrolling rail shooter that fans of the genre should be sure to pick up and enjoy at their earliest convenience. Players will probably love the awesome background soundtrack and vehicle designs. Anyone who loves the feeling of conquest after adversity will definitely keep on coming back for more.