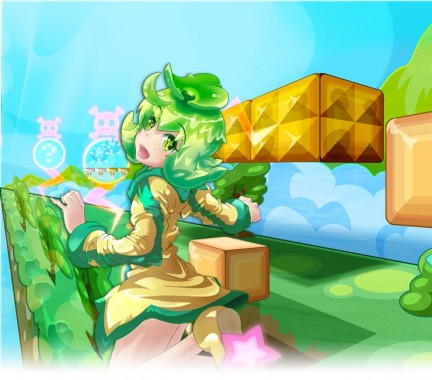 Eryi’s Action follows the story of a girl named Eryi as she quests to recover her stolen watermelon. However, as you’ll find out when you play this game, the quest is not as easy as it sounds.This is because this game is much closer to a game like I want to be the Guy than it is to a platformer like Super Mario Bros. Skill is definitely required. Find out why below.

Eryi’s Action features a very light storyline. In-fact, as far as I made it into the game, there was very little mention of it at all. Granted, I didn’t -beat- the game, but in all the levels that I did finish, there was very minimal story interaction.

From what I can tell from the game, A girl named Eryi had her watermelon stolen and she must embark on a quest to get it back. However, I believe the game to have an actual deep and meaningful story behind it. The story isn’t about Eryi at all, but rather, it’s about the amount of effort, planning and eventual defeat of the player over and over again. 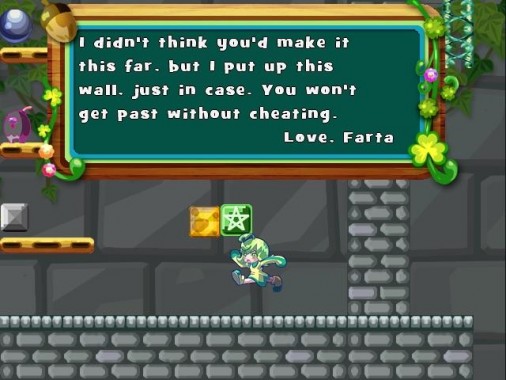 To be honest, I don’t think this game needs a deep and meaningful story behind it simply because what little story there is, is primarily used as a way to kick the game off. The reason you would play this game is because of its overall difficulty and challenge, not for a deep and complex narrative. After-all, you’d probably never reach the end if you were only average at gaming.

So to recap, the game has an incredibly light storyline, and is more about the personal struggle between man and game than it is about Eryi and her melon. If you’re the gamer that needs a deep storyline, or a yeah-bro style action cinematic storyline experience, you are looking at the wrong game. You’re also playing games for the wrong reasons.

So, as you’ve probably gathered from the above portion, this is a game that is incredibly difficult for any player to have to play through. And really, that’s what makes this game so enjoyable. 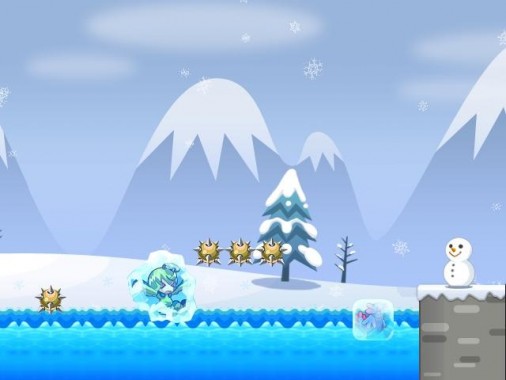 If you’re a gamer that prefers to cakewalk through games, not really have to think and just run forward to shoot more enemies, then this game is definitely not for you. For instance, as early on as the first level you are already forced to think outside of the box, memorise every single step of a level and master the controls; else you will die. And you will die a lot.

This game is best probably best described as a platforming game. At least formally, anyway. Informally, the most apt description for the title would be something like: a masochists wet-dream. I mean, really, this game is for people who really love to learn through punishment. One mistake, and you’re dead. I, myself, found this game to be a great way to relive stress though. For some reason swearing at your monitor and pointing at it viciously is actually a relaxing experience.

So you’re probably wondering what it is about this game that actually makes it difficult. Well, it’s not so much the control scheme or the way the character handles. It’s most definitely the way that the most innocent looking thing is really a deathtrap waiting to kill you. Do you want to know how many ways you’ll die? Well, let’s look at it like this. There is a part of the games overworld map that will kill you. Yes, you’re not even safe moving between levels. 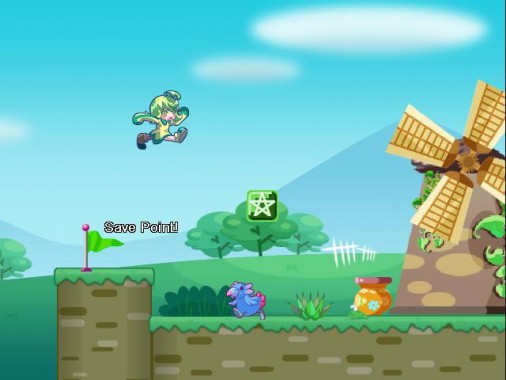 Obviously this means that you will have to master a level before you can actually finish it. Making mistakes and learning from them are what this game is about. Just make sure you learn from them. You can always look up a walkthrough, but if you haven’t actually learned from it yourself, you’ll still probably die.

Just remember that it’s okay to admit that the game has beaten you. So long as you come back stronger and smarter, you’ll eventually have this game beat. If you’re lacking in determination or if you find no pleasure in pain, you may not like this game. I personally love it, but that’s just me.

The visuals in Eryi’s Action are something that I enjoyed immensely. The game features a cartoony kind of visual style that reflects a kind of innocence to the game that is directly in contrast to what the reality of the game really is. I mean, if you were to look at a screenshot of the game, even if it was of one of the most player killing scenarios in the game, there is simply no way you’d deduce that this game was a deathtrap of death and more death. 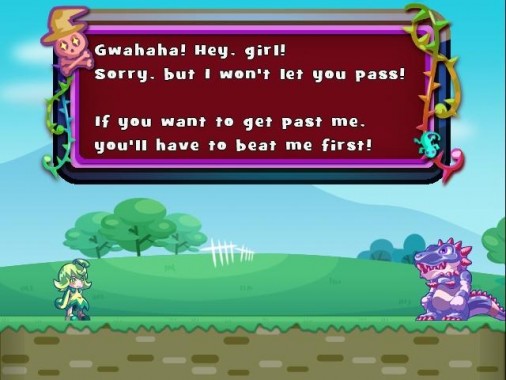 The game is obviously a 2D platformer that features 2D artwork. This means that players expecting a game with 3D modelling and layers of grey to make it feel more realistic will probably be disappointed. However, I really enjoyed the bright and vibrant look and feel of Eryi’s art-style and as such, have no problem with it. In fact, I believe that if a game is a 2D side-scroller that makes no use of the other dimension, there is no need for a game to utilise modelling at all, unless it is for an artistic reason and actually suits the gameplay.

Eryi’s Action features a pretty decent set of sounds and background songs. These feel like they’ve been added into the game as a way to enhance the cartoony feel of the game, rather than someone was being paid to do the sounds and so they did. As a result of this, the game feels much more innocent than it should.

What I found really cool with the music especially, was that each track in the game has its own place while also being an enhancement to the gameplay itself. For instance, I don’t think this game would work as well if it had dynamic music that changed depending on the action. This is a game where you’re going to be hearing the same song over and over, just because you’ve died over and over. If it gets annoying, it’s because it’s meant to.

Eryi’s Action is a platformer that gamers who love pain will enjoy. This is a game that only the most dedicated and skillful of gamers will be able to beat. If you’re a glutton for punishment or just love games that provide a challenge, then this is definitely the game for you.

Eryi’s Action is presently on Steam Greenlight check out the link if you wish to see it available as punchable title on the Steam Store.