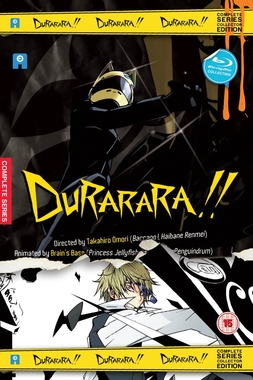 Everybody harbours secrets that they lock away, out of sight, out of mind. ‘Normal people’ are nothing, but a myth. But hidden amongst the towering buildings and the bustling crowds of a certain Tokyo prefecture there are those whose secrets are on a whole different level to those held by you or I. People with scars, people with pain, and people who would do anything to manipulate the weakness that those secrets bring. Durarara is an anime that goes against conventional storytelling and delicately interlaces the stories of every single character that you meet, immersing you in the mean streets of Ikebukuro and their unusual residents. Its non-reliance on cutesy anime tropes and its heavy emphasis on well written story arcs makes it the perfect gateway anime for people less familiar with the medium and a shining example of the importance of why good writing will always trump otaku-bait for anime lovers. 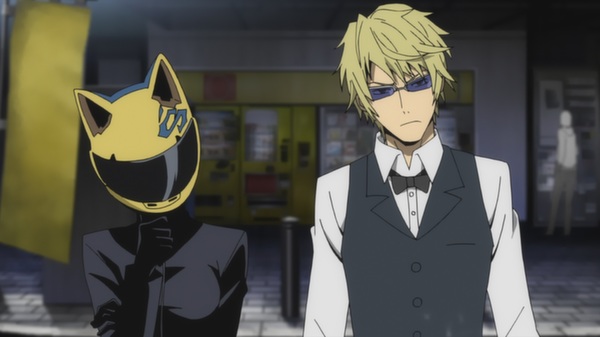 Without going into any spoilers, the plot of Durarara revolves around a group of misfit characters and their involvement in a set of events that engulf the city in which they reside. It begins with a teenage boy, Mikado Ryūgamine, moving from his quiet hometown to the Tokyo prefecture of Ikebukuro to start highschool with his childhood friend, Masaomi Kida. Upon his arrival, Kida shows him around the city, teaching him about it’s gang culture and telling him to watch out for an elusive gang called ‘The Dollars’ as well as an obscenely strong man dressed as a bartender called Shizuo Heiwajima and his sworn rival, the snide information broker, Izaya Orihara. Soon after, he learns of the legend of ‘The Headless Rider’, a Dullahan called Selty who came to Japan searching for her lost head, and he meets a number of other characters each with their own alliances and secrets. In a flourish of science, the supernatural, and deceit, the city around them begins to experience a number of unnatural events and the plot plays out from the perspective of all of these deep, surreal characters, giving the viewer a wildly varying experience with each episode. 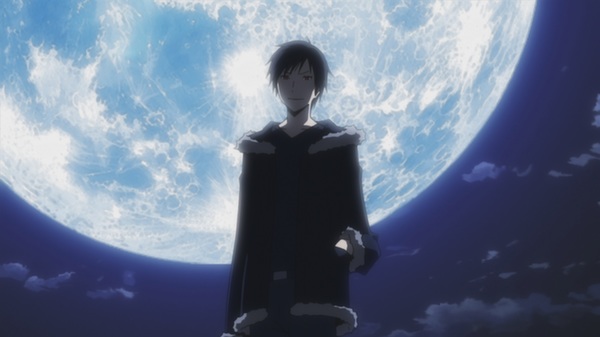 Without a shadow of a doubt, the story behind Durarara boasts some of the best writing you will come across in anime, especially released in the west. It takes an approach similar to Sin City whereby each character is of equal importance and each has their own plot that, in turn, affects the next. Being a lover of film noire, I love this narrative style and the big, bad city setting which is fleshed out so well with each passing episode. Although, the detrimental effect that comes from this is that each character is explored, but few are given enough time for the viewer to really connect with them. I found a similar problem with the series Bakemonogatari, but that had such an interesting art style and abstract feel that its dialogue driven narrative and underexplored characters felt natural. Durarara is not an abstract series at all and would be more comparable to something like Death Note where the story is told in a continuous fashion more akin to a western television series. As a result, you don’t come out of Durarara feeling as involved with the story as some might like. 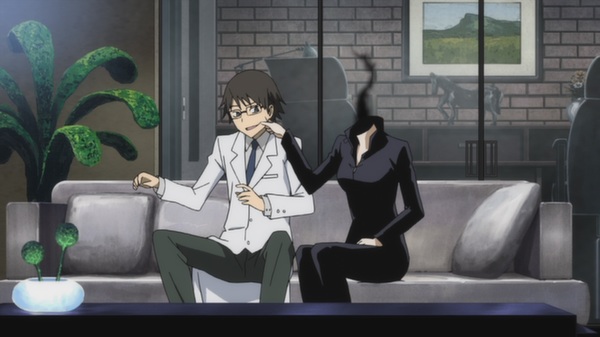 A few characters certainly take a large portion of the spotlight, but they are not necessarily the most interesting to a lot of people. By no means are any of the main cast believable people and even the most underwhelming of characters ends up being pivotal to the overarching plot, if not moreso than those who are set up to be ridiculous from the outset, but making underwhelming characters so important, while it might be shocking, does not equal a gripping story. This is particularly noticeable when you consider that the last arc which centres mostly around these characters is by far the least entertaining arc of the show.

However, not going into detail for a lot of characters does mean that there is a lot of time for the viewer to really get immersed in the absolutely wonderful complexity of the story and the city that it is set in. It beguiles you at first with some relatively simple to solve plots and then just as you think you have it all figured out the story becomes trickier and trickier, only letting you in on a little information at a time which makes it increasingly challenging to guess what will happen next. By episode 12 there is so much going on and you have seen the situation from so many different perspectives that even your best guess is probably worlds apart from the actual outcome and that is only halfway through the anime! 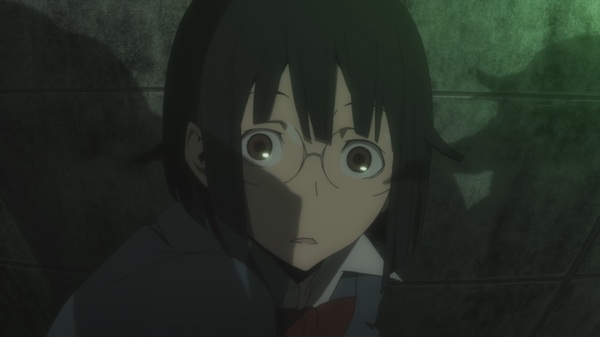 But don’t be fooled though – Durarara is by no means a deadly serious show. As I said earlier, most of the characters are utterly ridiculous and everything they do is completely erratic and hilarious. You can be watching an ominous scene that looks like it is going to reveal another piece of the puzzle and out of nowhere a vending machine will come flying out of stage left and Shizuo Heiwajima will come marching down the street snarling, “IIIIIIZAYA-KUNNN!” Scattered about, there are a number of long running gags like Shizuo and Izaya’s mutual, irrational hatred of each other and Simon the Russian sushi vendor’s broken Japanese advertising slogans that do a magnificent job of bringing out the life in characters and giving the viewer a minute or two to laugh and collect their thoughts. A number of times I found myself laughing out loud one minute and covering my mouth in shock the next when there was a big reveal. Durarara does an astounding job of engaging the viewer in what is going on, whether it be confusing you with ever-amounting levels of complexity, or leaving you in stitches as you warm to the cast’s insane, amusing antics. 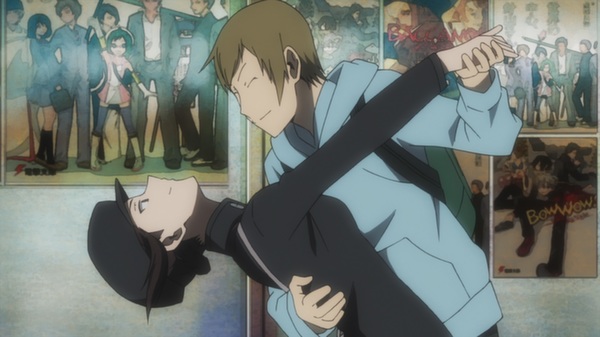 Durarara was animated by Brain’s Base a little over 4 years ago and it still looks good despite how far animation has come in that time. Unfortunately, much like most of Brain’s Base’s work the art is nothing more than serviceable. At no point are there lapses in the art or animation quality, but there is no flair. Imagine it as a book bound in a reliable leather cover – If you were looking for golden embroidery, stylized font, some kind of unique feature that makes it stand out on the shelf, then prepare to be disappointed. There is nothing that sets Durarara’s art above anything else on the market from 2010 onwards, but if you were to judge it by its own merits, it is perfectly fine, just nothing ground-breaking. 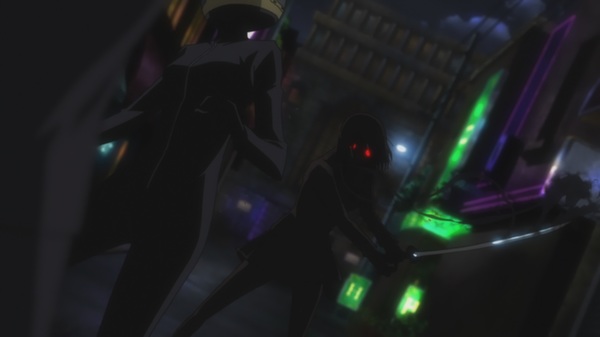 Subtle, yet effective is how I would describe the ambient music in Durarara. There are no epic character themes or spats of blood pumping action music that stick in your memory, but similarly to the visuals, all of the music does its job. The opening and ending themes, of which there are two each, are all perfectly in-keeping with the tone of the show and remain with you after the show has ended, particularly the first opening. Where this anime excels in its sound design is in the voice acting which is absolutely flawless. The voice cast of this show is an anime fan’s dream team, including Kana Hanezawa (Steins;Gate’s Mayuri Shiina), Jun Fukuyama (Code Geass’ Lelouche Lamperouge), Mamoru Miyano (Death Note’s Light Yagami), and several other seasoned veterans of the industry. 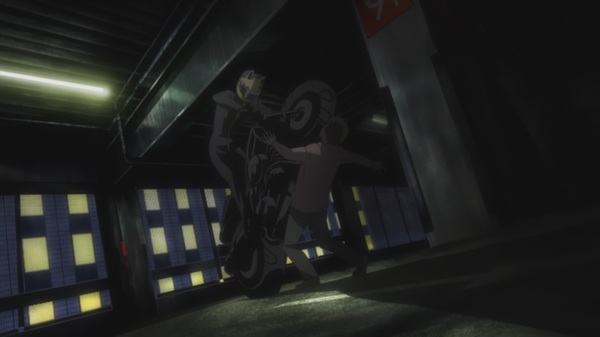 This Blu-Ray boxset from Anime Limited comes with clean opening and ending sequences, the two OVA episodes (12.5 and 25) which are two of my favourite episodes, and 4 art cards including a brilliant shot of the cast imitating the famous Beatles Abbey Road album cover. While I have not had a chance to get hands on with the art cards to check their quality, the two OVAs are well worth a watch and it is nice to have the opening and ending sequences as an extra because they will be stuck in your head for some time. 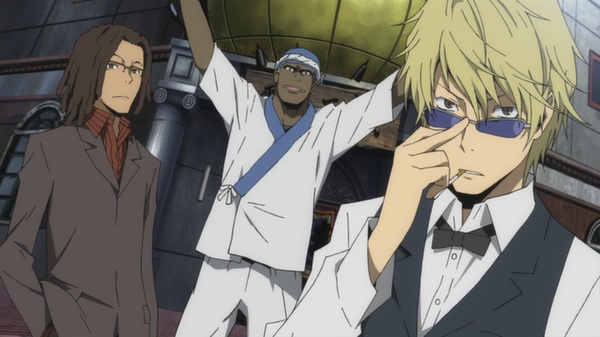 Durarara is a sublime anime that I would recommend to anime fans both new and old. People looking to get into anime will find Durarara incredibly easy to sink their teeth into and it has enough complexity and appeal to keep you coming back for more. What it lacks in any real visual flair, it more than makes up for with its storytelling prowess. When I finish a series and immediately go online to find out if there are any rumours of a second season, you know it’s something well worth watching and at just under £50, this series is definitely worth picking up. It is a modern classic that won’t soon be forgotten. Oh, and one more thing… Welcome to Ikebukuro. 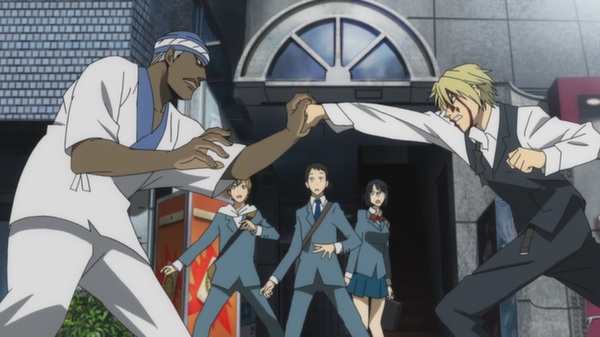