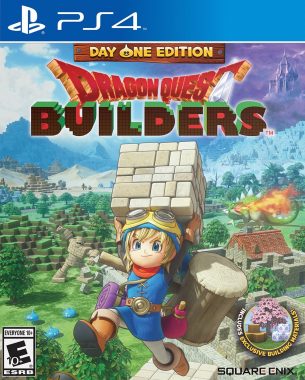 Over 25 years ago, Dragon Quest changed the way role-playing games were played by refining the formula with a mana system. All of these years later, the grand franchise is still alive and kicking – ready to change the wheel again by offering a more simplistic entry into the series in the form of a spin-off that capitalizes on the success of Minecraft. While the idea of building your own city from scratch may not be new, Dragon Quest: Builders hopes to add a new flavor to the experience by blending sandbox with the age-old RPG to create something far more refined. How does this concept work? Let’s find out. 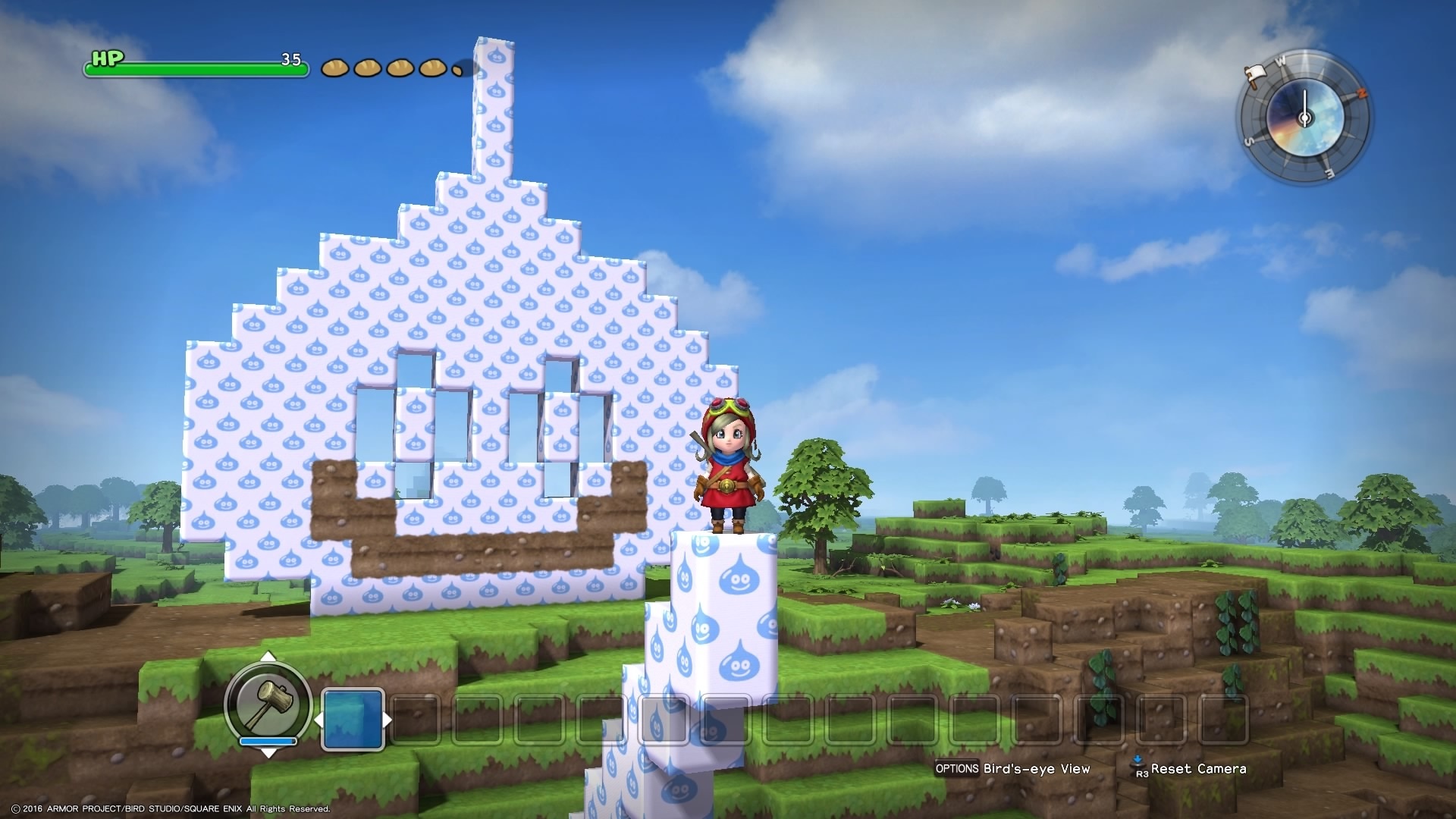 While the comparisons to Minecraft are easy to make with Dragon Quest: Builders, the narrative instantly sets it far apart by giving the player a sense of purpose. Instead of spending a ton of time hiding in the ground at night and gathering materials for no reason other than to stockpile, this title has the player go along in a main quest where they must rebuild the city of Alefgard – which most will remember from the original Dragon Quest. The player is known as “The Legendary Builder” who has come to save this little world with his knowledge of building. It is his job to rebuild using blueprints and general knowledge that no one in the world can utilize. Sure, it isn’t exactly going to compete with a lot of epics out there, but the dialogue is plenty and the amount of witty character keeps the game charming throughout. 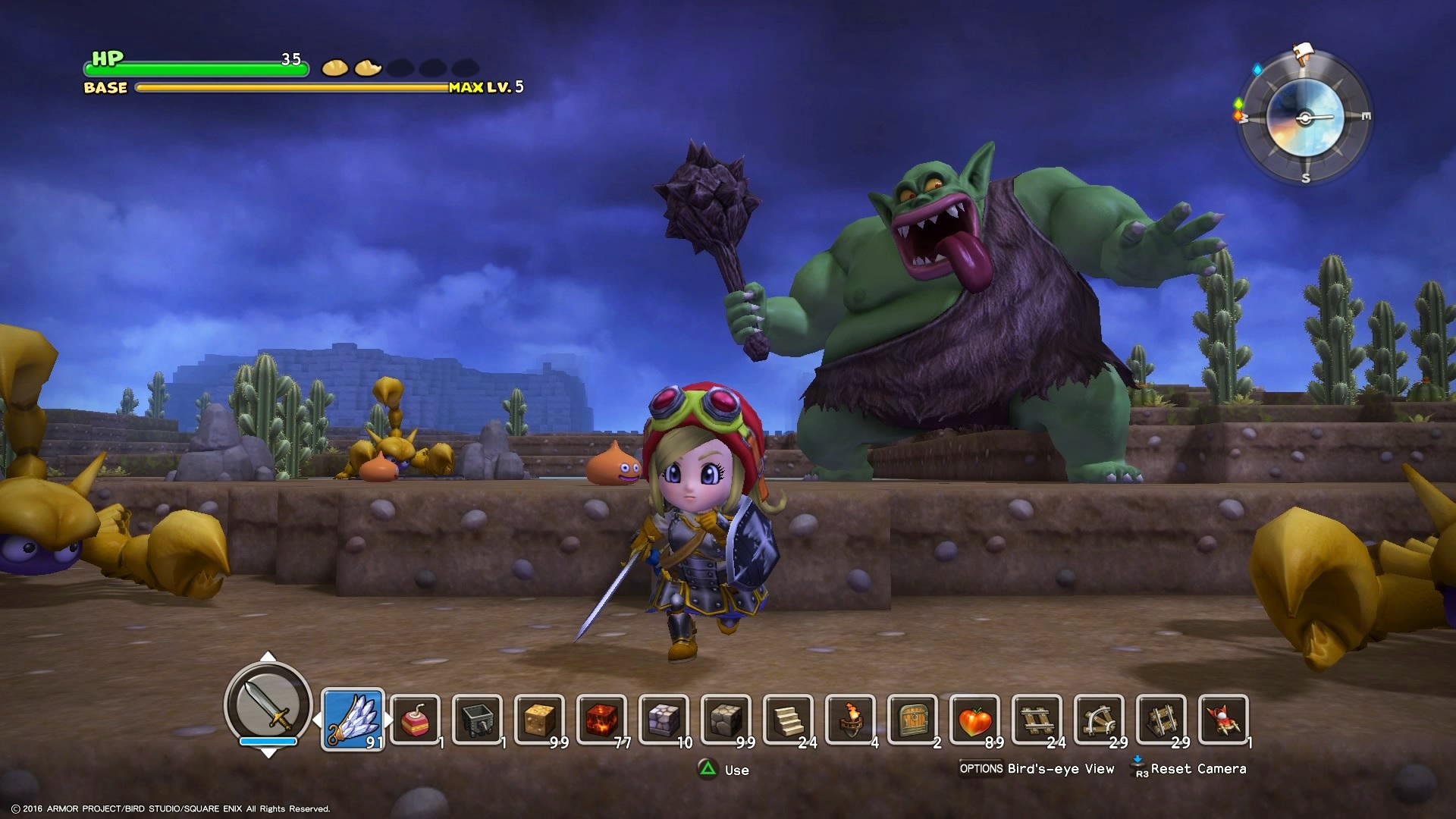 The gameplay is about what you would expect when it comes to building. Utilizing a third-person perspective, the player can stack blocks to build structures, and take advantage of crafting tables to create armor, food, and decorations. Yes, the main formula for Minecraft is there (even the menus are nearly identical and just as easy to use), but there is far more than just aimlessly building to do in this adventure. As the players expand their base, they will be able to lure more villagers into their town that all have more quests and small goals to be completed. These quests can be anything from slaying a few slimes to get some goo, or obtaining rare materials to improve the town. Portals can also be used to travel to other parts of the world, where the game begins to gain more depth with new monsters to discover, as well as new materials that are dropped that allow for more customization as a whole when it comes to decoration. 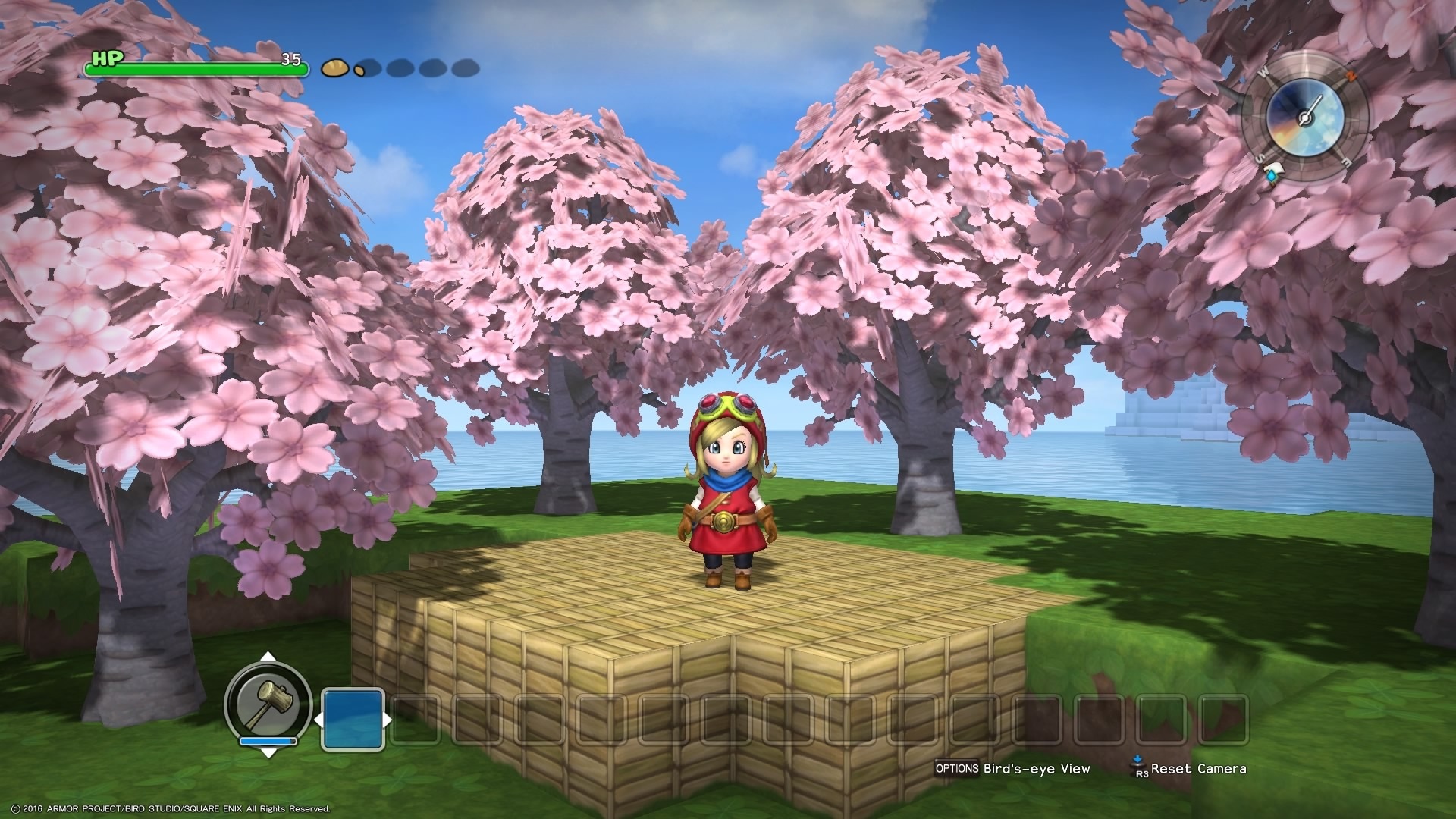 While there are plenty of different types of weapons within the game, the combat generally stays the same. The player hacks and slashes everything, which includes all enemies, dirt, fruit, and so on. This combat does work and is just fine, but leaves a little bit to be desired compared to the main franchise of Dragon Quest – a series known for its has many classes and abilities for players to choose from. As for creating your character, there is not a lot of customization as the most you will really be doing is choosing a hair color and skin tone before setting off in this adventure. Since we do get to obtain different outfits later on however, this lack of early customization is made up entirely by creating another purpose to hunt for rare threads as the game progresses. 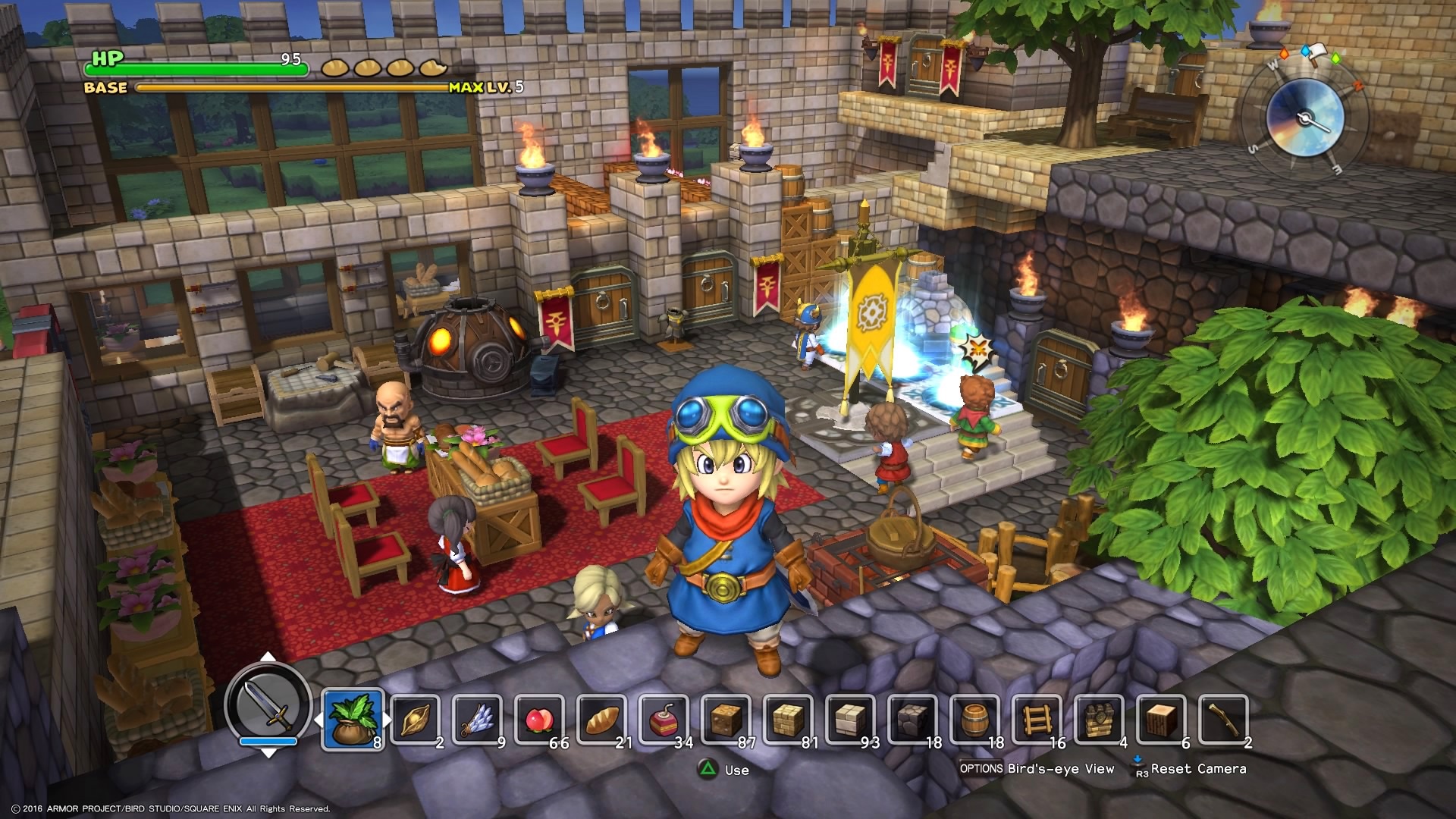 Going back to building for a moment, after you complete the main game, there is still a lot to do as the game opens up for as much customization as you can handle. Until you get there however, there are blueprints that can be earned from quests that will give you an idea of what you will need in order to build rooms. Unlike Minecraft, there are some requirements for a kitchen to be a kitchen or a workshop to be the place you build. These requirements are simple, with little things such as a specific fire and worktable having to be in a room with four walls, but give the player a sense of direction when it comes to putting together their house while still allowing those same personal touches that other crafting titles offer. It also gives the NPCs purpose as well, as they will then know that your kitchen is such, and begin cooking for you or using your craft table in order to earn their worth among the other townsfolk.

While the blocky gimmickry is definitely on display in Dragon Quest: Builders, the art style is far from generic. The textures are rich and the colors are bright and varied within this title, with a smooth coat of polish making the textures pop. The character models are also on point, all possessing that Toriyama charm that longtime fans will appreciate. Animations are also well done, but the actual combat animations could use a little more life as the lack of connection animations can making battles slightly frustrating. 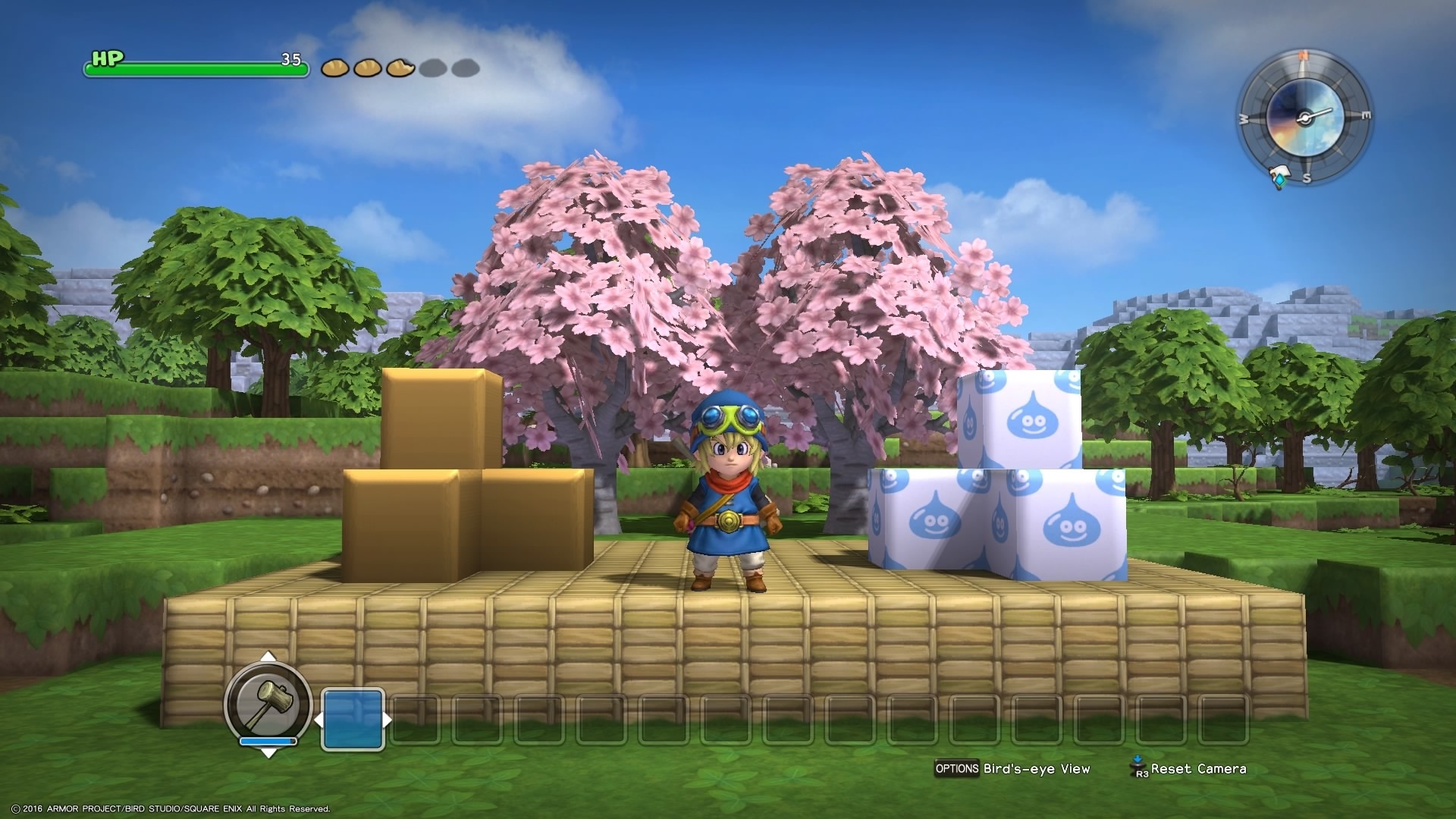 Sound wise, the game is wonderful. The soundtrack captures some ambient tunes from Dragon Quest and plays them over the easy-going gameplay to create a nice, relaxing atmosphere. This is needed in a game that you will be spending hours upon hours in, and with the classic little chimes and sound effects mixed in, you will definitely feel the themes at work as this is definitely much more DQ than Minecraft.

Dragon Quest: Builders borrows from the success of Minecraft to put a new spin on the sandbox genre, and actually refines and upgrades the experience while doing so. Everything feels meaningful now, and fans of Dragon Quest are sure to feel right at home in an adventure that makes the crafting gimmick come into its world, rather than the other way around. In a time where clones do nothing but make quick cash grabs, Dragon Quest: Builders arrives on the scene to make a strong statement through quality and character, utilizing the building blocks from others to create an unforgettable and unique entry into one of the most storied franchises of all time.