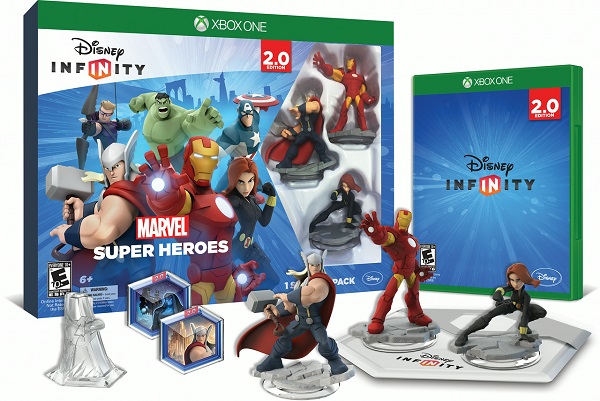 Disney Infinity was an absolute massive hit last year, and continued selling Starter Packs, Play Sets, Figures and Power Discs until even today. This time round, Disney decided to add to the formula by making use of their Marvel Comics license to include some of the world’s most renowned super heroes in on the action. This isn’t just a simple character roster addition though, Disney Infinity 2.0 really does feel like a massive leap forward for the franchise and while it stumbles in a few aspects, it still provides a solid offering for kids, kids at heart, die hard collectors, Disney fans and Marvel comic enthusiasts.

There is only one Play Set Piece in the Disney Infinity 2.0 Starter Set and it tells the story of Loki’s attempt to unleash havoc on the streets of New York by summoning an army of Frost Giants. The Avengers all leap into action, aided by Nick Fury and a few lesser-known Marvel Heroes in order to stop Loki and his associate; M.O.D.O.K.

The story is a bit light and childish, but you can’t really complain about that since the target audience is…well…kids. Although one thing I found really impressive was the developer’s not being afraid to delve into some of the more obscure or lesser-known Marvel characters for story purposes. M.O.D.O.K. is the type of villain that likely won’t ever see the silver screen, so his inclusion here is particularly cool. The same goes for characters like Wasp and Ms. Marvel, two of Marvel’s most badass female roles that are yet to make it to the screen. 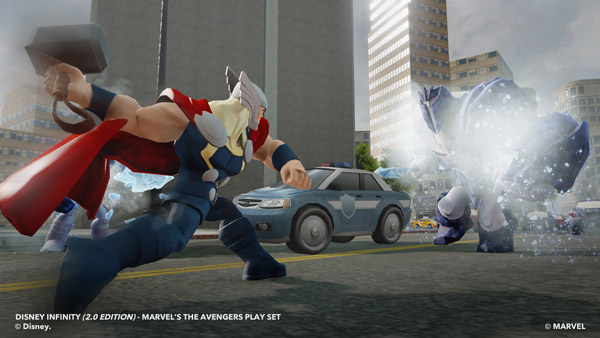 Disney Infinity 2.0’s gameplay is broken up into three distinct parts: Play Sets, the Toy Box and the brand new Toy Box Games. The only Play Set for the Disney Infinity 2.0: Marvel Super Heroes Starter Set (phew, that’s a mouthful) is The Avengers, and lets you pick one of the three included characters; Iron Man, Black Widow and Thor, or one of the additional Avengers characters; Captain America, Hawkeye or The Incredible Hulk and complete missions to stop Loki and his army of Frost Giants from ravaging the city. Many of these missions have you traveling to one part of the city, beating up some enemy thugs and turning in for your reward. If that sounds a little dull, that is because it kind of is. There is little to no mission variety in this Play Set. Not only that but the side-missions that were everywhere in the original Disney Infinity are scarce at best now. This cuts down on the amount of time you can spend in the Play Set actually doing things.

It is a bit of a let-down to get such a shorter amount of time in the Play Set, but that just means that players get to jump into the Toy Box all the sooner. While it is available from the onset, you unlock toys by playing through the Play Set campaigns so you will start off with a few more building blocks than you would otherwise. The new Toy Box mode is an absolute dream to play.

If you are familiar with the original Toy Box, then you will know it was clunky, unresponsive and took a long time to do anything. Well those days are gone with a lot of enhances and fixes (both behind the scenes and at the user-level). Firstly, the maps are so much bigger than before, and can be jam packed with toys, logic connections and other goodies without causing nary a dip in frame rate. Secondly, the way in which you purchase toys has completely changed. Gone is the old random roulette spinner, and in its place are purchase trees. You now purchase smaller items along a tree in order to get to the big goodie at the end. While this can still be a little tedious and time-consuming, it nevertheless makes you feel like you have more control over what you are unlocking. 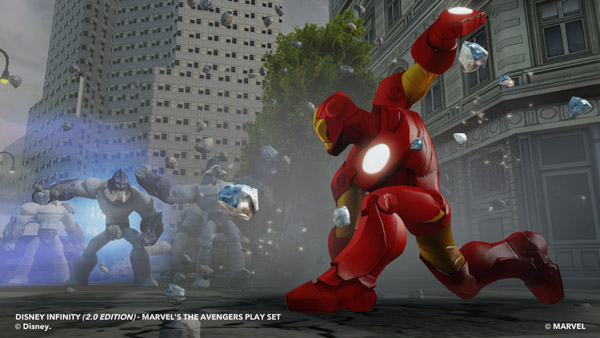 In-game toys aren’t the only part of the game to get trees now, characters now all have a skill tree to unlock more abilities and attack combinations. Levelling up was originally included in Disney Infinity 1.0 but it offered little more than a way to get spins in the  Toy Box, now characters get stronger and gain abilities like flight, web-slinging, wall-crawling and even ultimate finishing moves. The skill trees add a bit more depth to the game, and every character’s is unique. Well, except for the 1.0 original characters. They all have largely similar skill trees and all lack a special move. Some of the added abilities don’t really work for the characters, and it comes off as lazy design. A prime example of this is the fact that Phineas gets a super-jump even though he has no reason to. Original Disney Infinity characters also don’t gain any of the new game’s added abilities like flight or wall-crawling. Even Syndrome, who’s whole plot in The Incredibles film revolves around him being able to make himself fly is unable to in the game. While there is a lot of love shown to the new Marvel characters in terms of sticking to their designs and abilities, the same love isn’t shown to the original characters and the abilities they do have really feel like an afterthought.

Disney Infinity 2.0: Marvel Super Heroes also contains new Toy Box Games, which are pre-designed games like the tower defense Assault on Asgard, or the dungeon crawler Escape from the Kyln. These are unlocked by placing the Toy Box Game Disc onto the Infinity Base and offer a LOT of gameplay. To complete either of the two pre-included Toy Box Games will likely take you longer than the Avengers Play Set campaign. The design of these games is fun and will surely spark a lot of creative juices as people play through them, before building their own games. 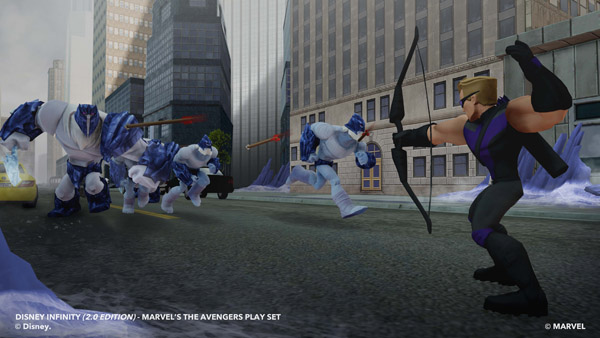 The original Disney Infinity created an art style that was uniquely its own. It managed to capture the spirit and the look of Disney’s various franchises while also making them look like they all belonged together. The bright colours and semi-exaggerated features are what DI is all about. 2.0 continues this trend, presenting some of Marvel’s biggest and most well-known stars in a whole new light.

While the art style fits the super heroes surprisingly well, the Marvel gang all seem to stand apart from their Disney-created bretherin. While the original game’s characters all looked great standing side-by-side, and often looked like they belonged together despite their obvious differences (Mr Incredible, Perry the Platypus and Lightning McQueen could stand side by side and look like a unified team), the Super Heroes kind of feel like their own different team. Sure they all still look great together, but there is a bit less uniformity across the board.

The jump to next-generation has had an impact on the visual quality of the game, but it is not as immediately noticeable as you might hope. Character models and the world are a little more detailed but unless you are playing both the versions of the game side-by-side then it is kind of hard to tell. What the new hardware does do however is change the size and scope of the game.

Maps are now so much larger before and allow for a tonne more toys to be placed in the Toy Box than ever before. Massive city-scapes are rendered easily and even filling an entire game world with Creativi-Toys and logic connections causes little to no performance issues. 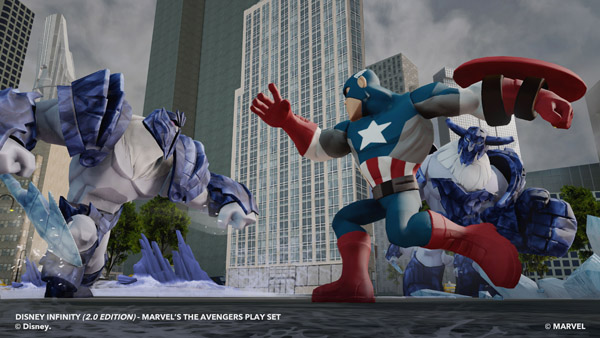 The sound effects and music are much the same as the original, with tracks being lifted from famous Marvel and Disney animated series and movies and put into the game world to really make it feel like a cohesive, shared universe. However voice acting seems like an entire step-up from the previous game.

While Disney Infinity had a lot of voice actors reprising their roles from film and animated series (most notably The Incredibles and Phineas), many characters were voiced by sound-alikes. While they still sounded great, anybody who has spent time watching Disney programming would soon realize that it wasn’t quite right. 2.0 Takes it one step better and gets many (see: almost all) of the voice actors from the various Marvel animated programs to reprise their role in the game.

Kids (and kids at heart) who have watched Avengers Assemble, Ultimate Spider-Man and Hulk: Agents of S.M.A.S.H. will immediately recognize all of the familiar voices, who have begun to embody their characters. This again helps make that cohesive and unified feel, and also shows a lot of care on the part of the developers to treat these characters right. There is however one particular character who is not voiced by his television counterpart; Nick Fury. Chi McBride does not reprise his role as the director of S.H.I.E.L.D. and instead the main man is voiced by none other than Samuel L. Jackson. Talk about star power! Sam Jackson’s Nick Fury makes the jump from the silver screen to the console game with ease and really sounds fantastic as he is giving you missions and directions through the Avengers Play Set. 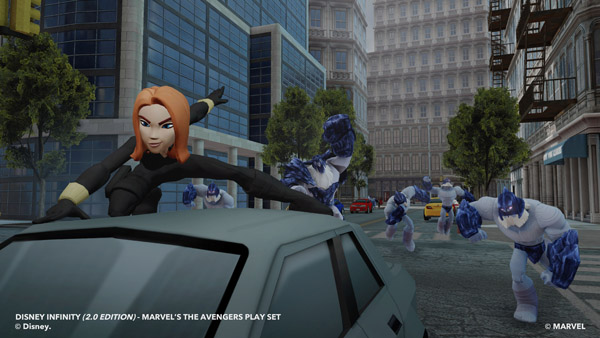 This is Disney Infinity we are talking about, so lets get down to brass tacks! You get a wide variety of goodies in your Starter Pack and it ensures that you have everything you need to get playing from the moment you open the box. Your Starter Pack will come with a Disney Infinity Base, Avengers Play Set Piece, two Toy Box Game Discs and three figures: Iron Man, Thor and Black Widow.

The figures all look amazing, and they manage to capture the look and feel of their character perfectly. Everything from the poses that the figures are in, to the costumes they wear are just perfect. Well, almost perfect. Iron Man is painted in his traditional yellow and red colour scheme, but due to the mass-produced nature of the figures, he lacks any fine detailing. The separation in his armor while still present, doesn’t stand out and makes the figure look a little bland in comparison (Spider-Man suffers from a similar lack of detailing).

The Disney Infinity Base is meant to be basically identical to the one from the first game, but I found it worked even better. While the original Infinity Base had issues with not reading figures or Play Set Pieces at times, the 2.0 Base has shown none of these problems (and I have already spent about as much time on 2.0 as I did the original game). The added build quality and stability really made my gaming experience all the more better as I wasn’t constantly having to fiddle with my character figures to get them to stay in the game. 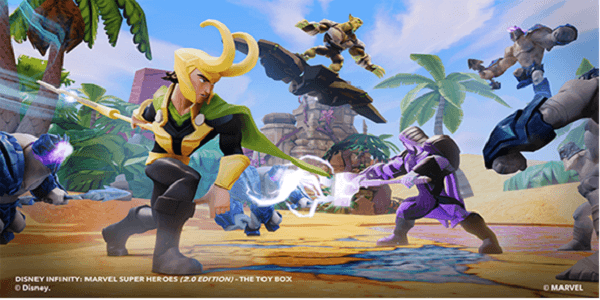 Disney Infinity 2.0 takes a great concept and enhances it further. Bigger maps, more characters and an insane amount of options for players to spend countless hours building, creating and playing. It is a little disappointing that the Starter Set only contains one Play Set, and that it isn’t quite as long a campaign as you might hope for but the new Toy Box 2.0 and the Toy Box Games will still keep you entertained. It is a little disappointing that the 1.0 characters didn’t really get much love this time around, with lackluster skill trees and without abilities that they really should have (cough, cough: Syndrome). Regardless, Disney Infinity 2.0: Marvel Super Heroes is a step above its predecessor and is a fantastic gaming experience for kids, or kids at heart and manages to utilize the Marvel branding with an incredible amount of care and respect creating what is in many ways the ultimate Marvel game. I’ve often said that Disney Infinity was a love letter to Disney as a whole, but Disney Infinity 2.0 is more of a love letter to Marvel Comics with a “P.S. We still kinda like you, Disney” at the end.