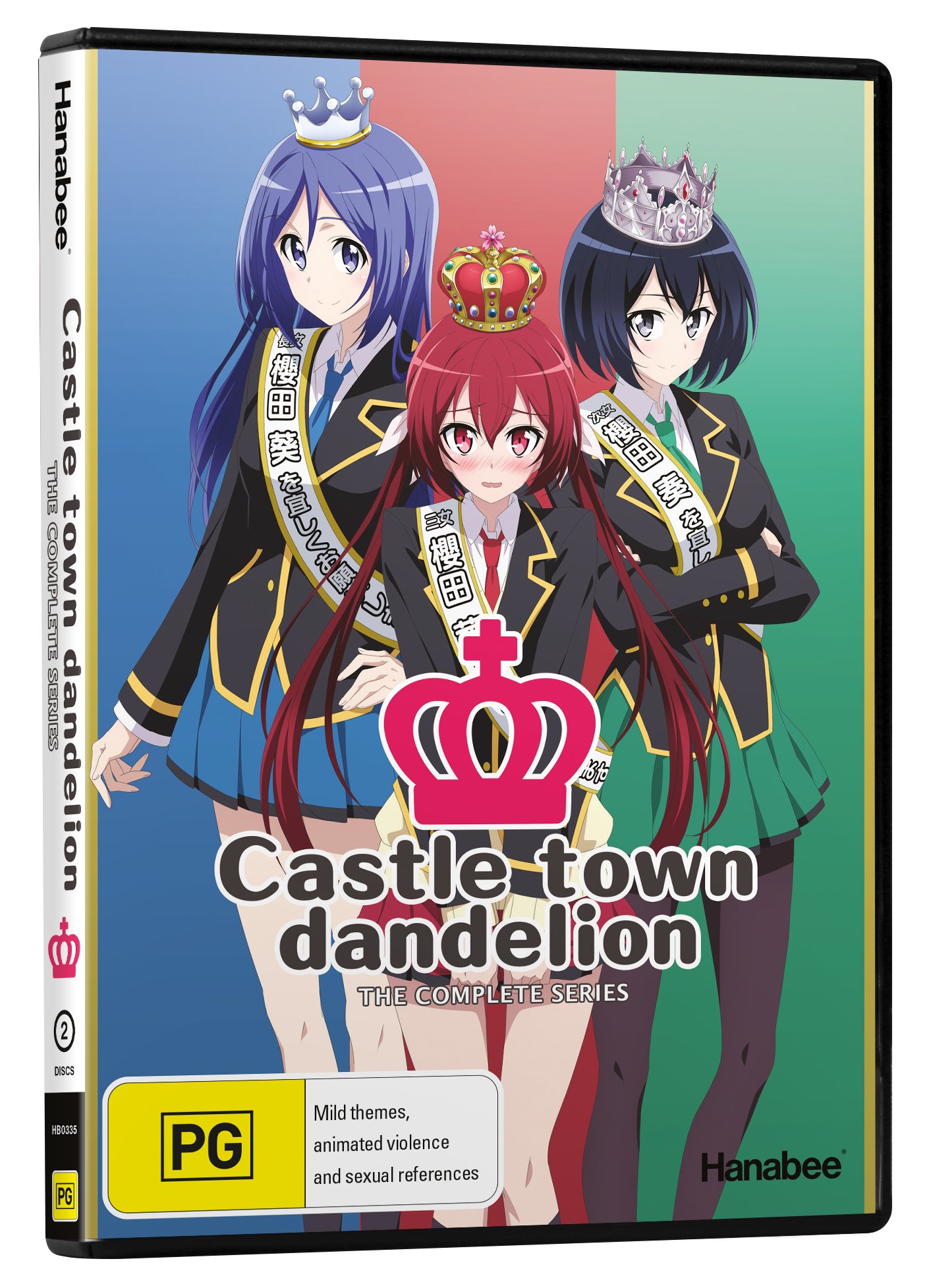 The nine siblings of the Sakurada family live in a normal house with their loving parents, but this is no ordinary family. They are royalty, and each sibling has a special power! The King has called for an election to determine which of his children will succeed him, so they must campaign in order to gain the votes necessary to take the crown. They do not all want to become the next king, however. Akane is extremely shy and hates the unwanted attention she receives. To make things worse, there are 200 surveillance cameras across the kingdom recording and broadcasting her every move from the moment she sets foot outside of her house. Akane’s campaign promise is to remove all of them.

After countless adaptations of four-panel manga series, Castle Town Dandelion is an unusual breath of fresh air. The time we live in is a significant contributing factor to its ability to be entertaining. When it first aired in 2015, it would most likely have seemed stupid. In 2017, its core premise seems less farfetched and more believable. With idol elections in Japan and people becoming the stars of their own personal reality web-series in China, it almost seems like it could really happen somewhere in the world. 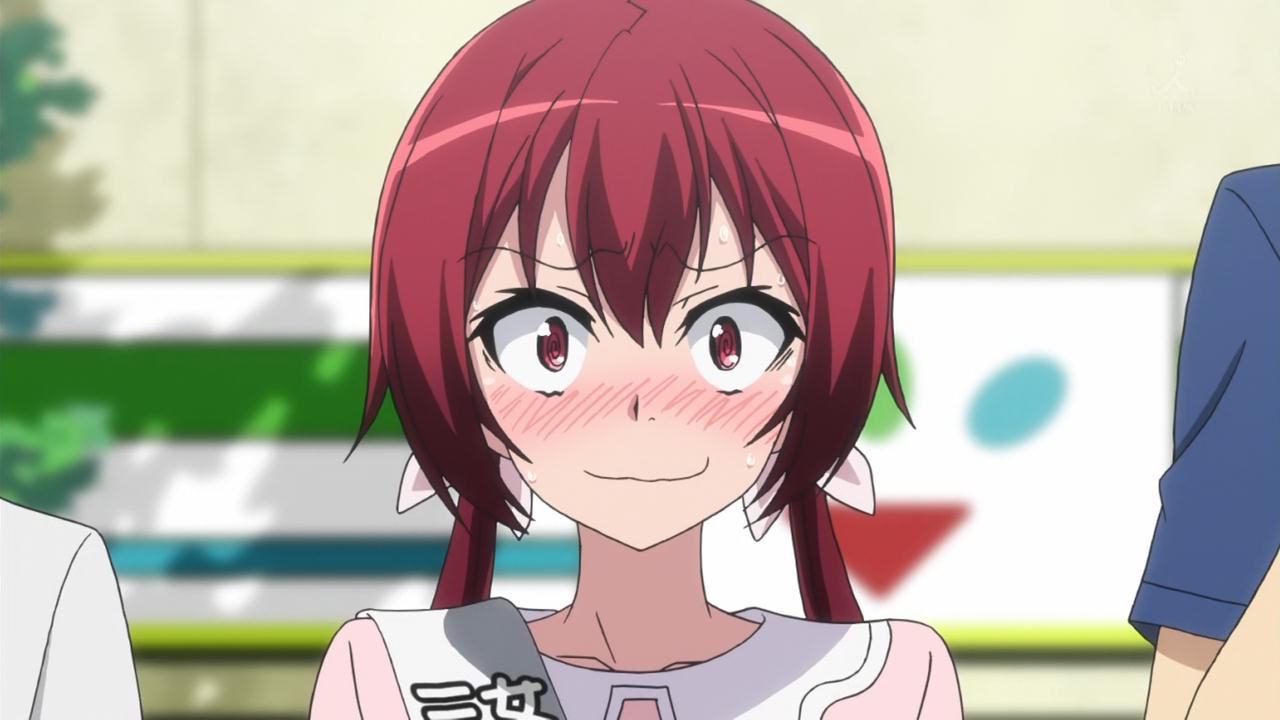 The characters are presented as more than just their special powers. Many of the Sakuradas receive enough character development to make it possible to forge an emotional attachment to them. Most episodes are split up into two or more parts; each section focuses on 1-3 characters, and this formula makes sense given the series’ origins. Enough is revealed about most characters and their thoughts and feelings to make this more emotionally engaging than western superhero stories are. Some of the siblings are nothing more than unoriginal archetypes, but they care about and are supportive of each other, even if they sometimes keep their true intentions to themselves. Older sister Kanade often seems antagonistic towards Akane, but she does care about her younger sister deep down. None of the jokes about Kanade trying to escape Akane and her near-crippling social anxiety in public are funny, however. When it is revealed why Kanade is so intent on becoming the next king, at least, she starts to appear as a well-rounded character instead of an uninteresting rival. Her ability to instantly materialise any object she can afford, albeit useful, is more of an interesting ability than a defining trait, and the same can be said about Akane.

Akane’s ability to control how gravity affects her and anything or anyone she touches is useful, but her journey towards becoming less shy and more confident is the real highlight of this series. Unfortunately, the 200 cameras that watch her every move outside of her home cause her a great deal of anxiety. The series’ origin as a four-panel gag manga and the way Akane is treated are the only things that hold these twelve episodes back. She is often treated in about as distasteful a way as could unfortunately be expected from modern anime. The original author evidently thought that making the public see her underwear on television would be amusing, but seeing her suffer through her embarrassment is extremely unpleasant. She is by far the best character in this series, and it is easy to root for her, but it is sometimes impossible to believe that the original author wants her to be taken seriously. Some episodes featuring her are completely ruined because of this, but the character-driven moments and character development are enough to save this series. 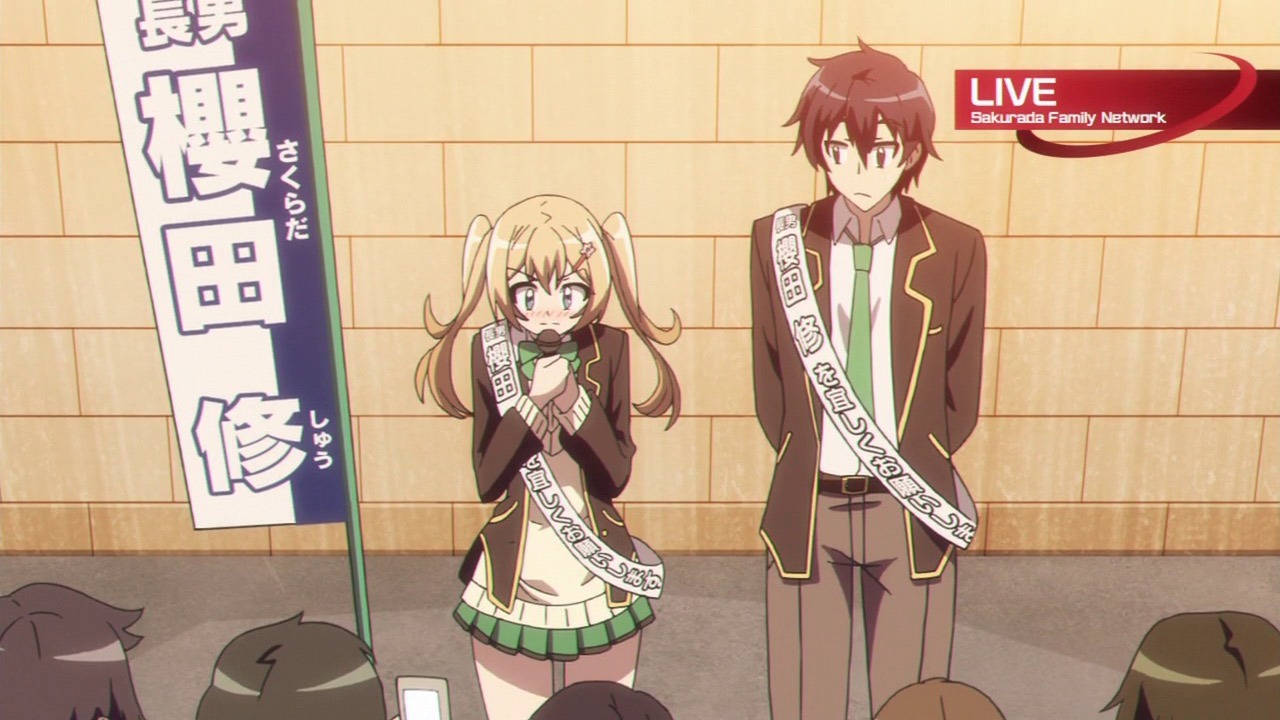 The impact of being born into a royal family can also be seen in a few other characters. When Satou, a classmate of the eldest brother, Shuu, confesses her feelings to him, he states that he cannot reciprocate her feelings during the election campaign. His reasoning comes across as contrived more than anything else, but he eventually realises that he should accept her into his life. The scenes depicting the two supporting each other during the final stretch of the campaign are sweet, even if Satou is somewhat nervous about becoming a public figure. Younger sister Hikari has a hard time boosting her popularity, so one day, she decides to become an idol. She initially hides the fact that she is a member of the royal family, and once she realises that she actually needs to put effort in to succeed, she does her best to seem like an idol and not a princess resorting to cheap tricks to boost her popularity.

The winner of the election may not be your favourite Sakurada. The next king takes advantage of an emergency situation on election day and wins almost by luck as a result. Older sister Aoi’s moment in the spotlight ends up being the only interesting scene before Akane’s narration of what everyone does after the election. Despite a final episode that largely plays it safe, seeing how each sibling approaches their life as a prince or princess and watching them grow is far more interesting than knowing how the kingdom will be managed in the future. 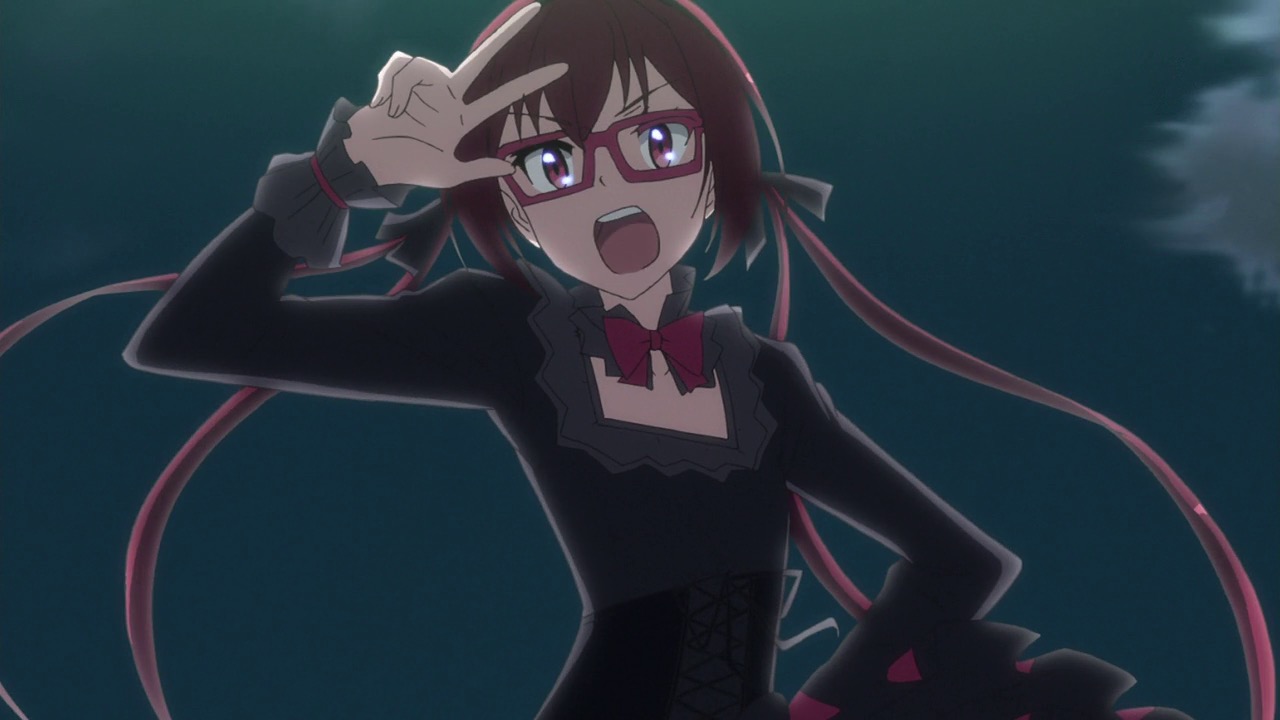 The setting is average for an anime focused mostly on middle and high school students, and the character designs are too. What matters is that the siblings all stand out from one another. Younger sister Misaki has the ability to create seven clones of herself, and while there is rarely any need to distinguish between the various clones, their expressions help give away what part of Misaki’s personality they are supposed to represent. One of the clones appears to have an incestuous interest in Misaki’s twin brother Haruka, but this is never taken too far compared to the way Akane is treated. Akane is often embarrassed by stupid and pointless situations and is extremely shy whenever she is in public. Fortunately, she is given the opportunity to shine when she becomes Scarlet Bloom, the ‘mysterious’ defender of justice. There are some great action scenes, but the animation supports the series rather than being its most outstanding component, and there is nothing wrong with that.

The opening song and ending song are both typical J-pop songs. They are not annoying, but are utterly forgettable. The background music tends to hit most of the right notes, although it too fails to be memorable. The English dub is also great for the most part. Bryn Apprill is the highlight of the dub; she portrays Akane’s extremely shy but sometimes confident nature excellently. Jad Saxton also delivers an entertaining performance as Misaki and her clones, providing them with a subtle nuance. The only real problem with the dub is the way in which the characters’ names are pronounced. The ‘a’s are consistently mispronounced by everyone; Hikari’s name is pronounced more like ‘hickory’ than the Japanese word for ‘light’, giving a bizarre feel to the dub. 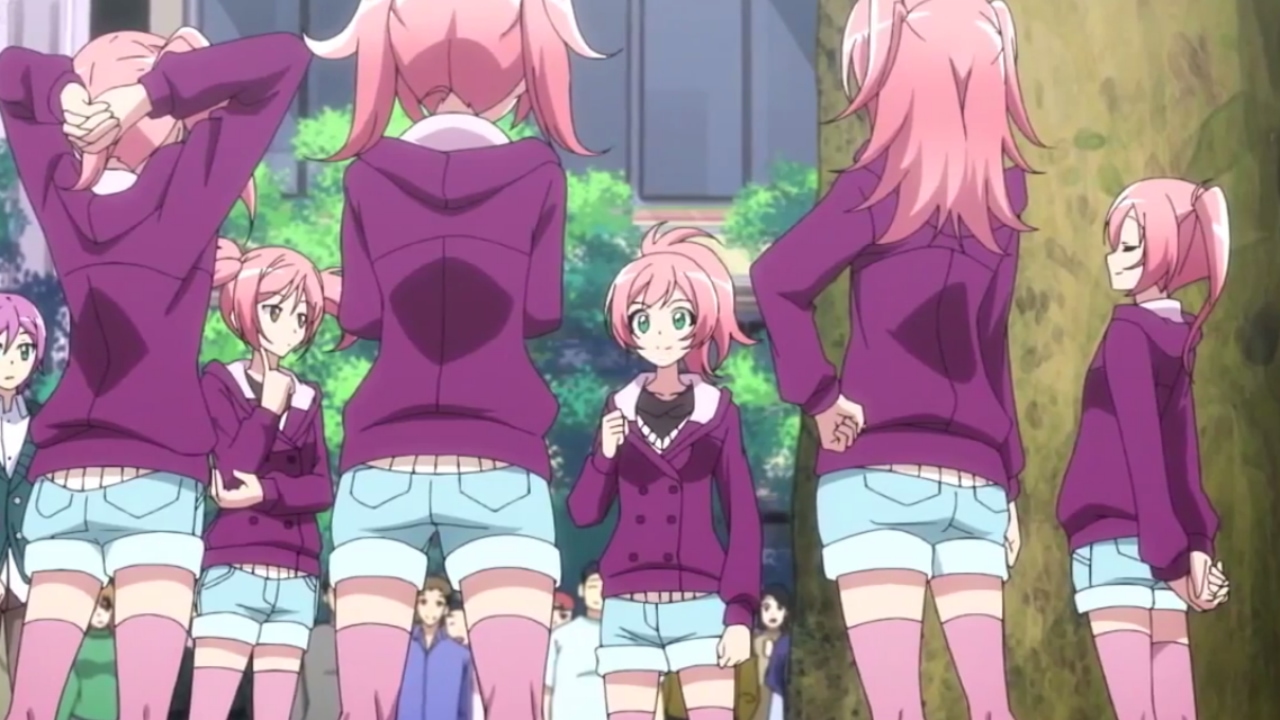 With a unique premise and a lovable cast of siblings, Castle Town Dandelion manages to stand out as an enjoyable character-driven look at adolescence and what growing up as a member of a royal family is like. Its attempts at humour often fall completely flat and have the opposite effect to what was intended, however. This may be one of the first examples where an adaptation of a four-panel gag manga would have been better off without the comedy aspect; it is unnecessary and unnatural to the point of being off-putting. The election campaigning is interesting, at least, but this series is primarily worth watching to see its characters interact with each other and grow. The final episode is significantly less interesting than it could have been, and some episodes early on are basically unwatchable, but the core premise of the story turns out to have a lot of potential.
Capsule Computers review guidelines can be found here.

An entertaining series with an interesting and well-utilised premise and some reasonably well-developed characters. Unfortunately, a couple of episodes are ruined with its pathetic treatment of the easily-embarrassed Akane.
8