Rebooting a beloved franchise that hasn’t seen a new title in years is always a tough balancing act. On one hand, developers need to satisfy the most die-hard fans who have waited a long time to see a new title from their favourite franchise. On the other hand, developers also need to attract new fans who may demand a more modernized game.

Disciples is one of those tricky series where developers must walk that fine line. Disciples 2: Dark Prophecy still has a very dedicated and active fan base that continue to play and create content for a game released in 2002. These fans have been waiting a very long time for a true successor to the beloved game. On the other hand, Kalypso has been sitting on the franchise for the last nine years after Disciples 3: Reincarnation’s less than stellar reception. Now, Kalypso has tasked Frima Studio with the daunting challenge of creating a game that will revive the franchise and drag it into the modern era.  The result of this project is Disciples: Liberation.

Before progressing any further, it is only fair to admit that I am a newcomer to the franchise and will be viewing this game through that lens. Coming into this preview, the most I knew about the previous titles is the hardcore fanbase around Disciples 2 that persists to today and Disciples: Liberation is turning out to be a very different game.

Disciples: Liberation is a strategic turn-based RPG with some light city building and unit management. The gameplay loop consists of wandering around the overworld, getting into fights, and returning to the city to build new structures, research new spells, and replace fallen units.

The overworld maps are the usual RPG mix of main quests, side quests, dungeon entrances, and treasure hidden off the beaten path. The resource gathering through pick ups littered around the world and capturing resource production buildings strays a little from the standard RPG. All these resources will be needed to create new units and buildings in the city building phase. Players are free to wander around as they please, a break from the Disciples franchise. For better or for worse, there’s nothing special about Disciples: Liberation’s overworld, making it a good candidate for improvement in the future.

The city building is a peripheral mechanic in Disciples: Liberation so far. It is a very simple system where players pay resources to add buildings in a set number of slots. Each building can generate units or provide some helpful service. There are more buildings there are slots, so players need to organize their city based on the units the players want to take into combat. I like the mechanic that lets players put buildings not needed at this exact moment in storage for a small fee instead of charging the player the full price for constructing the building from scratch. It allows players to quickly cycle in different unit types with only a small extra cost.

The RPG mechanics isn’t so much simplified but cut down to make the game more manageable. Instead of fretting over every named character in the game, Avyanna is the focus. Players will manage her skills, armour, weapons, and shards. For other named characters, players only worry about their weapon and shards, while generic units only have shards. I can see why the developers opted for this set up as Avyanna’s deep skill tree with plenty of pre-requisites needs a good bit of planning, even though respecs are available for a fee.

The combat is Disciples: Liberation’s strongest offering. It’s a tactical turn-based RPG that’s meant to feel a bit like an army with a team of named characters rounded out with relatively disposably generic units who can die permanently. Avyanna serves as the core of the team with the greatest degree of flexibility in combat with her giant list of spells and access to an actual skill tree. On the other hand, the remaining characters have a strict niche they are serving. The action point system is the best part of combat. Each action is organized by one of three colours. Each character has two points of varying colours, restricting the player’s overall options. The restriction is what makes Disciples stand out so far as it forces players to make interesting tactical decisions when building an army and during combat.

Quality of life features is Disciples: Liberation’s weakest point and will need work before the game releases. The key bind options are incredibly sparse. Some of the key binds either break from convention or could be more efficient using different keys. When it comes to binds, player choice is always superior. It is also impossible to only play with only a mouse. Basic functions like backing out of a menu has to be done using the keyboard. It’s an irritation that could easily be solved by making the icons indicating the key and action to be interactable.

Fans of old Disciples games are going to be disappointed, one look at YouTube comments and forums show the discontent has already started before Disciples: Liberation has even released. This game is a completely different beast, so I can understand why old fans are raking Frima Studio and Kalypso over the coals. For new entrants of the franchise, Disciples: Liberation looks like an intriguing option for fans of turn based RPGs. Itis turning out to be a pretty good game. The combat is really enjoyable, and all the mechanics mesh together well. There are still parts that need some polish before the game releases. I can already see Frima Studio has some options can be built upon in future expansion packs. Unfortunately, this is at the cost of old, hardcore fans who have not taken the changes lightly so far. Whether the new game will be able to sway the opinions of old fans who are willing to give the new game a chance or create enough of a new fanbase to stick with the new vision is the million dollar question for Kalypso and Frima Studio in the coming months.

“It’s not the game Disciples game long time fans wanted by any means, but Liberation is looking like a solid game on its own right. The combat is solid and the mechanics mesh well.“

Check out Disciples: Liberation First 30 Minutes of Gameplay below:

Frima Studio Releases a Behind The Scenes Look at Fated: The Silent Oath’s PAX 2016 Set Up 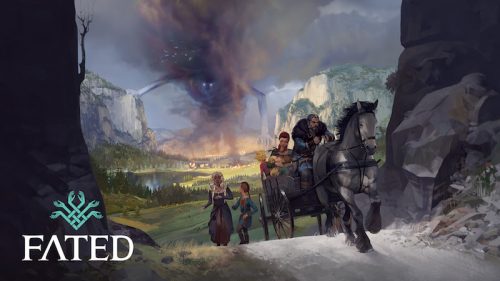