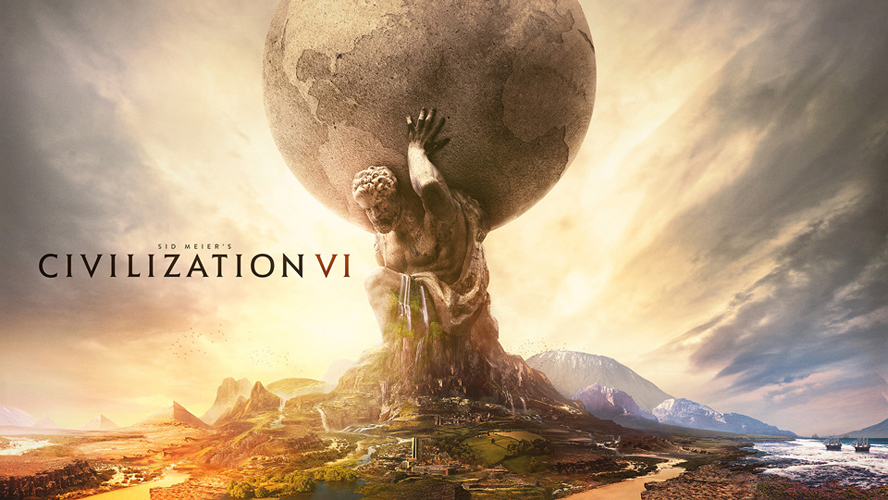 Last month my colleague and I were invited to 2K Games’ offices in Sydney for a hands-on preview of their upcoming 4X strategy title, Civilization VI. They say time is a flat circle (hexagon in this case) – what has come before will come back again, and this is certainly the case with Civilization VI. Building off of the success of Civilization V, and learning from the mistakes of Beyond Earth, Civilization VI is an entry to stand the test of time.

Our game time was unfortunately limited, so I was unable to get past the Medieval Era, and there’s a bunch of stuff I can’t talk about, but the few hours and 150 turns left us with plenty to discuss, and an exciting look into the future of Civilization. 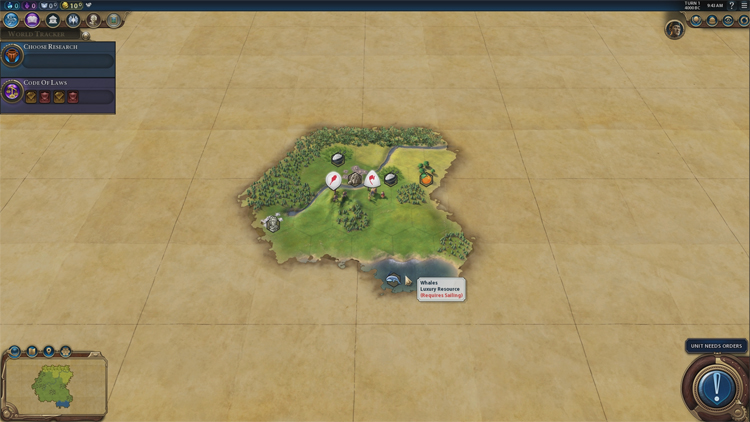 The most immediately obvious difference from Civilization V is the new graphics. Keeping the hex based design, the new art style lends itself to even brighter colours than its predecessor, with a much more cartoonish feel. Graphics and art styles are not my favorite thing to talk about, since they’re so subjective and someone will always take issue, especially when stark changes have occurred since the incredibly popular 7-million-plus-copies-sold forerunner title, but these ones I enjoyed. The colour palette is instantly familiar – bright green grasslands, yellow-green plains and yellow deserts. The mountains and hills, rivers and seas are all still easily distinguishable on the map. The new models for forests and jungles are hard to tell apart at first glance, and marshes require a practiced eye to spot before your Spearman gets stuck in one and killed (grumble). Luxuries and strategic resources are easily visible, and have been redesigned to suit the new aesthetic. 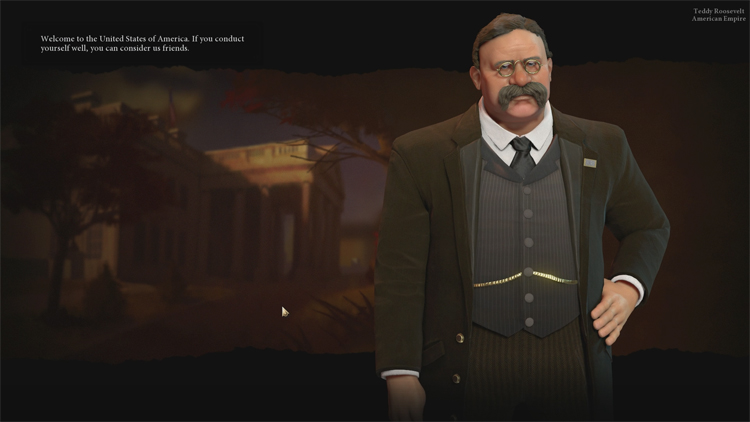 One of my favourite changes is to the fog of war. No longer must we be oppressed by towering walls of cloud, and darkened hexes to indicate where we’ve explored but don’t have current vision. Now the unexplored regions take on the look of blank parchment, and the explored but hidden areas look like an Inkarnate map, with stylized terrain inked onto the paper. For those familiar, it’s a graphical style very similar to that used by (the relatively ancient) Age of Wonders 3. Despite lacking the fantasy title’s zooming levels of abstraction, the effect still works and looks wonderful, lending the feel of an adventure/treasure map. So for players arriving fresh from Civilization V, the game presents no difficulties being understood. The real changes however, come in the form of the unstacked cities, which you can refresh your memory on here.

The addition of districts being used to move particular buildings outside the city presents interesting consequences mechanically but visually they’re delightful. The districts (and wonders!) are just as brightly colored as everything else, and as a city and environs grow, the sprawl of tents, buildings, paths and flags makes everything look exciting and lived in. Cities are no longer confined to a single tile, needing to push out and impose their structure on surrounding hexes, out to the workable distance (still 3 hexes away, although my cities never got large enough to thoroughly check). The resulting effect is to make your empire feel like an empire, with industry and commerce marking the world, instead of a loose collection of city states, confined within stone walls. 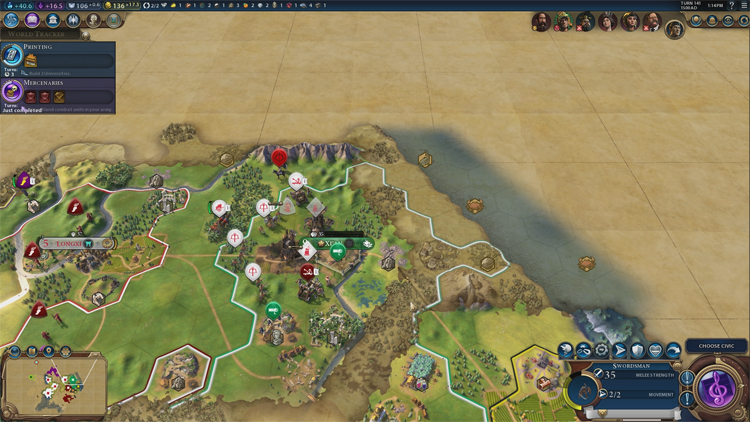 The mechanical implications of this however are simply genius. Military districts are required in order to build advanced military units, and when you do build these units, they appear inside the district. Have a war with a nearby neighbor? Build your military districts on the borders, and get reinforcements to the front a turn or two faster. Can’t manage to get that perfect river/hill/mountain/coast placement for a city? Not to worry! As long as your science districts are adjacent to a mountain, you can build observatories. Useless tundra tile you don’t know what to do with? Put an entertainment district on it to keep the unwashed masses happy. This increased flexibility in decision making does cut both ways: moving the city outside of the city makes it more vulnerable to raiding, since now your opponents don’t need to invest in a lengthy siege to cripple you: a couple of units of cavalry, striking at an undefended spot can cripple a city’s production capacity until you can secure and repair the districts. 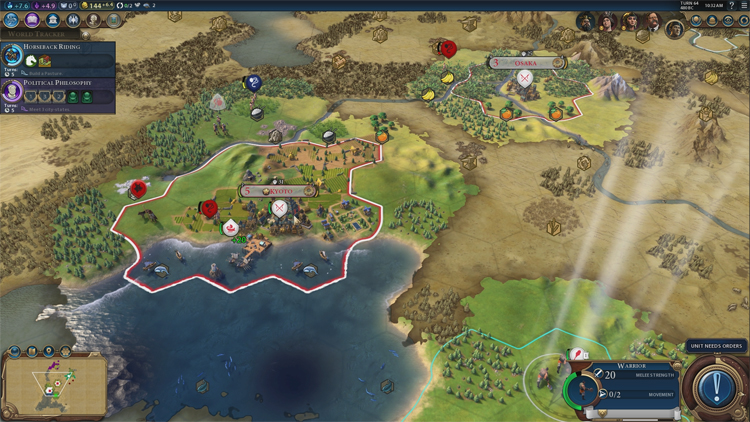 Districts can also benefit from adjacency bonuses, at least if you’re Japan – chaining districts together makes them more powerful. Since they are a part of the city, districts are built using the city’s production menu, meaning they can be rushed with reckless deforestation of the surrounds. The possibility for different builds and strategies is a long way beyond what I had the time to look at and cover, but the new districts definitely feel powerful enough to make up for their vulnerability.

My favorite changes however, come in the form of the AI. I know Civilization has never been known for the efficacy of its artificial intelligence, but for once it managed to impress. In battle the computer actually (tried) to cycle units out of the front lines to heal up. Their ranged units tried to skirmish, withdrawing after each shot if pressed. Barbarians were incredibly aggressive when it came to attacking my units, pursuing when they had the upper hand, and fleeing when they did not. Unfortunately sieges were the same as they always have been, making it easy to exploit the AI’s unwillingness to bring many melee units and their fervor when it came to throwing them into my storm of arrows. The exception to this was that now cities need walls to be constructed before they can return fire – a fact that took me by surprise, and allowed barbarians to have free reign for a worryingly long time. As a fortunate counter to this, it seemed the barbarians were more unwilling than usual to raid and pillage tile improvements. 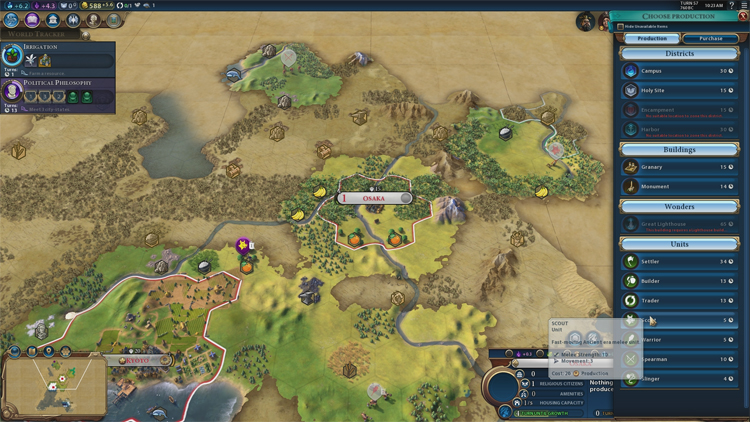 However the improvements are not solely restricted to the battlefield. When it came to diplomacy the AI wasn’t as brutally opportunistic as it can be in other recent grand strategy titles, but it was a hell of a lot more consistent than in Civilization V. This is helped along by the new leaders and the intrigue system. The agenda system for each leader is the driving force behind their behaviour, with one public historical agenda and another that must be puzzled out through intrigue. Leaders also possess personalities that lead them to respect or denounce you based on your actions. For example the end result of these changes was that Egypt denounced me (Japan) for not having a large enough army (Cleopatra respects strong civilisations). This was shortly followed by a declaration of war from Roosevelt who complained my army was too large, and I was in danger of spoiling the continent through war. After fending him off I finally completed the Hanging Gardens of Babylon – prompting China to take advantage of my war-wearied military to declare war on me for having too many wonders (one, precisely). The war was short and bloody, but China sued for peace earlier than I expected: once the odds became about even my opponent began to retreat and defend. I followed up and unexpectedly managed to capture China’s third city, a move which rendered my army ineffective – so China counterattacked, a move I barely held off. To cut a long story short, I managed to eventually capture China’s capital, a feat of production that left my science lagging. This led to a denouncement from the Aztecs, unimpressed by my resource diversity or technical advances. A forward settle on Egypt meant that by game’s end I was at war with two civilisations, denounced by two more, with Brazil hanging in the wings to growl at me menacingly and only England putting up with my behaviour: a move that had more to do with my overly large army hanging out by her front door. 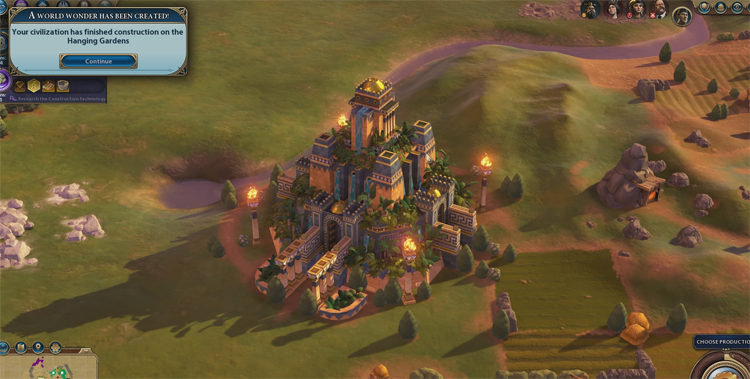 There are dozens more changes, both small and large. Movement around the map is more restricted, with units only able to enter terrain if they have enough movement to pay the complete movement cost – no more moving into a hill with 1/8th of a movement point left. Military units are able to create formations with civilian units or support units such as battering rams or siege towers. Ranged units have no zone of control. Foot units now counter spear units which still counter cavalry which still counters foot – and ranged units still counter everyone. Social policies now come in a form of tech tree similar to the actual tech tree, broadening your options, and adding a ton of flexibility into how your culture evolves and organises. Culture income now ‘researches’ the social policy tree, unlocking more social cards for your deck. Your government type then determines what spaces you have in your tableau to place cards from this deck. Happiness has been reworked to be less punishing of a mechanic, hobbling your cities similar to Beyond Earth instead of the mass rioting and rebellion brought on by the destruction of a single vineyard. City states can no longer be bought en-masse, instead requiring a constant consistent diplomatic effort through research and social policies. Ranged units have less of an early dominance now that they have no zone of command, and now that the starting slingers are only range adjacent. Strategic resources are now no longer ‘consumed’ by building a unit that needs them, instead if you have improved iron you can build as many swordsmen as you like. 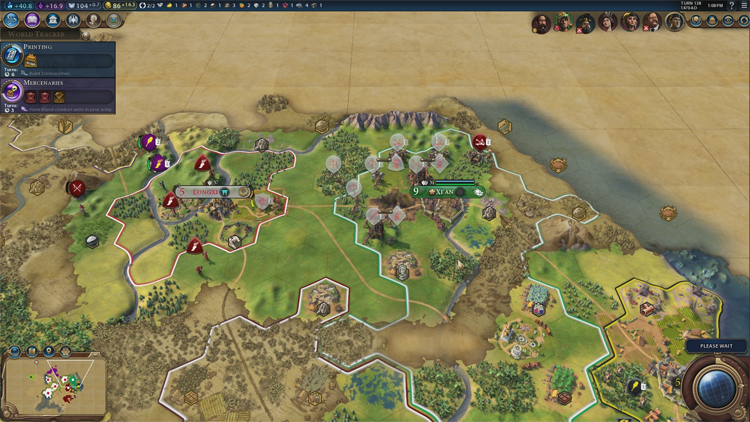 My hands-on time was short, but Civilization VI is shaping up to be another excellent time sink. The changes I saw have helped create a tighter, more tactical experience on the battlefield, with a (slightly) more solid diplomacy system – I found myself flipping off the computer more than once (the leaders can be so damned smug). The art style is a positive change, and the UI is a huge improvement over Civilization V’s. The changes to social policies and happiness give more depth and flexibility in long term decision making when building your empire, and I found the whole experience to have just as much, if not more, depth and complexity than Civilization V. I enjoyed the game: it does a lot of things better than Civilization V, a lot of things the same, but so far, nothing worse.