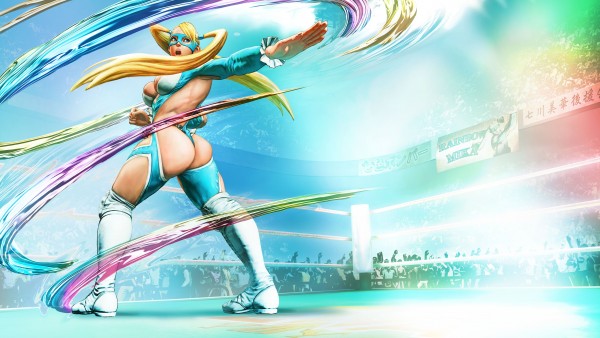 Capcom has revealed that the colorful Rainbow Mika, often simply called R. Mika, will be joining the already announced characters of Ryu, Chun-Li, M. Bison, Birdie, Nash, Cammy, Ken, Necalli, and Vega in Street Fighter V. Rainbow Mika will be playable this weekend at Capcom’s booth during PAX Prime which is being held in Seattle.

To go along with Rainbow Mika’s reveal, Capcom has released a number of new screenshots and a trailer showing her in action in Street Fighter V. They have also detailed the character and given fans some information regarding her V-Skill and V-Trigger and you can check that out below.

R. Mika’s wrestling prowess will be on full display in Street Fighter V, as she dazzles opponents with a large variety of high-flying moves. This time around, her wrestling tag-team partner Nadeshiko also assists in the fight!

By calling Nadeshiko at the right time using R. Mika’s V-Trigger ability, you’ll be able to setup sneaky attacks and punishing command grab mix-ups that are sure to knock the stuffing out of your opponent. Players who enjoy close-combat guessing games and striking fear into the hearts of opponents will find R. Mika an absolute delight to play.

R. Mika pulls out her trusty microphone and gives a heart-pumping monologue to the crowd. The longer the buttons are held down, the more powerful her normal and special throws become!

During her monologue state, she is able to absorb one hit from the opponent and can also cancel the speech at any time by letting go of the buttons, causing her to fling the mic at the opponent.

Now this is wrestling! Depending on the direction held during the V-Trigger activation, R. Mika’s faithful tag-team partner will deliver a surprising, high flying attack at the opponent from different angles: neutral (body splash from above), hold back (dropkick from the front), hold forward (dropkick from behind)