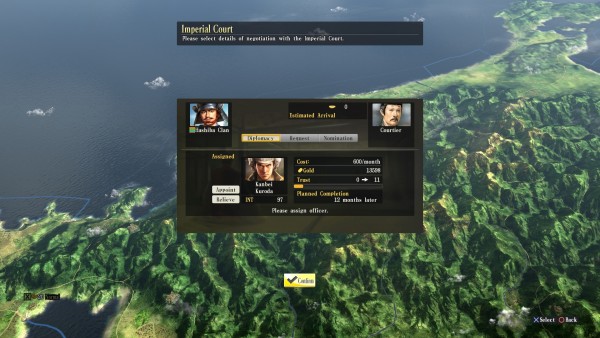 While most of the games that Koei Tecmo produces involving historical figures focus almost entirely on destroying thousands of soldiers and laying waste to entire empires, Nobunaga’s Ambition: Sphere of Influence gives players a few other options to try besides swinging a sword around to try and sway those around you.

In the latest trailer and screenshots for Nobunaga’s Ambition: Sphere of Influence‘s diplomacy and espionage mechanics are shown off. You see, players can use various slow-burning methods of diplomacy to wield fruitful results. This ranges from cultivating relationships with nearby clans and tribes to make sure they don’t join up with enemies or rise up in rebellion or forging a lasting alliance with another lord.

As far as espionage goes, players can also assign officers to take on covert reconnaissance missions or attempt to entice or create discontent between enemy officers. You must be wary however, as your own soldiers can potentially be turned against you if their loyalty or satisfaction levels are too low.

Pokemon + Nobunaga’s Ambition Coming to the U.S as Pokemon Conquest