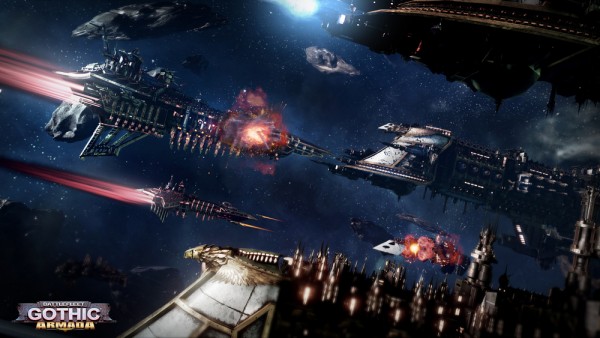 Battlefleet Gothic was a fun little tabletop game released by Games Workshop in the days of yore which featured city sized ships (drastically scaled down) engaging in combat which was an interesting combination of modern day submarine tactics and 18th century ship warfare. Earlier this year, Tindalos Interactive announced that they would be developing a digital adaption of the game. So after catching a hands-off demo of Battlefleet Gothic: Armada, I was able to sit down with two devs from Tindalos Interactive, Aurelien and Maxime Josse, and have a chat about their game. 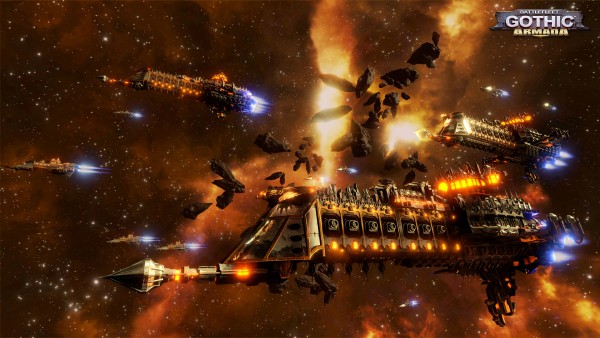 The hardest part so far has been adapting the turn-based strategy of the tabletop game into a real-time video game. I think this is the most difficult thing when working with these kinds of adaptions.

In terms of the range of ships which will be present in the game, how much in terms of ship classes and designs have you put in the game?

For Battlefield Gothic: Armada, all the ships that were in the tabletop (of the factions that are present in the game) will be present.

In regards to the customisation of the captain characters and ships, how far does it go?

You can change the names ships and captains and you can choose from a number of avatars for your captain. Orks are able to customise their ship weapons but other factions cannot in respect to the IP. For other factions specific ships have specific weapons… except for the Orks. 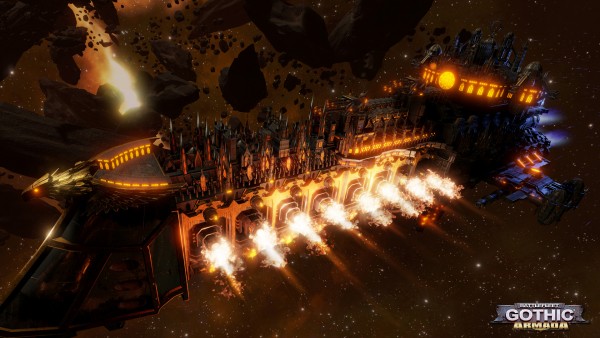 I imagine they just bolt on anything which they think makes the loudest noise… in the vacuum of space. Speaking of the other factions, I believe you mentioned that they would not be playable in this title. Do you have plans to release expansions with the other factions playable if this one is successful?

Of course. We would love to have tyranids and necrons and the rest… but we’ll have to see. This is definitely something we want though.

It didn’t quite appear in the demo which you guys showcased but will ramming as a mechanic be present in the game proper?

Yeah, of course. The things I love in the ramming system is that when you destroy a ship with ramming vessel, it will explode into multiple parts as your ship continues through it.

Similarly, will boarding also be present in the game?

Will the wrecks of vessels remain on the map after they’re destroyed?

Yes, and a cool thing with that is that the wreckage can stop shots. So there is gameplay around positioning your ships behind wrecks to hide. 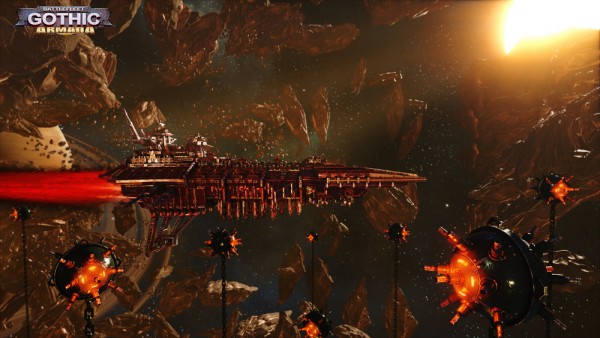 So you can use your dead comrades for cover?

That sounds very 40k. So in terms of chronology, the campaign takes place during the 12th Black Crusade, correct?

Will ‘Blackstone Fortresses’ (Editor’s note: Pretty much the 40k version of a ‘death star’) feature in the game?

*Consults with each other in French* Yes, of course. You will see them.

In regards to the campaign; how in-depth is in terms of strategy? Will there be much for players to strategise over or will the gameplay focus upon the ship engagements?

In the game, we’ll have several missions for the players to take on like ‘convoy’, ‘space station attack’, ‘cruiser clash’… I think about ten missions. In the campaign, you’ll have a main scenario arc and several secondary objectives.

Alright, so the campaign will be scripted as opposed to something more open like a Total War game?

Not exactly. A better comparison would be to the Dawn of War II campaign but in reverse. 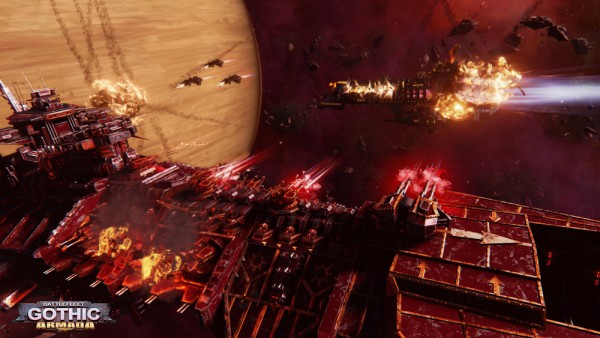 Yes. You start will all the sub-sectors at the beginning and as the game progresses you will be attacked by enemy forces- orks, chaos, or eldar- and you will have to keep all those sub-sectors.

Alright, so is there anything else you’d like to add before we wrap up?

We want to make the BEST space game in the world!

We’ll keep you updated on all news Battlefleet as it comes to air.