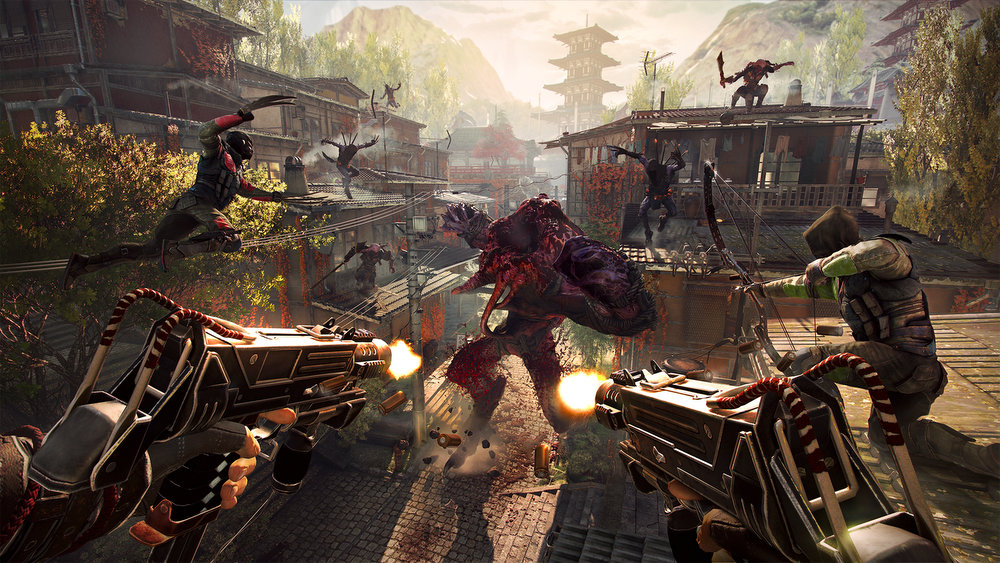 Walking into Shadow Warrior 2, did you guys have a checklist of things you guys absolutely had to do with the second game? Anything on that list you can share with us?

Basically, the most important thing was to extend every aspect of the previous game, meaning adding bigger number and variety of weapons (over 70), creating more opened levels and adding new moves that would support less restricted exploration. It was also important to include more enemy types (over 40), distinguishable not only in their appearance, but also behaviour and animation sets. And not forget about loot and upgrade systems to make every Wang a unique hero.

Seems like Flying Wild Hog is really emphasizing the dismemberment and the gore this time around. How is this affecting the weapon design?

Since Shadow Warrior 2 is more something we could describe as a “first person shoot n’ slash game” rather than typical FPS, we wanted to have different visuals for gore elements, depending what kind of weapon player is using. Thus melee weapons will create mostly “clean cuts” when dismembering enemies, while for firearms we have whole different system that rips off huge body chunks or creates different sizes of wholes on enemy’s body. And obviously guts flying everywhere. 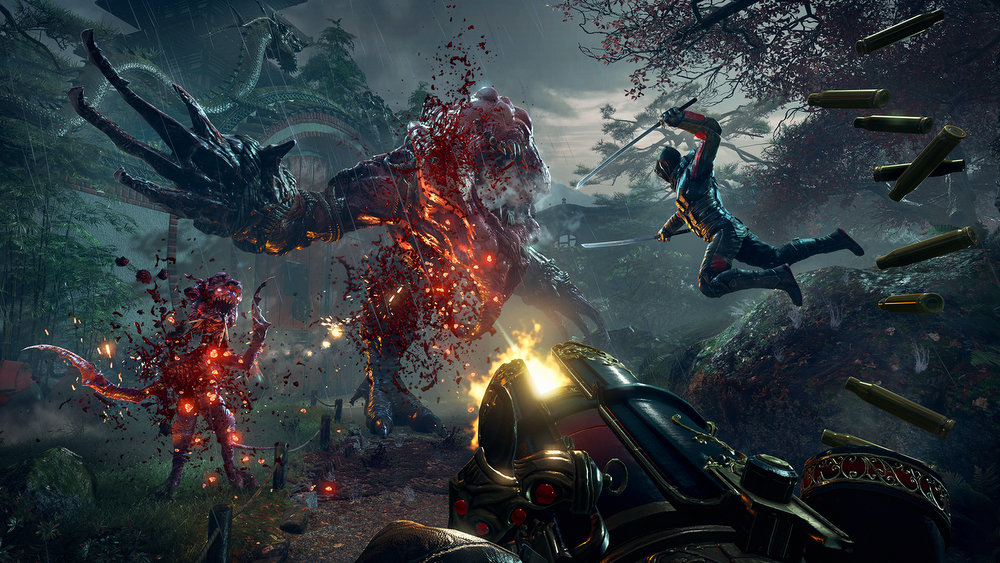 Shadow Warrior had a fluid swordplay system. Will we be seeing any serious change on how melee combat handles in the sequel?

Definitely! We really loved how people responded to melee combat in Shadow Warrior but at the same time, we knew we’ve just scratched the surface. First of all, we’ve improved the controls, so it’s much easier right now to execute special moves. We’ve decreased any delays between animations, so that you can now mix regular attacks with special moves in one fluid combo. Also we removed stamina from the game. Players can use freely moves like dashes, double jumps or aerial dashes in exploration and as part of a combat strategy.

We’re getting a large variety of blades this time around. How does each melee weapon type differ from each other?

Melee weapons differ from each other mostly in speed, range, and attack animations, but at the same time we wanted to avoid drastic differences between them. For us the most important thing while designing melee weapons, was so that each weapon is effective against all enemy types, so there are some differences but we wanted all blades to have similar feeling. 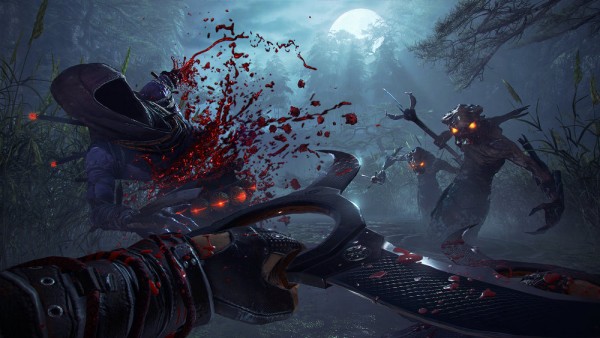 The Shadow Warrior series has a B-movie vibe. Does the team have any B movies that inspired the game?

Quentin Tarantino’s Kill Bill and John Carpenter’s Big Trouble In Little China are the movies that inspired us the most, but there’s so much more titles that influenced the overall tone of the world of Shadow Warrior, ranging from Hong Kong action cinema, through anime, to Hollywood action movies from the 80’s.

Creating a tightly scripted campaign for one person is quite different from creating a campaign mode for four players with replayability in mind. How are you planning to tell a cohesive story to four people, while still keeping things fresh for each playthrough?

That may be a surprise but, there’s basically no difference story-wise between playing the game solo or in co-op mode. The thing is, whether playing through main story missions, optional side quests or some random bounty hunting missions, every player sees himself as Lo Wang in first person view, while other co-op partners look to him like ninjas. Thus each of the players is able to experience the story as the main hero of the game, however the presence of co-op ninja characters and Lo Wang’s affiliation with their clan is also explained in the story, so they don’t feel as completely random character’s made only for the sake of having a multiplayer mode in the game. 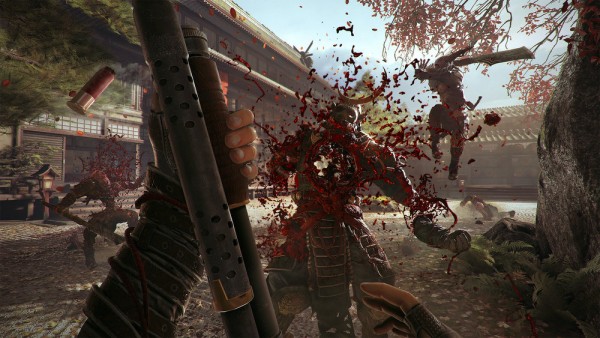 Should we expect some other co-op modes other than the campaign co-op?

Any lessons learned from the first Shadow Warrior game that is influencing development on the second game?

After Shadow Warrior was released, we’ve been looking very closely at what people liked or disliked about the game. Things like bigger and more vertical levels or bigger variety in weapons and enemies were definitely influenced by people reactions. Also I think the new upgrade system, that’s based on grinding for better loot is also kind of a response to the fact that many people found katana to be the coolset weapon in first Shadow Warrior, that completely outshined firearms. In Shadow Warrior 2, we wanted to achieve better balance between melee combat and gunplay and we hope that especially firearms would benefit from new upgrade system, as it gives better level of flexibility in upgrading a single weapon in so many much ways than before.

Shadow Warrior was a real breath of fresh air, visually speaking. The game had a lot of bright colours, while other FPSes on the market was sticking with the gritty brown colour scheme. What is the inspiration for the visual design of the series?

I think, it’s not entirely our approach for the visuals that differs Shadow Warrior from other FPS games on the market but the place in the world where the game is set. Most of action games nowadays take place in cities destroyed by military conflicts or some kind of apocalypse. Shadow Warrior is set in a fictional Japan, and this country is known for the beauity of it’s landscapes and architecture. Our art team spent lots of time searching for reference materials when they started creating the levels, so that the beautiful environments would stand in contrast to violent and gory gameplay. 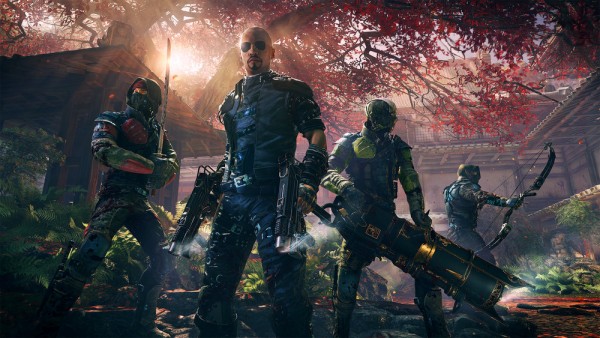 Video games have exploded onto the mainstream since the original game was released in the 1990s. It has become harder to get away with really off-colour jokes, especially involving race, without a ton of outrage and fury. The original game took a lot of flak about its portrayal of Asian culture, but the reboot managed to dodge most of the outrage. How did you walk that line between keeping in the spirit of the original game and being too offensive for release while you write the script?

The moment we started development of Shadow Warrior reboot we replayed the original game from 1997. I think what really made Lo Wang such a cool character was not his offensive humor but rather the fact there were so many references to pop culture throughout the whole game. This is something we wanted to built the humour of our game around and create a character that players can relate to. That’s why we’ve decided to make a bit younger “geek type” Lo Wang – a guy who’s a fan of action movies, comic books and video games.

Thanks to Pawel Kowalewski for joining us on the interview. Be sure to check out the meaty 15 minutes of Shadow Warrior 2 gameplay that was released over E3. The game will launch sometime in 2016 for PlayStation 4, Xbox One, and PC. 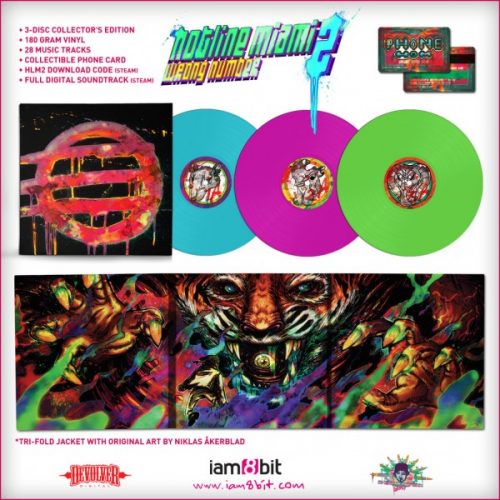 Shadow Warrior Remake Gets Some Screenshots 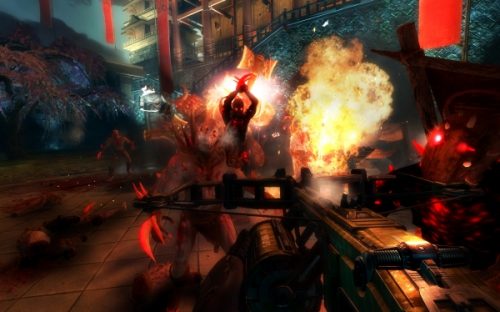