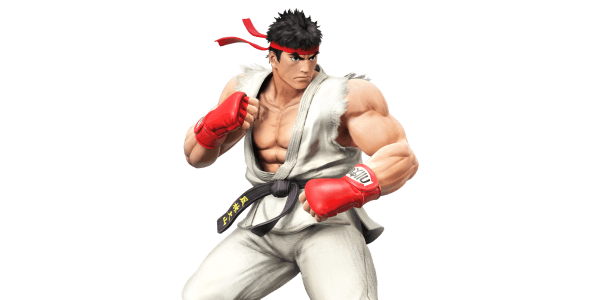 The world is full of clever people these days and that includes people that can somehow hack update data and show us two new awesome characters that will be added to the Super Smash Bros. Wii U and 3DS roster. Roy from Fire Emblem (returning from Super Smash Bros. Melee) and Ryu from Street Fighter will be joining Lucas from the Mother series to bring the number of DLC characters up to four. Roy seems to have retained many of his moves from his Melee iteration.

Ryu is perhaps the most interesting of the lot, being a third party character from Capcom and having never been present in a Smash game before. He has two Final Smashes, the Super Hadouken and a finisher Shoryuken which looks like an ultimate from Street Fighter IV. Which Final Smash is used will depend on your distance from the opponent. Rumours are going around that inputting his specials with their appropriate Street Fighter command inputs will enhance that move. Better get practicing that down, left-down, left, B input!

We are also getting two new stages. One is the temple stage from Street Fighter and the other is Kirby’s Dreamland, a returning stage from the original Smash Bros game. The Miiverse stage that was announced long ago is scheduled to release alongside Lucas on the 14th in the U.S. The leaker has posted a video below containing gameplay of all three new characters but we can’t guarantee it will still be up for viewing at time of reading.

Nintendo most likely plans to officially unveil this news in tonight’s Super Smash Bros. focused Nintendo Direct, but I now hope they have something else up their sleeves as it will be a pretty flat announcement if all we get is known information. Speculation of Roy and Ryu’s inclusion started months ago when sound files of the characters victory themes were found in the last update.