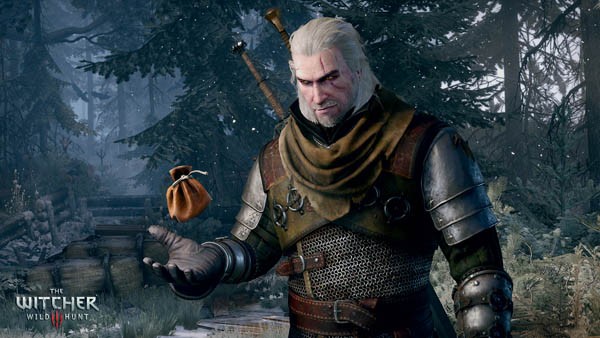 From its humble beginnings as a small Polish book series in 1992, The Witcher has exploded into a multimedia franchise. Books, songs, a TV series and of course video games of various genres have turned The Witcher into a bona fide global sensation. Now, two years after their last installment, CD Projekt RED are back with The Witcher III: Wild Hunt. While the game is still a few months away from release, I got to sit down and play a bit of Geralt’s next adventure and after almost three hours with the game, I can say that I am excited and cannot wait for the game’s May 19th release date. So sit back, relax and let me regale you with tales of monster hunters, horses and giant bears. 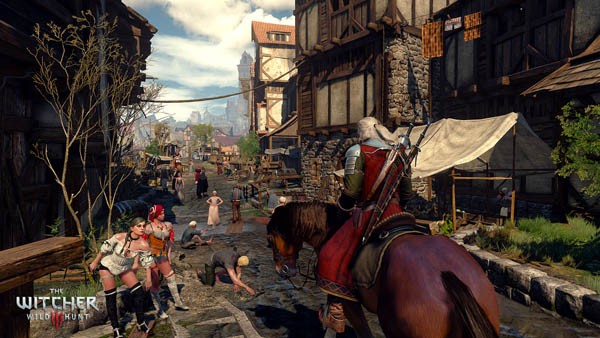 Set after the events of The Witcher II, Witcher III starts off in a dream sequence where new players can familarise themselves with the controls and mechanics of the game. The Witcher II gave players a similar tutorial area should they need a refresher course. Un like Witcher II however, this time around the tutorial forms part of the main plot and cannot be skipped. However players can opt out of any part of the training that they feel comfortable with.

The Witcher III: Wild Hunt is set to be the concluding chapter in Geralt’s stort but players who arent intimarely familiar with the franchise wont find themselves at too much of a loss when learning the game’s plot. Summaries of previous adventures and one-off throw away lines manage to create a narrative style that embraces both new and returning players. one allusion in particular happened early in the game where Geralt recounts an injured soldier talking about the merits of certain monsters and how their eating of dead flesh prevents disease and plague (which happens during the tutorial prologue of The Witcher II) – If you hadn’t played the previous game it comes across as a humorous anecdote but it adds a bit of a story link for those who have.

After the little dream sequence, Geralt wakes up along with fellow Witcher; Vesemir. There, players are introduced to the new horse riding mechanics. I’d like to take a step back and talk about the size and scope of The Witceher III. Although I havery only spent a short amount of time in this world, but I can already tell that the map is absolutely massive. Horses are the bare minumim that you will need to get around this colossal landscape. The developers have previously stated that the map is roughly “30 times” as big as The Witcher II and “20%” larger than Skyrim, and I am prepared to believe those statistics. Rivers, townships, dense forrests and magnificent castles are just some of the landmarks that you will come across during your adventure with the game. Luckily horses aren’t the only way to get around, with fast travel and boating, being damn near vital to traverse the world. 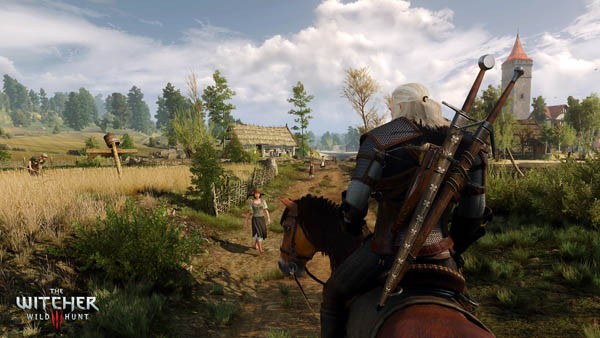 Like previous Witcher games, Geralt travels around the vast, wide world and helps out where he can all while working towards a particular goal (or two). Bulletin boards make a return as a way for Geralt to earn a little bit of extra cash on the side. It is always a drag in games where the side missions feel like boring repetitive chores and although it is still too early to tell, it looks like this may not be the case here. A tonne of mission variety is key here, with  some missions involving the famous monster hunter looking for lost soldiers, investigating the arson of a blacksmith’s shop or if he’s lucky; engaging in some hard-core monster hunting. More than the variety though is the fact that each of the side missions is introduced with a nice sized chunk of story. The fact that we are introduced to the people and their plight really helps them feel substantial and like they matter in this big wide world (as opposed to just being excuses to level up/earn some quick cash). 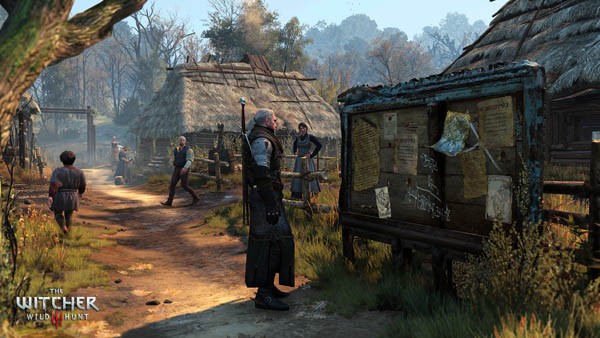 One of the things I’ve always found hard to get into with The Witcher games was its combat. It had a pretty steep learning curve that really put it apart from other action RPGs. This time around, the combat feels so much more fluid and responsive while still keeping the same fundamental principals of the series. Swordplay interspliced with magic spells is still the go here and it has never felt this good. This new installment seems to retain the same style of preparing before heading into battle theme going on that again has always helped set The Witcher apart from other games in the genre.

One particular segment involved a royal party being invaded by werebears, forcing the player to assist some NPC soldiers in hording off the attack. The fight is difficult and requires careful planning and isolating the bears one by one to ensure survival. Thinking, planning and THEN acting is definitely the name of the game. 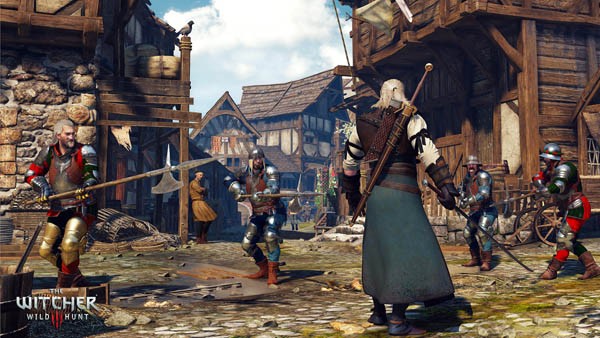 I want to take a moment here to talk about the new mini-game that is being introduced into the game; Gwent. Gwent is a card game that puts two players against each other in all out war. Kind of a medieval version of Hearthstone or Magic: the Gathering, Gwent has you putting soldiers in various positions on the field in order to rack up the damage and sling it at your opponent. I didn’t spend too much time with Gwent during my demo but the game intrigues me. While it doesn’t add much to the overall universe of The Witcher, it is a cool little addition that card gamers will surely get right into. There are two decks being released as part of the colcollector’s edition of the game and I wouldn’t be surprised to see them released as a stand alone package down the line (I know that I would want to pick up a set if they became available). 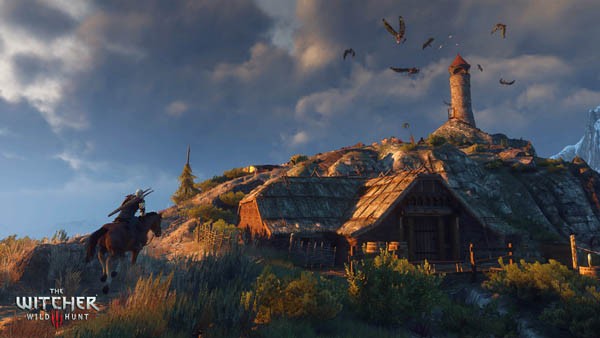 In terms of visuals, The Witcher III is absolutely beautiful. The two year difference and jump in hardware from The Witcher II has really allowed for a tonne more detail in terms of environment and character models. Geralt’s age is shown clearly on his face and his scars look lifelike and show the wear and tear of a man with a sordid past. Clothing, hair and even the light foliage of a field all pop and look great. It probably isn’t the best looking game currently available, but the fact that it looks as good as it does with the size of the game being so large is the most impressive feat. Loading times are close to nothing, and despite still being a few months from release the game ran buttery smooth.

If I have one complaint about this latest installment in the game is that some of the controls were a little clunky. This was especially true of the horse-back movement where the game seemed to not respond to my commands regarding the speed of my steed. I would tap and hold the required buttons only to have my horse stick to its slight canter instead of bursting out into the sprint that I desired. On the flip side however, with such long stretches of map to cover, they have made it so you can just hold down a single button and your horse will follow the well worn paths, meaning that you don’t have to screw around with light changes in direction just to get to the next town. 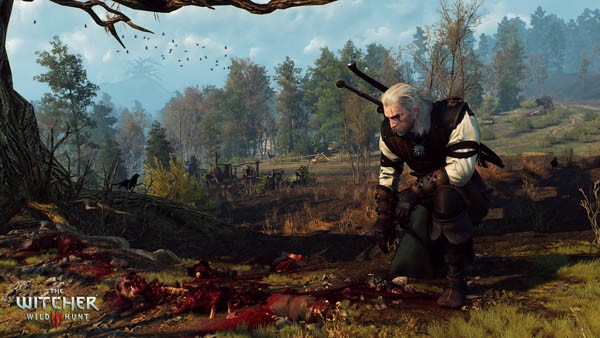 While my time with the Witcher III: Wild Hunt was brief, it was engaging, exciting and downright fun. The series’ mature themes and knack for storytelling still run within the heart of the game so you can all rest easy on that front. I sadly didn’t get to experience any of Ciri’sCiri’s gameplay and still know very little about the story BUT that just means I have all the more to look forward to when the game launches on May 19th.