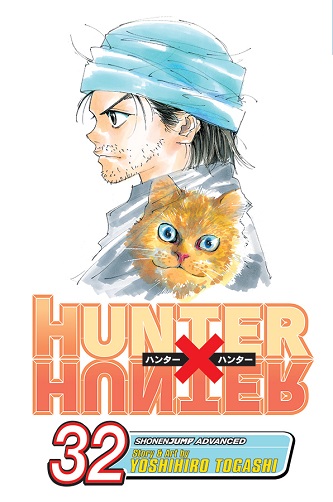 Last week we learned that the Yoshihiro Togashi would be ending his longest hiatus yet sometime in June by bringing out a new chapter of Hunter x Hunter. At the time we did not know exactly when it would happen in June but it looks like it will be for the first issue of the month.

Viz Media, who will be digitally simulpublishing the manga once it returns in Japan, has announced that the first chapter will be released on Monday June 2nd. This means that anyone who happens to be subscribed to their Weekly Shonen Jump service will be able to read the new chapter in English as soon as it is released. At the same time Viz also wanted to remind everyone that they are still selling all volumes of the Hunter x Hunter manga both digitally and physically, including the final volume released before Togashi’s hiatus, volume 32 shown to the right. Viz has said that all future volumes of the series will be published twice a year, though it is uncertain exactly how long Togashi’s return will last.