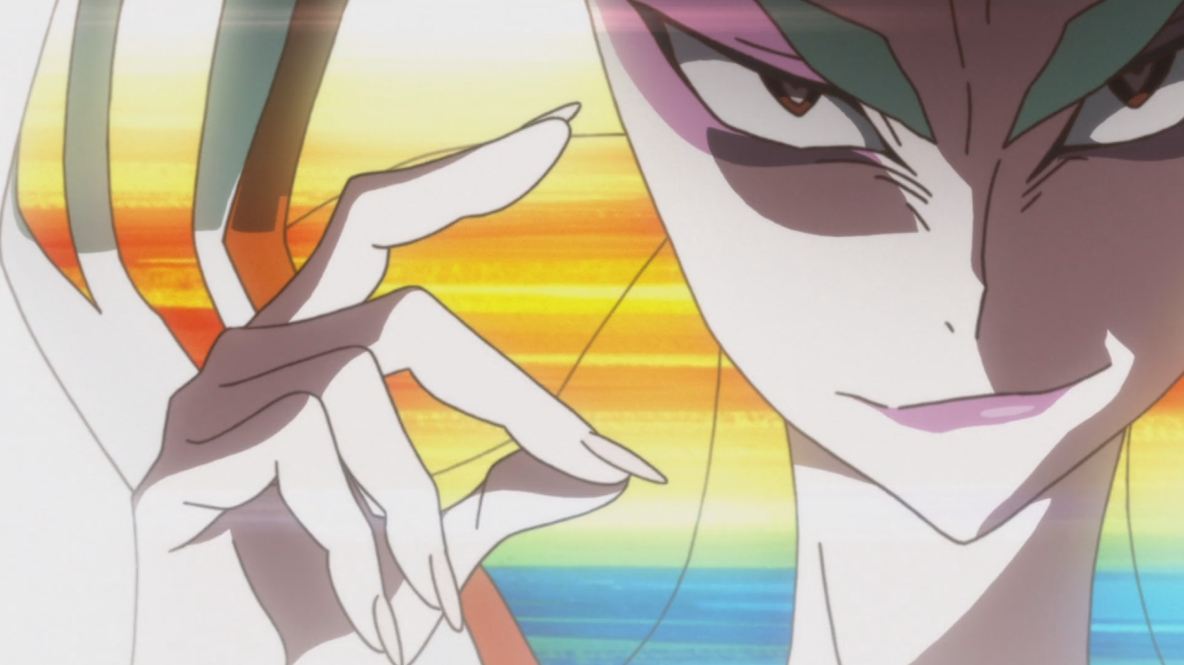 The one who would end the world

Well, this is it guys. From the moment Ryuko first walked into Hannouji Academy, we knew that her journey would end. Not that knowing that makes saying goodbye any easier. While all good things must come to an end, all truly great things end with a bang and I can’t think of any show that’s gone out louder. So buckle up for your final dose of beautiful insanity as Kill la Kill comes to a close.

In the climatic end of the penultimate episode, Ragyo donned the Ultimate Kamui, intent on using her tremendous power to render the very Earth itself a cocoon. One that will sprout forth countless Fibres of its own, dooming the cosmos to an infinite cycle of birth, evolution and destruction. As far as evil schemes go, this one is pretty out there. Like way out. If nothing else, it does an excellent job of showing us just how indoctrinated Ragyo is into the Life Fibre mindset. It’s at the point where she regards her humanity as nothing more than dead weight, blaming it for her inability to defeat her daughters. While this sounds brutal, it is also rather horrifying when you really think about it. Despite her actions, despite her acceptance of this dominating alien race, there remains a glimmer of decency. One iota of a soul that understood the error of the Fibre way and sought to hold her wrath back. Though it failed completely it raises the question: Was there ever a time when Ragyo was truly human? Even in flashbacks, she was already obsessed with the Original Life Fibre. Was her adherence to their life cycle her natural conclusion of the universal truth? Or was she corrupted by a so hell bent on self preservation that it would doom entire worlds? The subconscious is a mysterious force and if it is any true indication of the soul’s desire, Ragyo may just have been the most heart wrenching victim of all. Though there is the distinct possibility that she was simply an egomaniacal nihilist with delusions of grandeur and an inability to cope with the existence of a power that dwelled outside the confines of humanity’s grasp. Either way, there’s no question that she was one hell of a villain. 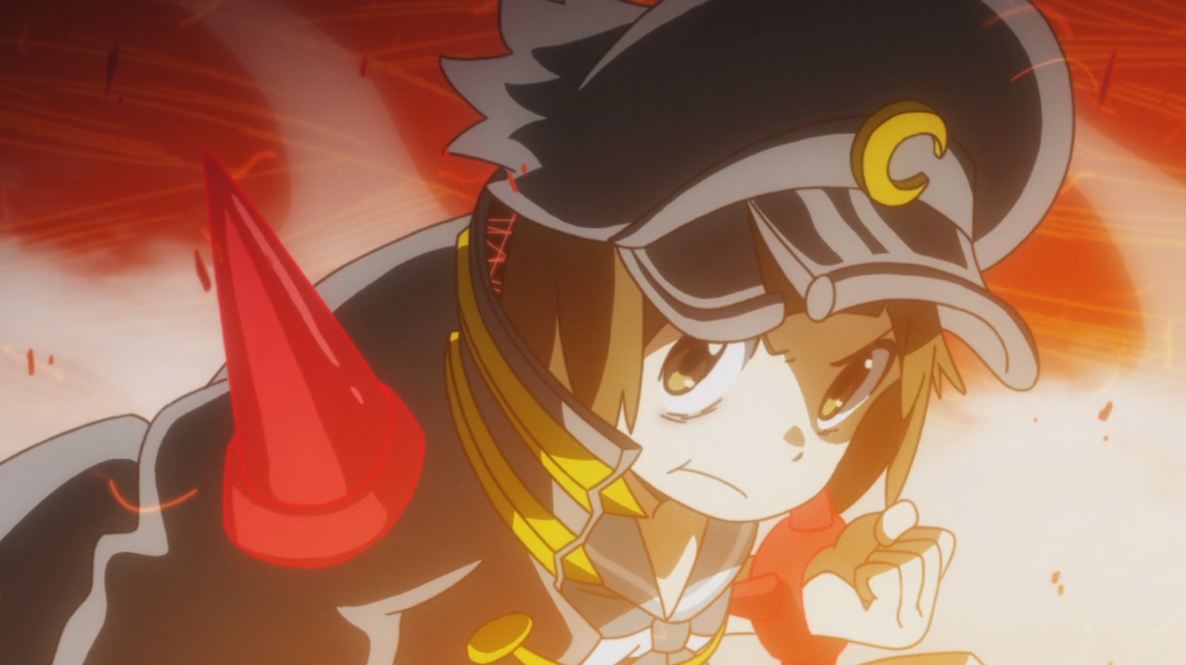 A slacker no more

Without a shadow of a doubt, the true essence of this final episode was carried by Ryuko and Senketsu. After countless existential crises and conflicts of the heart, both finally came to terms with the truth of their combined existence. Though different in form, they are both human and clothing, yet also neither. Possessing the best and worst qualities that both species can manifest, they live as an evolution of both. A team that can break the bonds of their instincts and build their own destiny. Now how awesome is that? A true summation of their complex relationship, lending credence to everything that has happened to them over the course of the series. They’ve come a long way haven’t they. Hell, when the series first began they could barely fight for five minutes, now they stand face to face with the manifestation of an entire species and don’t bat an eye. Now that’s some serious character development right there. Though it may sound contradictory, their ability to exist as individuals also expresses how great a team they make. Though undeniably powerful, Ragyo shares no camaraderie with her clothing, thus creating a unity of submission (though by who is somewhat of a mystery). Ryuko and Senketsu however are two ridiculously stubborn characters who manage to form a bond of love and support in a way that creates a power above and beyond the sum of its parts.

Despite the true battle being the domain of Ryuko and Ragyo, by no means did everybody else sit on the sidelines. In true Kill la Kill fashion, every member of the main cast got a chance to showcase the extent of their own power and steal the spotlight for a few brief moments. The Elite Four and Mako not only destroyed the Transmitter that would doom the world, but also survived multiple encounters with Nui, the girl who at one point drove Ryuko to the point of suicidal insanity and subsequently shredded Senketsu. Oh, she also murdered Shoichiro Kiryuin and created the Shinra Koketsu that Ragyo so proudly wears. Man, Ragyo reals takes the focus off just how horrible Nui is doesn’t she? Kind of like how the whole “Humanity is destined to become nothing more than an incubator for an incomparable alien race” plot distracted us from the fact that the anime began with Ryuko longing to avenge her father. They were simpler times. That in mind, this episode was the culmination of what has been one hell of an explosive evolution of plot. I certainly didn’t predict that this is how everything would end up, though it was definitely an awesome surprise. 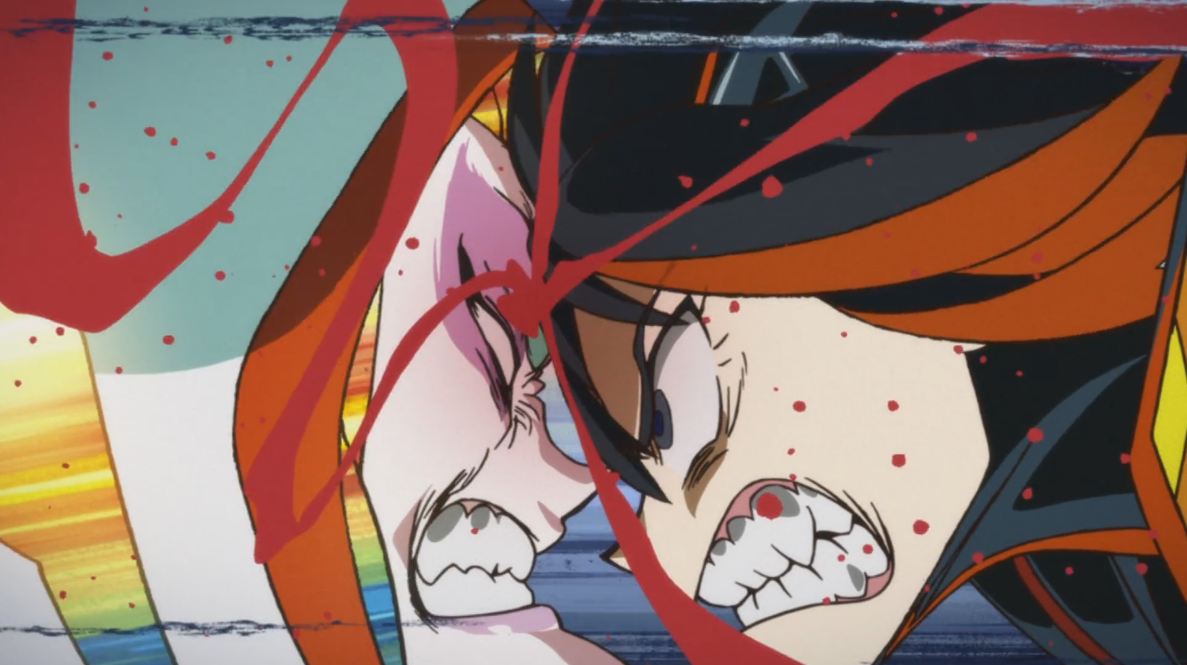 Head to head one final time

I also appreciated how the episode did not succumb to the compulsion of undoing this plot progression, as some series tend to do. For example, Ryuko did not have a final climatic duel with Nui to honour her father, rather everybody realised that such an act would have been frivolous compared to the threat that Ragyo presented. It’s also thanks to the story’s development that the lack of this direct resolution did not seem like a loose end, just simply something that no longer mattered as much as it once had. Truly an accomplishment considering just how unceremonious her end was. Though it was indeed fitting of her true nature because when all is said and done, despite her undeniable influence on the main cast, Nui was never anything more than a pawn. An insane, inhuman, incongruous pawn.

Even with all of that considered, where would an anime be without transformations? I’m not exactly sure because this episode alone had more power ups than you could ever want. On both sides of course. True to her designation as the will of the Life Fibres incarnated, Ragyo continued to evolve beyond the bounds of humanity as the episode progressed. Her facial expressions did an excellent job of showing the multitude of emotions she felt combating Ryuko. Namely confusion, fear and rage. The Ultimate Kamui also acquired a new form that was so logical that it looped back around to being insane. Both Senketsu and Junketsu possess the ability to transform into a jet-like form, so naturally the next step up would be a rocket. Sensible. Ludicrous. Awesome. However, even when compared to said rocket propelled Kamui, the standout of this final episode was the full awakening of Ryuko and Senketsu’s power. A 24 episode long build up that culminated in one glorious transformation: Senketsu Kisaragi. A being that represented humanity’s last hope, their only hope. Having consistently evolved throughout their numerous fights, it was inevitable that it would happen one final time. It may sound like a small detail, but seeing Senketsu’s eyepatch shred amidst a storm of unbridled power was truly satisfying. If you really want to look into it I’m sure you could derive the idea that it was a representation of him finally seeing the entire truth of his own existence, but in all honesty it was just cool. 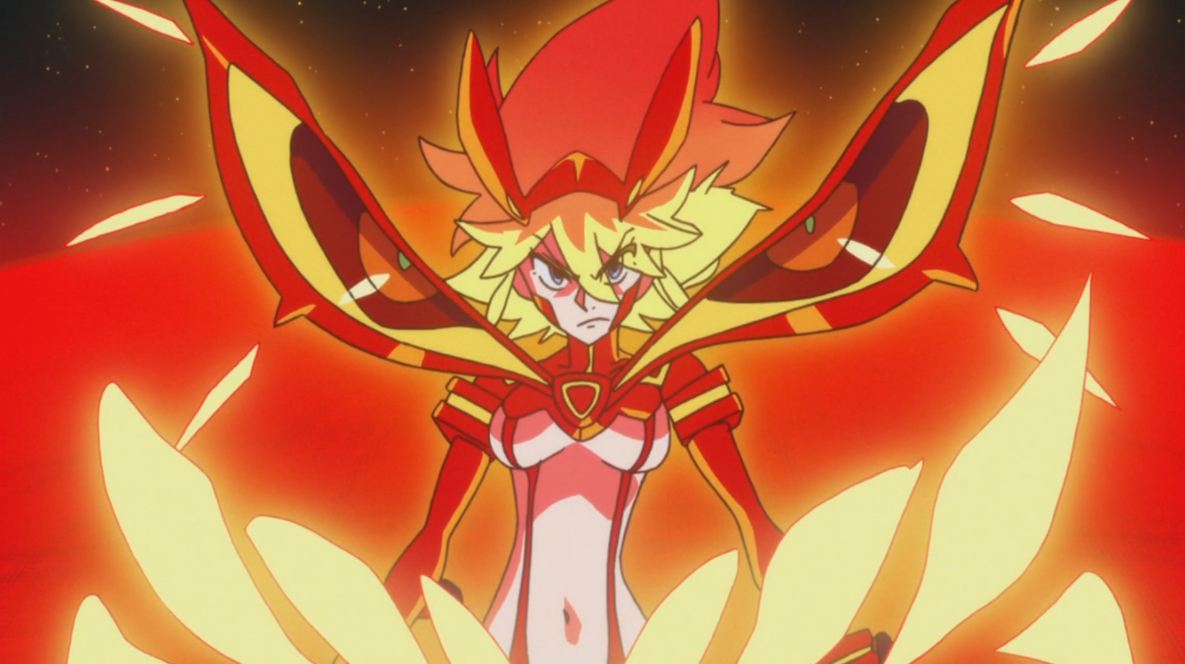 Humanity’s will brought forth

During their final clash far above the world, I absolutely loved how blazingly defiant Ryuko was, refusing to let Ragyo manipulate her anymore. Even in the climatic moments, villains have a habit of throwing out that one line that causes the hero to pause. To hesitate. But we’ve already seen that, Ryuko has already seen that. So in this final bout, Ragyo’s words amounted to nothing. Her power amounted to nothing. In the end, she was completely dominated by the will of humanity. It’s not everyday that epic and ironic combine, but Kill la Kill managed it.  I also loved how this fight paralleled another climatic battle. Not from earlier in the season mind you, but earlier in the episode. When Ryuko lunged at Ragyo in nothing but her underwear, she was swiftly dispatched, but when clad in the collective will of humanity and thrown into an identical situation, she prevailed.

However, amidst the joy of victory lurked the sadness of loss. Despite all that had happened, all of the trials and tribulations they had suffered through, Senketsu could not survive this final battle. Though undoubtedly upsetting, I have to give the series credit for following through on this tragic moment. There’s nothing more undermining than having a character die and then be revived later on. It removes any sense of emotion from the situation. It was also oddly poetic in that, after creating a world free of Life Fibres, he too perished. Showing us without a doubt that Senketsu was a one of a kind piece of clothing.

In Senketsu’s sacrifice, we also saw the birth of something beautiful. A relationship that after so long can finally begin. As Ryuko plummeted back to Earth, lost in her grief, a voice cried out to her. A voice that snapped her out of her emotions as we’ve seen happen so many times before. Only this time it wasn’t Mako’s voice: it was Satsuki’s. Finally revealing her true emotions, Satsuki screamed and ran in a manner totally opposing the image of her that we had built up over the course of the series. Never has such a manic face or overzealous sprint seemed so heart warming. After finally coming to a stop, Ryuko was also able to say that which she had struggled with no so long ago. After everything they had been through together, she was finally able to call Satsuki what she had never been called before: Sister. 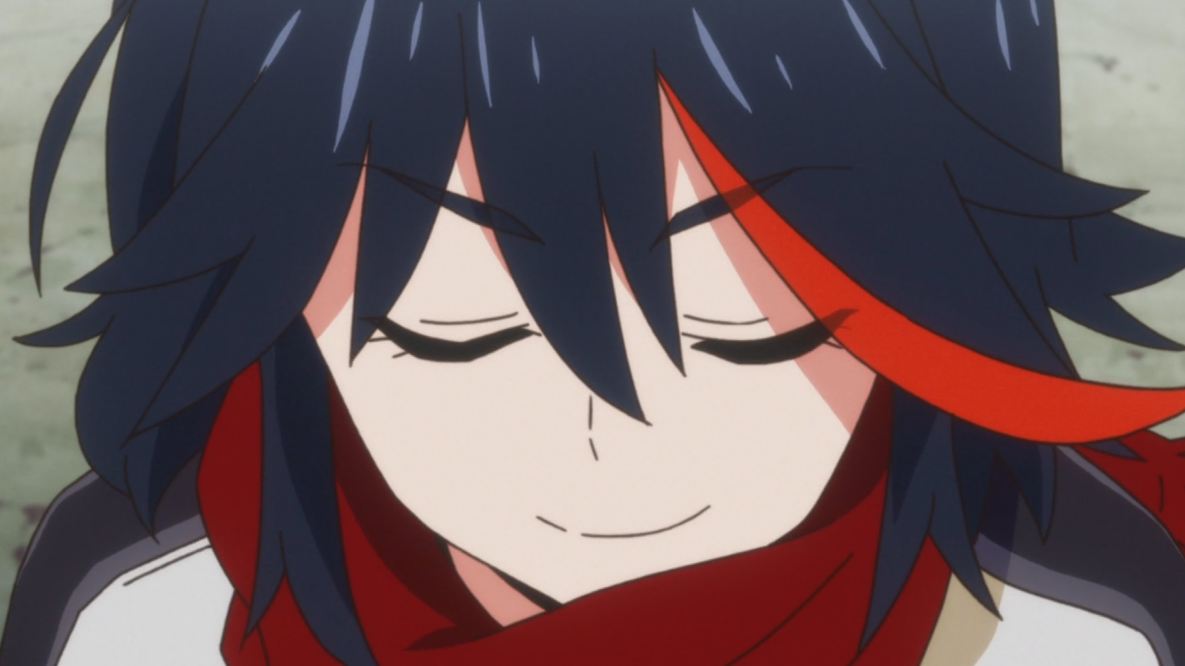 Gone, but not forgotten…

At its core Kill la Kill is undeniably a story of evolution. Of building upon what you have. Surpassing your limits until your old self seems like nothing more than a starting point that led you to where you are today. Sure it’s surrounded by ridiculous characters and animation that borders on the insane, but the message is still there. From a series that began as nothing more than mismatched moments of awesome, came a story that showed how our own perception can alter the world around us. We saw rage consume a hero, love redeem a villain and friendship save the world. It’s been a wild ride and even though we may never experience it the same way again, we will never forget the first time we saw Kill la Kill.