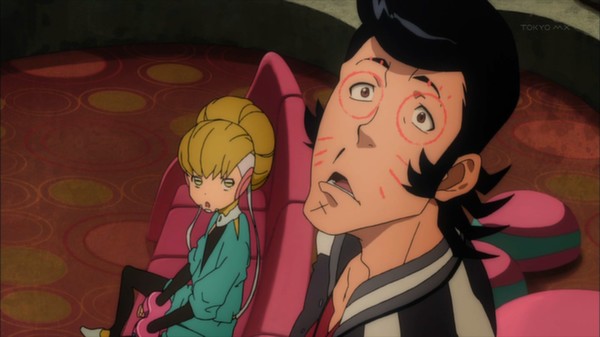 Another week, another victim of the Jigglypuff epidemic

Space☆Dandy
Episode 5 – A Merry Companion is a Wagon in Space, Baby

Do you want to know the bane of being an anime reviewer? Every time you claim that a series is amazing, it immediately bombs, and every time you say that it’s the worst thing since sliced Hitler, it makes the biggest comeback ever just to shut you up. Not a week on from saying that Space Dandy wasn’t worth carrying on after episode 4, Bones decided that now would be the perfect time to blow me away and left eating my words. Not only was this week’s foray into the life of Mr S Dandy the best episode of the series so far, but it is one of the most enjoyable self contained, single episode stories to be released in a long while. 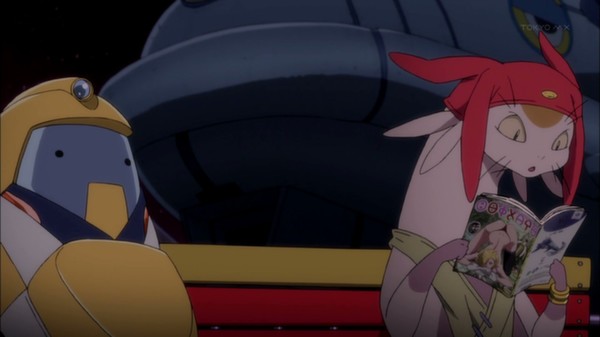 He’s not coming back for us is he?

This week Dandy managed to capture an extremely rare alien, a young Gentooan girl called Adélie with the ability to shock any living creature and transfer its mind into a puppet. However, the universe is just as cruel in Dandy’s time as it is in ours and he returned to the Aloha Oe with his prize only to find that it had been towed along with QT and Meow, forcing Dandy to take her to the Alien Registration Centre on the train. To stop her running away, he promised to take her to an address written on an old picture which transpired to be the last known address of her grandfather, the only person left for her to turn to in the universe according to her deceased mother. After finding that he no longer lived there, Dandy left Adélie at a hotel and under the pretence of going to Boobies, spent the night scouring the streets to find any clue that might lead him to her grandfather. One chase scene involving a stuffed orange penguin Dandy defying biology and taking flight to catch two alien hunters fleeing with Adélie on a train later and she was safely reunited with her grandfather. It was then that the pretty young girl vowed to grow up quick so that she could join her baka hero on the Aloha Oe and my heart melted a little. 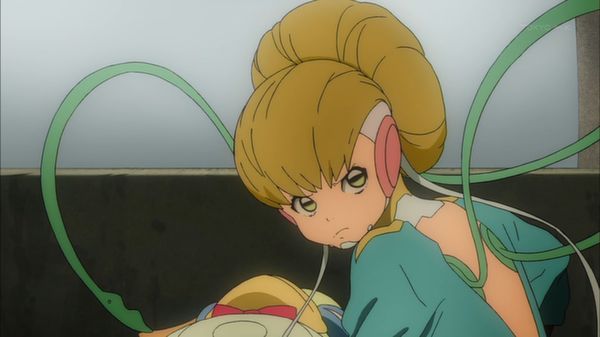 First the marker, now vine whip? Are you sure you’re not a Pokémon?

Depth, how I have missed you! We’re talking a shallow puddle rather than an ocean, but Dandy became the first character to dip his toe into the warm waters of character development this week by growing a heart that yearned for something more than a cheap drink and a cheeky grope at Boobies. Going against his carefree nature he gave up his greatest worldly desires to search out the girl’s grandfather. During the time he spent with her he even learned to care for her a little and she started to see more to him than the selfish, perverted idiot that he normally comes across as. That’s more than I can say for QT or Meow who have both been killed by Dandy at least twice so far. Maybe he was just nurturing her so that one day in the future the, “big breasted, shapely assed woman,” he wished her to grow up into will come aboard the Aloha Oe, but I guess we’ll never know. 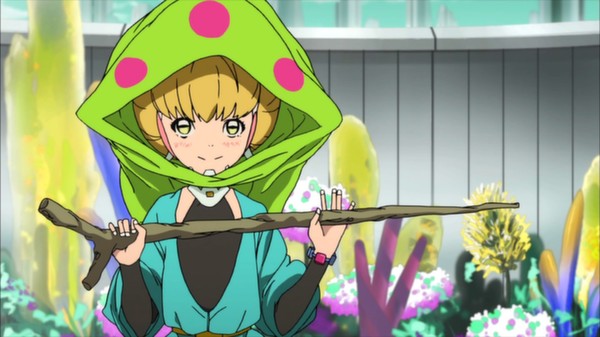 I’ll be a White Mage. No one ever hurts the White Mage right?

Considering its run, it pains me to draw this comparison, but was anybody else left feeling like they’d just watched an episode of Cowboy Bebop? High praise indeed, but I can think of at least a few episodes of Bebop that were worse than episode 5 of Space Dandy. I even felt a little Spike Spiegel radiating off of Dandy for a second or two as he let his selfless side break through while maintaining his cool, if not extremely silly, nature. Put that alongside his immediate dislike of kids and Dandy begins to feel more and more like a fitting homage to the legendary, afroed hero of old.

Adélie’s character design was very heavily inspired by classic anime heroines which was refreshing considering how obscenely overly cute lolita characters are nowadays. She was not sexualised or forced into too many scenarios designed to highlight her moe factor and for that I have to commend Space Dandy. It would have been far too easy to make Dandy a closet lolicon, but they chose not to tread that path and kept him faithful to the good women at Boobies which doesn’t exactly add a lot of class to his character, but it keeps him out of jail at least! 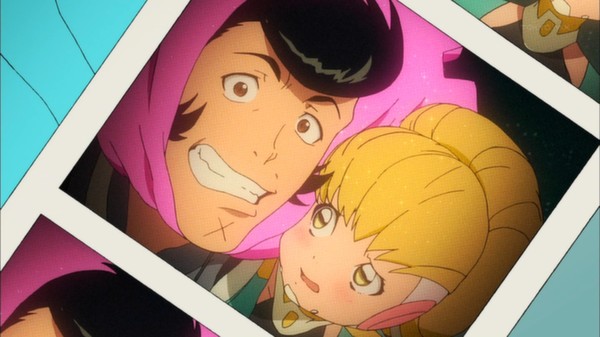 Jokes aside, this scene was lovely. I hope we see more like it!

All in all, this episode marked the first genuinely quality episode of the series and highlighted the potential Space Dandy has when it isn’t trying too hard to be quirky and different. Flairs of characterisation and a backwards leap away from the bad jokes that have left a stale taste in my mouth these past few weeks have left me actually looking forward to next week. Give me more of this Watanabe! It’s what you’re best at and what every fan of Bebop wants to see more of. Will we end up seeing more brilliant episodes like this? Stay tuned and find out.