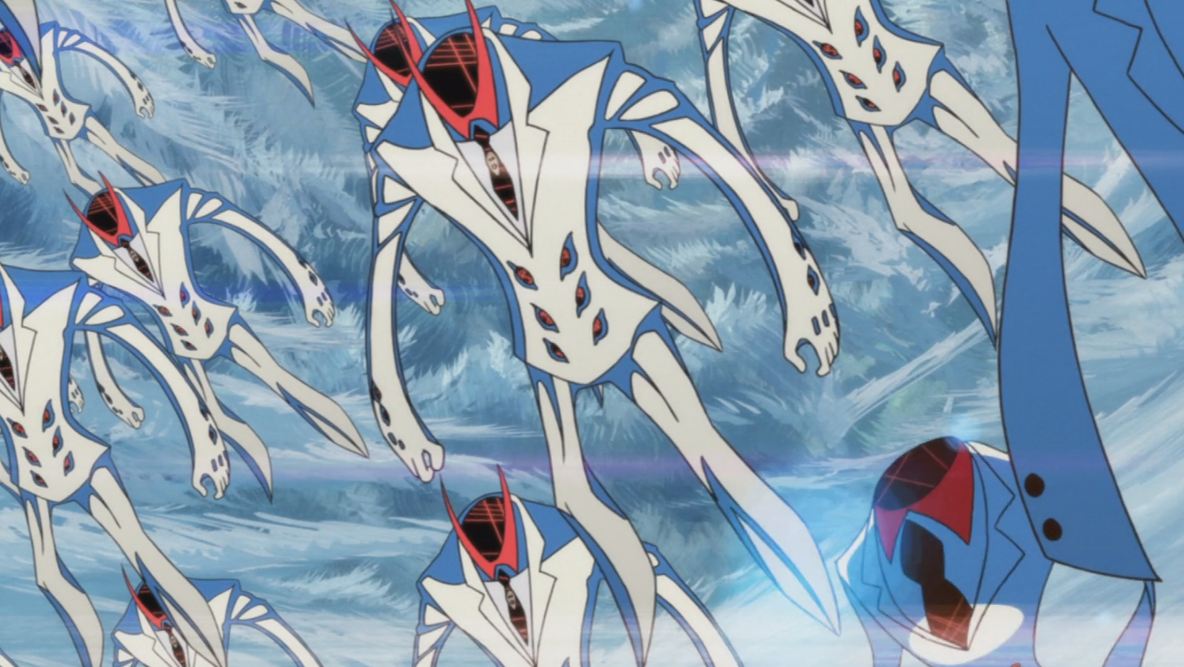 Who knew the Apocalypse was a formal event?

Things weren’t exactly looking up last week were they? Well I hate to break it to you, but the situations doesn’t really improve this week. Quite the opposite in fact. With her heart in Ragyo’s hands, literally (and metaphorically on some level), there was nowhere to run when the barrage of truths flowed forth. Now we get to see how these revelations affect everybody. Nothing will ever be the same.

So the Cultural & Sports Grand Festival took a decidedly vicious turn didn’t it. The situation isn’t exactly peachy as Ryuko learns from her newest mortal foe that her life may have been somewhat of a lie. Imbued directly with Life Fibres, Ryuko manages to reacquire her heart and lash out at Ragyo. But we all remember how well anger benefits her.  Far from the cool, calm and collected girl who fought Nui mere moments ago, Ryuko once again becomes rash in her fury. As each slash misses, she looks to be overwhelmed by the devilish tag team of CEO and Couture, showcasing just how psychosomatic her own abilities are. Whilst her personal life crumbles, the COVERS also decide to make their move and absorb the populace of Hannouji. Utilising humanity as a battery, the COVERS unleash devastation and show just why Satsuki worked so hard to create a resistance. Which unfortunately crumbled in seconds. Not even Mako is safe as she is swallowed up and lost to the world, a moment which further expresses just how much Gamagoori cares for her as he struggles in vain to save her. However, ever the planner, Satsuki unleashes her backup plan. 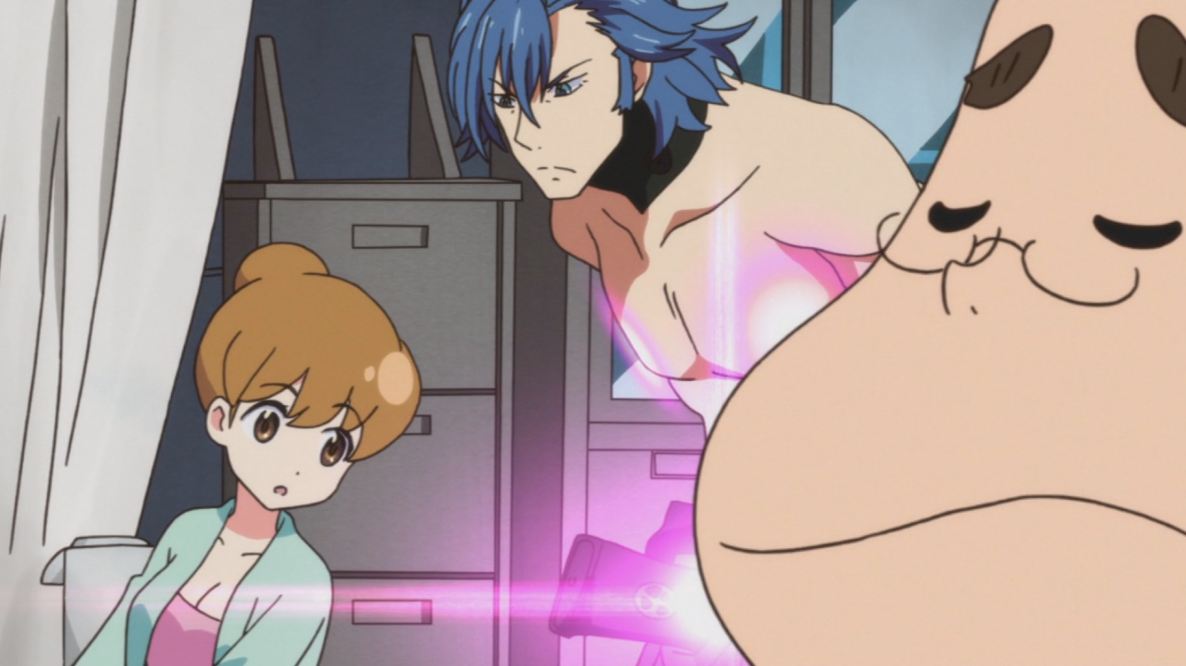 Hey Sukuyo, the plot is happening a little higher up

That’s right, hard cut to the future. It is in this time jump that the anime has inverted its premise to a degree. What began as one girl standing against a school of oppression, has become the story of humanity’s last bastion doing its best to survive against an overwhelming force. Though the Elite Four have joined forces with Nudist Beach, which is badass, humanity is still massively on the defensive. Essentially, humanity’s fate rests on the shoulders of five people. The mightiest five who carry the only weapons able to harm the COVERS. By the way, it was cool to see that Satsuki’s broken sword was reforged into two smaller blades. It was a touch of detail that, in its own weird way, expressed just how desperate humanity is, forcing them to do something sensible in such a wacky anime. Pretty meta. It was also good to see that there were no hard feelings between any of the characters. They know that any complaints they had would count for nothing against their current situation and each instead vow to do what they can to save the world. Though light bickering is still permitted. One of the most interesting moments of this team up was seeing the last Goku Uniform crumble. In the same vein as repurposing Satsuki’s blade, it showed how resources are so valuable that they are used until the bitter end. 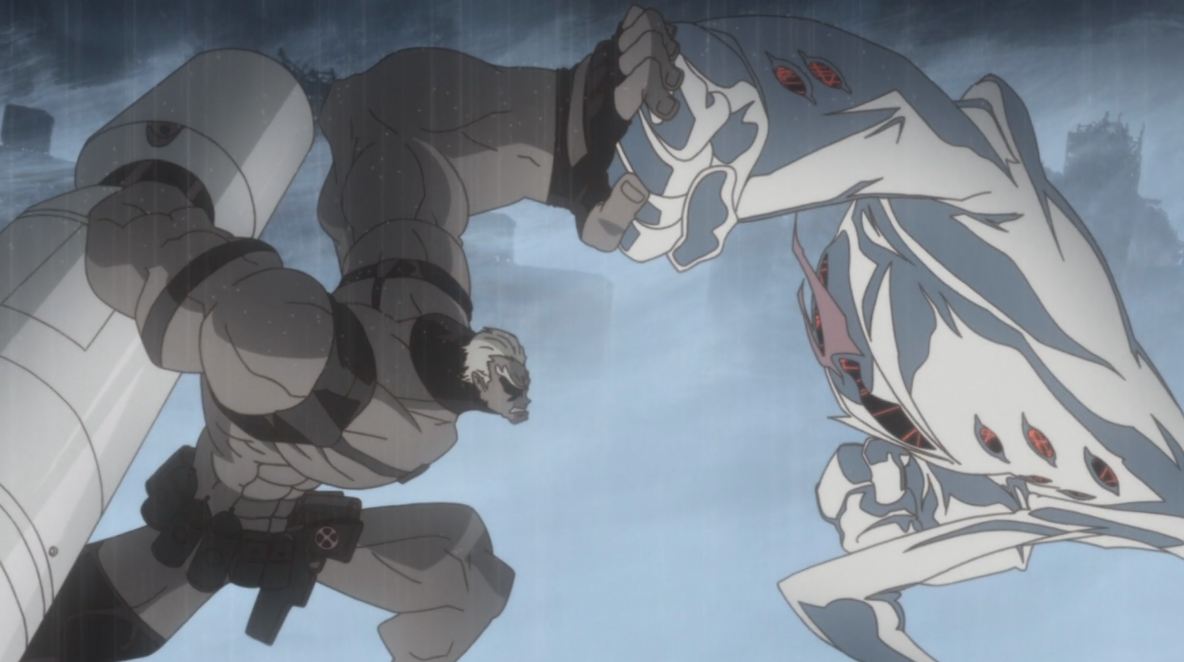 Love will make a guy do crazy things

Even Mataro nets himself some moments of badassery, if only in spoken form. Longing to save his sister, he remained in Hannouji for the past month. Just him and some other children, surviving in the most heavily COVERed area in Japan. This same devotion is shown heavily in Senketsu, who wishes for nothing more than Ryuko’s health. Having dragged her unconscious body through the explosion that threw the series a month forward, even characters unable to understand his words are able to understand his heart. Both Sukuyo (Mako’s mother) and Mikisugi relay their condolences to Senketsu, as Ryuko lays comatose beside them. Rather than explosive anger, or depression, Ryuko simply fell unconscious. If you ever needed proof that the Kanto vagabond had a fragile side, there it is. Unable to cope with the shock of Ragyo’s claims, Ryuko lies locked in thought, struggling to process the truth.

Speaking of trouble Kiryuin girls, Satsuki has apparently been hanging from chains for the last month. Never without a reason, rainbow clad mother of the year spends her hours torturing and teasing her daughter into a white hot rage. As always, her physical closeness with her daughter crosses a boundary and carries sever sexual undertones. Though more than anything this shows how Ragyo will use any means necessary to unnerve Satsuki and enforce dominion over her. Seeing her not as her daughter, but rather a puppet to be controlled as she sees fit. With this goal in mind, Ragyo explains to all of use that Isshin Matoi and Soichiro Kiryuin are one in the same. Having faked the death of Ryuko and himself, Soichiro changed his appearance and began a secondary plan to defeat COVERS. Not the world’s best father, he may have just been the best father for the world. Unfortunately, he was forced to place the burden of the future onto the shoulders of his own flesh and blood. But they turned out fine right? Sins of the father indeed… 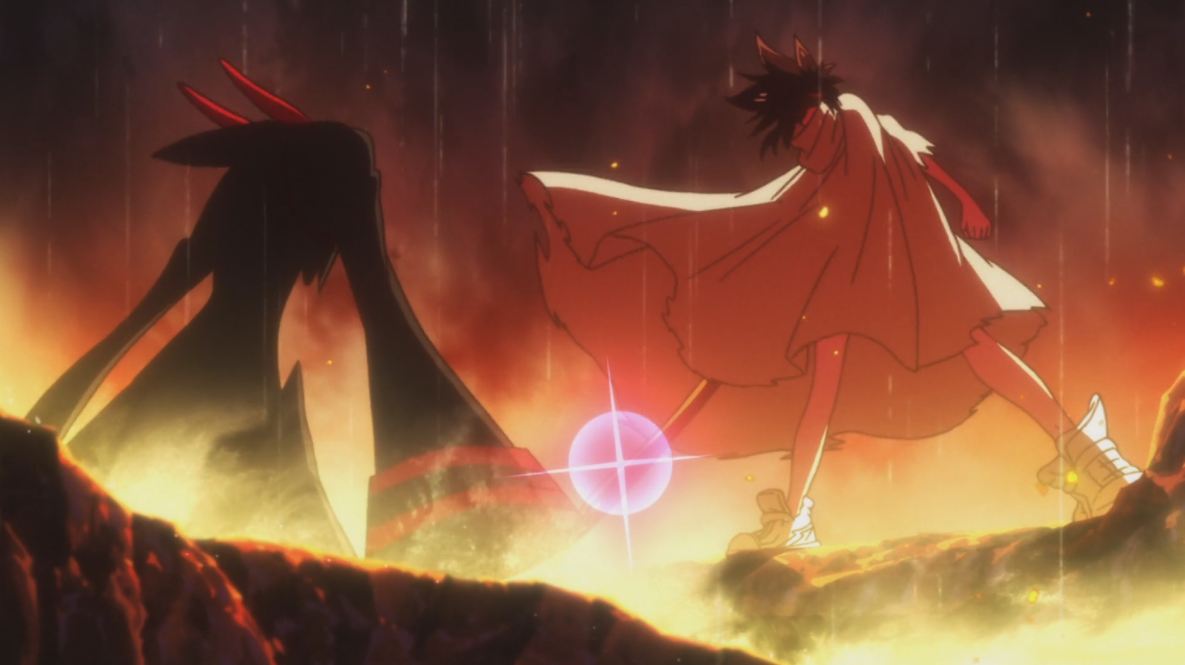 Let’s just say the truth may have had a slight impact on Ryuko. And by slight I of course mean inconceivable. As Nudist Beach struggles to defeat a force of COVERS, managing “only” to save Mako and again show how hilarious the whole Mako/Gamagoori relationship is, Ryuko awakens. And boy is she pissed. Slaughtering the COVERS and freeing the human batteries in a single blow, everyone is ecstatic to see her up and about, especially Senketsu. Unfortunately, this is not a shared emotion. Apparently mental scars aren’t as easy to heal as a torn out heart. The shock of her existence sparks the notion that she is no more than a monster, the same monster Nudist Beach feared Senketsu to be. Bred to murder her own kind. A weapon. Less than human. In her self destructive depression, her refusal to ever don Senketsu again expresses the extent of her emotions. However, her mind is just as clouded by fear as it is anger. Knowing the truth, her transformation into a mindless beast is now her fault more than ever. Perhaps she does not want to harm her friend any more than she already has? This new perspective on Ryuko also adds some depth to her previous tyrade about treating Senketsu as more than a weapon. Unknowingly, her righteous anger was indeed for her own sake. Each one of her previous feats of strength, her rapid recoveries, proficiency with a Kamui, everything we all took as simple quirks of the anime were in fact crafty little pieces of foreshadowing. Very clever…and kinda sad in hindsight. 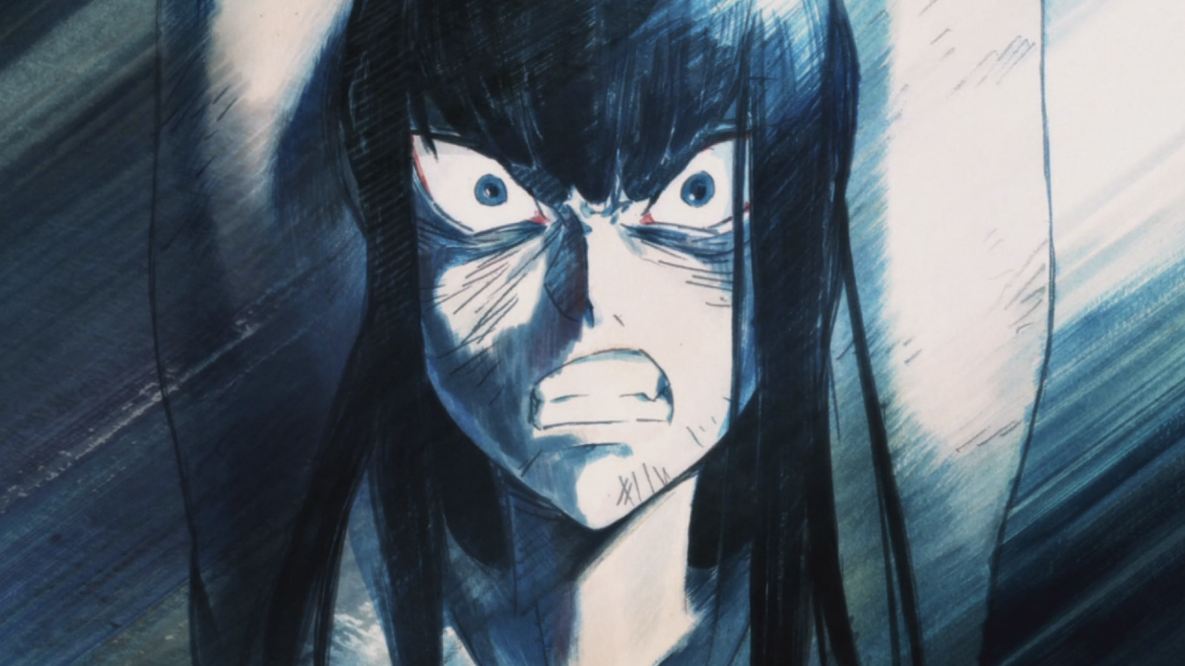 In the darkest hour, there will be a light

So with our hero now her own worst enemy, the situation just went from bleak to explosively bleak. Senketsu is disheartened, Satsuki is in chains, COVERS continue to spread and Ragyo is plotting something called an Ultimate Kamui…things are looking worse than before, quite a feat if I do say so myself. But hey, maybe if we hope hard enough a miracle will happen. A miracle by the name of Satsuki Kiryuin. Never thought I’d say that.