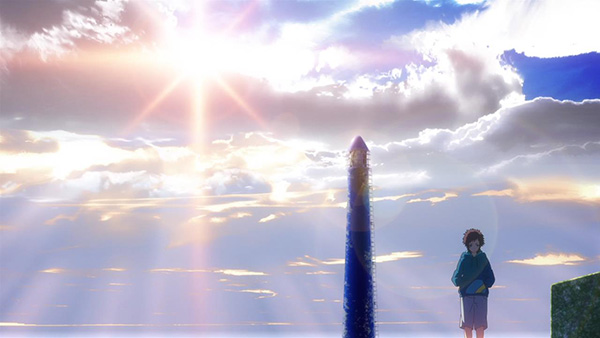 Nagi no Asukara
Episode 15 – The Protector of Smiles

Following on from the previous episode’s shocking return of Hikari, episode 15 is all about him getting the lay of the land after a five year absence while others are still coming to terms with the fact that he hasn’t changed in the slightest.

The protector of smiles. The title refers to the now-14-year old Miuna who continues to harbour feelings for Hikari and is more than a little happy now that they’re the same age. But after realising Hikari’s pain in being left behind, she says at the end of the episode that she wants to protect his smile. Rewinding for a bit, the episode begins with Hikari getting acquainted again with everyone from the surface. Everyone’s glad to see him and he seems to take the reunion very well despite the fact that to him everyone was five years younger just two days ago. 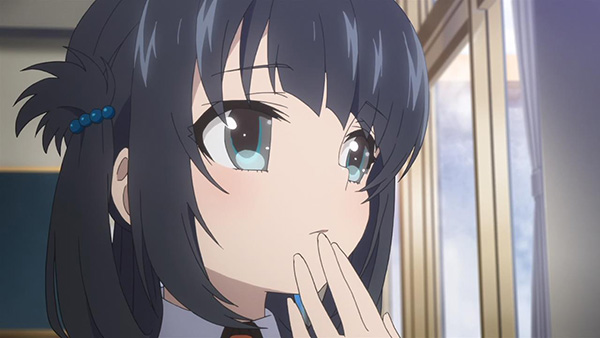 Not all is well, however, as only just two days ago Hikari lost everyone else under the sea including Manaka. The town elders showing him the flag he was waving during the Ofunehiki ceremony wasn’t a bright idea, as it makes him feel sick. While Miuna is the thoughtful voice during the episode, it is Chisaki that is taking the whole thing worse. Chisaki and Tsumugu are in no hurry to see Hikari again, as close friends separated by five years would be scared to see what’s changed.

Chisaki and Tsumugu have a moment as Tsumugu stumbles upon her undressing. She admits she’s ashamed that she has changed over the last five years, but Tsumugu is extra nice and says she has become more beautiful prompting her to burst into tears. It has been a long time since I’ve seen an anime handle tears and crying as well as Nagi no Asukara does. While there are still no romantic hints between the two, it seems like they’re incredibly close. 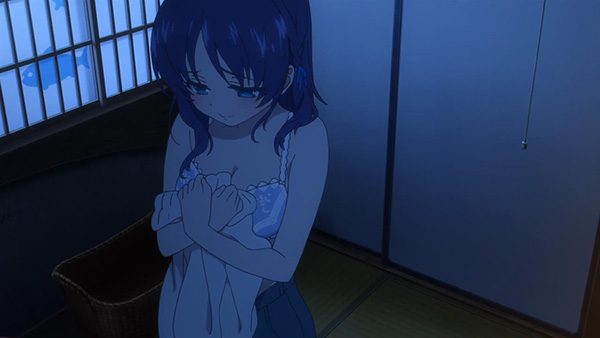 Miuna finally understands Hikari after she overhears a brief quarrel between him and Tsumugu. A fierce current prevents Hikari from revisiting Shioshishio and he ends up meeting Tsumugu on his boat. Hikari breaks down and admits he is overwhelmed with change and that he can’t stand to see anything else changed, including Chisaki.

A lovely music tune sees Chisaki and Hikari finally reunite on a hill. The awkward meeting is wonderfully directed as the two friends make light conversation. Chisaki apologises for changing so much, but Hikari breaks the ice by acting cheeky and friendly. As Chisaki breaks into tears Hikari only teases her more. Thus after five years for Chisaki, and just two days for Hikari, the old friends are just that once again, friends. 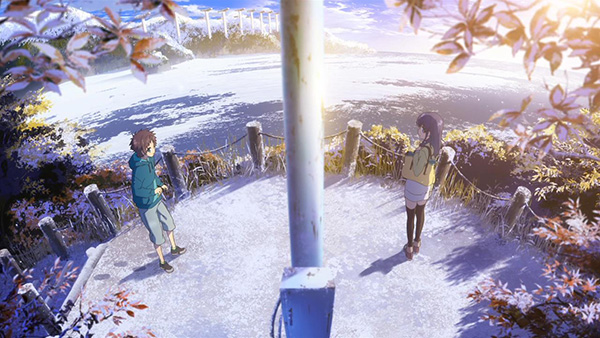 Hikari’s new resolve is to embrace all the change around him with his free-spirited character, letting loose his childish side. He does this with the best “Mr Bean” impression, pulling his eyes open with his fingers. It’s something we might think of doing when we’re trying to forcefully motivate ourselves. It really hits home just how much Hikari has matured over the course of the series, putting aside selfishness for the sake of others. Miuna re-stitches the huge flag that is now a symbol of that terrible day, and turns it into a hilarious one covered in misplaced hearts and butterflies.

The episode ends with Tsumugu meeting Chisaki, who is still rather sad and awkward, at his door and asks if she met Hikari. I’m curious to see the significance of this little scene during the next episode and why Chisaki remains so distant and sensitive. But most of all I’m more than a little excited to see just where Miuna’s relationship with Hikari leads.