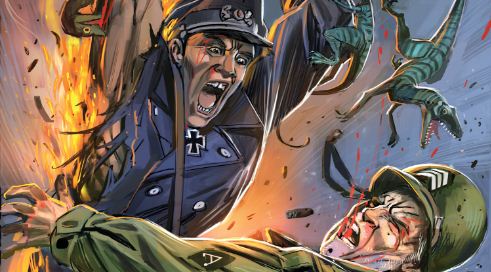 It’s had a good run up until this point but unfortunately the first part of the Chronos Commandos miniseries is coming to an end in this issues, that’s OK though because it is going out with a bang! Everything has been leading up to this point in time; Sarge and Richter brawl over the stolen Chronosphere Core as two Einsteins frantically work their “magic” as they try their darnedest to fix the overheating Time Reactor. Reality itself is about to collapse and it seems as though Sarge may not make it back home.

Twists and turns will come from left and right as this crazy comic skids across the finish line and, fortunately for you, we have some preview images for you all to take a gander at before you pick up the comic itself.  Chronos Commandos is a comic written and illustrated by Stuart Jennet (Published by Titan Comics) and Issue 5 is set for a release on the 13th of November 2013 for $3.99 at all good comic book stores.