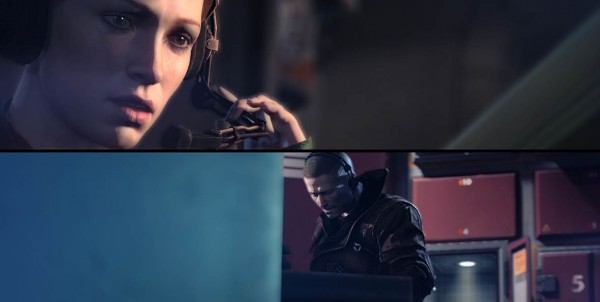 William ‘B.J.’ Blaskowicz is back and he’s crazy as ever! Literally… although comatose (a big although), he’s been in a mental asylum for 14 years for Christ’s sake! Or shall I say Hitler’s sake, for when he breaks out in 1960 and re-enters civilisation, he finds that the Nazi forces have won the war and are in total control. Do you think the former Captain would stand for this? Hell no!

At Bethesda‘s booth on the EB Games expo 2013 show floor, we were treated to a hands-off demo of the upcoming ninth entry in the long-standing, genre-defining franchise that – you may have ascertained – presents an alternate timeline. Being developed by MachineGames – a new studio owned by Zenimax and made up of former Starbreeze developers – Wolfenstein: The New Order utilises the id Tech 5 engine and seems at first to be a very basic shooter, although we are assured that there will be substantial variety in this single-player only experience. Nonetheless, just because it might be basic, doesn’t mean it can’t be satisfying. 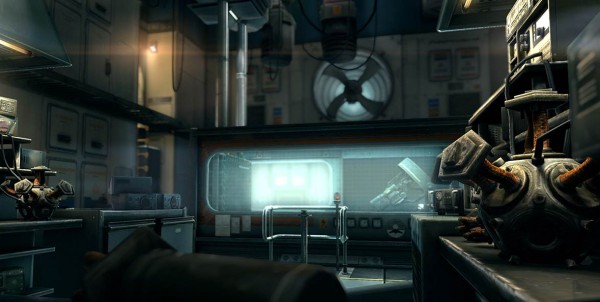 B.J. has found his way onto a secret nazi base…okay, by “found”, I mean a driver sacrificed his life by crashing his vehicle into the side of the facility, allowing B.J. a decidedly ostentatious entrance. Soldiers swarm on the brash and patriotic warrior, who brutally guns them down. While we couldn’t get out hands on the game, it is immediately clear just how impactful and heavy the guns are. The decibel count on those bad boys is high; I mean these weapons are loud! And huge! B.J. doesn’t mess around… and neither do the Nazis, who have large mechs at their disposal.

Wolfenstein: The New Order is an old school shooter, which is probably the absolute best, most succinct way to class it. It’s essence is in line with the soul of the genre, which is simply killing bad guys. Nothing too fancy here, although there are a few newer elements that have implemented. Of note is the laser cutter, which can be used two different ways: as an offensive weapon, and as a tool. While you can certainly fry the Third Reich baddies like bacon, its the laser cutter’s functionality as a puzzle solver that is most intriguing. Not only is it useful for specific moments where something needs to be cut or unlinked, but it can also be used for more impromptu purposes… 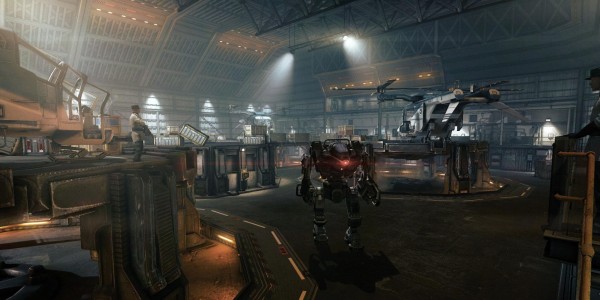 Need to be stealthy, but don’t want to risk leaving the comfort of your cover? Laser a hole into your current cover and shoot through it! Don’t want to waste ammo, but are too curious to leave that crate untouched? Laser a hole in it and find that you were right! Grab that health pack! Wood, metal… the laser cutter can burn through most materials, and in any shape your artistic heart desires. It’s a very cool mechanic that definitely adds a little freshness to proceedings. It’s also good for finding hidden pathways and possibly collectibles. One cool usage for the laser was cutting through the breaks of an elevator while standing on the counterweight, which whips B.J. upwards at breakneck speed. It will need to be charged at battery bays, so you will have to be wary of its ammo level.

Advancing through the facility and discovering that Nazi’s landed on the moon, B.J. spouts one of the most ridiculous lines ever recorded: “They sent nazi’s to the moon? Fuck you moon!”. That should give you a solid idea of the pulpy tone found within. Is this the sort of stable man who should be dual-wielding powerful shotguns? Should anyone? They literally blot out half of the screen and demolish everything in their path. If I was a nazi, I would run. I’d also secure my experimental weaponry more tightly, as B.J. comes across an advanced version of his laser cutter called the laser kraftwerk. 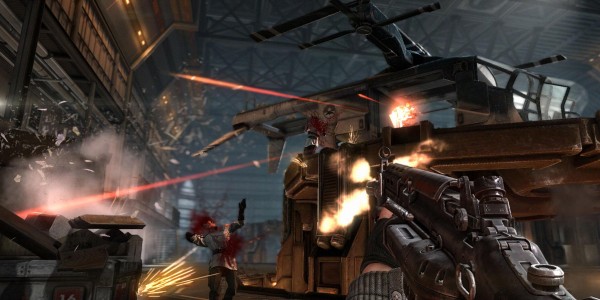 Acquiring the above-mentioned laser kraftwerk requires a mini-puzzle solution, as you can operate the stationary gun, but a blast door absorbs the laserbeam and nothing happens. You have to climb the encasement, laser through the chains holding the blast door – resulting in it falling to the ground with a big thud – operate the gun again, wait out the giant, gaping, circular hole it makes in the glass wall and you can then detach it. The comparatively puny laser cutter is then discarded by B.J., who says gruffly, and plainly, “No!” as he does so. As an aside, as he leaves the area, I noticed a notification popping up saying that concept art of the zone had been unlocked.

In the final coup de gras for the demonstration, B.J. enters a hangar area, stealthily stabs a nazi and then goes to town with his “two of a kind” shotguns, rifles and more. Wolfenstein: The New Order is visceral, and the whole laser mechanic is a refreshing inclusion. It is scheduled for release sometime in 2014 for the Xbox One, Xbox 360, PlayStation 4, PlayStation 3 and PC. And with Zenimax opening up an office in Sydney, hopefully next year Bethesda’s presence and impact at the annual EB Games Expo will be even greater.