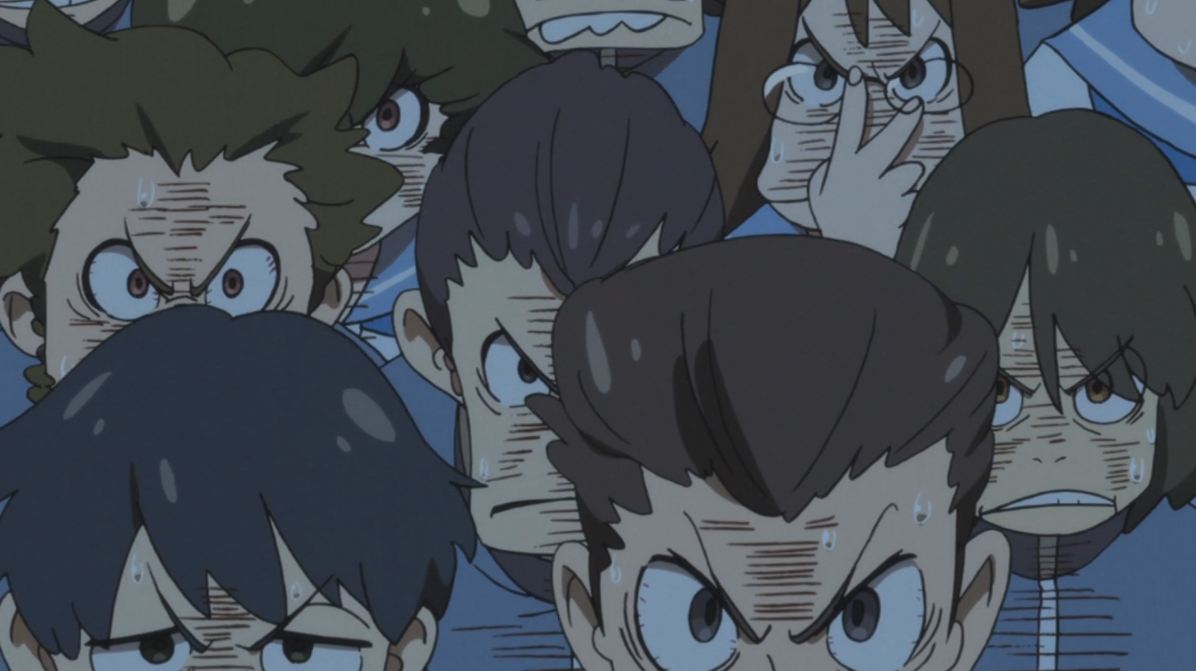 So it’s been established by this point that Kill la Kill is insane. We’ve got super powered fabric, a school following a totalitarian regime and students who accept all of this in their daily lives…also there’s a dog in a hoodie. Well my friends, Episode 4 takes the cake and throws it straight into Ryuko’s face, diverging a little from the previous episode in it’s most over the top, insanity driven story yet. Can you survive?

We all know that being late to class is a bad thing. Not only do you miss out on that precious knowledge, but you also interrupt the class and people ask you why you were late. It’s a whole thing. So, naturally, in a school where everything is turned up way past eleven, tardiness carries a little more weight to it. In what is known as “No-Late Day” the No-Star students of Honnouji Academy must put their school life on the line and make it to school before the bell rings. Being the sadistic people they are, Satsuki’s lackeys lace the entire city with a plethora of traps to whittle down the pack of poor students. Imagine a theme park, only with a lot more spikes…and crocodiles. 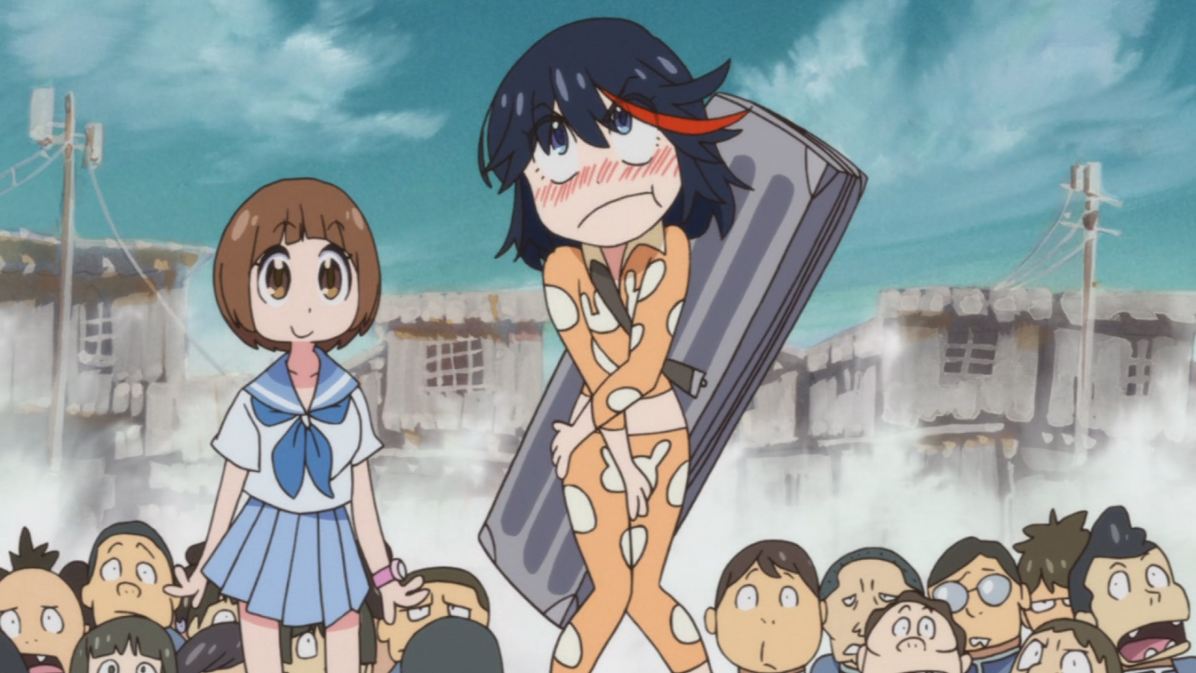 Still, it’s not the most embarrassing thing she’s worn

As if matters weren’t bad enough, Mako’s mother has decided on this morning, at 4am mind you, to wash Senketsu. Ryuko is naturally panicked at this revelation, as Senketsu prays for help as he is wrung, batted and ironed…though he finds the last one kind of nice. Deciding that her pyjamas are good enough, Mako drags Ryuko into the mass of students, beginning their perilous journey. This episode does a great job of showing just how over the top the series is whilst also providing information about what is considered the norm for the poor students. As ridiculous as all of the traps are, they show just how sadistic the higher starred students are, turning a simple trip to school into a no holds barred game show from hell. Not only that, it also show just how much control they have over the entirety of the city, transforming the streets into walkways of drill and tigers without any repercussions. Satsuki is one damn powerful student president. 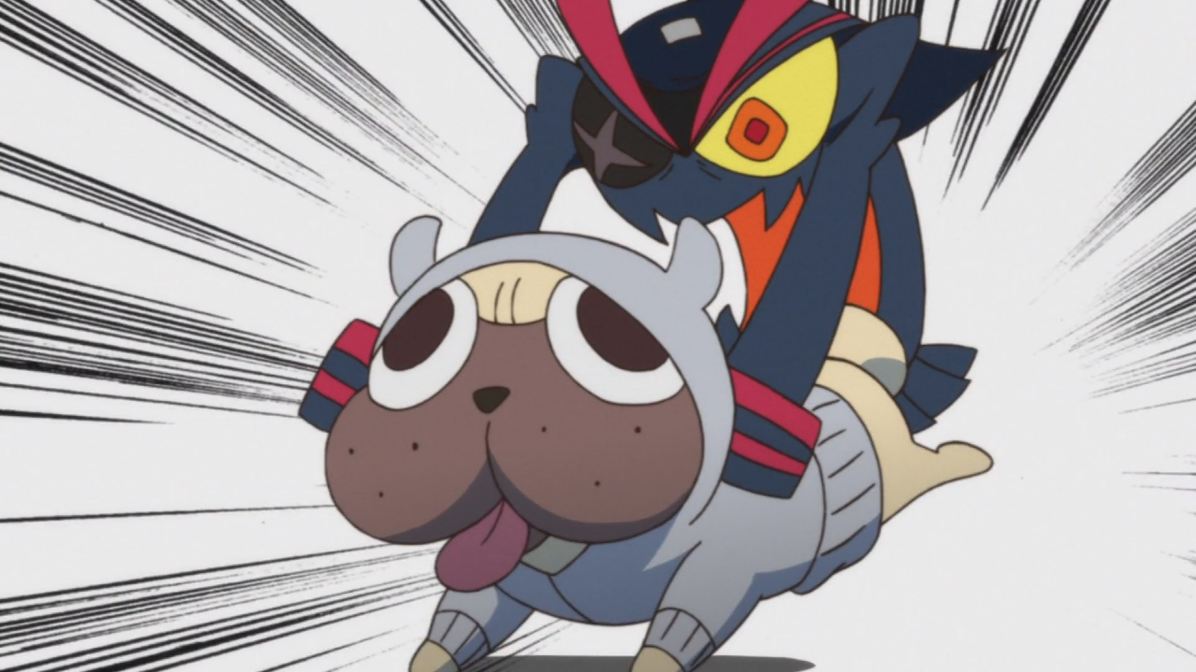 The only way to travel

After picking up fellow student Maiko Ogure, who injured her arm in the trials, the three girls proceed through all manner of traps, tricks and obstacles. Alongside this, Mako’s father and brother, along with Guts, attempt to deliver Senkestu to Ryuko. Sounds simple enough right? Nope. Due to some accidental…slippage, Ryuko’s pants ride a little lower than they should whenever Mako’s family gets close. Being the anime guys the are, they naturally become distracted and ram into a wall at 60km/h…so yeah. Duty to deliver said uniform is passed from father, to son, to dog as their wandering eyes put them out of commission. Typical anime stuff.

This episode also shows us a little more of Senketsu as a character and not just a powerful piece of clothing. He is a lot more animated than he has been before and presents a more comedic character, playing the straight man amidst the chaos as Ryuko does. It is also revealed that Senkestsu can be awake in his regular mode and that only Ryuko can hear him when he speaks. After some events which I will leave unspoiled, though I’m sure you’ll guess watching the episode, Senketsu notes how he specifically likes Ryuko’s blood. 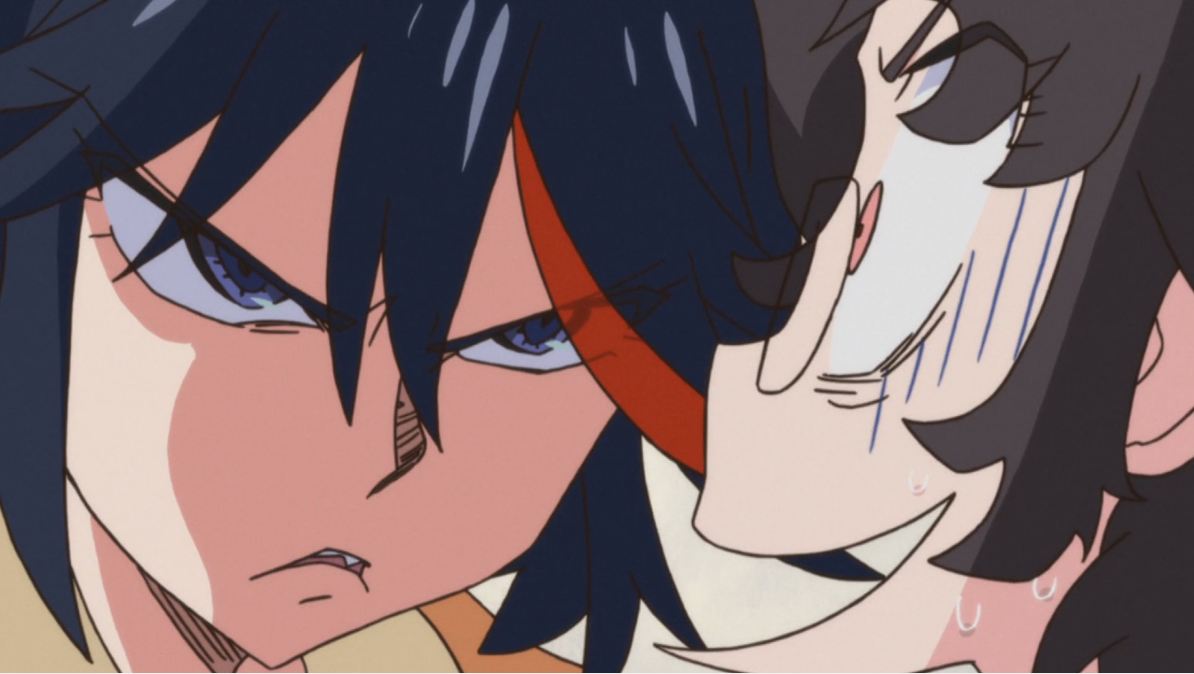 Everybody has their limits

Overall, Episode 4 followed a style closer to Panty and Stocking than Gurren Lagann. Throughout the entirety of the episode, the characters are presented in chibi forms of varying detail, immediately letting you know that this isn’t going to be a serious story…well, a less serious story than usual. The visual style of the episode imbues humour into every scene, even when things get intense. Though those moments are few and far between this episode. This is also definitely a tale where Mako is in her element, smiling through the number of dangerous trials and continuing to be cute and oblivious. So sit back and relax as Kill la Kill takes you on a journey of trickery, insanity and deus ex machinas. By this point do you really expect anything else?

Did You See It? Pulp Fiction Cameo In Kill La Kill 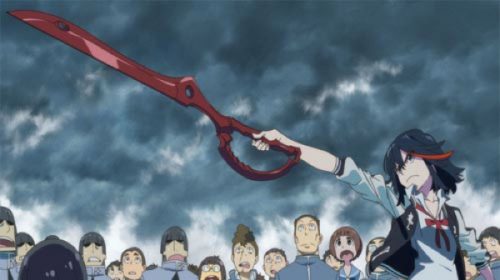