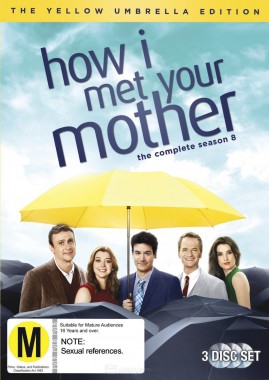 “It’s going to be legend – wait for it – dary!” They made me type that… I’m sorry. Who’s they? I have no idea. Anyway, the eighth season of the Emmy-award winning series How I Met Your Mother will be available on DVD November 6 from 20th Century Fox Home Entertainment. Get your yellow umbrella ready.

For a RRP of $44.95, all 23 hilarious episodes – featuring guest stars like Paul Shaffer, Ralph Macchio and Kyle MacLachlan – are included in the 3 disc set, which is also packed with special features that take you behind-the-scenes of the show. The full list of extras can be seen below.

The Mother From How I Met Your Mother Revealed