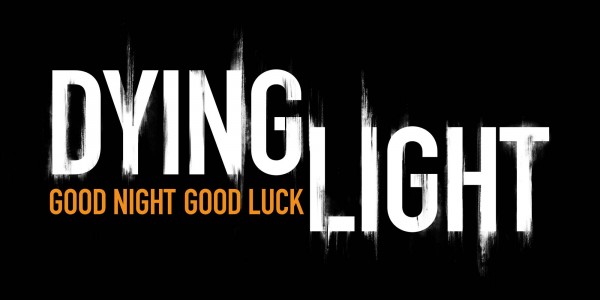 Prior to the EB Games Expo 2013, Warner Bros. invited members of the media to get a closer, more intimate look at their showcase of titles coming out in the next year, with developers from Techland, WB Games Montreal (check out our hands-on with Batman: Arkham Origins) and Avalanche Studios present. One of the more anticipated games on show was Dying Light, created by the former. Before being made available for hands-on time, we cycled through in groups and sat in on a closed doors demonstration, followed by a quick Q&A.

The gentlemen from the Polish studio walked us through the Xbox 360 demo, which looked stunning. Dying Light is definitely pushing the limits of what current-gen hardware can do graphically. Gameplay began with the player character – one of four to choose from, whom sounds Italian and used “merde” (plural for ‘crap’) in a sentence – in a previously unseen section of the fictional setting – the city of Harran – for which vacation billboards can be spotted peppered throughout. Harran has naturally been quarantined due to the outbreak, and the player character will discover clues over the course of the campaign that reveal more about the location’s history. The immediate zone shown acts as a survivor base-camp, and an ally named Spike delivers the objective of venturing out to arm traps on the courier’s path to the base-camp. 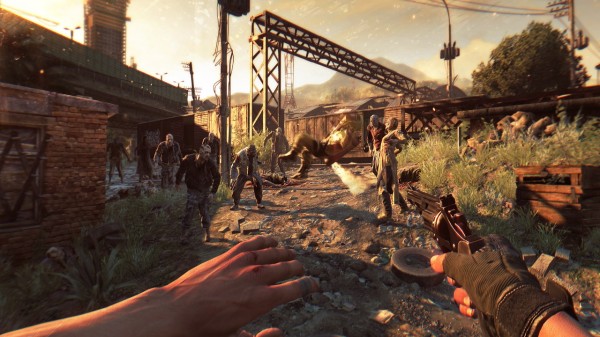 An Exclusive Screen From the WB Showcase

Along the way, the player must flip breaker switches to electrify fences, rig car alarms to draw zombies in before discharging and blasting them away, and turn on the lights in the vicinity, which will become a vital tool in the nighttime, disorienting the beasties. These traps are integral survival elements in Dying Light, and can be detonated with the press of a button, whether planted by your or someone else, so long as you are near enough. Of course, it’s never this easy… when tackling the final task, the local power generator shorts and the extra trek to find and restart said generator means braving sunset and beyond on the journey back to base-camp.

In Dying Light, you truly do not want to get caught out in the dark. The music ramps up to a high-adrenaline pace as zombies literally transform, becoming more aggressive, agile, fast and aware. The game takes on its own transformation as night falls, from an action-heavy, objective-based experience, to a stealthy (if you’re skilled enough), survival-horror scramble. Your advantage of being quicker, more intelligent and of higher sensory capacity goes out the window. In this particular demo, the player gets spotted quite early in the evening and makes a mad dash towards base-camp, all the while setting of the above-mentioned traps and looking bad to admire the carnage. 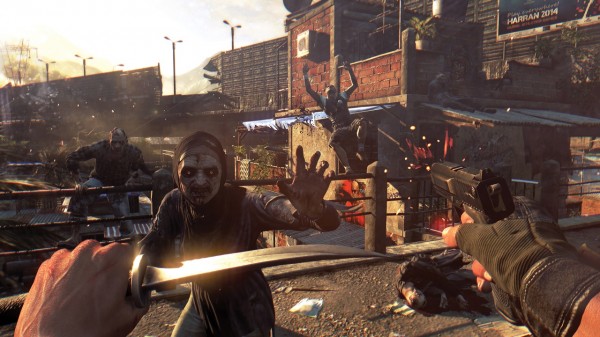 We asked whether that cinematic 180° turn mid-run (you may have seen this in footage released so far) was player controlled and it is – press the ‘Y’ button to initiate and you can even throw knives and more from this perspective. Important to note, while all of this is going on, is the split-stamina bars midscreen. Stamina – in comparison to Dead Island, for instance – now pertains to separate abilities: fighting and running. As a free-runner, you wouldn’t want to expend all your energy escaping a gritty situation only to find yourself face-to-face with another horde, and unable to swing your weapon due to fatigue. So now, they are governed individually, which the developers admit may not be the most realistic approach, but makes more sense for the sake of fun gameplay.

We also witnessed a random encounter at one stage; a man was stranded within a hut surrounded by the ferocious brain-eaters. Engaging these instances is absolutely optional, and each have variable results, but will reward the player with Status – which enables access to new missions, parts, etc., and will be detailed at a later date – and, of course, XP that adds to your skill ranking. Here, our demonstrator chose to throw some firecrackers into a nearby pool of oil, the ensuing flames of which lured the zombies like moths and burned them to a crisp (firecrackers are ordinarily used a aural distraction). What’s especially cool about these events is that they are dependent on your current health and weapon grade, so they are essentially tailored to your experience level. 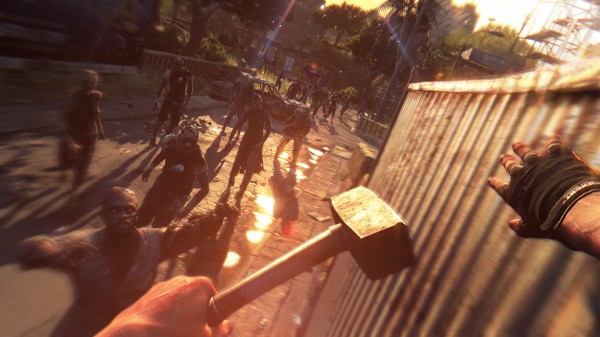 We were told that practically 95% of missions can be taken on your own accord, when you want, and you very rarely have to actually kill a zombie to proceed. Taking on missions in the nighttime also grants extra bonuses and XP in respect of the heightened challenge. There are hundreds of weapons to be found, bought or crafted, and each has a different feel. Numerous zombie types will be included, with a few rearing their ugly mugs in this play-through. A boomer-like zombie was randomly roaming the rooftops, and multiple Hazmat suit-wearing zombies walked the streets. Shooting the pure-oxygen tanks strapped to their backs sees them at the mercy of the leaking, highly-pressurised gas that propels them violently before exploding in gruesome fashion.

Other notes from the Q&A: player movement is important with such focus on parkour elements, and so a dodging system that uses the right thumbstick for directionals and ‘A’ (the jump button) combined to dash has been implemented. Also, unlike a traditional skill-tree which is connected, skills can be unlocked independent from one another. Four player drop-in, drop-out co-op will be available in the final release, and an online mode where you can play as a zombie, invading other people’s games was also confirmed. Your zombie will build up unique XP points that allow the upgrading of special zombie-specific traits and abilities. 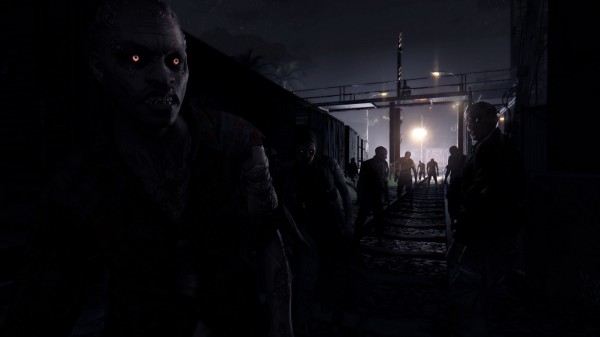 Continuing on with further answering, the guys from Techland stated that certain QA (quality assurance) members of the team are dedicated to repeatedly playing through the builds in one specific play-style to ensure balance across the board. We enquired about the human factions present in-game, to which the devs explained that not everyone you meet will be friendly survivalists like you, and when the time comes, these men will prove worthy opponents, using ambush/flanking tactics, advanced weaponry and will be able to block your hand-to-hand attacks. All up, from everything we saw and were told, Dying Light is looking fantastic.

We will share an in-depth hands-on preview of an entirely new section of gameplay from the EB Games Expo 2013 event itself in the coming days, so stay tuned to Capsule Computers for more on Dying Light, due for release on Xbox 360, PS3, Xbox One, PS4 and PC in 2014.

You’ll be Dying for this Dying Light Collector’s Edition 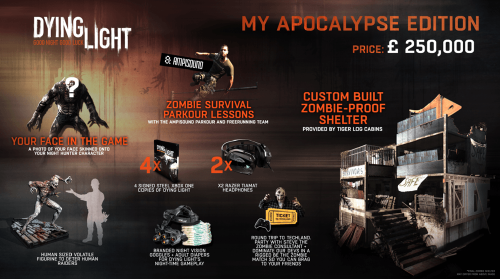