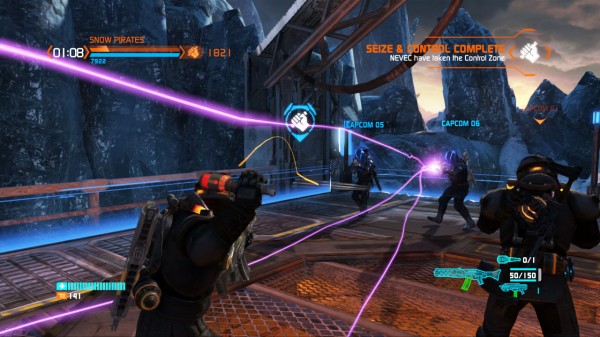 A little more than two weeks after England got their limey mitts on Lost Planet 3‘s multiplayer suite (they won’t see this as they’re still celebrating Andy Murray’s Wimbledon win), we here at Capsule Computers got our own time with the four multiplayer modes of Capcom‘s upcoming prequel.

I spent a couple hours playing multiple matches of each game type: Team Deathmatch, Scenario, Akrid Survival and Extraction. Playing system linked across eight consoles, we started our session with the tried and true Team Deathmatch. This plays out as you would expect, with a kill goal that you must attempt to reach within the given time limit. We were split – as was the case in every mode – into teams of NEVEC Soldiers (ironically adopting the generally ‘force for good’ blue) and Snow Pirates (identified in orange). Before each match, you can customise your Weapon Kit and Character choice. 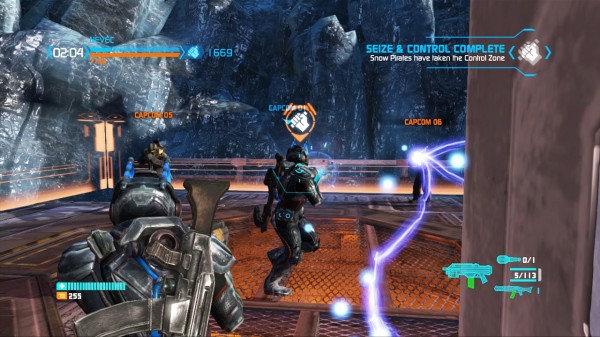 There are four base Weapon Kits to choose from, each attuned to a specific play-style, such as the archetypal support or assault character type. However, the great thing here is that they are extremely customisable, giving you the ability to change every aspect of the load-out. They therefore become four slots for your own personalised preferences, and are in no way set-in-stone options for how to play. I personally liked the first pre-set Kit, consisting of slightly futurist versions of an assault rifle and crossbow, but made a change to one of the two abilities, replacing the default selection with Survivor – a trait that enables faster health regeneration.

One of the first things I noticed was the character’s inability to climb walls, no matter how manageable they should be. Waist high cover they can vault over, but for anything taller, they’d much rather use their handy grapple hook, which is a tool synonymous with the series. There’s a good sense of functional verticality in these maps, and the action can get frantic, so it definitely becomes useful to just tap ‘LB’ (we played on Xbox 360’s) and zip out of the fire and maybe into a good strategic position. Each player has their own gadgets as well, which can be deployed with the left and right button the D-Pad. The automated turret is probably the most favoured, and for good reason; they are a pain to destroy! 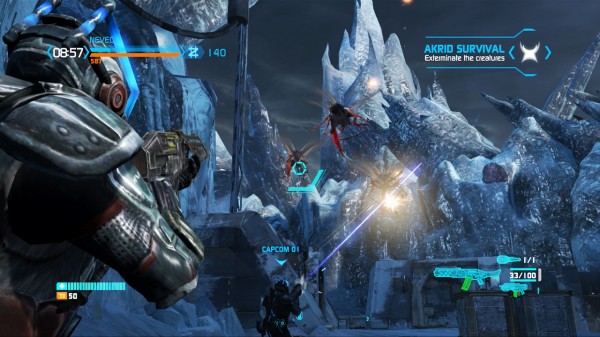 It was during our inaugural Team Deathmatch that we discovered that when you are dying, you have more options than you’d expect: you can button mash ‘B’ to hold out for a (hopefully) nearby buddy who can then revive you, “tap out” with ‘X’ to just accept the death, and in many cases steal away the satisfaction of an enemy finishing you with a curb stomp (ala Gears of War), or press ‘Y’ to release a deadly, toxic gas that will quickly suffocate any opposition in the vicinity. That functionality is an ability much like the above-mentioned Survivor, and is called Noxious Demise. That’ll teach ’em not to respect the dead!

Scenario Mode alternates in tasking teams with achieving a series of objectives, with the opposing team simply trying to halt their progress; offence versus defence. Though there are 5 game-types within this mode – Plant/Defuse Bomb, Escort, Courier/CTF, Seize/Control and Disable/Repair – we only truly indulged in Courier/CTF and Seize/Control. Courier requires you to obtain canisters of Pure T-Energy and deliver them to a drop-off point, hence the CTF designation. Seize/Control is reminiscent of King of the Hill in that you must successively enter and hold an area for a period of time until it becomes under your control, with a total of three for each map. 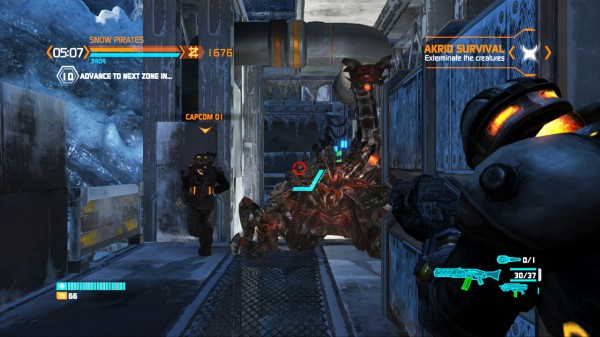 Specifically, and dependent on the map, Seize/Control can be very tough to succeed at, but in a good way that tests your skill and strategic thinking. In our case, having the opposition occupy the targeted space, setting up turrets and sniping from its cover to keep us at bay was challenging, but there is a hole in the ground level that can be utilised to sneak through or throw grenades into to flush them out. We wish we could have sampled all that Scenario Mode had to offer, but what we did play was well varied as it was, which is a great sign for the full-featured retail version and its level of content.

Next we tackled Akrid Survival, which is a take on the popularised Horde Mode (another Gears reference!), except with a twist. This game-type is comprised of two stages: first, the namesake, where you earn T-Energy from eradicating the map of two waves of Akrid, and then a PvP round against the other group of 3 players who have been doing the same thing on the opposite side of the map. The difficulty of the A.I. Akrid will ramp up as waves pass, but also depending on which map you are on of the 6 available. Spitters, for example, will only appear on certain maps and so theoretically, there is a unique difficulty level that can be attributed to specific maps. 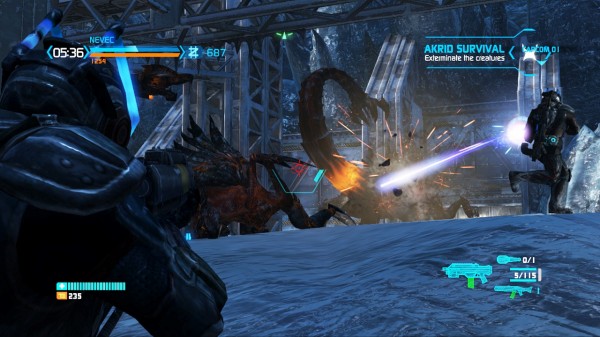 Finally we got into Extraction, which pits teams of up to 5 against each other as they endeavour to plant and protect their T-Posts, which extract T-Energy from well-springs of the orange goo. Basically, these hotspots will be identified on the map and have a finite amount of the energy source to be extracted. Once it has been depleted, a new location is specified. This continues until time runs out, and the team with the highest score (most T-ENG) wins. Vital Suits (those large mechs) can be piloted when found and aid in your defensive line against usurpers attempting to destroy your post and plant their own. This mode feels like a scramble at times, but is a lot of fun.

And that concluded our play session. All unlockable bonuses, weaponry, skins, etc., were unlocked from the beginning for the purpose of giving us the best taste of the suite possible. In the final release, your individual points earned translate into credits which you can then spend on these attributes, weapons and more from the Progression Sphere – a neat hexagonal unlock system that also includes unlockables granted by completing certain challenges. All in all, the multiplayer was a lot of fun and very competitive amongst us in attendance. We already gave our single-player impressions, and hope people give Lost Planet 3 a chance. It has, so far, shaped up to be a significant package content-wise and a massive improvement upon the last entrant in the series.