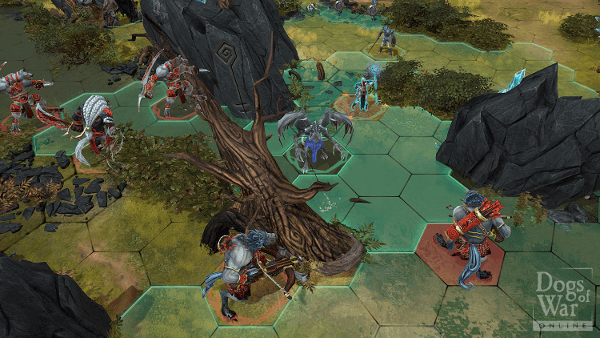 Quickly doing the rounds in preparation for this article of my table top gamer friends brought tears of joy at the news of an imminent free-to-play ‘Dogs of War’ video game. The ‘Confrontation’ universe was a fan favourite due to their amazing models and its intuitive yet deep game play mechanic. This game is far more true to the table top form than the previous video game iteration from this universe, ‘Confrontation;’ minus pulling out rulers at the end of every turn that is.

This universe knows no concept such as honour. Each class is only interested in self aggrandisement, pleasures of the flesh and material wealth. You’re going to have to make sure that your units are occupied by missions between battles so they don’t run off to pillage and plunder between battles. Individual units themselves may start fights with each other, steal or even desert your squad if you don’t employ some solid leadership skills.

You will have to hand pick all of your units, unlocking new dudes as well as items as you progress through your battles (you’ll most likely be able to buy your way through this step, as it is a free-to-play game after all). Battles take place in a turn based fashion on a system of hexagonal boxes.

Each of the three classes have their own unique narratives. The Ram are a unrelenting hoard of the undead, the Lion who appear to be noble knights are renowned for their greed and the Wolfen are predators who’ll hunt anything for game.

Get ready for battle in Q2 of this year, it’s going to be brutal.