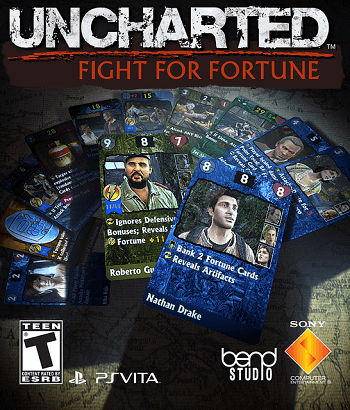 Or who knows, maybe you did ask for it? Well, either way, Sony has chosen that the next step for the Uncharted franchise is a card based game for the PlayStation Vita. Now don’t worry too heavily over this one, as it is not a full retail title. To be a bit more specific, Sony Bend revealed today that Uncharted: Fight for Fortune will be released as a digital download on December 4th for a price tag of only $4.99.

Fight for Fortune will feature card-based combat with various hero, villains, mercenaries and artifacts from the series taking the form of cards. If you are curious about how this could possibly work then you should check out the below trailer which will show off how some of the game is played. It is worth noting that anyone who has played Uncharted: Golden Abyss will be able to use any gold they have in that game to help them fight in the card game. So… with Sony pushing a card game out on the Vita, perhaps we should hold out some hope for Compile Heart’s Monster Monpiece?