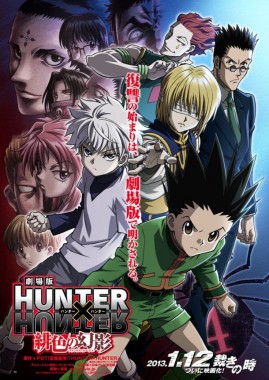 Ever since the Hunter x Hunter: Phantom Rouge film was announced there has been a lot of confusion surrounding the film, so I see it fit to round up everything that we know about the film thus far in one nice little package for all of you Hunter x Hunter fans out there. For those of you who do not like spoilers, do not read on. You have been warned.

First of all the film will be an alternate version of the York New City story arc, which Yoshihiro Togashi penned himself over 10 years ago when originally writing the York New arc. The manuscript of this film ultimately went unreleased and he went a very different way with the manga. Due to the fact that the film is an adaptation of Togashi’s original manuscript it is being considered canonical to the world of Hunter x Hunter similarly to how Strong World was to One Piece.

The film follows an alternate reality of the York New arc in which Kurapika has his eyes stolen. In this alternate version Hisoka does not appear to be associated with the Phantom Troupe instead the original 4th spider is still alive and well, in comparison to the manga version in which he was killed and replaced by Hisoka in order to infiltrate the Troupe.

The 4th spider is named Omokage, he features a distinctive gothic archaic appearance (see below in the image gallery) and his spider tattoo is on the palm of his right hand. He is set to be the major antagonist of the film and is said to have a strong connection to the Kurta Clan massacre.

Other characters to be featured in the film are Kurapika’s childhood friend Pairo. Kurapika had long thought Pairo to have been murdered during the infamous Kurta Clan massacre. However in the alternate reality of the Hunter x Hunter: Phantom Rouge film, Pairo is shown to be alive and kicking and seems to even have a score to settle with Kurapika (the trailer for the film shows them in the midst of combat). The final new character is a mysterious puppeteer that Gon and Killua befriend that will be voiced by Aya Hirano.

The most comprehensive trailer to date shows several scenes of great importance, such as Killua fighting Uvogin, Kurapika’s nen not working, Pairo and Kurapika fighting one another and also riding on a large chicken (which is featured on volume 4’s cover), Nobunaga seemingly protecting Gon and an interesting scene of Leorio and Pairo running down the side of a cliff. You can check out the trailer below.

Also confirmed is the film’s theme song (which is also scheduled to be the new ending theme for the anime series) will be ‘REASON’ by J-Pop folk duo YUZU. A short snippet of the song can be heard in the latest trailer for the film which aired during a variety show on NTV, the channel which airs the anime series. You can listen to a portion of ‘REASON’ by YUZU in the trailer below.

Hunter x Hunter: Phantom Rouge is slated to premiere in theaters across Japan on January 12th, 2013. The manga is expected to return around this time but no official confirmation has been made. You can visit the official website of Hunter x Hunter: Phantom Rouge here for more information. Be sure to check out the image gallery below for a look at what to expect from the film and let us know what you think in the comments section.