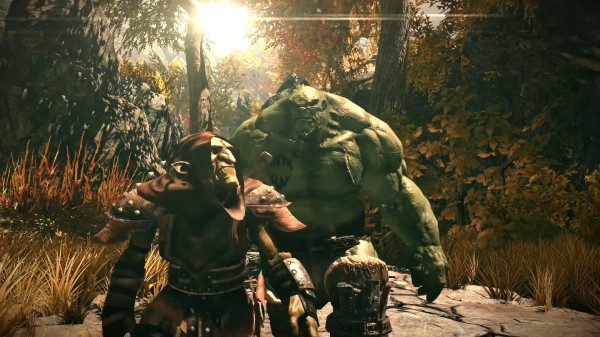 When two unlikely forces team up, you normally hear them bash each other quite regularly in good fun. Take for instance, Marvel’s Avengers that recently came out on Blue-ray and DVD. Thor, Captain American, Iron Man, and even the Hulk take shots at one another but eventually they pull out all the stops to become one hell of a team. That is basically the trials and tribulations that the characters Styx (goblin) and Arkaïl (orc) go through in their journey to rebellion.

In the following “Buddy Trailer”, listen close as Styx and Arkaïl build their bond with each other as they use their unique skills to take down foes but more importantly protect each other. In a week’s time Of Orcs and Men will be released on October 11th for Xbox 360, PS3, and PC. Additionally, there will be a digital download available for those that want to play as soon as the game launches. Find out more about purchasable options (here).

Of Orcs and Men – An E3 Trailer