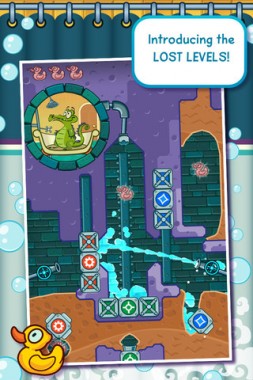 Disney celebrated the one year anniversary of their hit game Where’s My Water? this past September 22nd. To kick off the celebrations, Disney has pushed out a major update to the game adding new levels and a very special Make a Wish level that lets Swampy blow out the candle on his birthday cake. To continue the celebrations, Disney compiled an impressive infographic on the Where’s My Water? series full of interesting facts and character art.

In the past year, Disney has grown the Where’s My Water? franchise to two mobile games with separate free editions. The franchise is expanding to include to a 12 episode animated web series and a merchandise land including plushies. The original Where’s My Water? can be purchased for iOS here and Android here. The follow up featuring Perry from Phineas and Ferb can be purchased for iOS here. Both titles are priced at $0.99.

Where’s My Perry? Released on iOS and Android