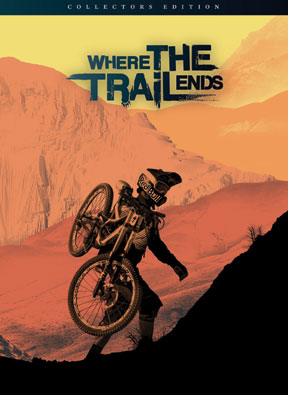 Following on from a live streamed world premiere this week, freeride mountain bike movie Where The Trail Ends has just been released to the masses on Blu Ray, DVD and for download via iTunes. The movie follows a select group of some of the world’s top freeriders as they take on some of the more extreme environments that the planet has to offer.

Marking the release of the movie is a new clip featuring Darren Berrecloth, one of the riders featured in the film. In the clip below Berrecloth narrates his own state of mind during a 360 spin in unknown territory. The slow motion action, combined with his concern about the distance to hospitals, make for a rather exciting combination.

The Blu Ray version of the film is fully mastered in 7.1 surround sound using Dolby True HD, definitely ready to go on a home cinema system. Die hards can also try and get their hands on one of only three thousand copies of the limited edition release of the film, which comes complete with a making of journal, a copy of the film on all three formats, and a few surprises to boot.

Where the Trail Ends on iTunes

Where the Trail Ends Limited Edition

Watch the World Premiere of Where The Trail Ends