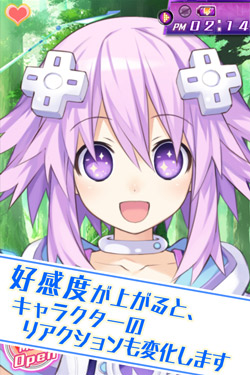 Today is a big day for Neptunia fans, because not only has NIS America announced that they will be localizing Hyperdimension Neptunia Victory, but they are also going to be bringing a certain little iPhone app over to the West as well. The official name of the app is currently unknown though the rough Japanese translation calls it God App Neptunia.

Before you get too excited, this app is not an actual game in and of itself, but as you can see from Compile Heart’s official website for the app, it is actually an app that lets you interact with Neptune and Noire, two popular characters from the series. As the player uses the app, Neptune and Noire will say different things and give them special messages on certain holidays. It is also possible to use the app as an alarm clock and a picture mode has also been revealed. Currently it is unknown how much the app will cost or when to expect it, but it certainly is a strange little addition to the Neptunia line-up but one that fans will be all over.

Hyperdimension Neptunia Re;Birth 1 is a remake of the original with complete overhaul