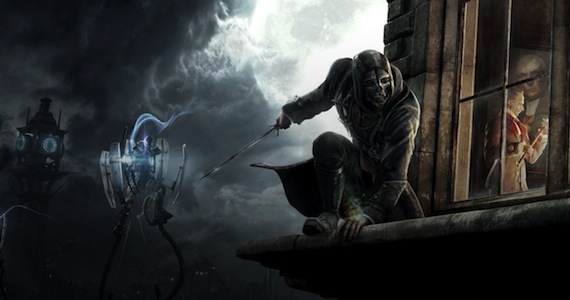 Here at Capsule we got a chance to give the new stealth-adventure game, Dishonored, a go and explore the old-yet-new world of Dunwall. We were given a chance at a stage that happens around the middle of the game, where you have to break into a party full of rich people, have a duel, and suss out who your target is and either dispatch her or let her escape.

The gameplay is pretty straight forward, and the game wants you to be stealthy in your approach rather than go around stabbing people in the throat. You can definitely try it, but unless you get really good at evading the chasing guards, you’ll probably end up killed. The most interesting element of the game is that there are a few ways to approach it, when you break into the house there are many ways to do it, with the standard creep along the walls and avoid guards, or even possessing other people (or animals, which is absolutely great fun and so useful) and going through like that. While guards are usually bumbling same-faced jerks who you can’t help but stab from the darkness, Dishonored also have these guards called ‘tallboys’ which are guards on high-powered stilts that make you want to hug the shadows even more. Nothing like a guard with the ability to fire missiles at you to encourage the stealth approach. 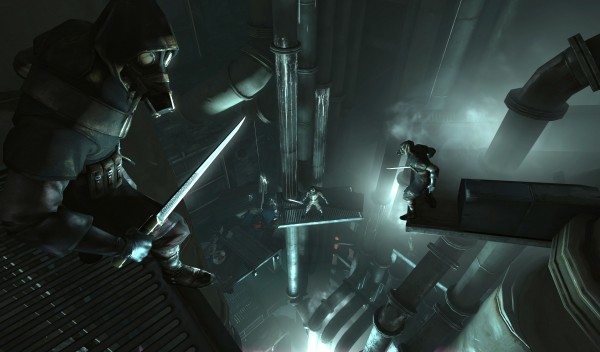 To help you out you also have special abilities, and thankfully we were placed at a stage in the game when he had all these fancy powers at his fingertips. Favourites, not only with us, but with Dishonored’s Executive Producer Julien Roby, are Blink and Posession.

Blink gives you the power to teleport short distances in front of you, which can be super handy if you’re trying to get yourself out of trouble. Posession was definitely my favourite, because there are just so many fun things you can do with it since you are not only possessing someone else, but your whole body seems to go into theirs for that amount of time, until you’re done or the spell expires and you are violently ripped back out. It unlocks so many doors that you wouldn’t usually have access too, being a small vermin animal definitely has its perks when there are a bunch of tallboys hunting you down. There is also the ability to slow down time, which does come in handy, but is nothing new to most games with powers.

There are some choices that you make within the game, though I’m not sure how far the consequences of those decisions reach, but this follows the trend that most games are taking with the whole moral choices. Of course with a game that is titled ‘dishonored’ it sort of encourages the less honourable choices to be made. 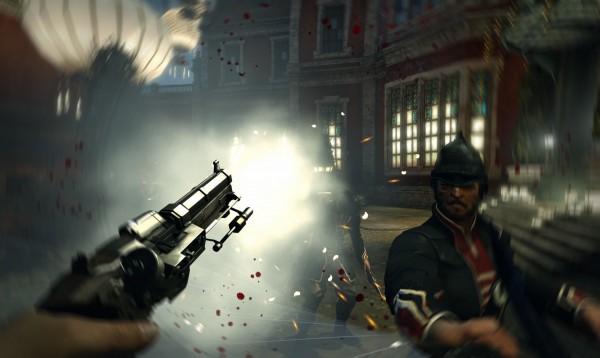 The abilities/weapons on the different hands is reminiscent of Bioshock, but it will take a bit more to get used to. In one example, I was having a duel (which is as cool and old school as it sounds) and I was given a pistol, which was held in his left hand because I guess my character liked to keep his knife hand for knifing, and when it came to crunch time instead of shooting the other guy I knifed the air. Because the left hand is controlled by the left trigger, and the right hand by the right trigger. Which sounds logical now, but when your automatic reaction to shoot is to pull the right trigger, well it might get a bit awkward.

All of that aside, it was great fun, had a really interesting storyline and the degree of freedom while still being a straightforward game means that there will be a degree of replayability not present in other games.

Dishonored is coming out on PC, Playstation 3 and Xbox 360 on October 11, 2012. For more information on the game keep tuned to Capsule Computers and make sure to check out our interview with the Dishonored Executive Producer Julien Roby.

The Evil Within Gets Unsettling with TGS Trailer